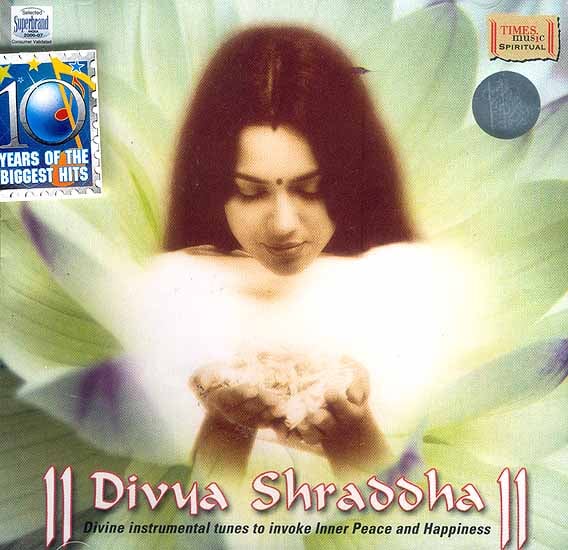 Divya Shraddha is the fifth album in the Shraddha series from Times Music. Shraddha, an instrumental album, introduced new compositions of popular, much-loved Bhajans. Truly a sublime rendition of our prayers in music. Param Shraddha traversed similar grounds but classical raags frequently used in bhajans and kirtans. Atma Shraddha, yet again, explored the underlying theme of devotion, meditation and salvation through will-known spiritual and devotional compositions of ancient and modern times. Whilst Sur Shraddha celebrated the divine through popular devotional compositions, mostly from Indian films.

Divya Shraddha continues the theme of bringing the best of traditional and popular devotional music to help realize the divine within.

Ashit inherited music as a legacy that gradually grew to become his passion. A short period as an assistant film music director to Jaidev, was followed later by his long association with Pandit Ravi Shankar as principal vocalist, music arranger and director of his orchestra. His repertoire has flourished wide and deep.

Though his music is firmly rooted in tradition, his compositions augment the melodies with creative variations within the broad framework of the poetic mood being evoked.

As a composer, he tackles difficult themes with effortless ease lending a masterly touch to his work. He has scored dramas, dances, ballets, serials and numerous albums. He also sang devotional songs for the film 'Gandhi', each revealing the man behind the music. In the last three decades, Ashit has crafted rich and varied body of work, yet his musical talent flows unabated.
So much done, so much yet to do...