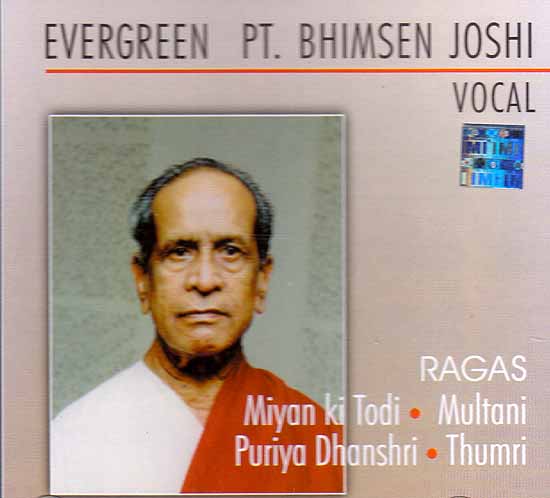 Music or any other art is necessarily evolutionary and change is an inseparable part of any evolutionary process. However, a true artiste remains inalienably faithful to the foundation which provides him strength and inspiration to forge ahead in his quest of excellence.

All this and more sums up the multi-splendoured contribution of Pandit Bhimsen Joshi to the enrichment and propagation of Hindustani music. Not without reason does the maestro remain the numero uno among today’s Hindustani vocalists.

Under the guidance of his guru SAWAI GANDHARVA, he assimilated the very quintessence of the singing genre, known for its sweetness of tone, its relaxed freedom in the treatment of melody and, above all, its intensely emotional content.

But evidently, Bhimsenji did not want to rest content with his Kirana gharana heritage. Endowed as he was with an amazing susceptibility to assimilate and absorb all that is authentic, pure and elevating in other genres of khayal music, he benefited from direct and indirect guidance from many stalwarts of his time.

The result is the emergence of a vocalism which can well be described as “Bhimseni gayaki”, at once personality bound and therefore inimitable, in which the significant vignettes of his Kirana foundation remain visible.

The repertoire enshrined in this album provides resounding testimony of Bhimsenji’s eminence as a non-pareil Hindustani vocalist.

Raga Miyan ki Todi is a time-honoured yet perennially popular Raga.
It is designed to depict effectively the mood of sadness and pathos, accentuated by a feeling of separation. The rage omits pancham (fifth note) from its aroha (ascent), while avaroha (descent) takes all the notes of the octave (sampoorna).

Convention assigns its rendition to the late hours of the morning. The vadi (sonant) and samvadi (consonant) notes are, respectively, dhaivat (sixth note) and gandhar (third note).

The melody, heard next, is Multani, known to evoke a mood of anticipation, not unmixed with motivations of pensive melancholy. This is one of the few ragas associated with the late-afternoon hours (between 11 and 4 O’clock). In technical structure, the raga omits rishabh (second note) and dhaivat (sixth note) from its aroha (ascent) but takes all the notes in avaroha (descent). Pancham (fifth note) and shadja (first note) are, respectively, the vadi (sonant) and samvadi (consonant) notes.

The third number of the repertoire - Raga Puriya Dhanashri, is also a time-tested melody, which is still popular with artists and listeners alike. Associated with the pre-dusk hours (between 5.30 and 7 o’clock), Puriya Dhanashri is designed to convey a placid, somber feeling that captures the mood of the hour.

Structurally the raga takes all the notes of the scale although their sequence is at times oblique (vakra) in both aroha and avaroha (ascent and descent). Gandhar (third note) or pancham (fifth note) is regarded as the vadi (sonant) note. Correspondingly, nishad (seventh note) or shadja (first note) is taken as samvadi (consonant) note. In either case, the innate charm and appeal of the melody remains unaffected.

It is a thumri number, set to dadra taal, which consists of 6 matras (beats), that provide a touching finale to the fare. Thumri as a musical form, is freer than khayal and carries a lyrical and romantic flavour.