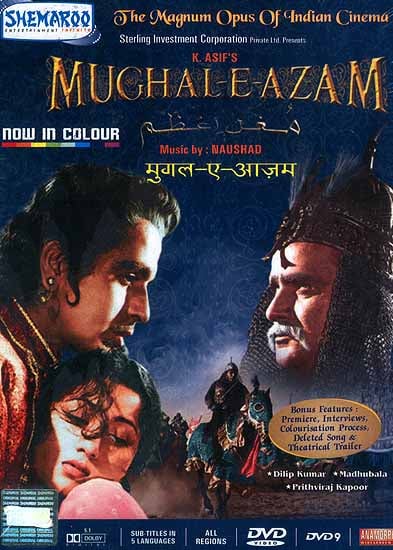 Recreating this saga of epic proportions was something directors had long given up on. India can never imagine another Salim or another Anarkali. Such was the impact of Mughal E-Azam - The Magnum Opus of Indian Cinema. 60 years later, a dream challenged technology in post production to fill the extravagance with colours. And to behold! The legend was born again.

Colours brought to life the tale of the doomed love affair between the Mughal Crown Prince Salim and the beautiful, ill-fated court dancer, Anarkali. A love whose fervor and intensity perpetrates a war between the prince and his father, the great Mughal Emperor Akbar, and threatens to bring an empire to its knees.

Immense talent sand the magic of technology came together to create this work of art. A first of its kind in the entire world, Asif’s unfinished agenda was completed. Mughal-E-Azam was released in colour.

Bonus Features The Grand Premiere: When the New Mughal-E- Azam was unveiled. Stars Speak: Eminent personalities speak about this epic saga. How it Happened: Colourisation Process - The technology behind the making of a dream. Deleted Song-Humhe Kaash Tumse. Theatrical Trailer.