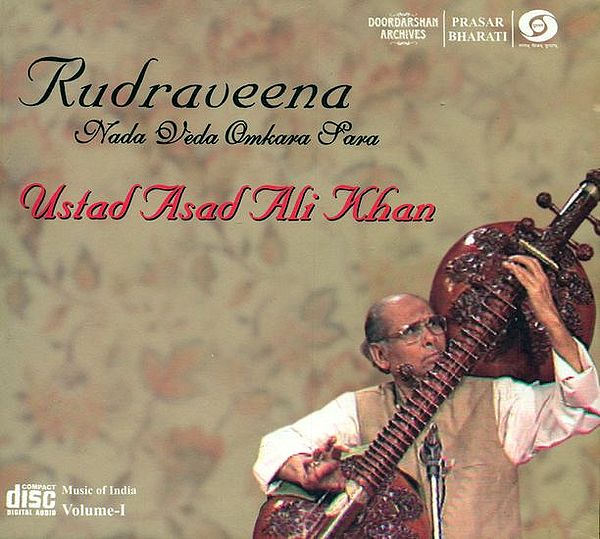 The Rudra Veena, as the name implies, is associated with Lord Shiva; it is a difficult instrument but a perfect means to measure and weigh the principles and grammar of our Dhrupad style of music. In Rudra Veena has a place of reverence our Shastras. It is believed that Lord Shiva looked at Parvatri's face and created this instrument: It is the first ever string instrument known to mankind, bestowed upon mortals by Lord Shiva himself.

Originally, the Rudra Veena had strings made from animal guts, the present metal strings being a later development. The very first Veena had only one string, and is referred to as Ektantri Veena. When the second string was added, and it became Dwitantri Veena, then the Third string also got added and it was called Tritantri Veena. The addition of the Fourth made it Chatusra Veena. Additions and innovations continued to make this instrument grow as a fine medium for producing great music.

In my family we have been playing this instrument for many generations. Even the making of the instrument needs a musical mind and a well-tuned ear; for example, even today I set the frets in wax and check the quality of sound and tuning along with the craftsman to get a perfect end product. According to the Shastras, the first ever disciple of Lord Shiva is Devarashi Narada, who also plays the Rudra Veena, which is thus also called Narad Veena. There are others also wheo lend their names to this instrument - Parvati Veena, Sar Veena, Saraswati Veena and so on and so forth. Rudra Veena is the most popular name and it is said to be a form of Shiva himself, The Veena which is played in South India is known as Saraswati Veena. Rudra Veena is played by resting the instrument on the shoulder. There is another popular name for this instrument: "Been". The instrument used by the snake charmers is not the Been, which is actually another name for the Rudra Veena. Beenkar thus means one who plays Rudra Veena. The snake charmer's pipe is known as Pungi. Amir Khusro also refers to Rudra Veena as Been and has called it 'Meezan-E-Mausiqui'. This means Rudra Veena is a measuring instrument for perfect music. This is a balance in which grammar and principles of music are measured.

Now I am going to reveal a major secret to you. You must be wondering why this instrument is played by resting it on the shoulder. When it is tuned while resting on ground, the sound is somewhat different. Those who understand music, who are trained to hear micro sound, will recognise the difference. Chikari has been tuned to the Tanpuras, but one string is producing a slightly higher sound: This string tuned to Shuddha Madhyama is common in all string instruments. Rudra Veena has also given the method of tuning to all other string instruments, like Sitar, Sur Bahar, Sarod and Sursingar. In all these instruments the main string is tuned only in Shuddha Madhyama. This string in Rudra Veena seems to be higher than the required level while it is placed on the ground. Now, when I rest the Veena on my shoulder and it is fixed against the body, it is controlled by the body, the string which was seemingly at a higher level gets tuned to perfection. Thus this instrument is closely related to the body, so that to get perfect tuning it has to be played by resting it on the shoulder. You have almost to wear this instrument and make it part of your body! The Rudra Veena must also be held this way while sitting on the Vajrasana. With the instrument held so, one has to acquire total control over breathing by constant practice, so this is almost a Sangeeta Yoga.

If this Veena is played like Saraswati Veena by placing it on the ground, one cannot play the specific Angas of Dhrupad style, like Bidar Ang, Gamak Ang, Gamakjod etc.

There is a gold-painted Veena in the Alwar Palace Museum that resonates to the music of a glorious tradition of Beenkars that goes back seven generations to the eighteenth century; a tradition that is today enshrined in the sonorously stringed splendour of Ustad Asad Ali Khan's Rudra Veena.

Ustad Asad Ali Khan, the wizard of Rudra Veena, represents the famed Beenkar Gharana of Jaipur in Rajasthan. His ancestors were royal musicians of the princely state of Jaipur, which has always been a great patron of Indian Classical Music. The reign of Maharaja Ram Singh II (1835-1880) was witness to the brilliance of numerous instrumentalists, vocalists and dancers who thrived under the patronage of the Maharaja. A star amongst them was Ustad Asad Ali Khan's great grandfather, the Beenkar Ustad Rajab Ali Khan, who also had the privilege of being the music guru of the Maharaja himself. It is not surprising therefore to find an account of Ustad Asad Ali Khan's family in the historical texts of Rajasthan.

The Beenkar tradition of Ustad Rajab Ali Khan was carried forward by his nephew, Ustad Musharraf Khan who became a famous court musician in the neighbouring princely state of Alwar in Rajasthan. With his performance in London in the year 1886, Ustad Musharraf Ali Khan became one of the earliest Indian musicians to perform in Europe. At that time his son Sadiq Ali Khan was three years old. Ustad Sadiq Ali Khan (1883-1964) grew to become a brilliant exponent of the Rudra Veena, and after his father's death inherited his father's position in the court of Alwar. He subsequently moved to the royal house of Rampur to become the court musician of Nawab Raza Ali Khan.