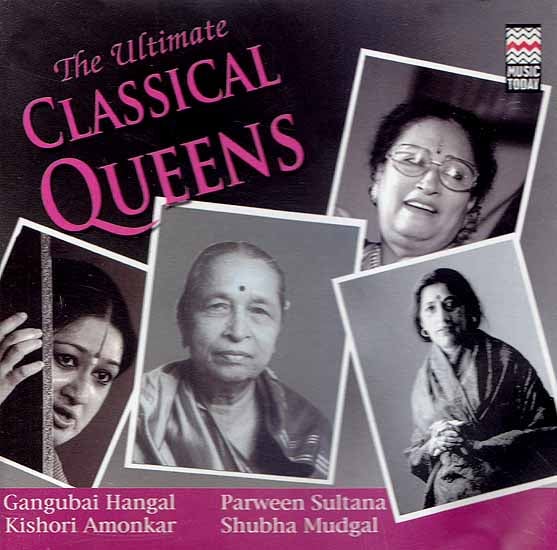 The Ultimate Classical Queens is a double CD album featuring the four popular and leading female maestros of Hindustani classical music. It presents the best tracks of the female classical vocalists –Gangubai Hangal, Kishori Amonkar, Parween Sultana and Shubha Mudgal, who have dominated the world of male-oriented classical singing through their unique and powerful vocal styles.

Gangubai Hangal The doyen of the Kirana gharana, Gangubai Hangal is among the world’s oldest performing classical vocalists. She was born in 1913 to a family of hereditary courtesan musicians from Hangal, a small village near Dharvar in North Karnataka. She was trained in Hindustani classical music from the Kirana gharana master Sawai Gandharva, to whom she owes her musical talent as well as cultural and linguistic heritage. Her powerful voice carries the expression of authentic, tradition classical music and is testimony to relentless riyaz and unstinting dedication to music. Her concert career spanning over five decades, makes her one of the senior most performing artistes in the world today. This early journey started by performing at local celebration and the Ganesh Utsav in Mumbai when she was just in her teens. Her music has a quality that is radically different from other artistes.

Kishori Amonkar was born on 10 April 1931 in a family with a rich background in music. Her mother Mogubai Kurdiakar, an excellent vocalist from the famous and the oldest Jaipur-Atrauli gharana, initiated Kishori Amonkar into music when she was as little girl. The promising child grew up while following a strict regimen of rigorous riyaz. By the time she matured into a vocalist, she had fully imbibed in her singing the special features of the gharana.

Kishori Amonkar’s effortless singing in a rich and mellifluous voice has always been her audience’s delight. There is a beautiful blend of swara & emotions appropriate in the renderings of the ragas. The unique features of her gharana are distinct, especially her bol taan-s and the phirat taan-s. true to the tradition of her gharana, she retains the purity sung light classical compositions such as Hindi, Marathi, Kannada and Sanskrit devotional songs.

Kishori Amonkar is a vocalist par-excellence and is popularly known as ‘Gana Saraswati’. A highly honoured artiste she has been the recipient of the Sangeet Natak Academy Award, the Padma Bhushan and the Sangeet Samragni Award.

Shubha Mudgal Born into a musically dedicated family of Allahabad, Shubha Mudgal received her initial training from Pandit Ram Ashreya Jha under whom she continues to study. She has also learned from Pandit Vinay Chandra Maudgalya and Pandit Vasant Thakar. Smt. Naina Devi taught her the intricacies of thumri, dadra and other allied forms. Later, Shubha ji went on to learn other stylistic techniques from Pandit Jitendra Abhisheki and Pandit Kumar Gandharva. Through trained basically in the Gwalior tradition, she has absorbed diverse music influences. An A grade artiste of Radio and Television, she has performed in several music festivals in India and abroad & has also been awarded the Padma Shri by the Government of India.

From an early age her father took her to music festivals and encouraged her to follow her instincts for melody. She debuted on stage at the age of nine. In 1965 she recorded her first EP to EMI India, and in 1967, at the age of just 17 recorded her first LP for the same label. She married Dilshad Khan on August 26, 1975. Since then they have each pursued solo careers parallel to their duo work. Originally trained according to the patiala gharana, Dilshad Khan’s guidance in the Kirana gharana style has helped the real essence of other styles, through the influence of specific gharanas, to flow into her music. Apart from her excellence in classical music she has also enjoyed great success in the Indian film industry; her singing includes all time hit soundtracks of films such as Kudrat and Pakeezah among others.

She has been awarded several prestigious titles including the Gandharva Kalanibhi, Miyan Tansen award and the Sangeet Samraghi award and has been the youngest performing artiste to receive the presidential award of Padma Shri in 1976. Her voice which spans three-and-a-half octaves has been compared to the rabab, an ancient Persian string instrument.