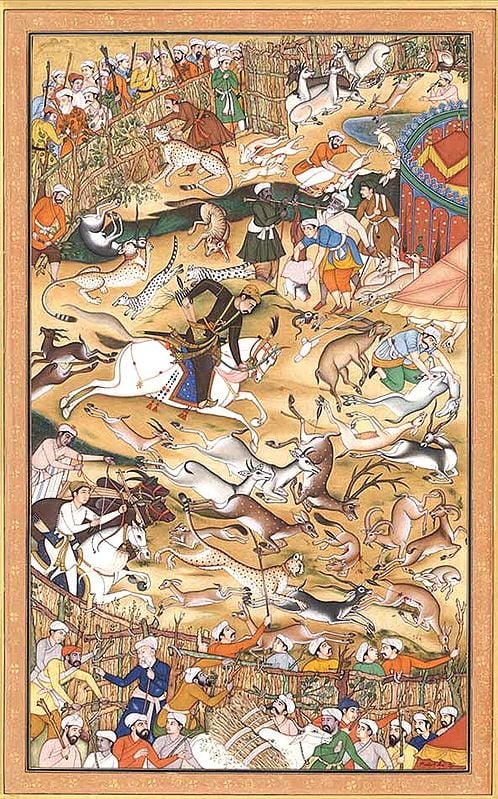 Akbar Hunting (folio from the Akbar-nama)

FREE Delivery
$956.25  $1275   (25% off)
This item can be backordered
Time required to recreate this artwork
8 to 12 weeks
Advance to be paid now
$255 (20%)
Balance to be paid once product is ready
$1020
Notify me when this item is available
This folio from Akbar-nama, a re-presentation of Mansur's great nature study, depicts Akbar hunting. Exact adherence to Akbar's likeness and to the likeness of animals available then makes the painting a record of history and a treasure of universal significance. This painting has all tones and touches of the art of Mansur who excelled all artists of Akbar's court. Not only every human eye painted here tells something or each man's face is charged with great emotionality but also the face or rather the entire being of an animal portrays on it as truly and powerfully a mighty emotion, the fear of death or the love for life, pity, dismay or whatever. Such spirited study of the fleeing deer, their bodies attenuated and muscles tensed in flight is simply unparallelled in the history of art and could be the work only of a master artist. Looking for an artist of this height in history the viewing eye is led back to Akbar's days to discover there Mansur, medieval world's one of the best artists, busy in transcribing the story of Akbar's hunt in his colours and lines. The modulation of the tones in soft greys and browns could emit only from Mansur's brush and he alone could work in monochromes to such advantage as is seen here. The painting thus reproduces Akbar, his days and the nature of those days with Mansur's eye and with as powerful strokes of brush as were of the great master.

With Mughals organised hunt was a kind of routine festivity occurring at least once a year or more frequently but the hunt depicted here was not part of such routine.The event occurred when Akbar was completing twelth year of his ascendance. According to Tarikh-i-Alfi it was so massive that 50 thousand men were deployed to accomplish it and that a hunt of this level was never repeated.. The entire area from hills on one side and to river Jhilum on the other was divided into sectors and each sector was put to the charge of one accountable officer. Birds and animals were to be driven from all sides to the centre of the arena which was enclosed with the help of wooden barricades. In the middle of the arena emperor's royal pavilion was set. A ring was created for cheetah tamed and trained for hunting. The periphery was manned by armed personnels. When the expedition began cheetah were let loose to charge at animals driven there. Cooks were alike ready to skin the prey for cooking so that immediately after the expedition was over, the feast could be provided. Bullock carts too were in readiness for transporting the hunt to the capital.

As per limitations set by the canvas the action has been compressed into an area encircled by barricades but exactly as described in Akbar-nama. Akbar, the great Mughal emperor, riding his white horse is seen charging at animals gathered in the arena, the black buck, barasinghah, nilgai, spotted gazelles, jackals, foxes, rabbits and many more. The arrow shot by the emperor hits a barasingha. Pain bursts out it open mouth and fear makes it flee but only to collapse. Akbar's figure is bent obviously in concentration over his kill. The details contained in the text have been carried out in this painted version with as much exactness. Border of the painting is as much powerful. The use of gold is simply lavish though not a streak of it has been used in the painting. This was obviously due to Akbar's pronounced preference for simplicity.