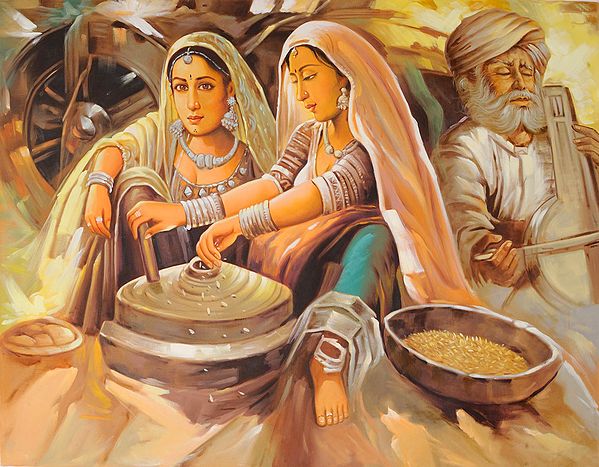 A magnificent painting on canvas rendered in oil, each stroke of brush bursting with glow and energy, large in size and far deeper in delighting the mind by its aesthetics and naïve simplicity, portrays a family of Banjaras, a nomadic tribe of Rajasthan known for the rare beauty of its women and men. The colours used in the painting are not bright but warm glowing like a subdued fire bursting from behind the wood piled in a hearth. The painting portrays three figures, one, the family’s head, an elderly male with silvery beard and moustaches – the gold-skinned handsome grand old man playing on a lyre, and the two young ladies, perhaps his daughters-in-law, one a bit elder to the other but both in their glowing youth and both exceptionally beautiful with skin glistening with gold’s lustre engaged in household things. The painting documents just three figures, it is, however, the portrayal of an entire family consisting of at least six members, three others, the husbands of the two women, and their mother – the old man’s wife, being out for work. As suggests the type of the two women’s ornaments, the auspicious forehead marks and rings in the fingers of feet in particular, they both are married; obviously, their husbands are away for work. As a woman’s presence always generates a client’s confidence they work for at least one of the women of the  family – preferably an elderly one, accompany the males, a practice prevalent among all nomadic tribes. Not merely the faces or figures, the painting documents an entire lifestyle. It further attests that among all nomadic tribes, perhaps for protecting them from evil minded outsiders, the family’s younger women keep to their settlement under some elderly man’s supervision and often the family’s mother or a motherly woman accompanies the males to work.   Though with minimum needs, Banjaras, as also other tribes, are not only self-sufficient but also the most accomplished people. The painting, primarily the portrayal of glowing beauty of the tribe’s women and handsomeness of tribe’s men, even old and grey-haired, illustrates some essential aspects of Banjaras’ life. A simple cart in which they move from one place to other is their home, wedding chamber, maternity home, store, workshop and their entire world. An essential component of their life the artist has painted a cart in the background, the cart’s wheel alone being visible. In their paraphernalia they also carry along them a domestic flourmill – two simple stone discs, one fixed while the other rotating over it; the upper one provided with a mouth for feeding the grain to grind, and a handle, for rotating it. With her right hand the younger lady is moving the mill while, with the left, feeding grain. A deep tray containing corn, and another, containing some eatables, are papier-mâché articles of day-today use. Light in weight and hence convenient to carry, as also the material re-usable, these utensils made from recycled paper waste are examples of their skills and craftsmanship. The painting as truly documents the cultural side and the finer aspects of the tribe’s life. Fully absorbed forgetting the world around the old man is playing on his lyre – an altogether different face of the nomadic life. Besides most accomplished anatomy – good height, perfect health and figural balance, the artist has conceived his two female figures with fine features – well-defined sharp noses, brownish dreamy curling eyes and chins aligning perfectly with cheeks. The old man clad in white has as sharp features and as perfect a figure. In portraying its figures, their ethnic character, inherent beauty, life style, strangeness of costumes, the style of ornaments … the artist has adhered to his subjects’ tribal link though himself a contemporary mind he has infused into their bearing also a bit of discontentment or non-acceptance of the way of life they are in. The old man’s absorption as reflects in his closed eyes is born of his inner contentment and the melody emitting from his lyre’s strings; this is not, however, the case of the two women. The younger one holds the flourmill’s handle but seems not to be moving it. She has picked a handful of corn but forgetful she lets it slip off to scatter all over. The same pensive mind reveals in the eyes of the other woman. Even her sitting posture – one of the legs raised and folded down to the knee, and the forearm resting over it, reveals her thoughtful mind. The jewellery items – ‘hansalis’ or neck-rings, bangles, anklets, ‘karna-phools’ or ear-ornaments, made of solid silver and rare in their ethnic character, glow with the two women’s golden glow. 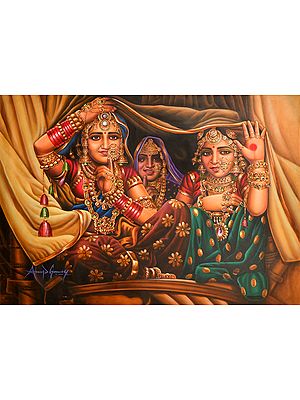 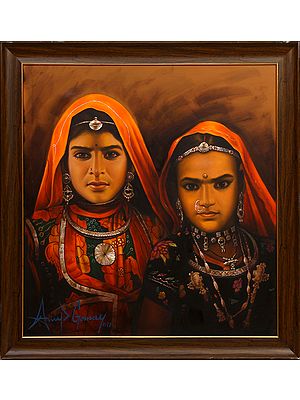 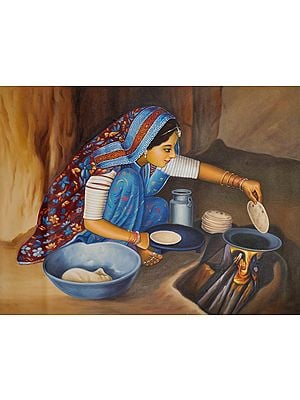 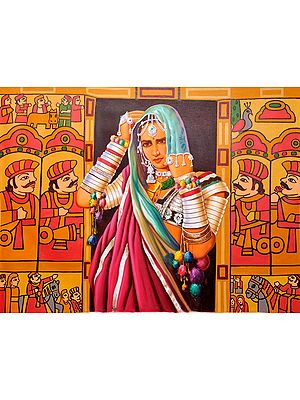 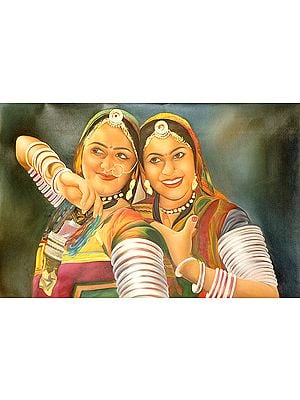 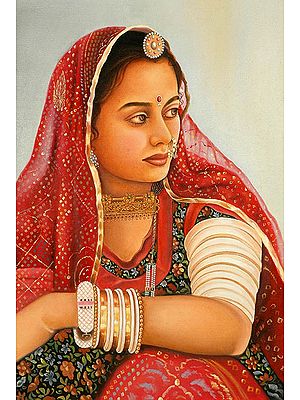