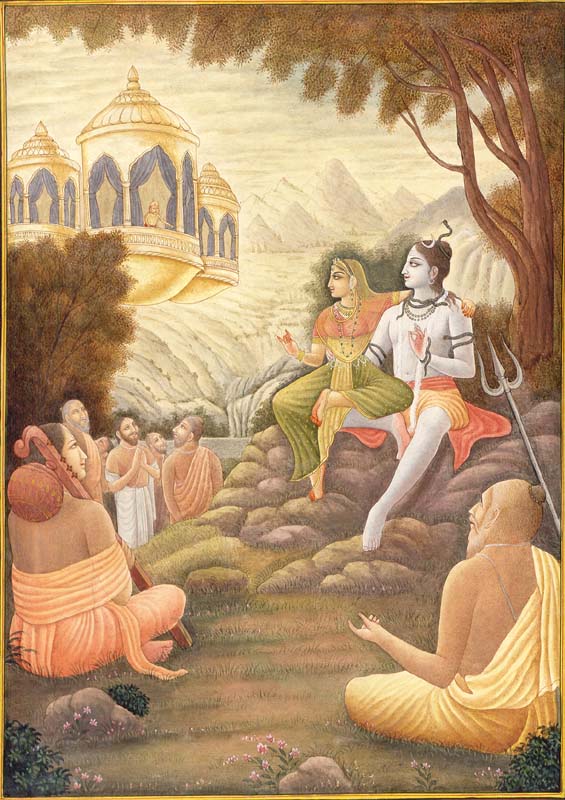 Lord Shiva Awaiting Tripura to Join with Each Other

$105
Quantity
Notify me when this item is available
This excellent painting records a scarcely known aspect of one of the best known Indian legends, the annihilation of Tripura or the three cities, ruled by a confederation of demons, consisting of Taraksha, Kamalaksha and Vidyunmali, the mighty sons of Tarakasura. Incidentally, it also makes known the little known but greatly significant aspect of Maheshvara, on the bank of Narmada, one of the twelve Shaivite Pithas of India yet in live worship and visited by lacs of pilgrims every year. Lord Shiva, seated with Parvati on the rocks around Narmada at Maheshvara, is watching the moment when the three cities united and he was able to annihilate them together in single stroke. Around them are seated various sages including Muni Narad who has special relevance in the legend.

The legend of Tripura-samhara, or the annihilation of the Three Cities, appears in a number of Puranas but more elaborately in Bhagavata and Padma Purana. The great sage Kashyapa, the grandson of Prajapati Brahma, had a number of wives, of whom two, Aditi and Diti, were more important. All gods were born of Aditi and all demons of Diti. The quarrelsome demons always inflicted atrocities on gods. Ultimately all gods united and fought against the demons. In the battle, one of the demons' leaders Tarakasura was killed by Subrahmanya, another name of Shiva's son Karttikeya and the commander of gods' army. Tarakasura's three sons, Kamalaksha, Taraksha and Vidyunmali, for seeking Brahma's boon for avenging their father's assassination, engaged in severe penance and compelled Brahma to appear and grant them the boon of immortality. Brahma agreed to grant any thing other than immortality. They thereupon wished to have three cities, one for each of them, to rule independently and that they should never be killed singly. If they ever died, they should be killed together and by a single arrow. The three cities should be built far off from each other but might roam at will and be allowed to unite with each other after every thousand years. Brahma granted the boon and ordered Maya, the demon architect, to construct for them the cities as desired. Accordingly, one city was constructed in Svargaloka, the second in the sky and the third on the earth.

The near immortal Demons-Trio were highly atrocious making the life of all living ones, gods, human beings and animals, miserable by their wicked deeds. Finally, the gods and sages approached Shiva for annihilating the three cities and their demon owners. Shiva assured them to accomplish their desire. This, however, required a lot of preparation and also a period of a thousand years to let them unite, for unless they were together and three cities had united he could not annihilate them in single stroke. To make his preparations unnoticed Shiva with Parvati abandoned Mount Kailash and came down to Maheshvara where on Narmada's bank he made his seat. Sage Narad was deputed to visit the Three Cities and try to seduce the women folk by describing gods' inciting beauty. On the other hand, Shiva manufactured a bow of the Mount Mandar, its string of the great serpent Vasuki, an arrow of Vishnu himself, its tip of Agni and its end of Vayu. The earth herself became his chariot and the four mighty gods were to pull it. Lord Brahma was his charioteer.

The painting depicts Shiva seated with Parvati, both carefully watching the Three Cities, symbolised by three domed kiosks floating in the sky, getting closer. By the gesture of his fingers, it seems, he is calculating the exact moment to strike. His mighty trident lay on his left. The enrapt Narad looks at him with eyes filled with amour and admiration. The granite rocks, Shiva is sitting on, river's torrential current and the entire topography aptly define Narmada around Maheshvara. It is a unique event dismaying gods unable to decide whether they should look at Shiva or at the Three Cities drawing close to each other. The artist has shown great skill in drawing the faces of his figures, full faces, half and even one fourth. Parvati seated on right side is quite unusual. Soft tones of fast colours create their own mystic effect.