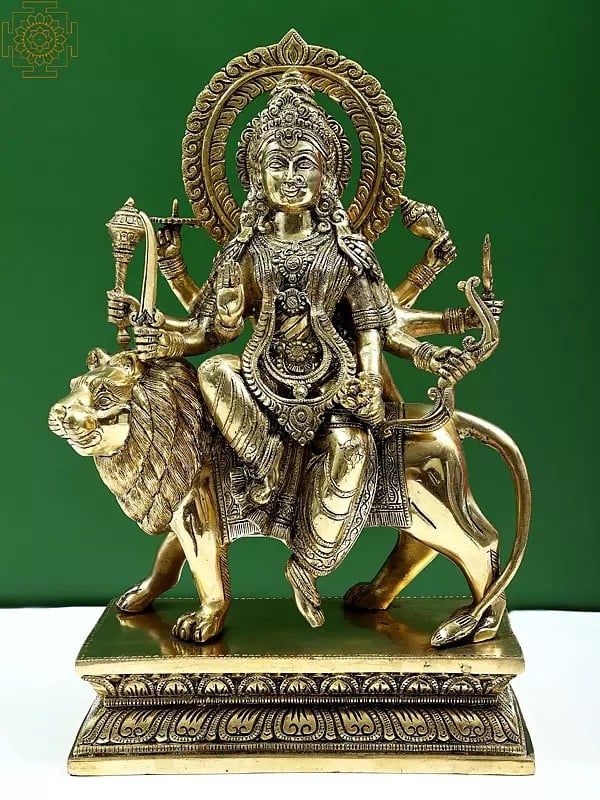 Devi Durga Sherawali Maa is worshipped in the Dharmic traditions as the goddess of strength. If Lord Shiva represents power then Devi Durga is the expression of that power. Hence she is also called Adi-shakti, a personification of the primal power that drives the universe. She has eight arms signifying her absolute command over the eight different directions. In her hands, she holds both weapons of destruction and flowers of peace, indicating her dual status as fierce feminine, both a nurturer of the good and a savior from the evil, be it external or internal.

This beautiful brass artifact of Devi Durga Sherawali Maa is an expression of that divine positive energy that drives away negative forces from your home or workspace. It is crafted in a traditional and uniquely elegant style characteristic of the Ancient Indian sculpting traditions. Devi is Kalyan mudra, blessing humankind, extending her protection against the disruptive forces running loose out there in the world. Praying to her is a potent source of courage. She radiates energy, enabling you to deal with the worst worries the world can throw on your unwary being. Brass idols are known to create positive vibes in the space they are kept in, besides being strong, durable, and corrosion-free. They are easy to maintain and are ideal artifacts to be placed, either in your home or in your workspace. Keep the statue clean and dirt-free, to ensure that showers of blessings and blissful sprays of positive energy keep coming your way, ensuring unparalleled success in all the different spheres of your life.