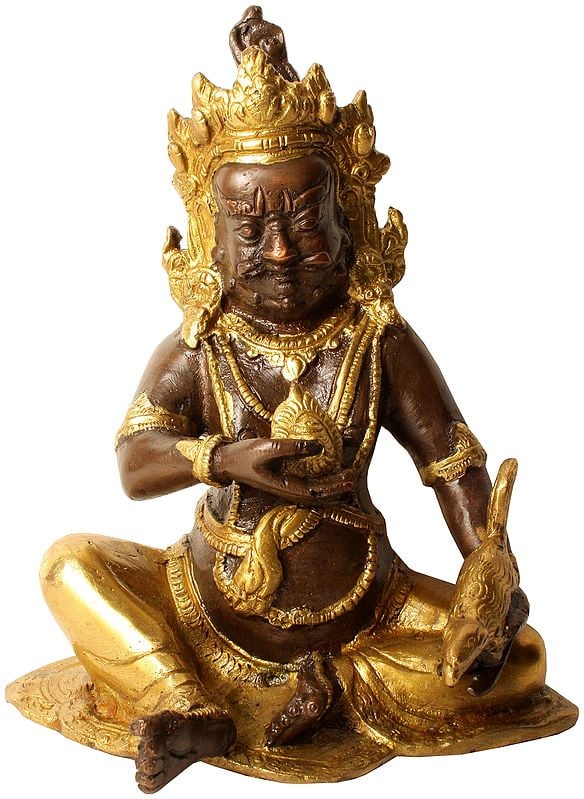 The Dharampala Kubera is revered as the king of Yakshas (nature spirits) and the god of wealth, associated with all the treasures like minerals and jewels that lie underground; often depicted as a dwarf and is opined to be Ravana’s half brother, as he once ruled Lanka. This semi divine being is described as the chief of evil spirits in Vedas, but the Puranas and Hindu epics extol him as a deva.

This deity, here sits in a distinctive posture on a thin randomly shaped pedestal, in a lotus leaf hued skin tone and garbed in a shiny and smooth golden dhoti that compliments the heavy gold jewels veiled all over his body and the traditional Tibetan styled gold crown.

As always, he is portrayed as a plump man, with a large paunch and the realistic fierce expressions capture his face mask. This sculpture represents Kubera’s undistinguished Tibetan form, having two arms with the right one holding a sheaf of jewels and the left holds a mongoose or Nakula.

Free delivery
This sculpture represents Kubera or Vaishravana, the god of wealth. Kubera is also known as Jambhala in Southern Buddhism as in some manifestations, he holds Jambhala (lemon) in one of his hands. Here he is seated in an easy posture and holds a jewel in his right hand and Nakula or mongoose in his left hand. He has a ferocious look, bulging eyes, blazing eyebrows; his moustache and beard is made of hook-like shapes. He wears five-lobed crown, with jewel in centre, earrings, necklaces, armlets, anklets and serpent jewelry.

According to Hindu tradition, Kubera was the son of a sage, Vishravas, hence he is also known as Vishravana or Vaishravana. It is said that Kubera performed austerities for a thousand years, Lord Brahma in reward gave him immortality and made him god of Wealth (Nidhipati), guardian of all treasures of earth, which he is to give out to whom they are destined. The abode of Kubera was Kailash, when Brahma appointed him God of Wealth, he gave him Lanka as his capital and presented him Pushpaka Vimana which was of immense size and moved at the owner's will at marvellous speed. Later on Kubera's brother Ravana seized Lanka and Pushpaka Vimana from him. Kubera then made his abode in mount of Kailash in Himalaya.

As mentioned above, Kubera is also worshipped by the Buddhists, and he is one of the Lokapalas, guardians of Mount Sumeru, centre of Universe; as well as one of the Regents of the Four Cardinal Points. As a Regent of North, he is called Vaishravana and his abode is in Alaka, in the Himalayas, abounding in wealth and magnificence, where he is attended by Yakshas and Kinnaras. The cult of Kubera is also popular in Nepal, Tibet, Mongolia, China and Japan where he is called Bishamon. Though Kubera carries many attributes - a sword, a banner, a lemon flat vessel etc, but his most common attribute is mongoose symbolizes Kubera's victory over Nagas, sometimes mongoose is merely a bag made of its skin. He is always to be fat and pot-bellied in appearance.

In Tibet he has been worshipped as one of the primarily protectors of the Gelugpa sect since the fourteenth century. He has two main aspects, that of a warrior protector and that of god of wealth. It is believed that performing prosperity rituals to Vaishravana will increase wealth. There are many forms of Kubera, the present one he has been depicted as the god of wealth and his shakti is Vasudhara.As a god of wealth, he is holding a jewel and mongoose. When Kubera presses the two sides of the mongoose it vomits the treasures within. In Tantra he plays an important part. It is said that the tantra of Vaishravana as god of wealth was taught by Shakyamuni Buddha and it was translated into Tibetan language in the eleventh century by Zangkar Lotsawa who came from Zangkar in West Tibet. In the thirteenth century, the teachings passed to the noted scholar Buton Rinchen Gyaltsan, on this the history of Vaishravana is based.

In popular Buddhism also the cult of Kubera or Vaishravana is popular, devotees made their purses and bags in the shape of Nakula (mongoose) as it is considered auspicious. This fine sculpture is very much suitable for altar for the practice and ritual of Kubera, lord of treasures.

This description is by Dr. Shailendra K. Verma, whose Doctorate thesis is on "Emergence and Evolution of the Buddha Image (From its inception to 8th century A.D.)".