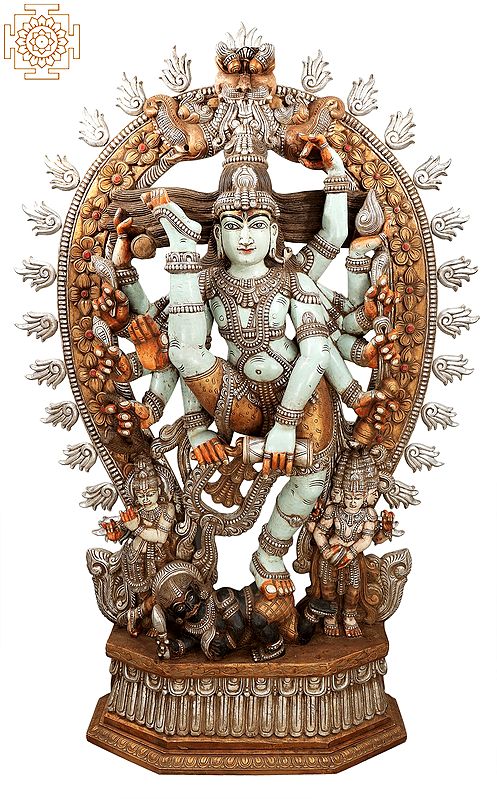 The blissful beauty of urdhavatandava, carved in wood and finished in a varied colour palette. As opposed to the rudratandava of Shiva, urdhavatandava conveys a gathered serenity. The murti that you see on this page depicts Lord Shiva amidst His urdhavatandava. The left foot presses down upon the back of Apasmara, while the right foot is raised along the front all the way up to His own head.

A rare image of the dadashabhujadhari (the one possessed of twelve arms) Shiva. The Himalayan ice complexion of His body, set off by the shimmer of the tigerskin around His loins. Dense dreadlocks of a washed out colour that flies about His face as he motions. The anteriormost hands He gathers at the base of the raised leg as He cups the damroo. Note the contrast of Apasmara’s form, the avidya-roopi one.

At the base of the flame aureole (prabhavali), flanking Apasmara, are the figures of Lord Krishna (Vishnu-roopa) and Lord Brahma (multi-headed) to the right and the left of Shiva, respectively. The presence of the complete trinity makes this an especially sacred composition. Note the sheer proportion of detail along the length of the prabhavali, including and especially the elaborate Kirtimkham at top of the prabhavali.