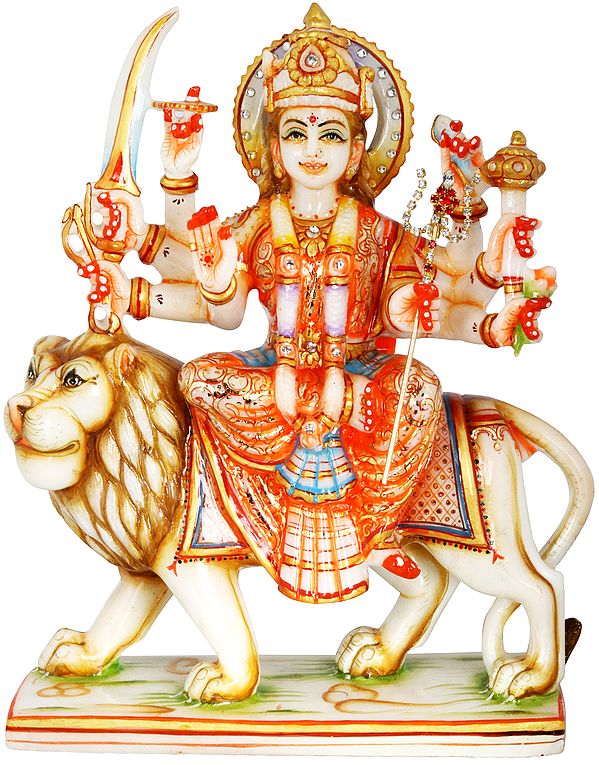 The emergence of goddess Durga marked the power of feminism; she was created by the cosmic powers of the trinity and other gods to defeat the Buffalo demon Mahishasura. Goddess Durga is revered as Durga Nashini, which translates as ‘the one who eliminates suffering’, as she is the Shakti or Mother goddess in Hinduism. She is sculpted here with a single piece of white marble in lalitasana posture riding a lion. Zoom in to the realistic fiery eyes of the lion symbolizing unlimited power. Durga riding a lion signifies her mastery over unlimited power. The golden-white hue displays the glowing aesthetics of the sculpture.

Ashtabhuja means ‘the one with eight limbs’. Durga is carved with eight hands carrying all her iconic weapons of protection and destruction of evil; the eight hands represent her core protection of the devotees from all the eight directions. Decorated with the red alta in her hands and feet and a red bindi on her forehead, she spreads an aura of beauty and delicacy. The carving of her intense eyes and the sweet smile depict her careful and caring behavior.

She has garbed in a red-orange sari flourished with varied golden patterns and matching jewelry along with a long multicolored flower garland adorning her neck and a haloed crown glorifying her head. The smooth beauty of this sculpture creates an aura of flamboyance in the eyes of the viewer.