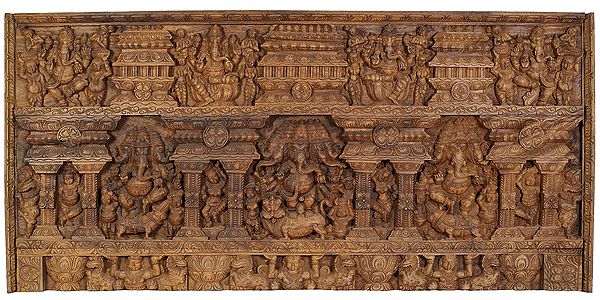 Ganesha is one of the most worshipped deities in the world. He is widely revered as the remover of obstacles (Avighna), Lord of all Ganas (Ganapati), and Bestower of Success (Siddhivinayak). He is always honored at the start of rites and ceremonies. Lord Ganesha is worshipped in many forms. In most illustrations, the figure of Lord Ganesha contains four arms and an elephant’s head. As many as 32 forms of Lord Ganesha have been documented as per Hindu Puranas.

Kshipra Prasada Ganapati is an immediate provider of benefits: prosperity, success, and peace. Meditating on him clears out obstacles in life and helps progress towards self-realization. Sankatahara Ganesha is the banisher of sorrows. He sits on a lotus flower. Sankatahara Ganesha holds a noose, a goad, and a bowl of payasam in his hands. His main right-hand postures a Varada mudra. Three-faced Trimukhi Ganpati represents the three primary Gunas: Sattva, Rajas, and Tamas. Sattva is goodness, rajas are a passion while tamas symbolize materialism. HIs right hand is in Abhaya Mudra, left in the Varada Mudra. On the other hand, he carries a holy pot with sacred water, beads, etc. Five-faced Heramba Ganapati is "Protector of the weak" and rides a lion. He extends the gestures of protection and blessing while holding a noose, Japa beads, ax, hammer, tusk, garland, fruit, and modaka. This finely detailed temple wood panel beautifully depicts four of the many forms of Ganesha. It is a unique and stand-out piece of art in our extensive collection of wood panels. It has two rows that evoke the semblance of the traditional temple design. The upper row contains four Ganesha figures separated by temple-like pillars. The lower row contains Heramba Ganapati in the middle and Trimukha Ganpati on either side. Each Ganesha figure is surrounded by worshipping Ganas.