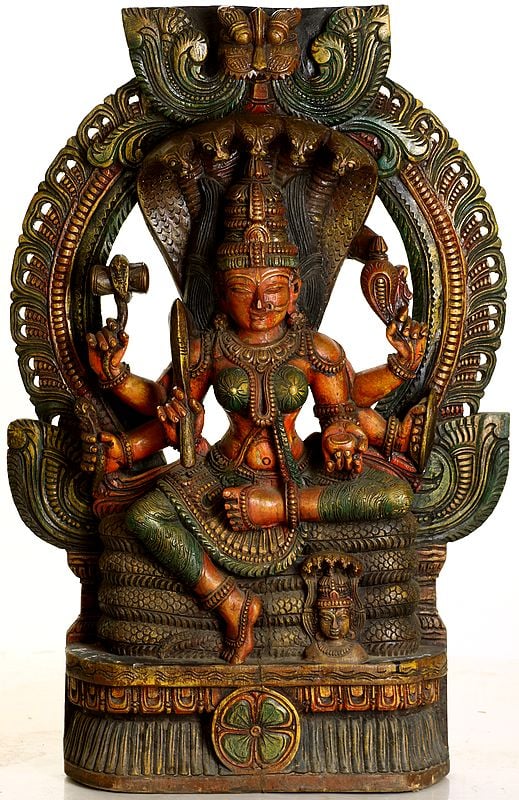 This strange looking statue, a six-armed divinity carrying in hands various instruments of war, even a snake, seated on the coils of a five-hooded massive serpent that is unfurling its hooded head over her figure as canopy, represents goddess Vaishnavi. It has been carved with minute details, especially the patterned texture of the serpent’s skin, out of a single block of fine wood and is as beautifully painted. The mythical position in regard to Vaishnavi is multi-fold, the two lines being prominent and better defined. One of the Vaishnava traditions defines Vaishnavi as the consort of Vishnu, and hence, a manifestation of Lakshmi herself, and the other, as Vishnu’s power that he created for assisting Devi in her battle against demonic powers, mainly Raktabija and other ministers of Mahishasura. Both traditions seek their main support in the very term ‘Vaishnavi’ that means the feminine aspect of Vishnu and might be both, as his consort, as also, his power.

Traditions vary as to who created Vaishnavi and other Matrikas or how they were created. Vishnu apart, sometimes Shiva is said to have created all Matrikas. One version contends that the Devi in fury beat the earth when the army of Raktabija, Shumbha, Nishumbha, Chanda and Munda provoked her, and every time she struck the earth there rose from there one furious divine power equipped with dreadful weapons. Vishnudharmottara Purana refers to the Matrikas’ immense power with which they destroy the army of Shumbha, Nishumbha … but also makes indication of their evil influence and also, how to evade it. The Varaha Purana talks of Vaishnavi as the symbol of greed. It is, however, the Devi-Mahatmya that gives the most accepted account. The Devi-Mahatmya contends that gods, when they felt in the course of witnessing the battle between Devi and demon-warriors that demons were outnumbering Devi, separated out of them their female aspects and equipped with such gods’ attributes they entered the battlefield and helped Devi in defeating demons.

Vaishnavi was separated from Vishnu’s being, Varahi, from his Varaha incarnation, and Narsimhi, from Narsimha. The Devi-Mahatmya perceives Vaishnavi as emerging riding Vishnu’s ‘vahana’ – mount, Garuda, and as carrying conch, disc, mace, bow and sword. However, Devi-Mahatmya does not allude to Vaishnavi’s any link with Lakshmi. As was her position in Puranas, and diagonally opposite to the Devi-Mahatmya’s own perception of Mahalakshmi, Lakshmi was not perceived as the goddess of battlefield. She was Lord Vishnu’s humble wife assisting him in sustaining creation. It was later that Vaishnavi from among the Matrikas, and Kamala, from among the Ten Mahavidyas, emerge as aspects or only the epithets of Lakshmi. In subsequent Puranic literature, and the same cult still continues, Vaishnavi is perceived as the aspect of Lakshmi operating against evil, and considered sometimes dually effective. In Tantra, Vaishnavi is more accepted vision of Lakshmi.

Not confining strictly to Vaishnava line, as the Devi-Mahatmya or even the mythical tradition perceived her, this image of Vaishnavi includes elements of Shaivite line too. The six-armed goddess carries in her hands a wider range of attributes indicating the breadth of her being : Shiva’s ‘damaru’ held along with a serpent, also another snake, elephant goad, an attribute of Ganesha, a bowl, an attribute of Kali, and sword and shield, the attributes of Indra. She does not carry any lotus to link her with Lakshmi, nor any of disc, conch, or mace, strictly Vishnu’s attributes; however, the serpent Shesha that canopies over her figure and affords her a seat on its coil, the towering Vaishnava crown and the style of ‘tilaka’ – forehead mark, are essentially Vaishnava features. The goddess is seated in ‘lalitasana’, with right leg downwards cast, and left, laid horizontally. For revealing Shesha’s divine-human aspect the artist has also carved its anthropomorphic image towards the bottom. Conceived with a round face, sharp features and well defined neck, the goddess has an as much accomplished anatomy, especially her well developed breasts clad under a beautifully designed stana-pata – breast-band, subdued belly, prominent navel and a highly balanced entire figure. The image has been installed in a ‘prabhavali’ – fire-arch which a Shrimukha motif tops.