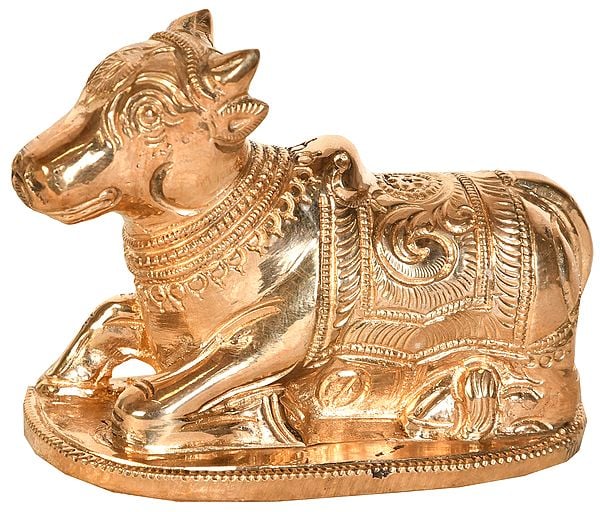 $239
According to the Vayu Purana, Nandi is the son of Kasyapa and Surabhi. Nandi symbolizes eternal waiting, one who knows how to simply sit and wait is naturally meditative. Also known as Nandikeshwar, he wishes to be with Lord Shiva always. So, he became his Vahan and always remains in front of Shivalinga. Bull has been used as a symbol of dharma (righteousness). Lord Shiva riding on the bull simply means that when you are righteous and truthful, the infinite consciousness, the innocent consciousness is with you. Nandi is Shiva’s loyal companion, and the chief of the god’s team of ganas. Even In Shiva Aarti, he is being mentioned as ‘NANDO BRAHMCHARI’ with great affection and respect.

This gleaming blissful Nandi statue made in shining Panchaloha (also known as Panchadhatu) - Bronze by the Swamimalai artisans. He is depicted as seated in Vajrasana Pose and is positioned so that he gazes in adoration at Shiva’s linga. Glowing like a thousand suns, Nandi’s powerful & energized body with a pair of pleasing horns, shining face with glowing eyes and two lovely ears and the tail. On its back is a fine-looking hump adorned with a beautiful decorated Asana and three ornamental haars (garlands )with the bells clung with round chains.

An essence of devotion, surrender and unconditional love, murmuring your wishes in Nandi’s ears and touching his tail helps fulfil wishes and get quick answers to your prayers from Lord Shiva. When you chant 'OM NAMAH SHIVAAY', Nandi is sure to bless you with good meditation power attaining moksha too. He is the provider of music as Shiva dances the tandava, the cosmic dance of creation. This Nandikeshwar is ideal to be placed in front of Shiva Lingam in your pooja altar.