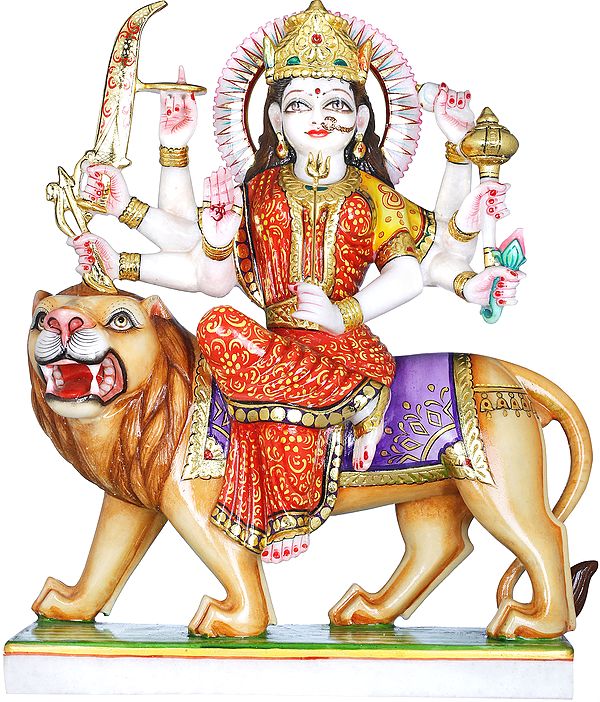 The glorious Devi Durga mounted on the back of Her trusty simhavahana (‘simha’ is the Sanskrt word for lion, ‘vahana’ for mount). Clad in a gold and scarlet saree that sets off the radiance of Her complexion, She is the very image of the quintessential Hindu devi. Sculpted from marble and finished with a great deal of iconographical detail, such a murti would be a valuable addition to the home of any devotee.

She is the ashtabhujadharini, the one possessed of (‘dharini’) eight (‘ashta’) arms (‘bhuja’). In each hand She wields a weapon given to Her by a deva. In Her anteriormost left hand is a trishoola (trident) that She holds straight ahead of Her torso, indicative of the presence of Her husband, the Lord Shiva. She directs a gaze above it and straight ahead of Herself, those large black eyes brimming with wisdom and invincible strength. The ruby- and emerald-studded crown of gold on Her head adds to the glamour of that beauteous face.

From the colour of its fur and the texture of its mane to the musculature of its limbs and the ferocity of its mouth, the simhavanhana of Devi Durga is a lifelike sculpture. It rivals its divine mistress in brute strength and ferocity - indeed, no lesser creature would look good next to Her. The beauty of this Devi Durga murti lies in the twin yet contradictory qualities of ferocity and serenity.