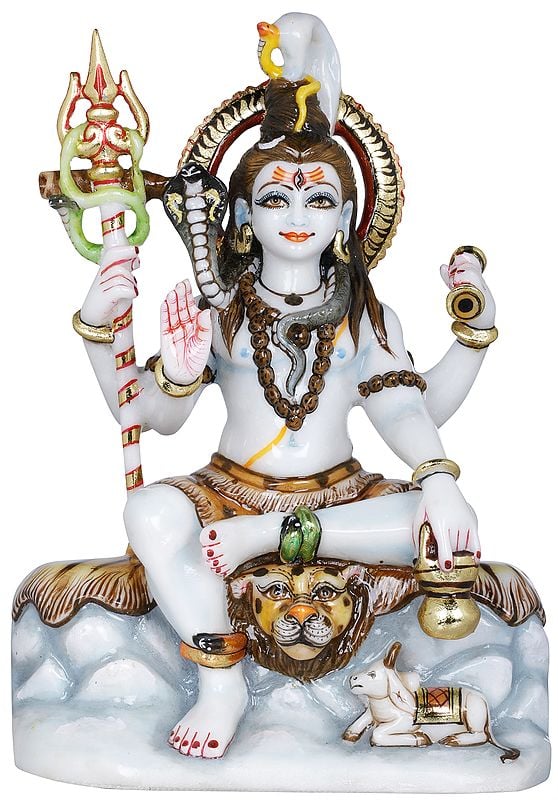 FREE Delivery
Only 1 available
$795
"Within the Trimurti, the Hindu trinity that includes Brahma as the Generator, Vishnu as Operator and Shiva as Destroyer - thus the three being the GOD”. Also known as Mahadeva, Lord Shiva is worshipped in the form of the Linga - there are twelve Jyotirlingas - at numerous places across India. Lord Shiva is also known as Nilakaṇtha which literally means the blue-throated when Lord Shiva swallowed the most deadly poison to save the world.

This royal image of Lord Shiva is romanticised & fascinating his followers by his unique appearance. Seated very comfortably over a tiger-skin asana spread over the skilfully crafted heightened rock pedestal as well as wearing Baghamber as his favorite dress code, the Vasuki snake around the neck, various little snakes coiled up around himself, three divine lines with an attractive Rudrax garland on his blueish neck, lovely kundals in the ears, the majestic third eye, matted hair, tamed holy river Ganga flowing from his thick locks. Depicting with four hands bejeweled with thick good-looking Kangana- a trident with a snake in one hand, a dumroo in the other, the third in blessing pose and holding the Kamandal in his fourth hand. A magnificent carved chakra is on the back of his face.

Aesthetically designed with optimum finishing and fine polishing this majestic and enchanting Shiva statue is hand-chiseled and hand-painted from single stone rock of best quality natural & pure spotless white marble from world-renowned Makrana ( Raj- India). The glamorous marble would remain uniform as regards to its texture, color, and polishing for years to come. This lively statue has got its own voice to narrate its own growth and mesmerise the onlookers.