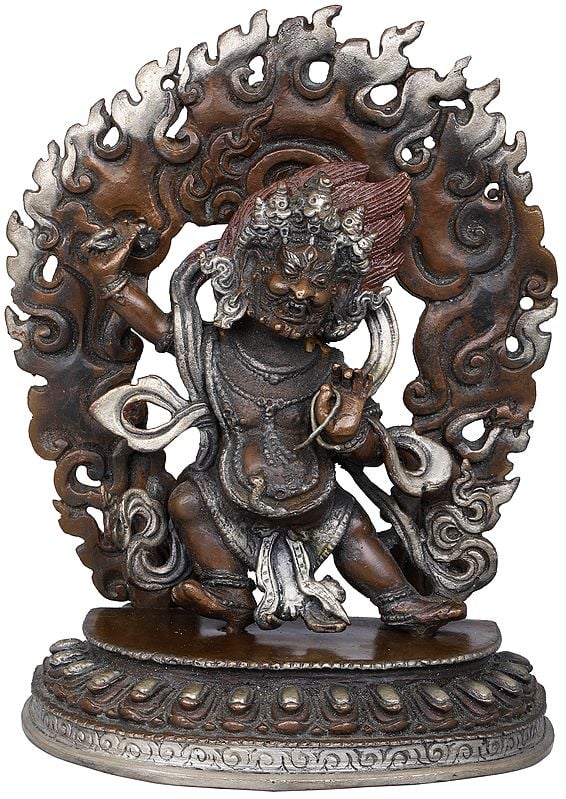 One of the earliest Boddhisattvas of Mahayana Buddhism, Vajrapani is the indestructible hand of Buddha, by being his protector and a power of mind to overcome obstacles of pride, anger, hate and jealousy; Vajra means ‘thunderbolt’ or ‘diamond’ and Pani means ‘hand’, he is the one who holds Thunderbolt Sceptor, symbolizing the power of compassion. He is always depicted in a taut posture representing the active warrior pose with the outstretched right hand brandishing a Vajra and left deftly holds a lasso to bind the demons.

Apart from his usual iconography, what strikes most is the unique color combination of chocolaty brown and metallic silver to highlight his key features; Sculpted in a wrathful expression symbolizing yaksha to generate fear in the individual to loosen up his dogmatism. He wears a skull crown with the red hairs standing on end; dense bushy eyebrows, third eye on forehead, serpent coiled around his neck and the loin cloth made of tiger skin are some of the major attributes to justify his wrathfulness. The sculptor has depicted all the features and elements in extreme realism.

Vajrapani Buddha stands here on a supremely carved lotus pedestal with a flamboyant prabhavali at the back having a complimenting gesture of rigorous and fiery carving such that of the Buddha himself. He is often depicted in front of Buddha temples justifying his nature of being Shakyamuni’s protector.