Fully insured
This length of pure crepe silk in bright blue classed in textile domain as Algiers blue, the colour that the waters of the Mediterranean coast around the Algerian capital Algiers have, has been transformed by the skilled hands of Kashmiri artisans into a sari with such magnificence as a loom might hardly claim to have ever woven, and not many women, to have ever worn. This piece of ensemble presents a strange synthesis : its ethnic character and every distinction from India, colour, from Algiers, needle-work responsible for its incarnation as sari from Kashmir, and its craze, a world-wide phenomenon, at least among Indian women, from its rare grace, gorgeous look and ability to have enormously diverse forms some revealing regional distinctions and ethnicity as reveals this sari the character and distinction of Kashmir.

The rare sheen that the rich blue of this piece radiates has reflections of the lustrous blue waters that the Mediterranean Sea has around the Algiers coast. Perhaps the gold-like glowing sun, bright but neither too hot nor too cold or enfeebled, and the reflection of the city’s towering white buildings – Algiers’ exclusive colour for its architecture, blended with the colour of coastal waters, create an altogether different magic of blue as the Mediterranean Sea, or any sea, does not create anywhere else. It is to witness this glory of the blue, surging along the rise and fall of the sea-waves, that the tourists visiting Algeria throng the Algiers coast round the year. This sari seems to have gathered that multi-layered lustre and all its magic from these coastal waters as also the name ‘Algiers blue’ for its dye.

Though embroidered partially, only border and palla or the end-part, the sari’s Kashmiri identity appropriately reveals in the needle-work’s neatness, fine stitches and intricate patterning, all by hands. Kashmir is not otherwise a sari, or even a related textile or yarn producing centre, nor it is a Kashmiri woman’s regular wear, it is the fine intricate needle-work, known in the textile tradition as sozni, that transforms a textile length into a Kashmiri sari. Ordinarily, the term ‘sozni’ means just the ‘needle-work’ – the work by ‘sozn’, a Persian term for needle. Different from what the term ‘sozni’, now almost rigidified for finest kind of needle-work, stands for, sozni does not refer to any particular kind of stitch or to any particular kind of design pattern or scheme. Contrarily, any kind of needle work which is exceptionally fine and is endowed with great perfection, flawless finish, elegance and the highest quality of workmanship classes as sozni. If anything, great amount of patience, practice and period of time, such as Kashmiri artisans confined within the four walls of their houses for the most months of the year due to adverse climate more naturally have, define sozni.

Perhaps to let the magic of its lustrous dye work uninterrupted the designer preferred a plain field except a one-and-a-half inch wide border. The border consists broadly of three parts : a base-line conceived with a course of tiny angles, inverted and upward, alternating, the arms of one entwined with the other forming a zigzag line; a fine bel – creeper, with three tiny plant motifs intermittently rising out of it; and, a five-petalled flower-motif alternating the three-plant motif. On wider side the border has on its outer edge a bel identical to that on its inside except that here a single plant motif replaces the three-plant motif. The palla, inside it, about four feet wide, has been adorned with diversely conceived design-motifs, some quite broad and some with a hair’s fineness and dimensions. The main design motif : two pairs of elongated Paisleys with apexes forked to create an arabesque-type form, diagonally opposed to each other – a design-motif more usual in Jamawar lengths, defines its centre. The four repeats of another exceptionally fine and vividly conceived and embroidered motif cover the recesses that the main motif creates on four sides. For adorning four corners and spaces in between them on wider and longer sides the embroiderer has used the repeats of a set of diversely conceived motifs some of them being transforms of Paisleys, butah, bels, flowers, plants … 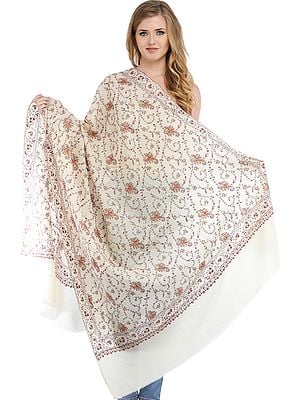 Ivory Tusha Shawl from Kashmir with Sozni-Embroidery by Hand
6.7 ft x 3.5 ft
$165
Out of Stock 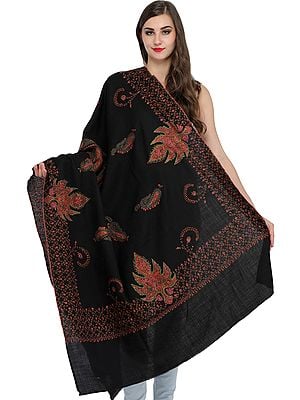 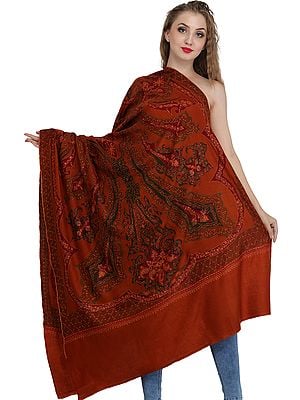 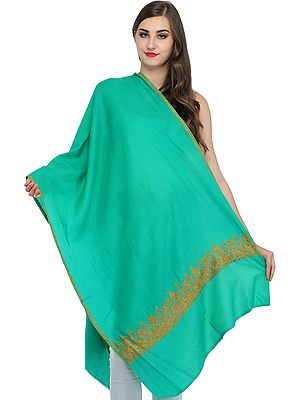 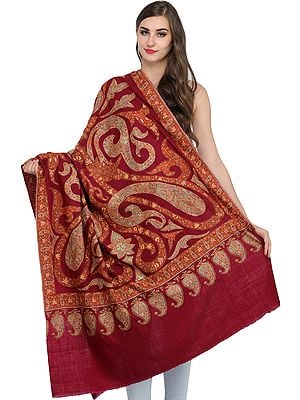 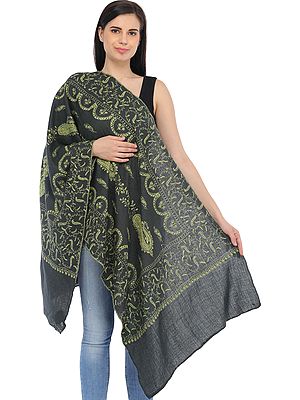 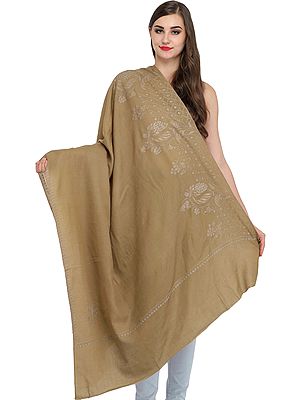 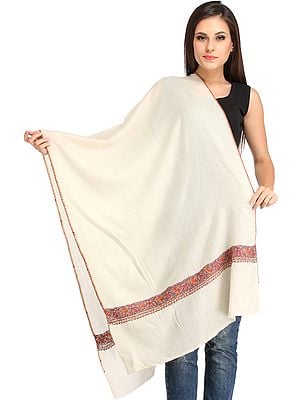 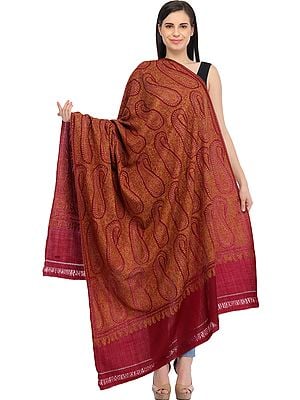 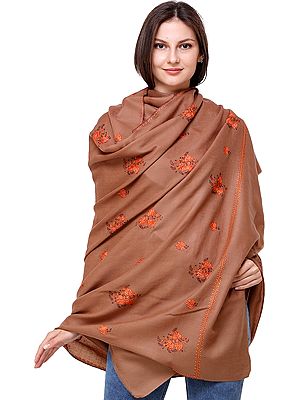 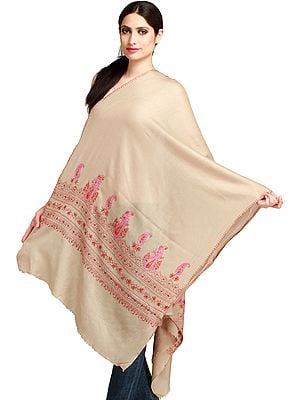 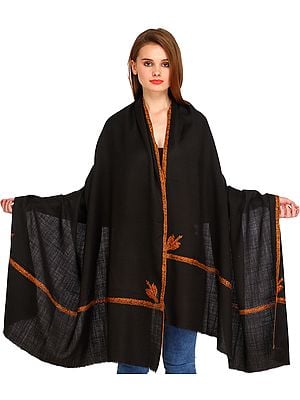 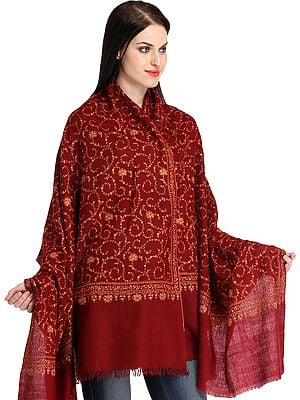 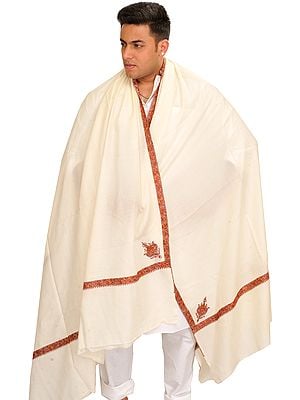 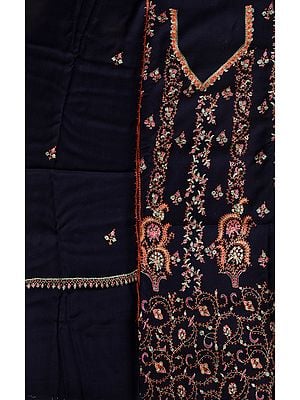 Eclipse-Blue Kashmiri Tusha Salwar Kameez Fabric with Sozni Hand-Embroidery
Tailormade to Size
$138.75
Out of Stock
$185  (25% off)