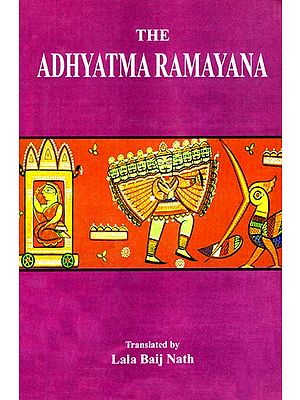 The Adhyatma Ramayana is a canonical book of the Vaishnavas and is a part of ‘the Brahmanda Purana. It is very highly respected by all classes of Hindus for the beauty of its language, its flow of verse, its clear statement of the doctrines of the Vedanta, and like the Bhagavada Gita, for its combination of the path of devotion with that of knowledge. It is a dialogue between the God Mahadeva and his consort Parvati on the divinity of Rama and opens with the question as to why when Rama was the Supreme Being, he forgot his real nature and had to be reminded of it by another. The allusion is to Valmiki Ramayana (chapter 117, Yudha Kanda) where Rama is sunk in the ocean of sorrow at the ordeal of Sita and Brahma reminds him of his being the Supreme self. If, on the other hand, Rama always knew his true self, why did he grieve for the loss of Sita. The reply of Mahadeva was that in truth Rama was the Supreme self (Paramatma) who never moved or did any thing, or was ever subject to joy or sorrow, birth or death, pleasure or pain. All these were super- imposed upon him through error beginning-less (anadi avidya). To expound this mystery is the task set before it by the Adhyatma Ramayana. The work is divided into seven Kandas or books like the Ramayana of Valmiki. These are the Bala (childhood). Ayodhya. the Aranya (forest), Kishkindha, Sundara (beautiful). the Yuddha (battle) and the Uttara (sequel). It consists of 64 chapters and 4,200 verses mostly in the usual Anushtubha metre. though other metres like the Indravajra are also employed. The language of the work. though not the simple language of Valmiki, often rises to eloquence especially in its devotional portions and the sonorous flow of its verses lends it quite a unique charm. Nothing is known of its author or as to who he was or where he flourished. The internal evidence furnished by it, however, points out to a modern origin, after the system of worship inculcated by the Tantras had come into vogue. So far as one could see from its language and trend of thought, it appears to be posterior even to the Srimad Bhagvat, the other canonical work of the Vaishnavite sect, written about the 14th century. The Indian Pandit or Sadhu does not trouble himself with these questions of chronology, nor cares to examine the language or the style of the book he venerates. If it serves his purpose, either of devotion or as the giver of livelihood, as it does, it is quite sufficient. Anyhow from its intrinsic merits the work deserves serious study on the part of all lovers of Indian religious philosophy. The main incidents of the story in the Adhyatma are the same as in Valmiki. Wherever there is a difference, it is due to the fact that whilst the Adhyatma starts with the theory of Rama's divinity and tries to explain away all failings of humanity, wherever they come into the narrative, by resorting to the anadi avidya (beginning-less error) of the Vedanta, the Ramayana of Valmiki describes Rama as the best of men and tries to show how, in spite of the few failings of humanity, one can rise to godhead by setting before him the noble ideal of truth and duty as Rama did. Of course, the story of the Valmiki is the more natural of the two and appeals to the reader more strongly than that of the Adhyatma. But in India the modern man of devotion, who loves to invest his favourite deity with the attributes of the Supreme; will not listen to any imperfections of his divinity or ascribe them to the error of those who see in him such imperfections. The Vedanta, which looks upon the world as due to the action of nescience. 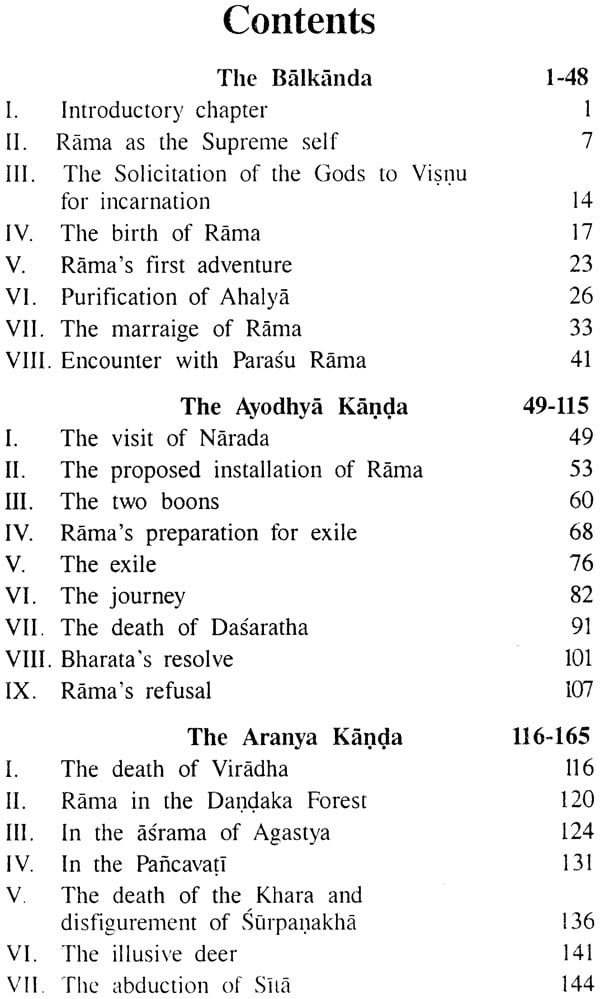 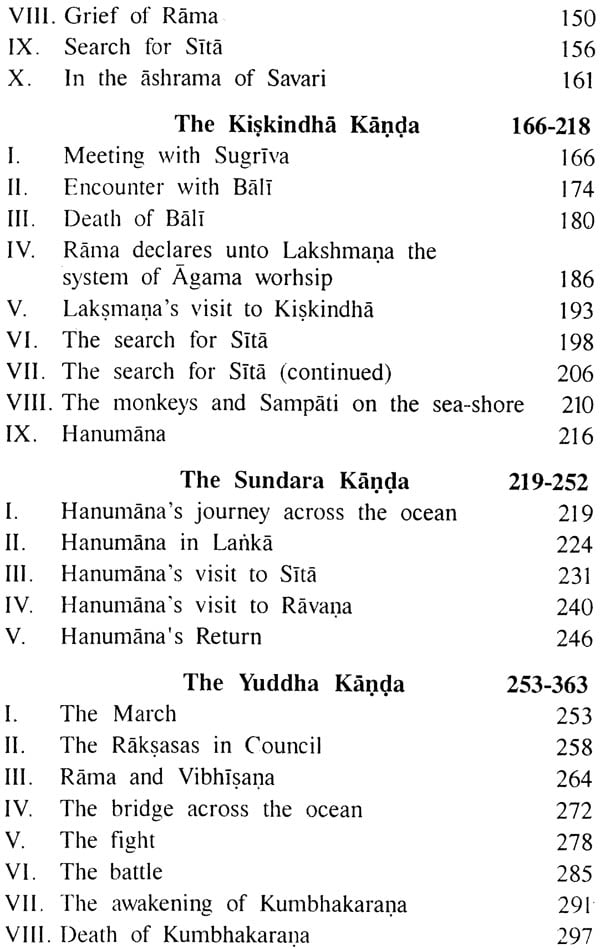 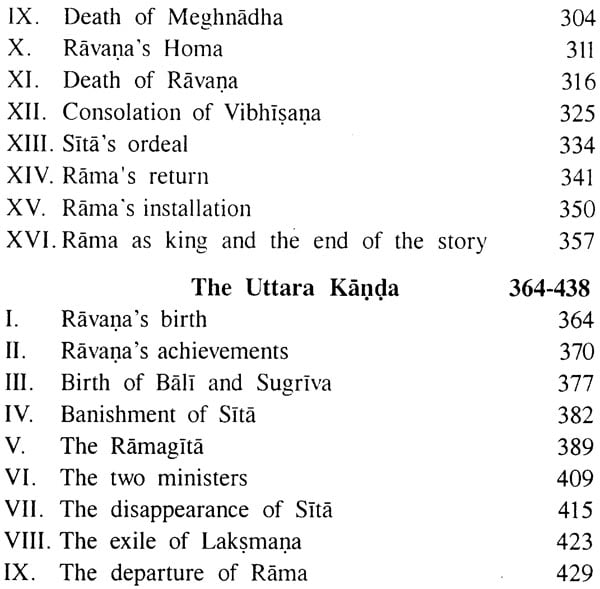 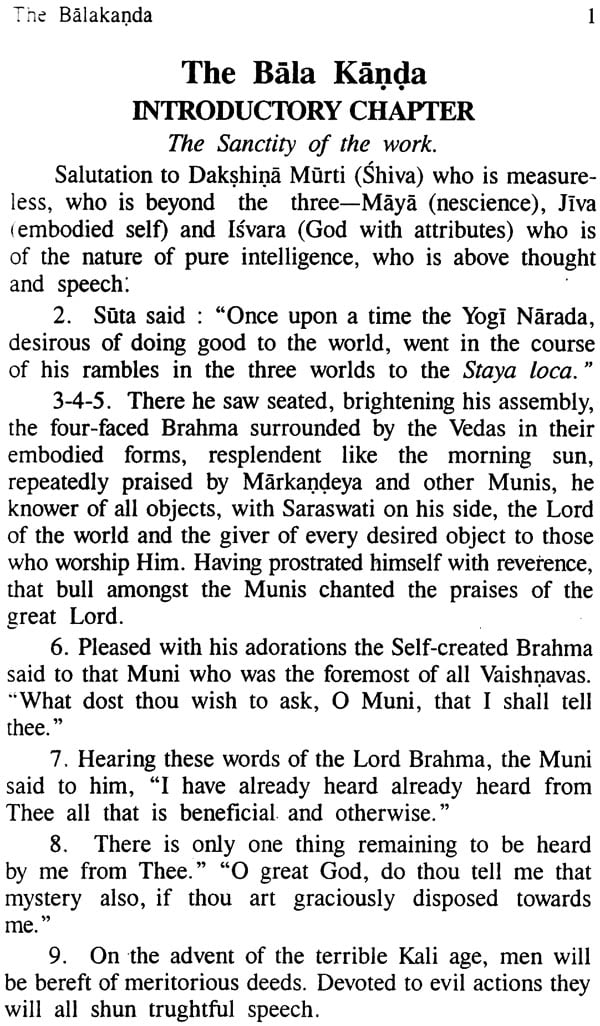 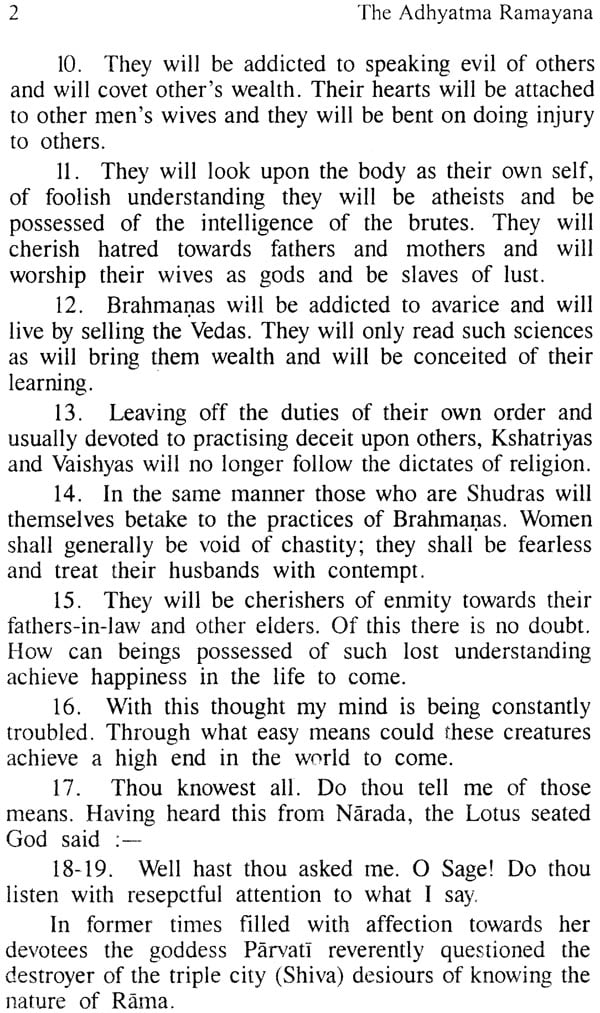 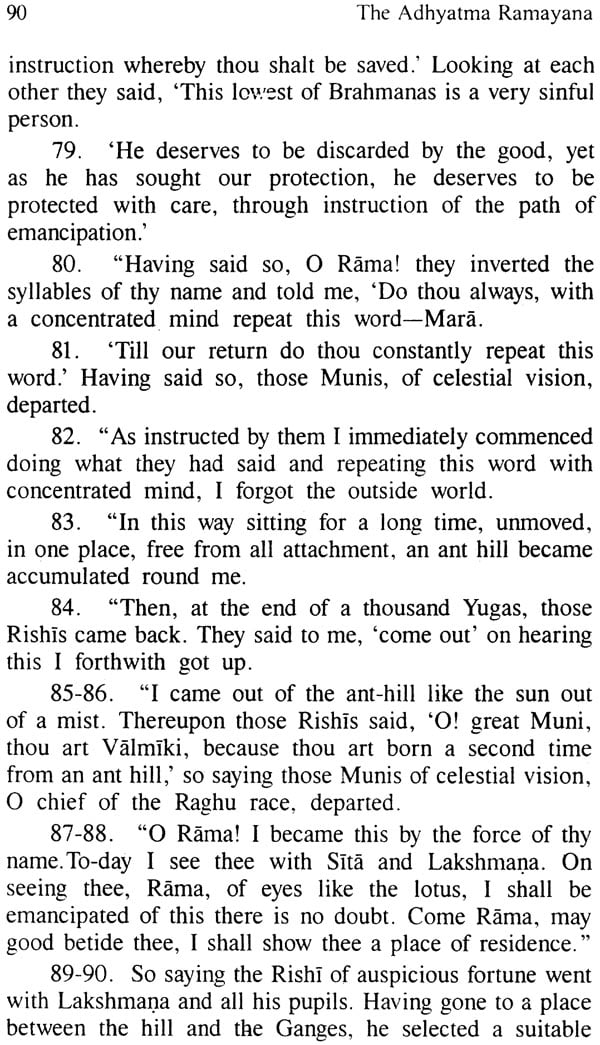 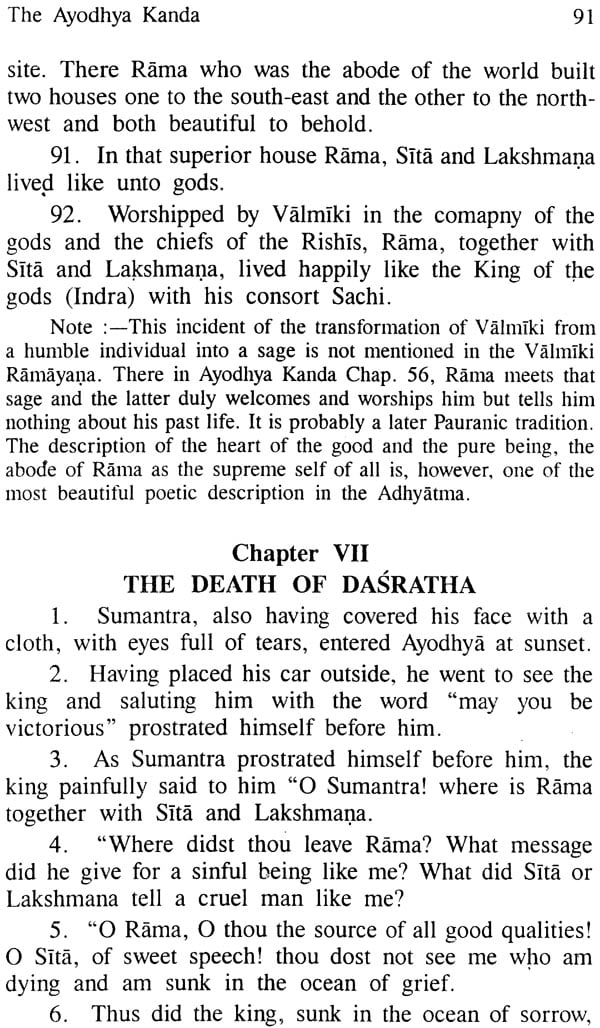 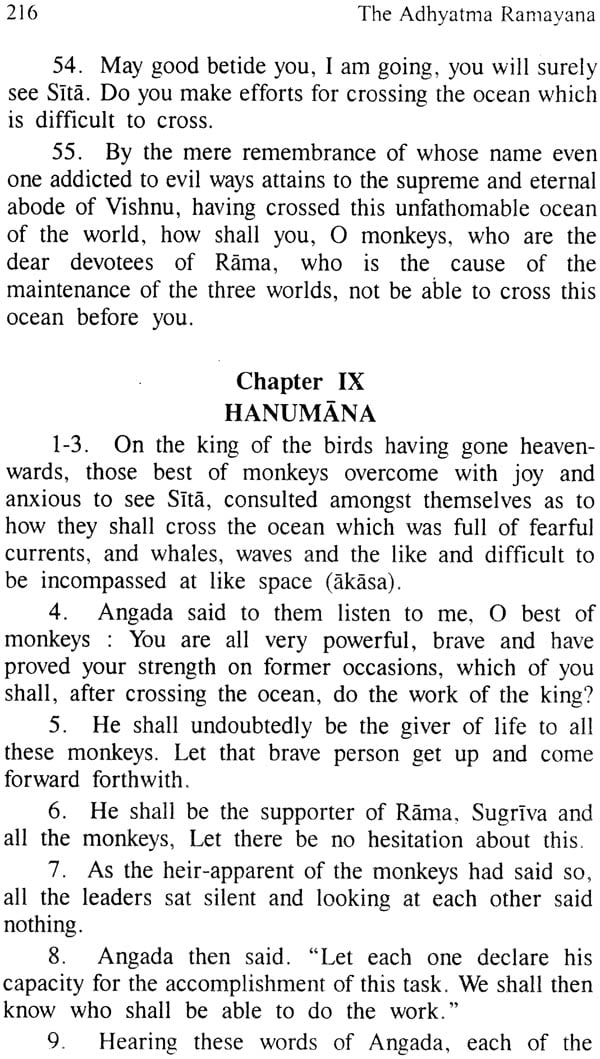 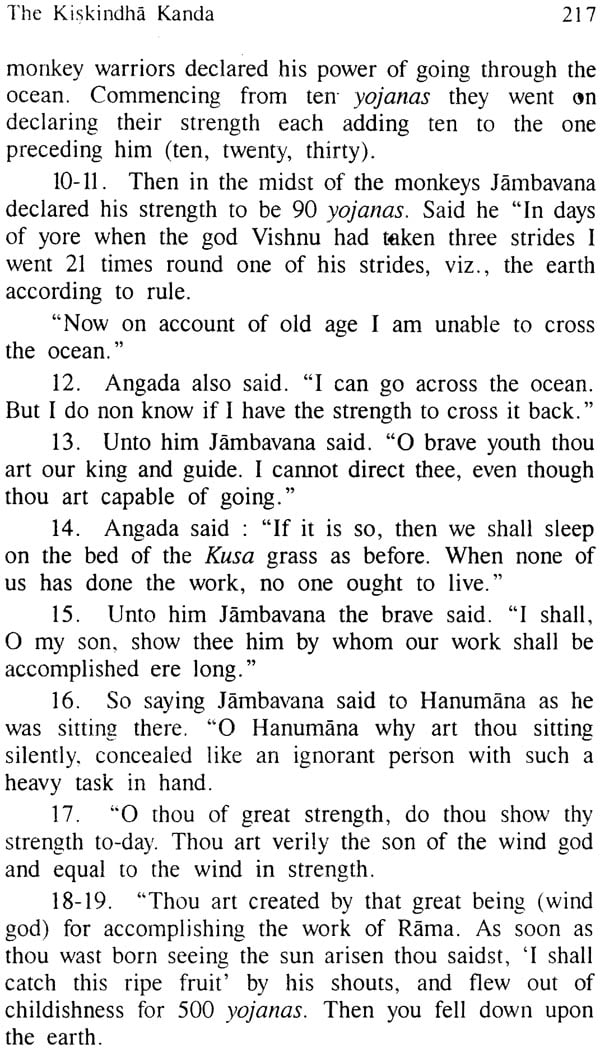 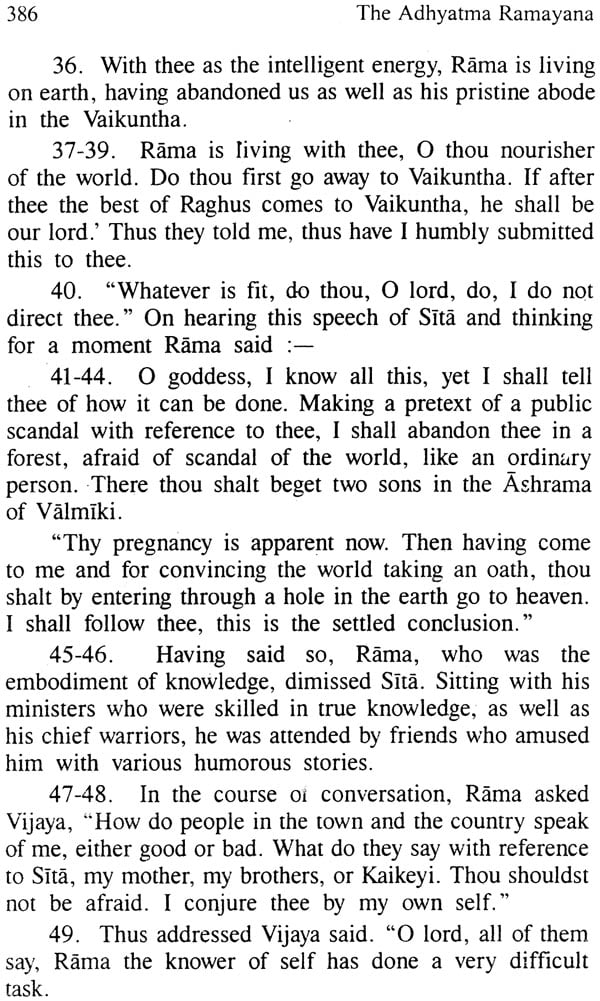 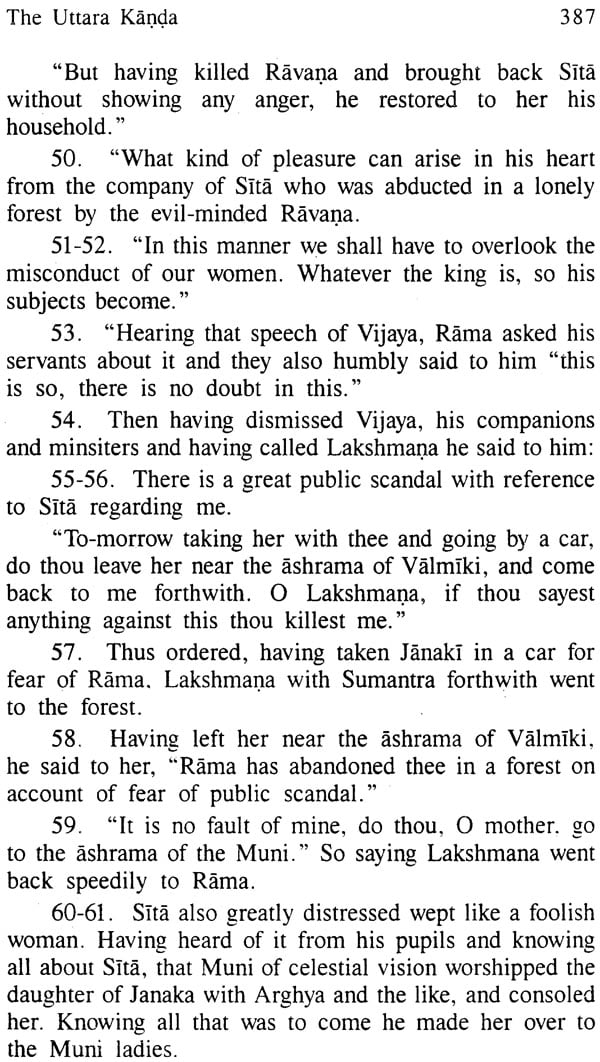 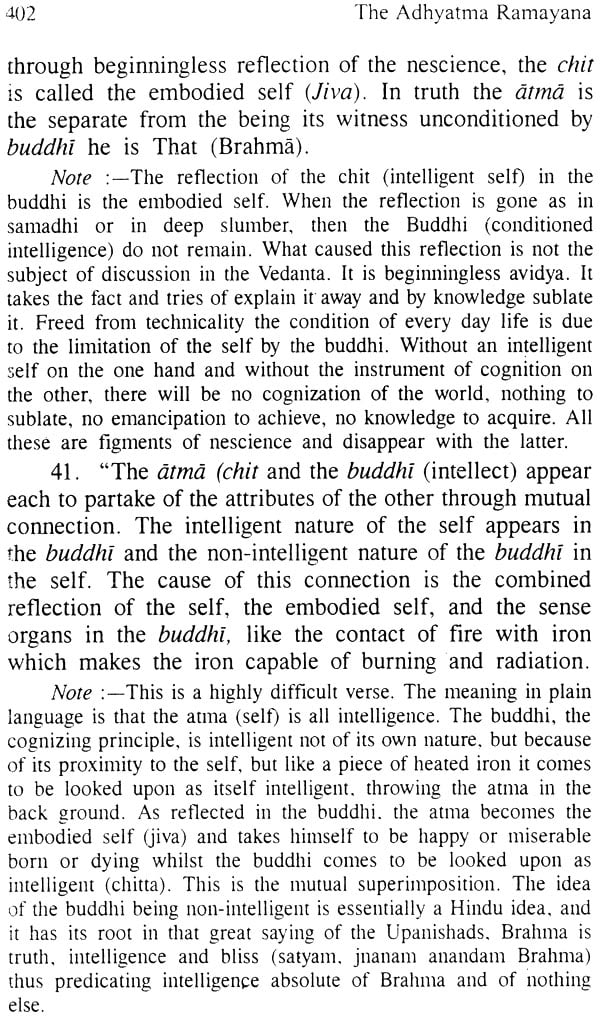 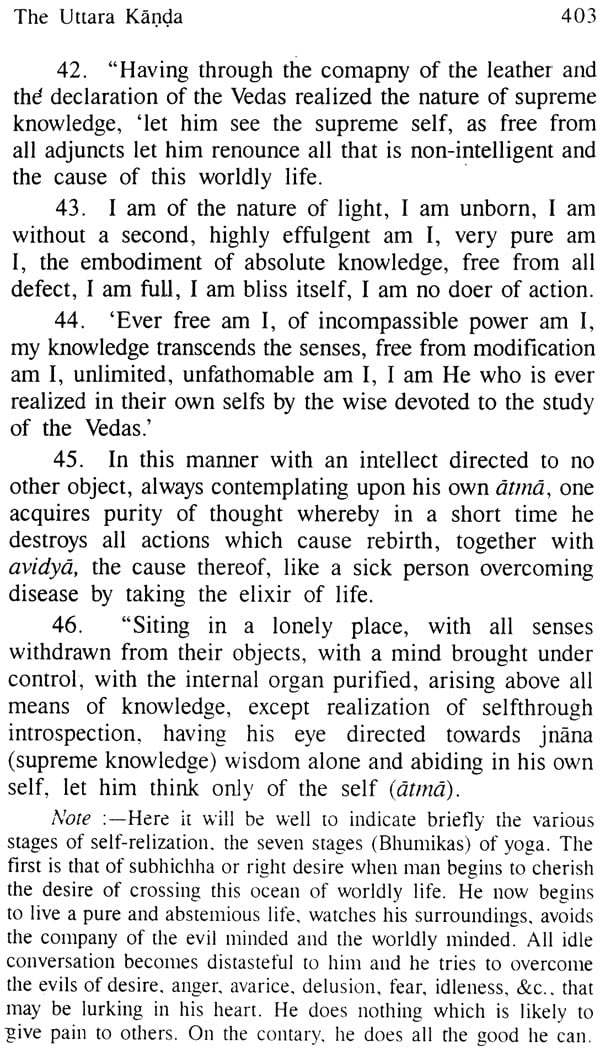 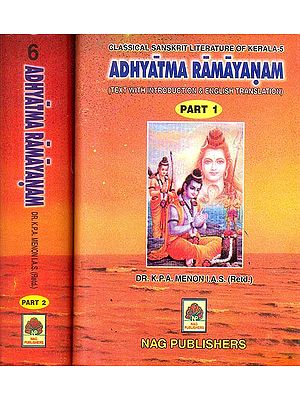 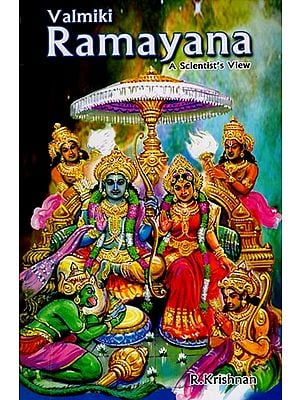 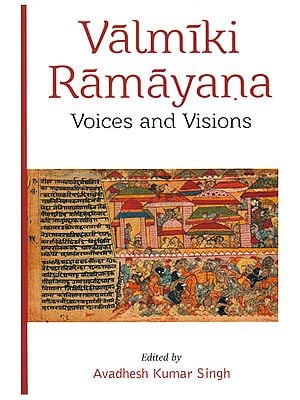 Ramayana Through The Ages
By Avadhesh Kumar Singh
$44.50
FREE Delivery