Beyond Life and Death

Born in Punjab on 12th August, 1936, he proceeded for his higher education to Kashiji and did a very deep study of Vedic Philosophy and other schools of thought. He secured the degree of Ph.D from Banares Sanskrit University on his novel research work "Mukti Mimansa". He authored many innovative works and wrote his research papers for several periodicals and magazines. He powerfully and spiritually advocates the philosophy of oneness with God. He believes God in all names and forms, as Swami Ramatirtha did.

With dedication to his nation and a deep urge for the intimacy with philosophers and seekers of God he toured the whole country. With a very kind heart for the underprivileged and an aptitude for independent thinking, he is now an established ideal saint and is particularly interested in spiritualism and orientalism.

At present he is the Parmadhyaksh of Swami Ramatirtha Mission, Rajpur, Dehra Dun. Under his able guidance, twelve branches of the Mission are engaged in spreading education, propagating religion and establishing free dispensaries and reading rooms.

Dr. Kishore Das Swami is not only a famous saint and a great philosopher but also a person who is deeply absorbed in search of fundamental truth as propagated in our shastras.

There is only one Over-Soul, God, who is so bright a truth that he gives movement to all. He creates the world by one thought, he rules it and when he desires the world wanes within him. He is the one to give light to the Sun, the Moon and to the stars. On the right of Amavasya (no moon night) when there is all embracing darkness we observe innumerable planets and stars bright and moving in the sky. Surprisingly, none of them collides with the other. Who controls them? God! The Sun too shines because of his lightTasyabhasa Sarvamidam vibhati'.

He creates the world merely by a thought to do so. Numerous living beings are born in this world. They survive for sometime and when their body gets decayed they die. Generally human beings come to this world with closed eyes and leave this world with their eyes closed and are not able to know the truth about the cycle of life and death. They want to be liberated and want to nurture to the full but don't know about the means to do it. At sensual and consciousness level this nature of a human being can be observed. If you keep a pot in a dark room with a small creeper plant in it, the plant turns towards the light that comes in from a hole. This is called as movement towards perfection from imperfection (towards completeness from incompleteness).

A person feels suffocated in a closed room. Remove him from there and keep him in a bigger room he will feel happy and relieved for a while but soon even that room will appear smaller to him. Shift him to a palace and there too he will feel captivated after sometime. A big palace too appears to be smaller and limited to such a person. He feels depressed, helpless and unhappy. Why does this happen? He wants as much of space as God himself is having. But how he gets so much of space? How to become God? He doesn't know the answer for it or cannot resolve that query. People have tried to know God by whatever they could conceive about him. People have imagined Gods in number of shapes and forms. Some comprehend him in his invisible form and others in bodily or corporal form. Man's journey of life matures and he achieves perfection when he meets God in number of shapes and forms. The Soul achieves perfection when it meets God and becomes one with him or unites with him. It is through knowledge (Jnan) that you have to know him and through devotion (Bhakti) that you have to achieve him.

In your path towards achieving perfection through Gyan Marg or knowledge you have to understand the sense organs, the mind, the brain etc. and learn to control them. In the process you have to become introvert, withdrawn, reticent and try to witness Soul within your body. In Bhakti Marg or path of devotion it is believed that the distinction between the devotee and the God remains or exists. When God is perceptible and before you as an idol, you have to face towards him. A devotee thinks that 'I am a servant and God is to be served.' This kind of difference always remains in Bhakti Marg but in Gyan Marg this difference vanishes. The way a drop of water when blends with the ocean and becomes one with it leaving behind its own identity as a water droplet in the same way by performing Sadhana one breaks the body wall and becomes one with the Over-Soul. Such a person is not reborn.

Though God is one but there are number of ways to reach him. And only man can tread on those paths. A man can perform virtuous deeds for he understands what is dharma. Birds and other animals neither can work nor know what dharma is all about. They cannot meditate and perform pooja or worship. It is not easy to get human life. Even if you are born as a human being it is difficult for you to lean towards God. Even if you lean towards him it is difficult to maintain sadhana. The truth that you see here is the same over there after death. Whoever finds difference between the two receives death after death. Once if you know that truth, you become ignorant of worries, tensions, death etc. forever.

Consider a man born in a lower strata of society. With great difficulty he completes his studies. After much struggle he passes a difficult competitive government exam and becomes a judge.

He starts working on the post for quite sometime. To such a person it becomes difficult to think that 'I come from a low family'. He by now understands the way to achieve perfection.

It implies that you need to work sincerely to avoid downfall and achieve perfection. Only bhakti is the way. This sweet nectar introduces you to God. Try to know your soul which is a pure part of that God. This will burn your sins. Life-death cycle will cease. There are number of branches in Buddhism. Vipashyana is one of the ways of meditation whereby you witness complete negation (Shoonyata). In Jainism they have a way of meditation or Dhyana called Anupreksha' and doing this cleanses all the dross from your soul.

Sikhism promotes recitation of the names of God. Through this recitation one can cross over to the blessed world. Islam advocates Roza and Namaz which will help witness God. There are number of faiths and religions throughout the world. Don't have distrust or resentment for them as they are all ways to reach the same God. Only after witnessing Him one achieves perfection. Choose or select any one path, start right now. You can go beyond life and death.

The readers may observe that above mentioned aspects of religion or means to attain God are dealt in this volume. I hope that those interested will follow any one of the prescribed ways to attain God and try to understand the importance and value of human life and enter into the vast ocean of peace and brightness that human soul craves for. 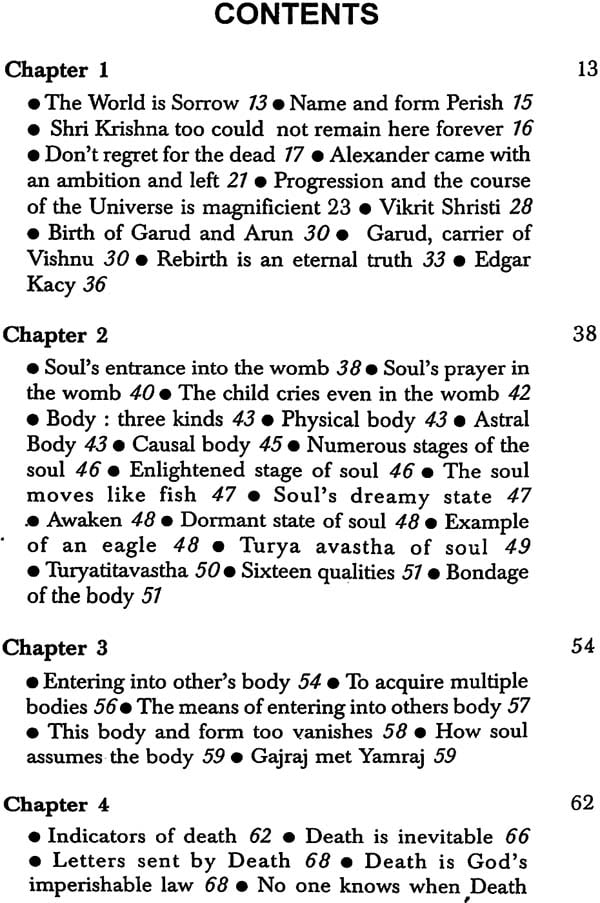 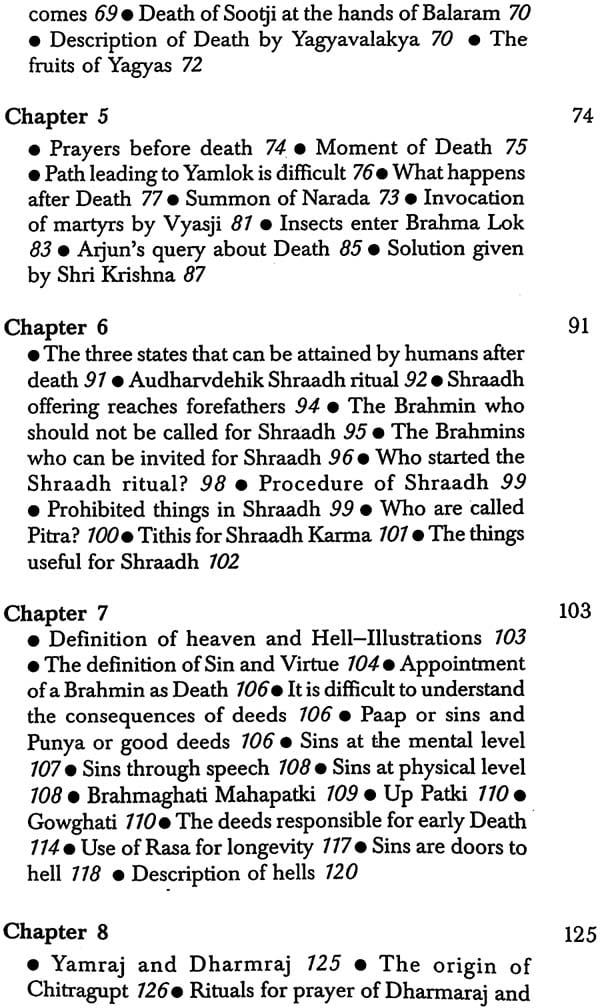 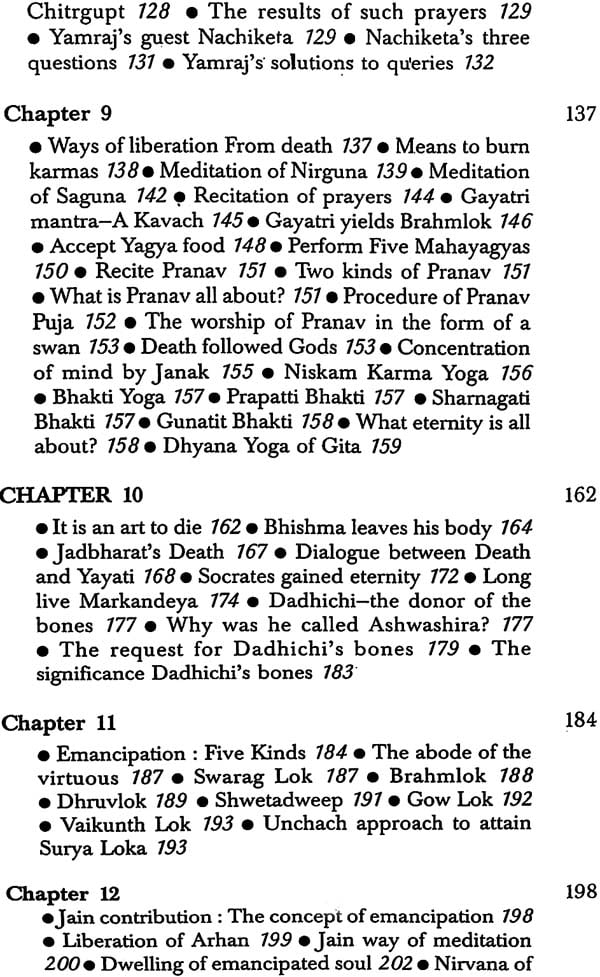 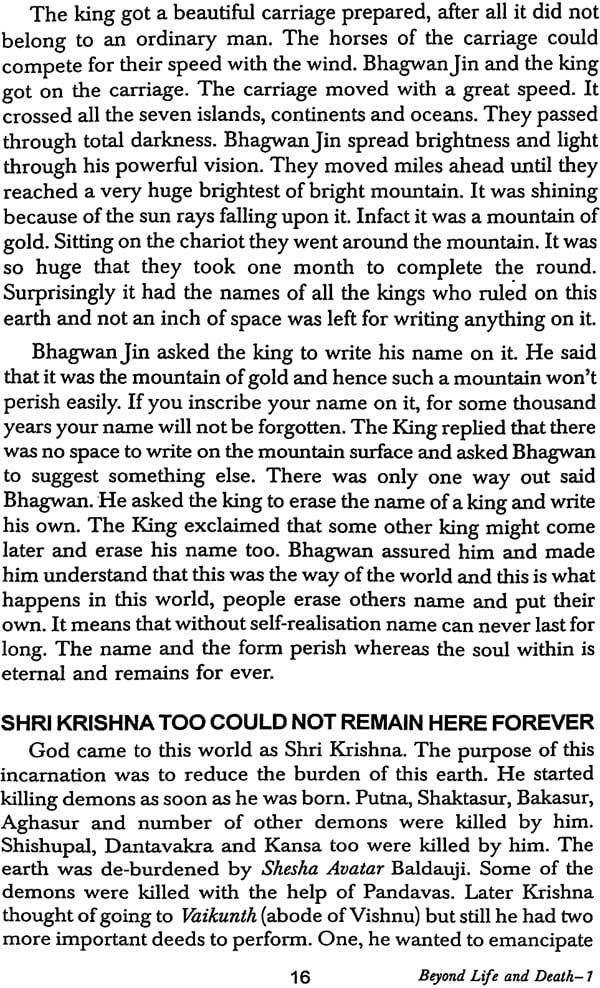 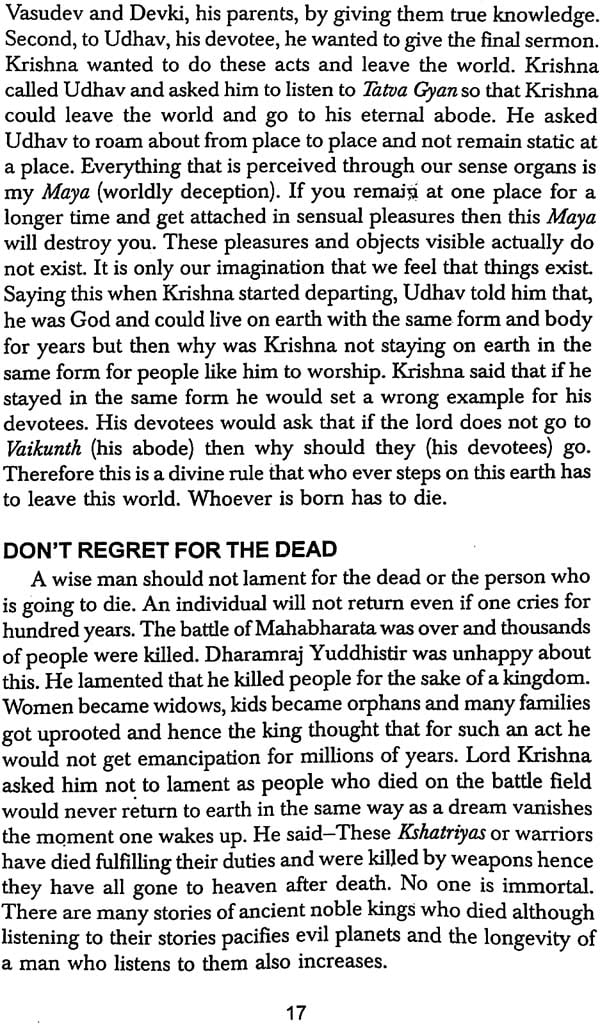 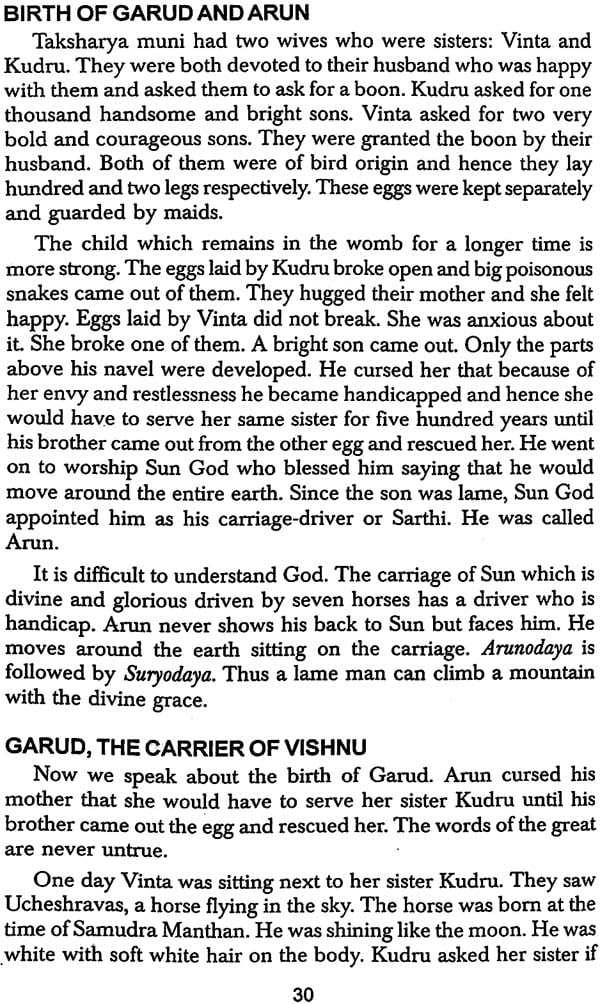 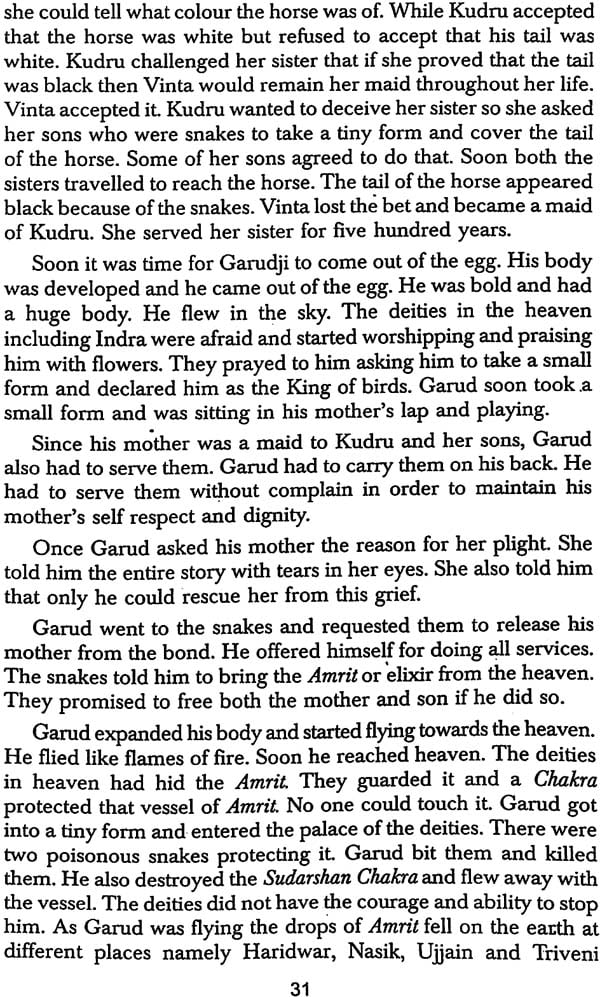 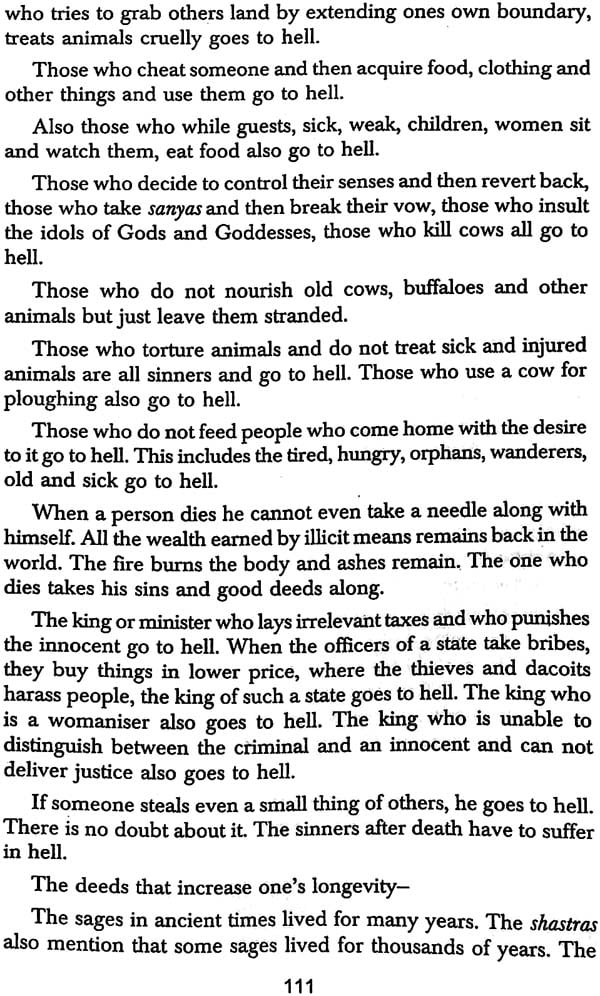 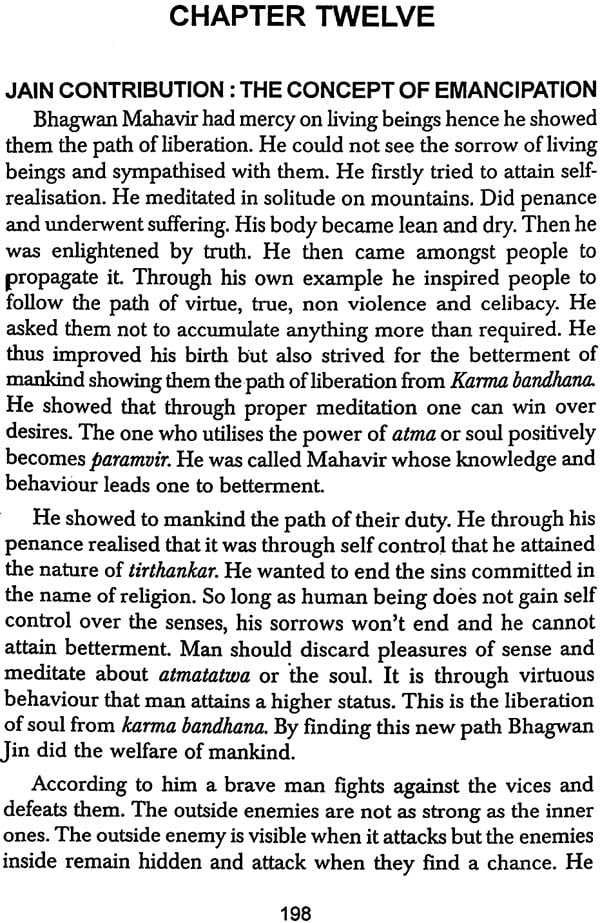 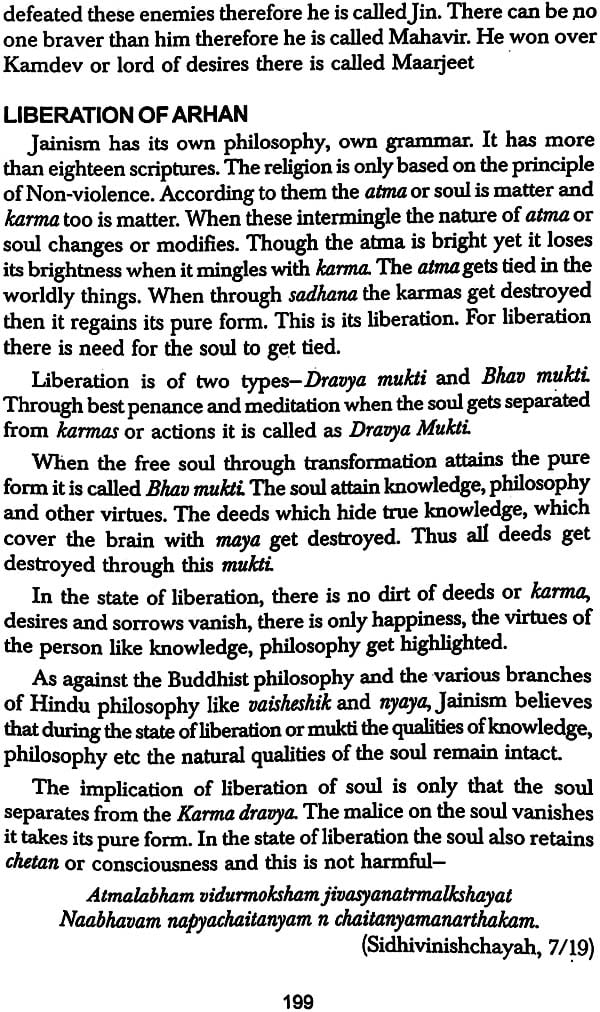 Philosophy of Life and Death
By M.V. Kamath
$24
FREE Delivery Life Beyond Death: A Critical Study of Spiritualism
By Swami Abhedananda
$16.50
Best Seller Living Dying - A New Perspective on the Phenomena of Life, Disease and Death
By Manu Kothari & Lopa Mehta
$22
FREE Delivery Life In Relation to Death
By Chagdud Tulku Rinpoche
$11 The Life Beyond Physical Death
By Pandit Shriram Shrma Acharya
$7 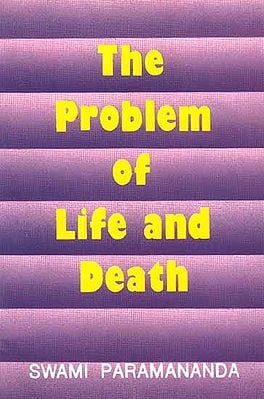 The Problem of Life and Death
By Swami Paramananda
$7 Death Dying And Beyond (The Science and Spirituality of Death)
By Alok Pandey
$28.50
FREE Delivery