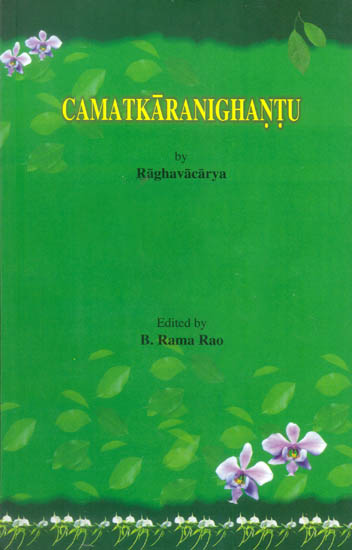 He worked for a long time in Indian Institute of History of Medicine, Hyderabad in different capacities and as in charge for several years. During his tenure in IIHM he contributed immensely for the development of the research activities and also of Museum and others pertaining to the history of medicine in India in general and history of Ayurveda in particular. He collected information relating to health and medicine from non-medical sources like kavyas, puranas, inscriptions, archaeological sources and traveler’s accounts etc. He also served as the in charge of Dr. A. Lakshmipati Research Centre for Ayurveda and Literary Research Unit in Chennai and retired as the Director of Indian Institute of Panchakarma and thus gained experience in different fields. He later became the principal of Dharma Ayurvedic College, Sriperumbudur, Tamilnadu.

Another important contribution of Dr. Rao is the collection of information and study of manuscripts particularly of Ayurveda in Sanskrit and Telugu available in palmleaf and paper. He brought to light several unknown valuable works on Ayurveda and allied subjects lying as manuscripts. Some of them are Toderananda Ayurvedasaukhya, Ayurvedabdhisara, Rasapradipika of Bharadvaja, Dravyaratnavali, Madanananda, Parahitasamhita, Vaidyasastrasivanubhava, Madanagama, Siddhasara and many others. He compiled a list of Sanskrit Medical manuscripts in India in 1972 and it is revised, enlarged and is being published by the Central Council for Research in Ayurveda and Siddha (CCRAS). He was an examiner for BAMS and MD of Osmania and other Universities in A.P. and also for PhD of Banaras Hindu University. He was the National Member of the International Society for History of Medicine for several years and was member of National Commission for History of Sciences and other academic institutions.

I am happy to present this small interesting book Camatkaranighantu. (CN) I printed one verse from it in New Year Greetings long back and seeing that many of my friends and scholars enquired about it. Then I published it in Telugu script in a Telugu journal Indian Medicine Vol.38 No.12, March 1988. I collected some materiel on difference words mentioned in it but it remained incomplete due to my transfer from Hyderabad. After my retirement and setting down at Hyderabad, I took up the work of its publication. Meanwhile I found that Dr. V.N. Joshi and Vd. P. Rammanohar from Koppa published it. They kindly sent a copy of it to me on my request. It contains only 13 verses but some glossaries and appendices for the drugs and their equivalents in Telugu and Sanskrit and botanical names are added. I asked Dr. Joshi for a Xerox copy of the original manuscript with them for comparison and study but I could not get it. I have, however, given the variants from published book in the footnotes. I acquired another copy from Dr. L. Krishnamurthy, son of Loka Sitaramaya.

The advantage of the Koppa copy is that it contains colophon, which gives the name of the author as Raghavacarya of Bharadvaja gotra and Sudarsana family.

The editors of Koppa CN have elaborately discussed about the format of CN. The purpose of this nighantu is mainly threefold: 1. Helps to recollect different meanings of the same word-nanarthas. 2. Different names of the same drug are known. 3. Words that sound alike in pronunciation with difference of only one or two letters or even long and short vowels are identified and noticed along with their meaning. The editors of KCN stated that the 13 verses contain around 175 Sanskrit names representing approximately 225 drug identities mainly of plant origin correlated to 165 Telugu names. The total number of names in this book of 25 verses is 450.

I pay my respects to versed guruji Prof. P.V. Sharma for the affection show on me by writing the Foreword at short notice in spite of his old age.

There is no doubt that this booklet Camatkaranighantu, though a small work containing only 25 verses will be welcomed by the Sanskrit and Ayurvedic scholars. The verses in this are with sabdalankaras (pun on words) and are very pleasant to the ears. By memorizing these verses physicians can remember the uncommon names of some drug as well as different meanings of the same names, though the tastes, effects and other details of the drugs are not known as in other Ayurvedic nighantus.

I found this incidentally. The members of Loka family were physicians to Nizams and their countries. With an intention to collect their family history, books and manuscripts, I visited Vaidya Loka Laksmayya. Sri Laksmayya is a young man of 85 years living in a village Velijerla about 80kms from the Hyderabad. Even now he is quite healthy and not only attends the patients coming from the far off places but also supervises the agriculture in the fields. Among many things, when I asked about their nature of study, he told that they were initially asked to memorize a nighantus and recited the verse vari vari varuni vd from the nighantus. I was attracted by the camatkatra of the verse and thought of tape-recording them during the next visit. He told that he might be having a written copy of it and promised to trace and gave it later. As promised he traced the copy and handled it over to me during my next visit. The book the copy and handed it over to me during my next visit. The book was in very bad condition. It contains 25 verses and then the words and their meanings in Telugu. The name of the author is not mentioned. I came to understand that another copy of it was available with Loka Sitaramayya of the same family living in Hyderabad. I met him and he visits to him. I could not trace any other copies of it. Information given by any scholar will be gratefully included in the next publication. The Telugu words in this are given as they are. Efforts are there to give explanatory notes and publish it.

My foreword to the Telugu publication gives the incident how I got the copy of this manuscript. Other details about the work are presented here.

The Catalogues Catalogorum has no entry of this work. I used the following three copies for this publication.

1. This is the copy, which was acquired from Loka Laksmayya and was published in Telugu script. I do not have the original. 2. Book published from Koppa by Dr. Joshi and Dr. Ra, Manohar. This contains only 13 verses and Telugu meanings for all the names of drugs. Variants of this copy are given separately. This is indicated as KCN. 3. Copy acquired from Dr.L.K.Sharma son of late Loka Sitaramayya. This is indicated as LCN. This is written in a foolscap size bound book with pages numbered by a numbering machine. This bound notebook contains written material from page 3 to 43. Pages from 44 are blank. These pages are written by Loka Sitaramayya, who mentioned that he wrote down all verses, which were learnt and memorized by him. He started the writing on 9-2-32 dhata year, pusya month 13th day of dark fortnight. The date on the last page is about five years later i.e. vrsa year caitra month amavasya. Camatkaranighantu with meanings in Telugu is written on pages 13 to 18 with only 3 lines on the page 18. The bound book contains Rasanighantu, Nidanacudamani and other notes.

The Vaidyaka Volume of Catalogue of manuscripts in the Oriental Research Institute Literary, Mysore has an entry of Camatkaranighantu, which, according to the authorities, is not in a condition to be Xerox-copied. On my request Dr. Harini, MD (Ay) went to the library and found that the manuscript is a different work probably a commentary named Camatkara.

The copy I obtained from Loka Lakshmayya does not contain any colophon. The Koppa book contains a colophon and it gives the name of the author as Raghavacarya of Bharadvaja gotra and Sudarsana family. But the editor in “Editor’s Notes” mentioned that Rangacarya son of Ranghavacarya is the author. It is not known whether some words are missing in the colophon of printed text, though found in the manuscript. The name Rangacarya does not find place in the colophon.

The editor of Koppa copy has safely concluded that it was written after 10th c.AD without any later limit. The Koppa copy is based on a palmleaf manuscript. Normally, the scribes of palmleaf manuscripts mention the date of completion of transcription. The editor has not mentioned about this; if found that may be later limit of the author. This work is not quoted in any work of Andhra region or other parts of the country. Its memorization by physicians of Andhra-Karnataka border suggests that a person of this area wrote it. The copies available are written in Telugu script and with Telugu meanings. The meanings in Loka copy and Koppa copy are identical. This work has not become popular in other parts of even Andhra or Karnataka. Probably after a short time of its composition paper and printing might have come into use arresting the spread of it to other parts. The Andhra-Karnataka border is a place where the Madhava followers are in considerable number. On the basis of all these it may be concluded that the author might have lived during the 17th -18th until other evidence are found to the contrary view.

I have ignored the gender of the names of drugs and considered only the pratipadika to avoid confusion while comparing with the names in other nighantus. The KCN text differs in some place with the commentary and some words and a line are missing. One word-sikhari-is missing in the first line; one line (pada) is missing in verse3; verse 13 does not conform to the meter. These appear to be printing errors. However they have been shown in footnotes.

The LCN copy is almost identical with the first copy acquired by me. Few variants are found in the verses but they are identical in the meanings portion and hence I have ignored them.

V.T.V. Ramanunjaswamy published a journal of Ayurveda in Telugu entitled Ayurvedakala from Hyderabad. Prof. K. Venkataramaraju gave me the first volume of this journal with twelve numbers from January to December 1941. In number 3 (pp20-21), a note Vicitranighantu by Ayurvedaratna Bhattaru Venkatacharyulu is found. The author stated that this is from a palmleaf manuscript with him and that he gave meanings with authority from nighantus. It gives only one sloka, which is identical with the first sloka of CN, and meanings are also same. For each word he has added quotations from Sadrasanighantu. 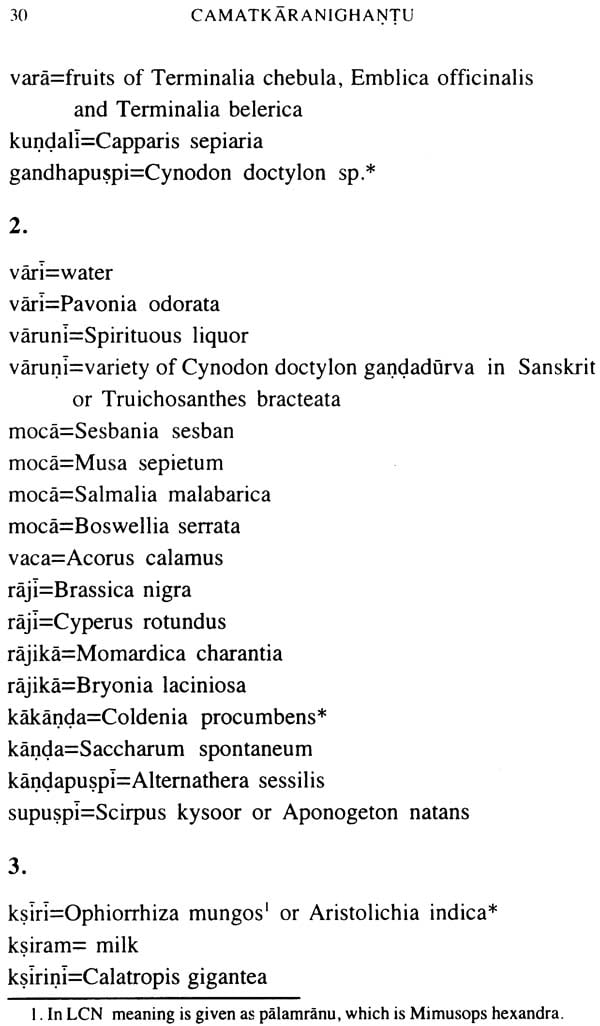 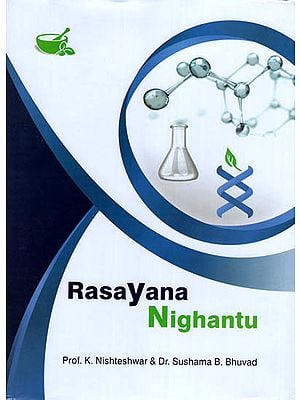 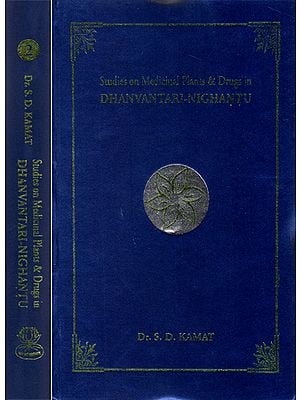 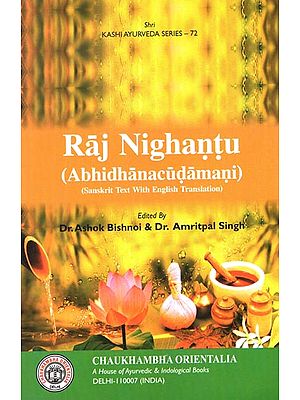 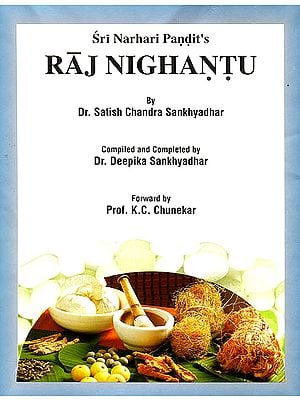 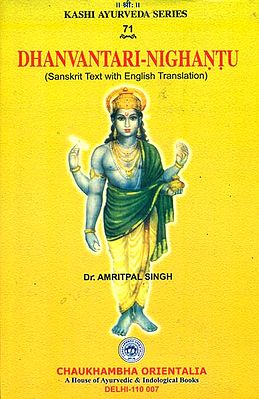 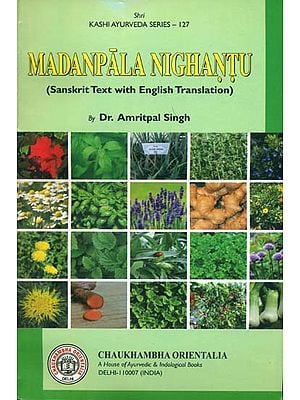 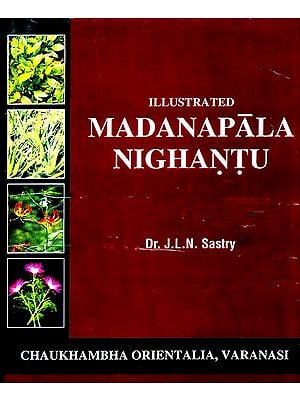 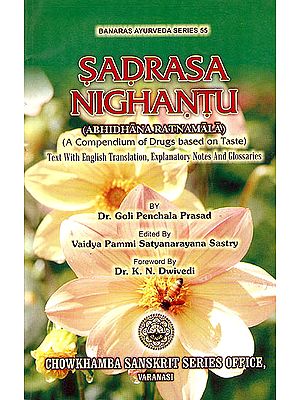 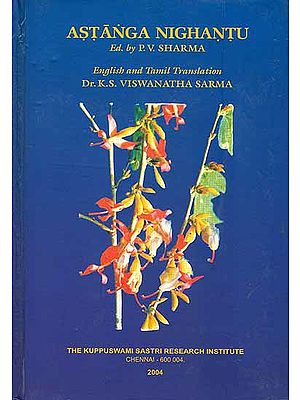 An Introduction to Nighantu Of Ayurveda
By Dr. D. Shanthkumar Lucas
$31
FREE Delivery 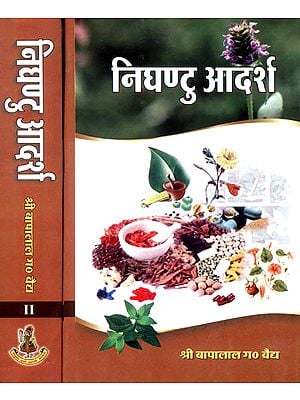 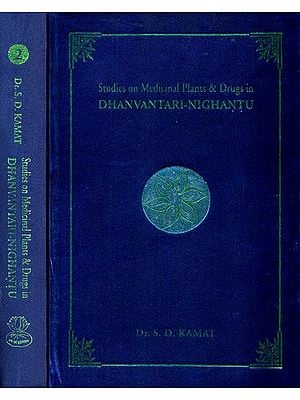