Centres for the Promotion of Indian Music 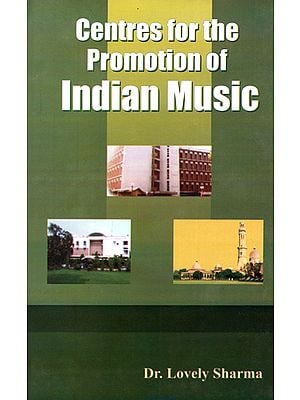 Music has been termed as a very strong source of inspiration behind inculcating human values in an individual. It not only softens the hardliness but also instils the attributes of tolerance, love, and a sence of brotherhood among human beings. Keeping these factors in view, university, as perceived by our first Prime Minister, Pt. Jawahar Lal Nehru, a university could render a yeoman's service to music education in India. The present work is based on extensive field research and survey in different parts of India on Hindustani Classical Music. It contains detailed information on the centres where Indian classical music is being taught and about the organizations which are working for the ' promotion of Indian classical music.

Dr. Lovely Sharma is a Sitarist and Musicologist of International repute. She is the first D.Litt. awardee in Sitar. She has been recipient of Barsari Scholarship and National Scholarship. After receiving Gold medal in M.A. (music) she has never looked back. She did her Ph.D. degree from M.S. University, Baroda under the guidance of eminent Tabla player Prof. S.K. Saxena. Dr. Sharma immediately got opportunity to join music department of D.E.I. University as a lecturer in 1987. since 1997 she is the senior most Ph.D. holder in her department. Due to her global recognition, she has been invited at various international forums as a music therapist (Australia in 2005, Sweden in 2006, Italy and Argentina in 2008). She has been honored as a Sitarist by Iran Art Academy, Iran. She was also invited for an international conference held in Malaysia as Music Educationalist as well as Sitarist. Hence she had to work hard continuously to give justice to all the recognition which sharpened her skills and expertise to such an extent that she is today an internationally renowned personality in the field of Hindustani Classical music. Dr. Sharma has presented nearly 35 research papers in various national and international forums which were well received. She has published around 30 research papers in various national and international music journals and books. She has been guiding number of research scholars on different aspects of music. Her unique project work entitled "Effect of Music on prisoners" throws light on her character to accept challenges and to contribute to social welfare. She was also awarded best teacher's award in 1999 at Delhi and Kalabhushan award in 2004 by Dr. B.R. Ambedkar University, Agra etc. for her hard work and determination to work for the upliftment of Indian Classical Music. Her book on 'Rajasthani lok geeton ki shastriyata' was published in 2005. She is an external expert of around 30 Indian universities apart from UGC, Delhi and RPSC, Rajasthan. She also organises frequent national and international workshops on Indian Classical music in various parts of India to promote Indian Classical music.

Several government and non-government centres have been established in India after 1947 to promote art and culture in our country. During my research work, it was noticed that music students, scholars, researchers and even teachers are not fully aware of the activities and facilities extended by various organizations. The present work is an attempt to provide accurate information on all these organizations. A list of Indian universities and colleges has been compiled covering some of the institutions where department of music has been established. But because of the large number of Indan zmiversities, the detail of selected universities have been included th this volume and the remaining universities will be discussed in the Volume-II. Another list of non-government institutions working for the development of Hindustani music has also been given in this book. The reader can find detailed information one history of the institutes, foundation of music departments, past and present faculty members, training procedure, courses offered, facilities available in the centres, requirements for the research projects and funding of the projects etc. It is believed that this work would act as stimulant for research scholars to enhance the role of eminent centres for propagation of Hindustani music and also serve as a useful me acne manual not only for teachers, students and scholars el music but also for all those who are interested in music.

"We cannot but hope that in a few years there will be an easy system for the instruction of our music, which will lend itself to mass education. Then will the ambition of India be fulfilled, an Indians will have music in the curricula of their uni-versities and music instructions will be common and universal". Pt. Bhatkhande could conceive of classical music as accessible if not to the masses at large then at least to a considerable portion of society. He thought to institutionalize music as the way to achieve this In our country training of classical music had always been in the tradition of Guru-Shishya (preceptor and disciple), i.e. by the method of individual attention. Only talented individuals were trained by adept teachers — the Guru or Ustad training just one or two disciples at a time. It occurred to Bhatkhandji that if sister-arts like painting and sculpture were being taught in schools and colleges, then why music could not be institutionalized. In passing, it is worth mentioning that in ancient India, universities of Taxila, Nalanda etc. had music in their curriculum. So the idea of institutionalization of music is not absolutely new to India. Like most things, this subject, too, has its pros and cons, its disadvantages as well as advantages. On the one extreme are the conservative maestri who insist that learning music calls for individual attention every moment. On the other extreme are private institutions (with incompetent teachers and indifferent students) manufacturing "musicians" and issuing certificates year after year. In the present time, with greater awareness for classical music among the people, the way out could be to employ competent teachers and admit talented students. .And, of course, as with any other branch of learning, commercialization of music should be condemned at very step. In this scenario of individual attention, vs. collective instruction, Dr. Sharma has for drawing meaningful conclusions made extensive survey of teaching systems of Hindustani Music. She has taken great pains to collect her materials from primary sources, which lends authenticity to the work. It goes to her credit to have critically examined promotional efforts of a number of institutions, organizations, societies, associations, centres, etc. of music in India. It often happens that a musicologist is bereft of the art of music. In the case of Dr. Lovely Sharma, it is not so. It is commendable that she is not only an experienced teacher and scholar but also a performer in her own right. Hence her observations and analyses carry weight. Considering the rich contents of "Centres for the Promotion of Indian Music", I hope its perusal will be amply rewarding to the interested reader. 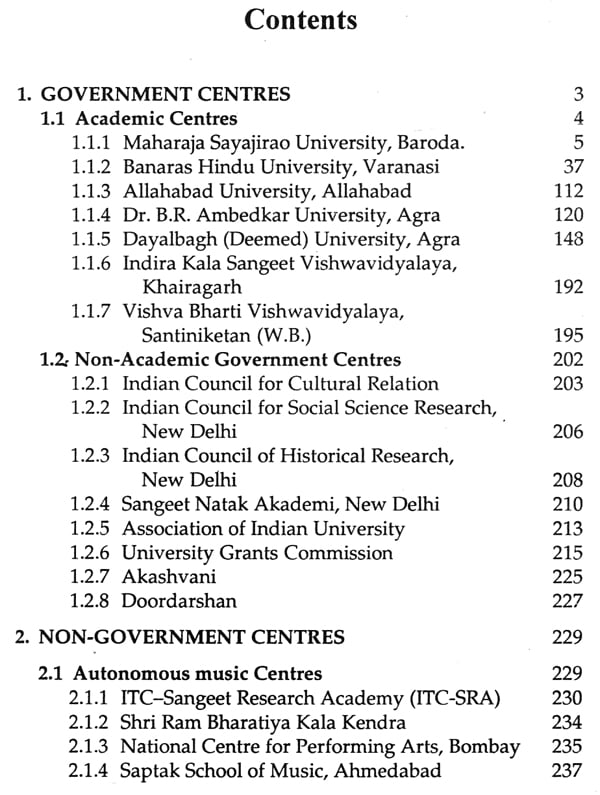 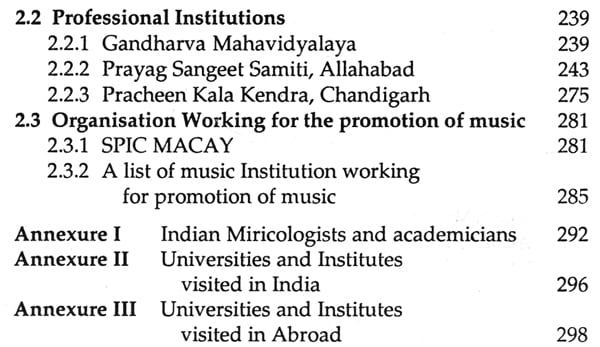 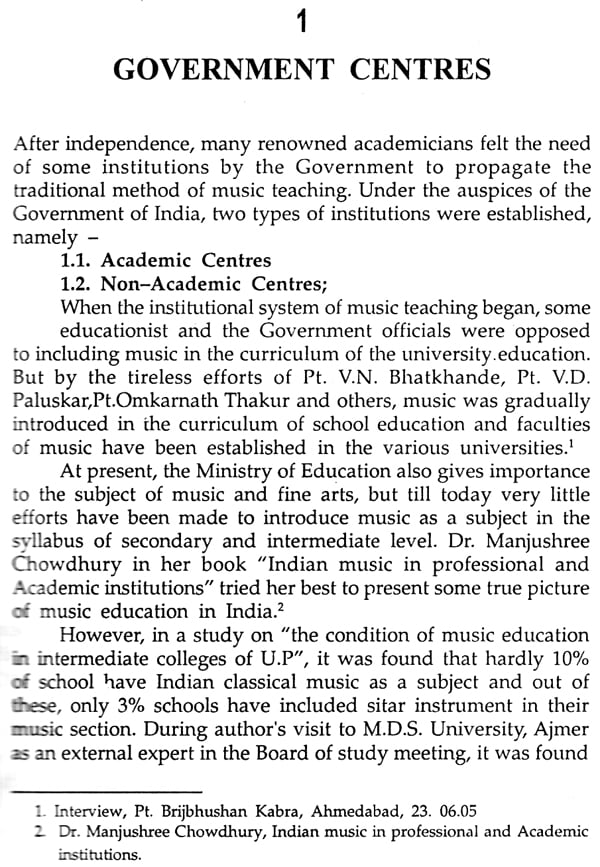 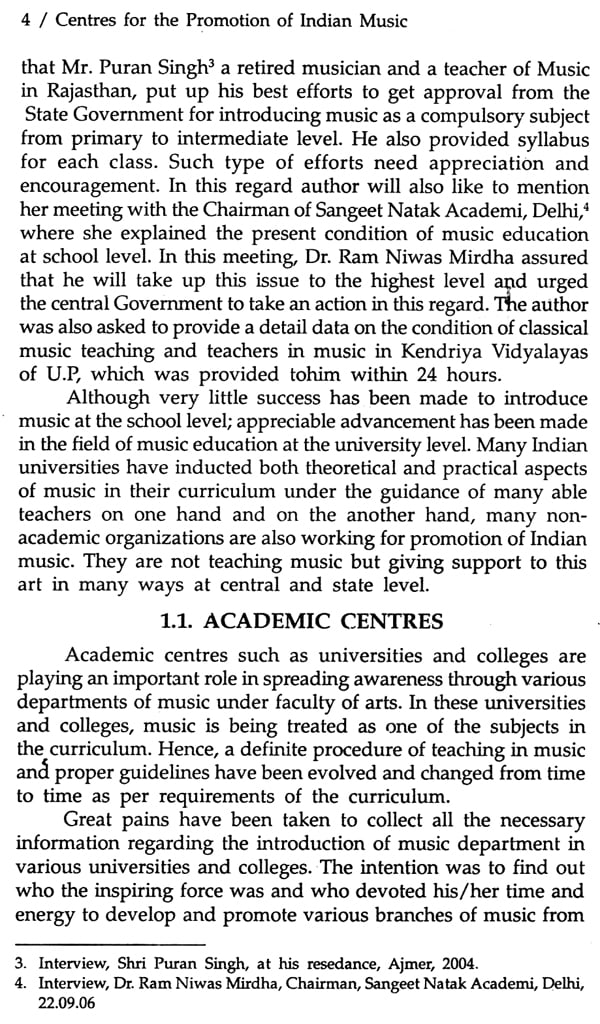 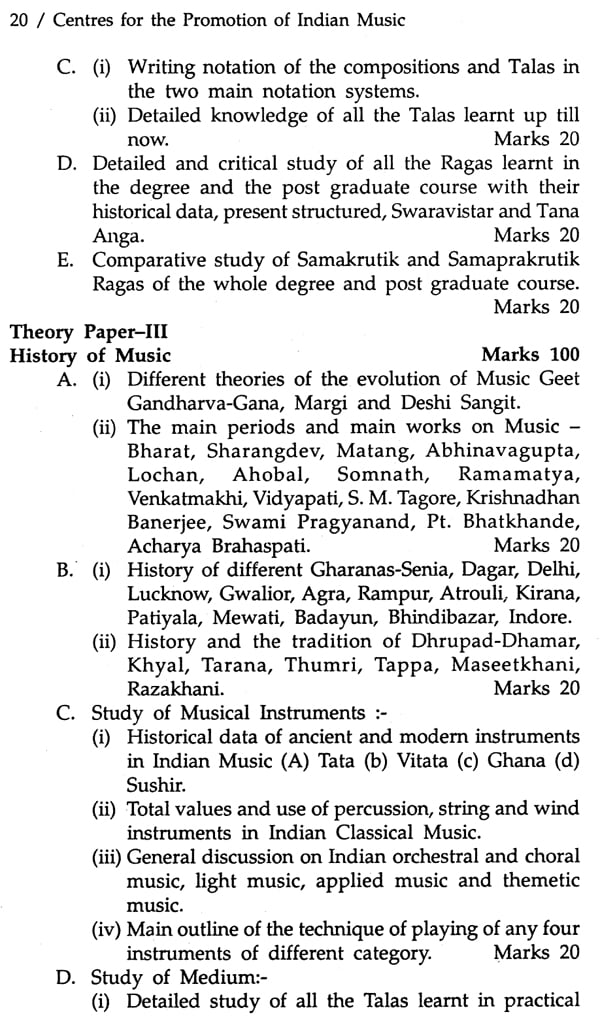 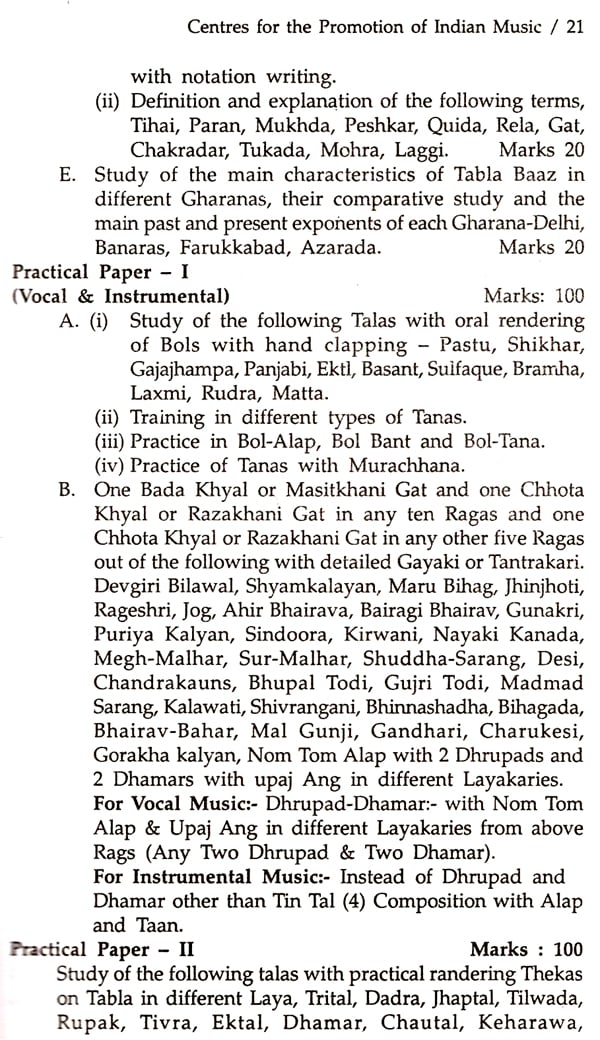 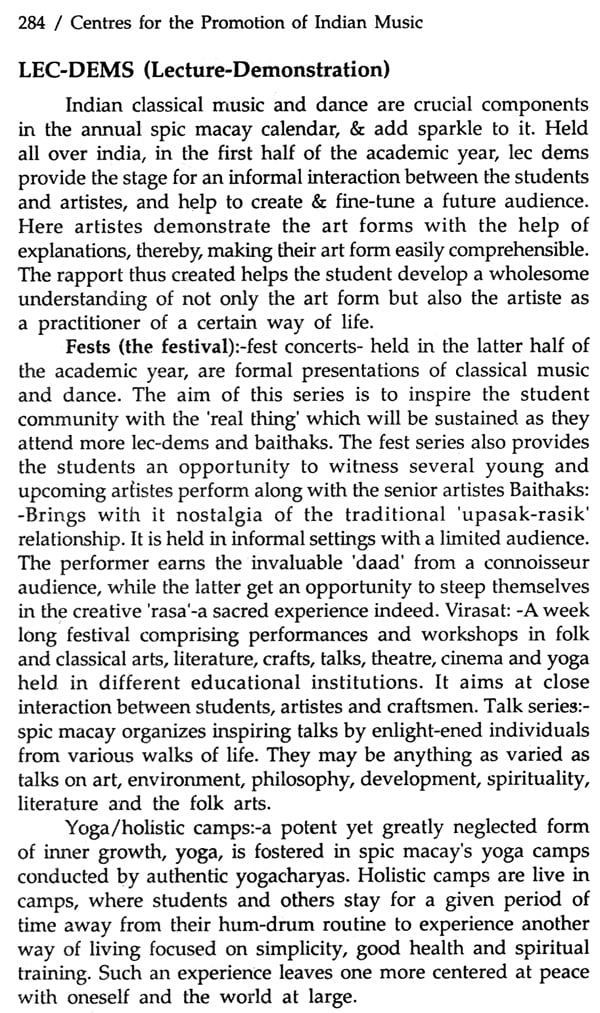 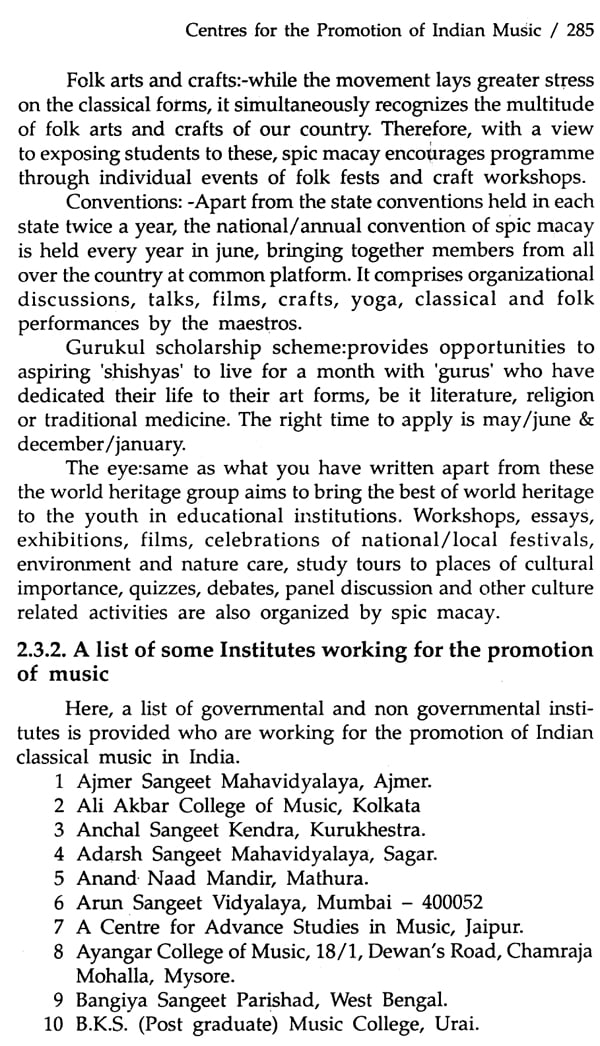 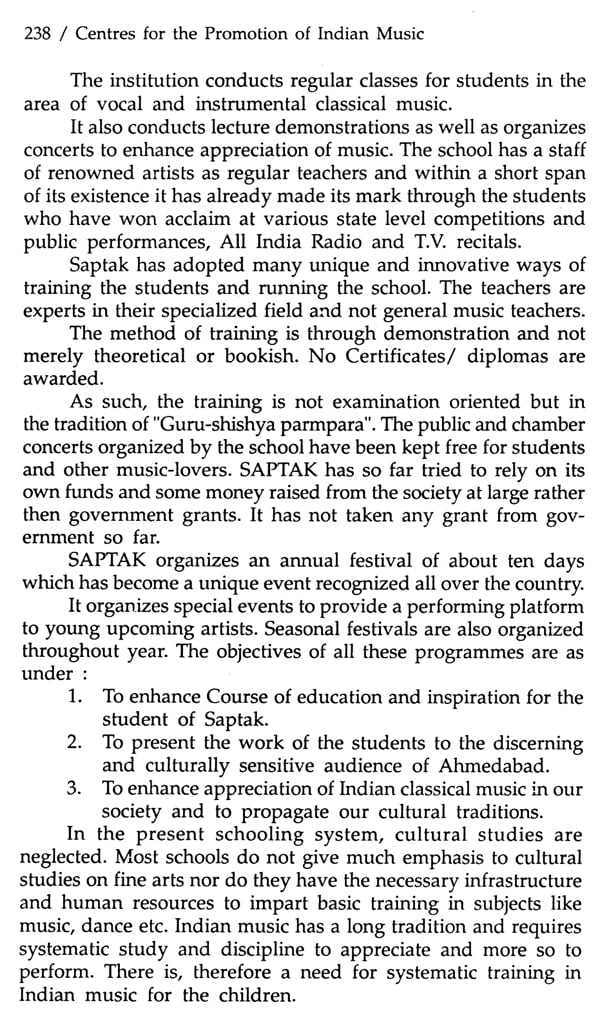 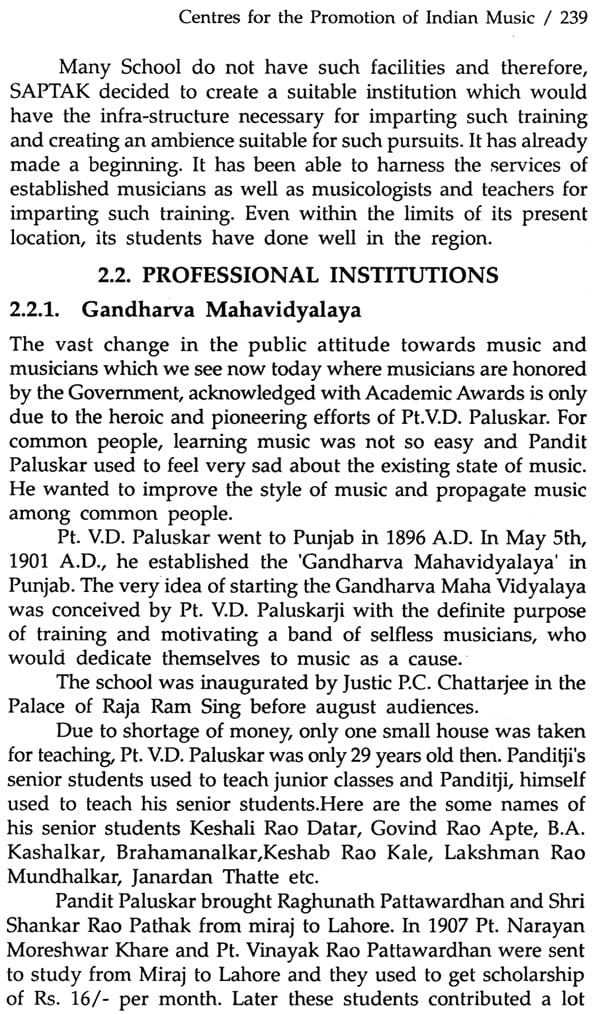