The Concise Sanskrit Dictionary (An Old and Rare Book)

The history of Indian lexicographical literature goes back to a very remote past in Vedic age when Nighantus (word books) were prepared for guidance; only one of such Nighantus now survives along with etymological interpretations and derivatives (Nirukta and Vyut-patti) by Yaska. The later dictionaries have no connection with Nighantu literature and have wide gulf with it. The continuity of both the literatures is preserved only by a few grammatical collections such as Dhatupatha and Gagapatha, etc. Of course several references of old writers such as Katyayana, Vacaspati, Vyadi, etc. are sometimes available in commentaries.

The later dictionaries were written generally by poets for poets. That is why such dictionaries are in verses, mostly in tlokas and at times in Arya metre. These dictionaries of later period differ from each other in many ways in method, scope, objectives and the order of collection of words. Thus they can be classified in manifold varieties. The synonymical ones are those in which all the synonyms are collected in one couplet. Hononymical ones are those in which the meanings of a word are collected in such a way that the word stands in nominative and its meanings stand in locative. These two kinds are called Namanusasana or the teaching of words. Sometimes one variety trespasses into the other. From the point of view of arrangement these dictionaries can be divided into several kinds. In some the words are arranged according to the first syllable and in others they are arranged according to the final syllable; in some both the methods arc followed simultaneously. Several dictionaries are not limited to words and their meanings only, but they give genders also. In some the words and genders are given side by side, while in others a separate appendix is added for genders. Many times the words are arranged separately ac-cording to their genders. In some dictionaries the words are arranged according to the number of syllables.

In a long galaxy of lexicons, Amara-Simha (about 5th century A.D), is the most prominent. He has been most popular among scholars as well as students. On his Amarakosa about 50 elaborate commentaries have come into light. A few other prominent lexicons are as follows:-

Besides those mentioned above, there is a very long list of those which have come into light recently. Such dictionaries are also of many kinds-big and small, general and on a particular topic, such as Baud-dha literature, dance, music, etc.

In recent times some valuable dictionaries have been written on modern lines following the European type of alphabetical arrange-ment. Among them the two encyclopaedic dictionaries-the Sabda-Kalpadruma of Radhakant Deva and the Vacaspatyam of Taranatha Tarkavacaspati were written in the 19th century.

Some dictionaries have also been written for the use of students. They are either very big for handling or too small to fulfil the need of students. For example, Apte's dictionary, the most popular one in this field claims to have been written for 'High School' and 'College' students, but this is a too big dictionary aiming at comprehensiveness rather than limiting itself to the need of a common student Besides, it covers the technical field also with which a student upto B.A. standard has rarely a confrontation. Therefore the need for having a small dictionary limited to classical ornate literature with only popular meanings still exists.

The present book has been written with this very aim. Here about 10,000 words of daily usage and not of any particular branch have been selected and their most popular meanings have been given in Hindi as well as in English to fulfil the need of both the mediums. Detailed grammatical derivations and etymological notes have been avoided. Signs and abbreviations pointing out important grammatical connections among the words have been provided so that a student may have some idea of word formation. It also helps to grasp the real meaning of a word. Short notes of grammatical formations have been given in the beginning.

Historical, mythological and geographical words have not been included in the main body of the dictionary; but they have been appended in the end with short notes. In order to facilitate the students in translating Hindi and English passages into Sanskrit the two other appendices have been provided, one according to Hindi alphabetical order and the second in Roman alphabetical order. There are many Sanskrit indeclinable words (Avyayas) which are used as adverbs, prepositions, etc. They have been separately appended according to Devanagari and Roman alphabetical order to give some help in translation into Sanskrit. Rhetoric and prosody have not been included as the students get their knowledge separately. A separate appendix with short notes on prominent authors has also been appended for the interested students.

It is hoped that the students of under-graduate level will be benefitted by this effort of the author. 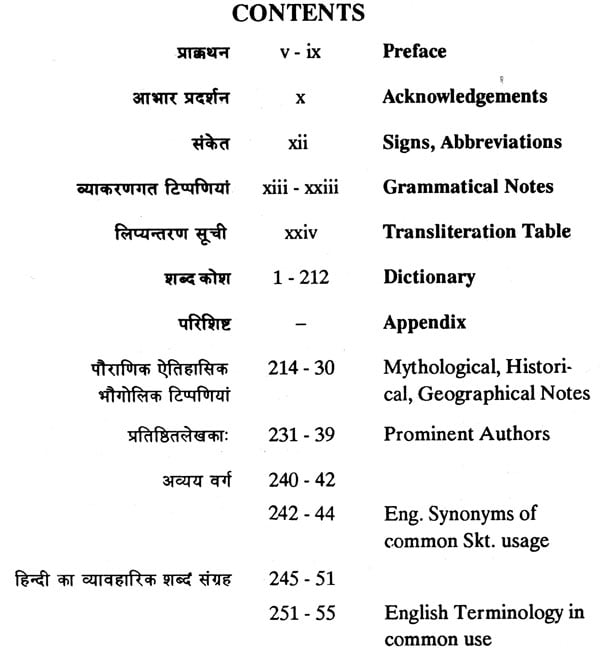 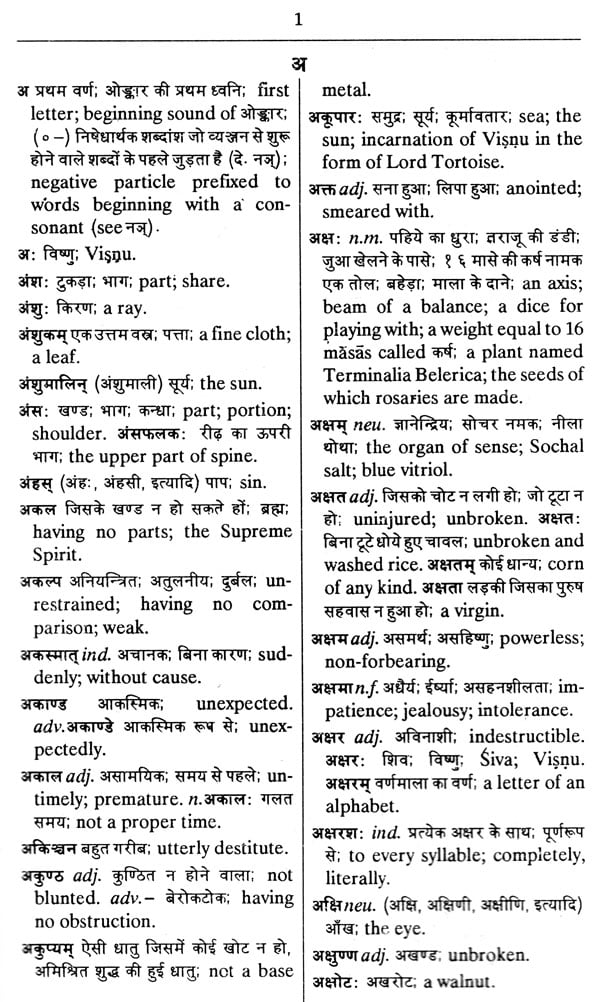 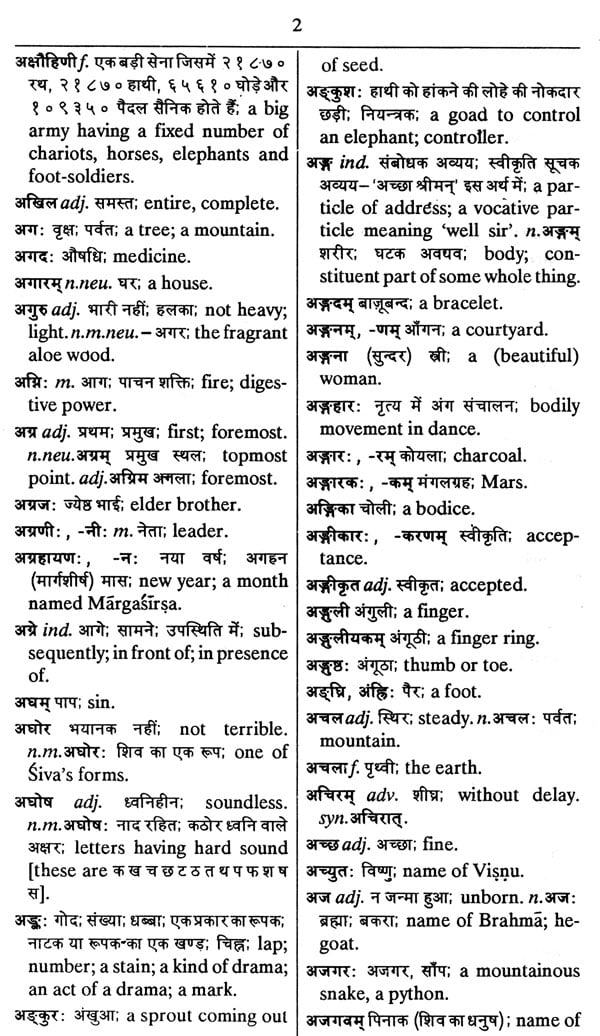 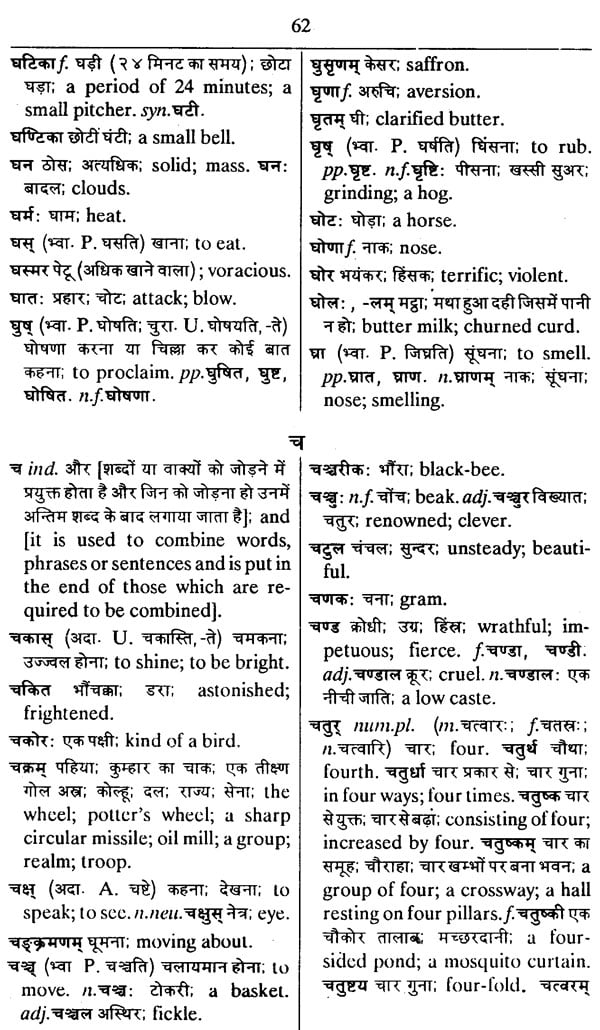 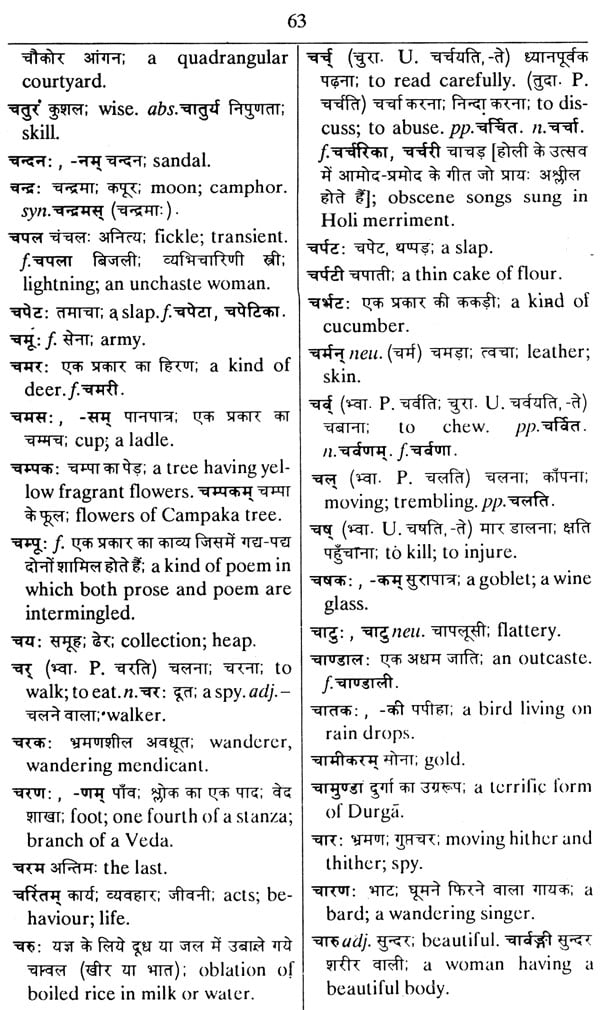 The Concise Sanskrit English Dictionary (An Old and Rare Book)
By V.G. Apte
$23
Out of Stock