The Department of Jainology was instituted at the University of Madras on 1983, on the occasion of the Post-Centenary Silver Jubilee Celebrations of the University with the donation of an endowment amount of Rupees Fifteen Lakhs collected from members of all the sects of Jaina Community and others by the Research Foundation for Jainology, Chennai 600 079. The Endowment Department started functioning from 1985. In the year 2003, the Government of Tamilnadu gave its assent for this Department to be made as a full-fledged University Department along with other Endowment Departments of Saiva Siddhanta, Vaishnavism and Christian Studies. Thanks to the assent of the Government of Tamilnadu and the subsequent resolution by the Senate and approval by His Excellency Chancellor/Governor.

During October ‘2002, the Department submitted a Project Proposal for academic and administrative activities of the Department to the Bhagawan Mahaveer 2600th Jamma Kalyanak Mahotsav Samiti, New Delhi, for financial assistance. The Mahotsav Samiti was gracious enough to recommend to the Government of India, and on the basis of the recommendation, lakhs as corpus fund to the Department of Jainology, University of Madras. Under the auspices of this, Bhagawan Mahaveer 2600th Birth Anniversary Endowment fund, the Department is conducting various research and publication works from the academic year 2004-2005.

The first book of this Endowment series titled ‘Facets of Jainism’ was published in January ‘2005 which was a compilation of 9 Papers related to Jainism in Tamilnadu.

The present book entitled ‘Environmental Awareness in Jainism’ is the second of the series of the publication under the above Endowment fund by the Department of Jainology. This book contains two lectures given by Dr. Geetha Ramanujam, Principal, National College, Jayanagar, Bangalore, under the auspices of Acharya Shree Tulsi Memorial Endowment Lecture Series 2004-2005, conducted by the Department of Jainology on 7th February ‘2005.

The first lecture is titled ‘Anuvratas – spiritual mission of Environment in Jainism’ in which the author has at length discussed the role of Anuvratas in creating environmental awareness. It summarises a non-violent approach to life and reflects a conscious concern for all life. Jainism is indeed a progressive philosophy of equanimity and the vrata-culture by Mahavira has a greater significance today, as it is an all encompassing practical and eco-friendly culture of mutual co-existence. The Transgressions of each of the Anuvrata is discussed in contemporary light, which will go a long way in solving the environmental crisis of modern times.

The Second lecture is titled ‘Environmental crisis – A Jaina perspective’. At the outset, the author enumerates the philosophy of co-existence and lists the ecological measures; the stress being on respect for all fellow beings and matter. The author rightly remarks that environmental awareness involves balancing human needs and protecting natural and cultural heritage. Environmental degradation which is the evil of modern times can be solved by man alone as he is the nucleus to the crisis. There is no doubt that if the three Anuvrata’s of Jainism namely Ahimsa, Anekanta and Aparigraha are understood and practiced at the individual level then the universal environmental crisis can be reduced by itself. Non-violence and ecological harmony are two sides of the same coin.

The above lectures written and presented with sincere conviction generate a ray of hope in modern times of environmental degradation and crisis. I hope the book is well received by the elite readers.

"Once six men lost their way in a forest. They tried to find their way out but failed. Hunger made them realise that finding food was their most immediate need. They came upon a tree whose boughts were heavy with fruits. One of the men, whom we'll just call number six said, "Let us cut down the tree and collect all the fruits. We may be stuck in the forest for a long time if we fail to find our way. So we'll need food." Number five broke in, "No, we'll just cut down all the branches which bear fruits." Number four said, "No, no. We'll just break off the twigs with fruits." Number three said, "No let us just pluck out all the fruits." Number two said, "Let us just pluck only the ripe fruits." And then number one spoke up : "Let us collect the fruits, which have fallen from the tree and are strewn all around it. They are enough to satisfy our hunger for now."

However number six overrode the rest of them and cut down the tree. The simple story above illustrates that indiscriminate, exploitation of natural and human resources will inevitably result in crisis.

Most of the people follow the example of number six. And the consequence is for all of us to see-environmental crisis of monstrous magnitude that we are facing.

The need of the hour is protection and preservation of environment from further degradation. The focus of my paper is not to evaluate environmental components scientifically or technologically, nor am I interested in elevating Jainism is relation to other religions because Jainism itself is not for such a single-sided view. No man - found religion is complete without the knowledge of other religions. Moreover the only inherent religion of mankind is compassion, love and coexistence and any preaching or practice in the name of religion that does not include the above aspects is not a religion at all. Religion misunderstood in practice and misinterpreted in the pretext of scientific temper is what exists today. "Science without religion is lame and religion without science is blind! Science can denature plutonium but it cannot denature the evil in the heart of man' remarks Albert Ein M-ein. It is time we seriously reflect on the above lines to resolve on the relationship between environment and man, and the environmental crisis. Jainism is one such religion that establishes scientifically a deep inter-relationship between environment and man, and spiritually provides a framework to realize and live the same. Jainism very clearly indicates that knowing the reality is different from living. Because "Even after listening to the holy scriptures and believing them, it is difficult to tread the path of righteousness because many people have faith in religion but they do not practice it." Knowing the reality is only something but living the reality is everything. Scientific vision is to know the reality and spiritual mission is living the reality to combat the global crisis. Jaina spiritual mission of environment certainly answers this. It is as positive and rational as its theory of Karma. Salvation by renunciations or, seeking pleasures of the after world, seeking God for liberation from this world- these are not a part of Jaina spirituality. It is rather living the life of compassion and coexistence, love and non-violence; Initiation of self into this concept of living is spirituality. The practical orientation to live the life in this manner and realize the pure Self, which dictates respect for everything around self, is spirituality.

In Jainism there is no scope for man to seek salvation or happiness by getting disassociated from his environment, for it is not a withdrawal philosophy. Unless he coexists with compassion for every other living being there is no possibility of misery - free life for him. The 'natural-human-economic' resources, if exploited for satisfaction of selfish comforts and self-centered pleasures, are certain to result in Karma, which is nothing other than suffering.

Just cognising or preaching is not same as practicing. So Jainism inducts mankind, irrespective of caste, creed, language, nationality or sex, to spiritual evolvement through practice of basic principles of life as vows or vratas in day-to-day life of common man as well as ascetic.

It was Mahavira who categorized "society into four groups, irrespective of man-made barriers: "Sravaka and Sravika, Sadhus and Sadhvis'" and was so practical in his approach that it is not just ascetics who can seek salvation from their Karmas under Jainism, but common man, including women, can seek salvation too, by living a crisis free life. This progressive attitude of Mahavira is commendable and outstrips that of any other even in the Twenty first century.

Jainism targets release of the soul from the cycle of birth and death, not by performance of man- structured bundle of rituals, yajna, yaga or visiting man-declared sacred places nor can an individual gain liberation by renouncing social concern for his fellow- beings. Rather living a life or righteousness and self- restraint is the key to exit from the cycle of birth and death.

Living the reality is introspecting and involving the self in coexistence with the law of nature. But the irony is, the law is made subservient to the self, which results .in crisis at all levels. A developed and power-hungry country built highly destructive nuclear weapons and atomic bombs that are now available with terrorist groups. Who is to be blamed for threatening the very existence of life on earth? That developed country, of course! Why did they initiate the process of manufacture of nuclear weapons? 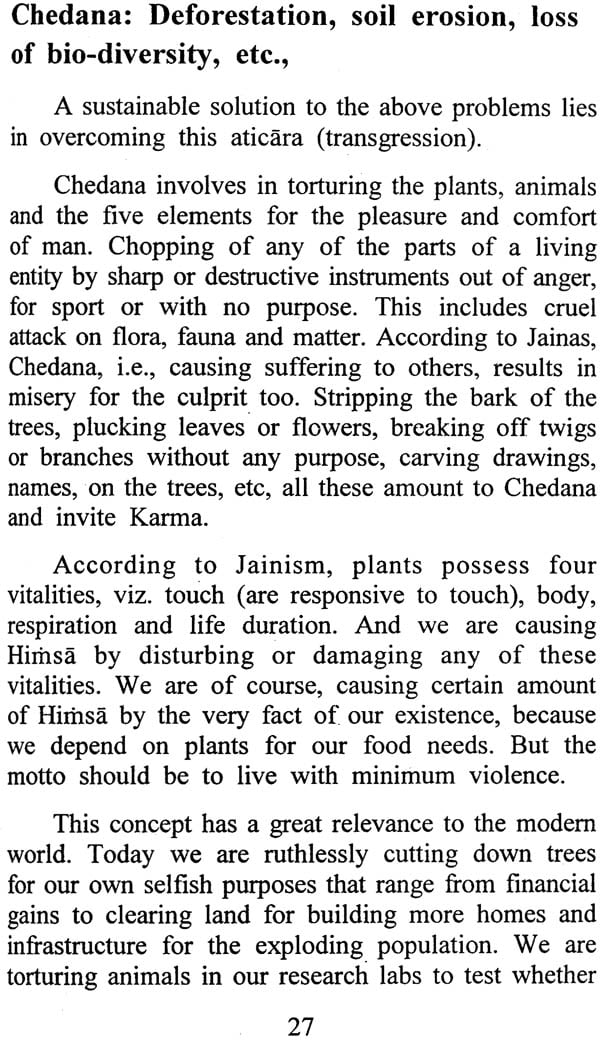 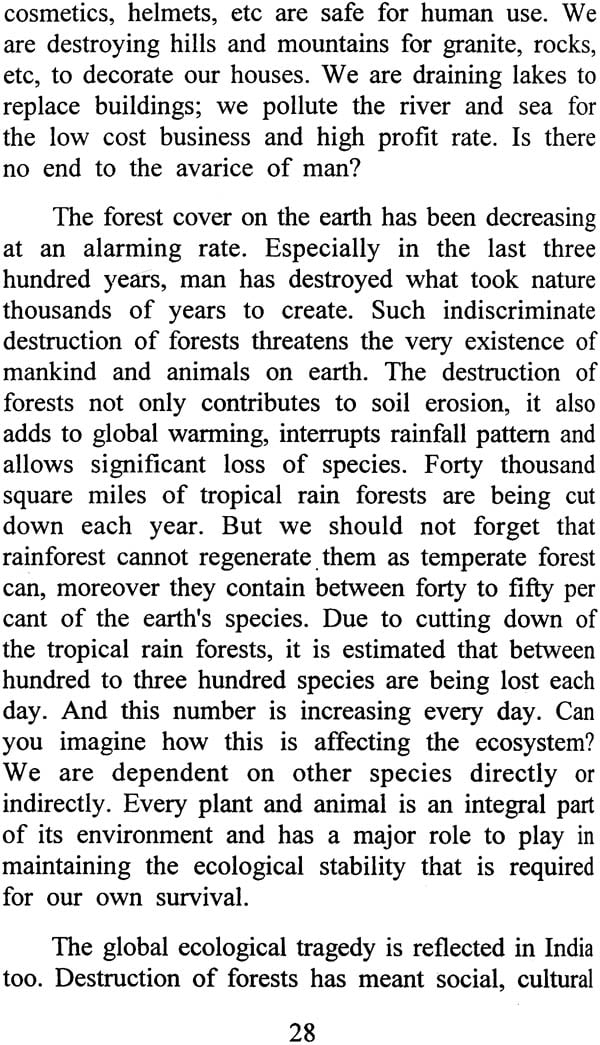 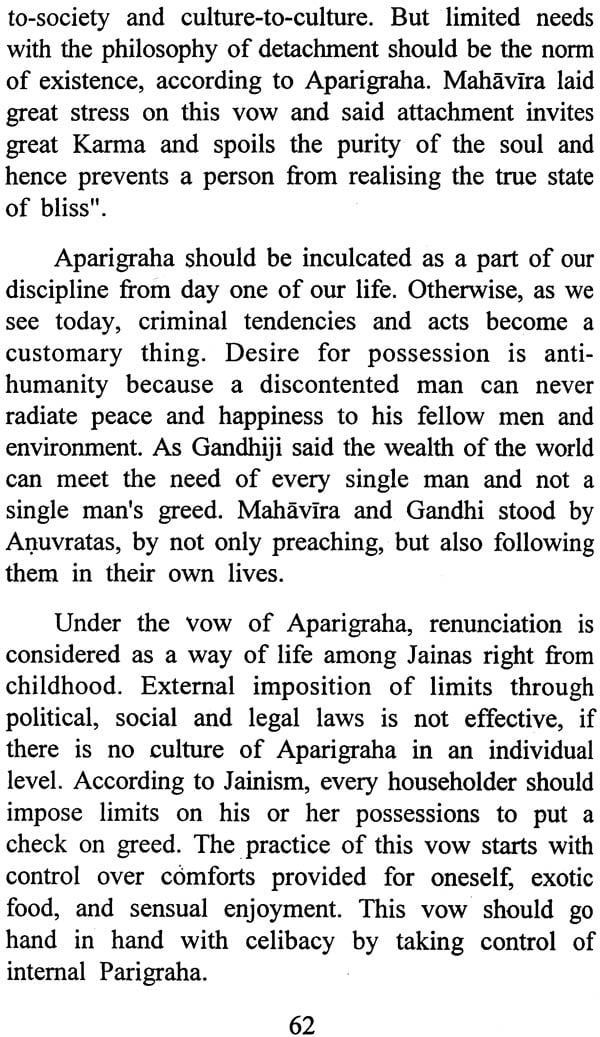 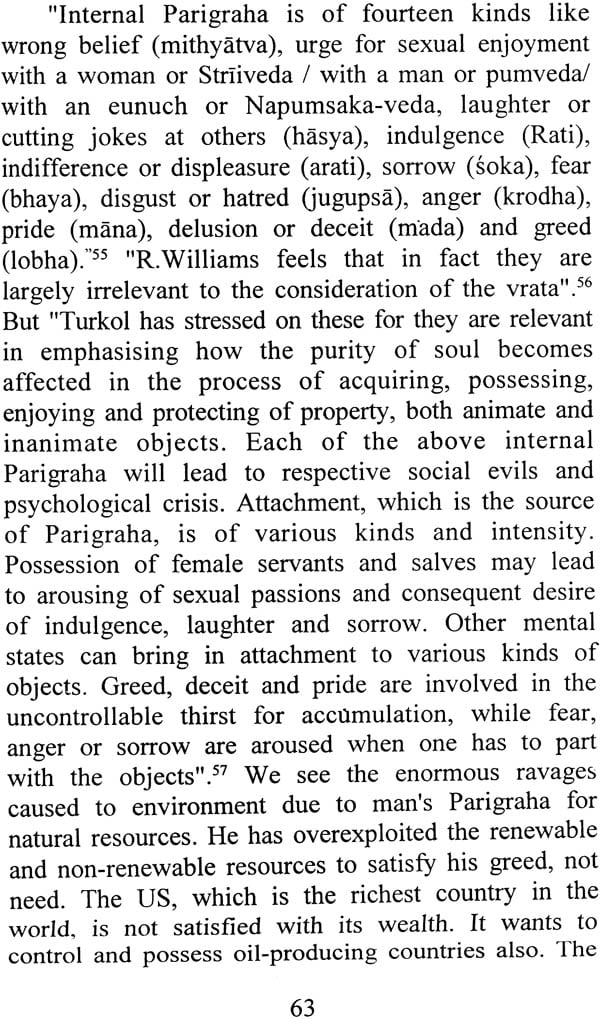 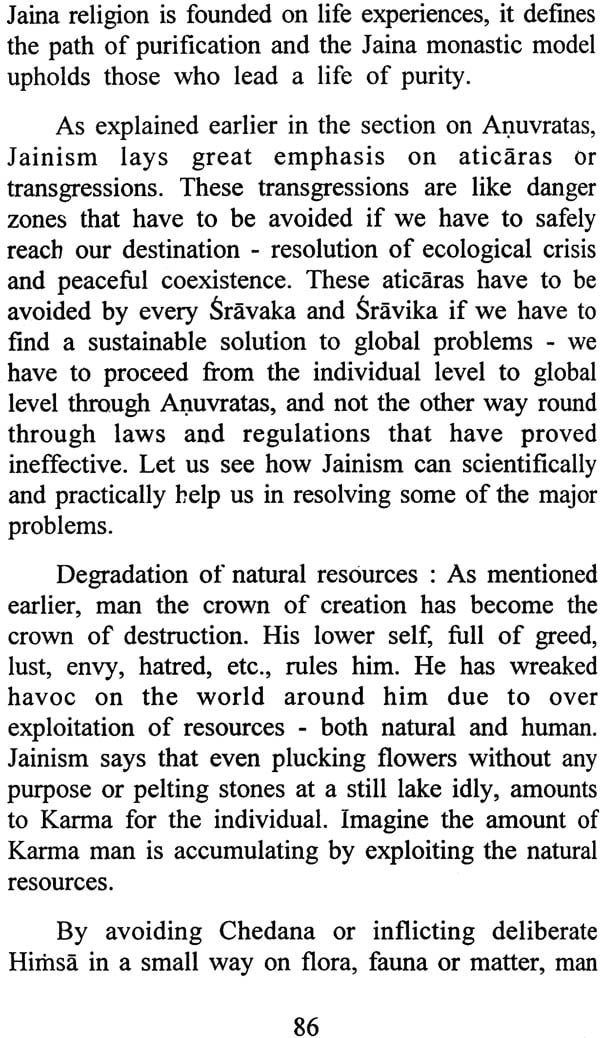 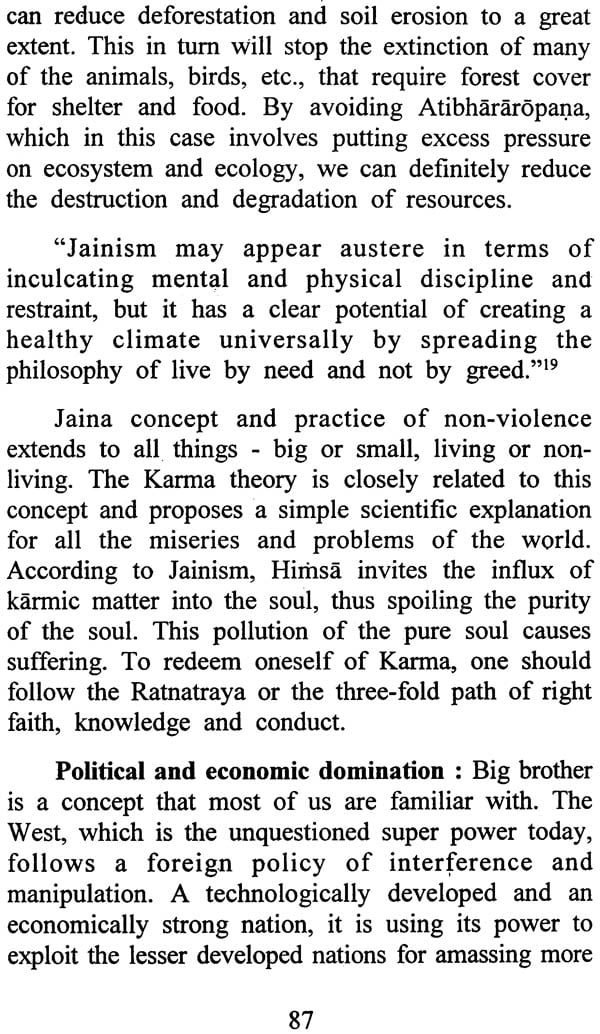 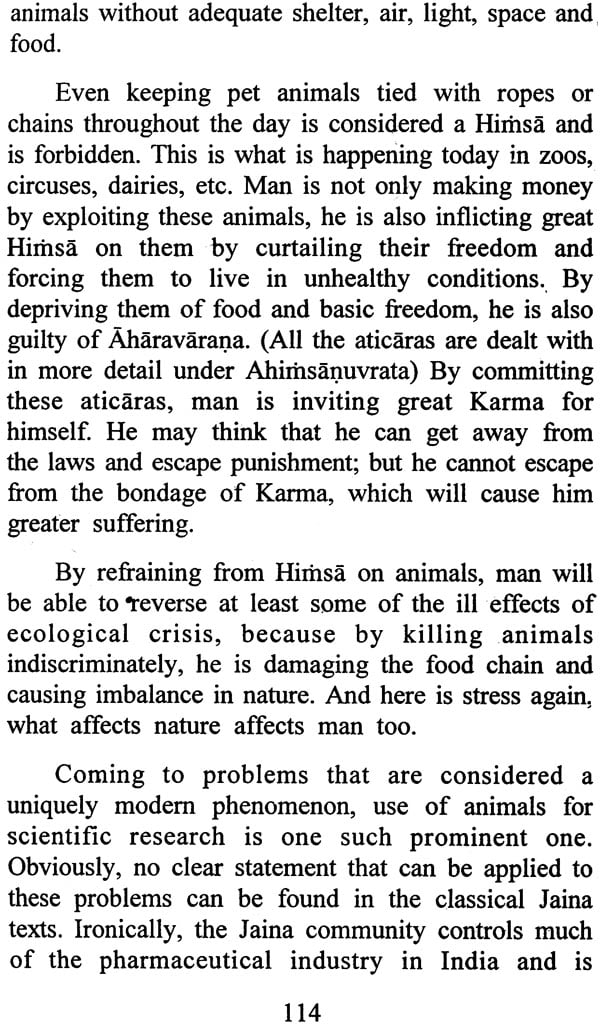 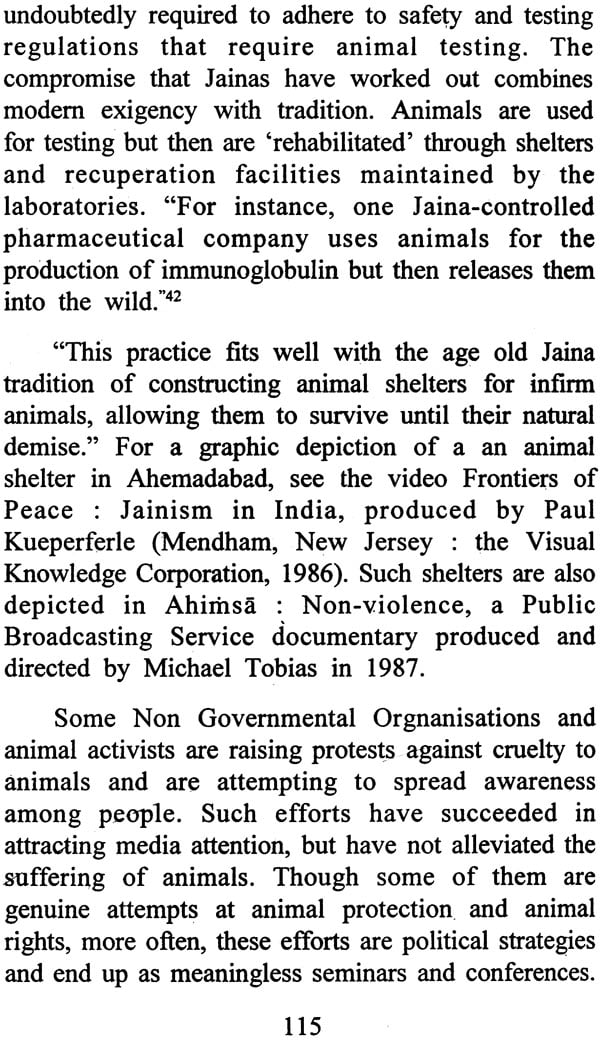 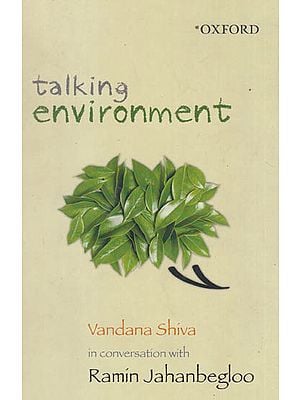 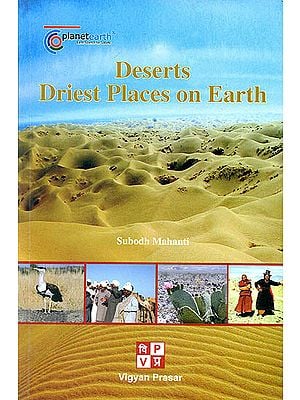 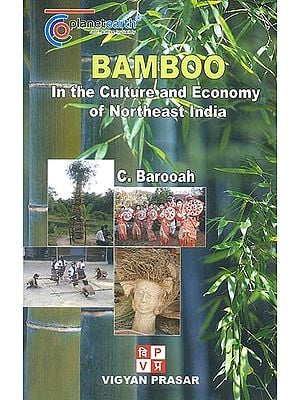 Bamboo (In The Culture and Economy of Northeast India)
By C. Barooah
$16
Out of Stock 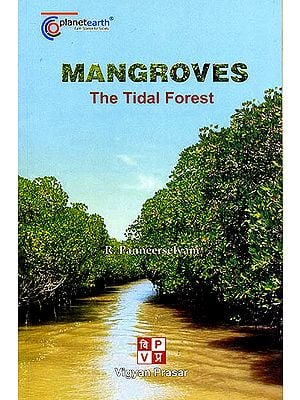 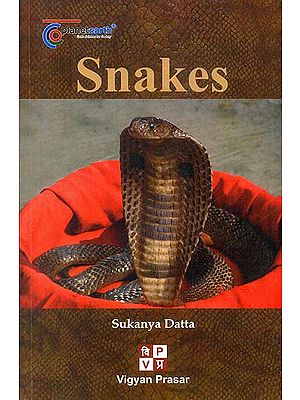 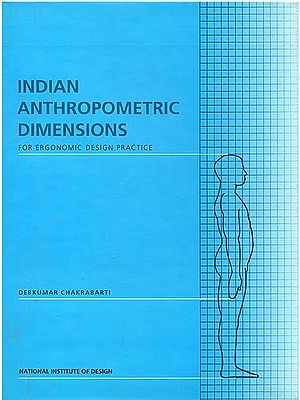 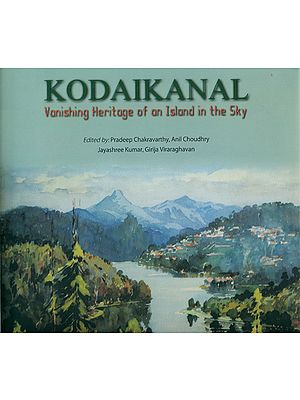 Kodaikanal (Vanishing Heritage of An Island in The Sky)
By Pradeep Chakravarthy
$55.30
FREE Delivery
$79  (30% off)