Indian Names From Classical To Contemporary 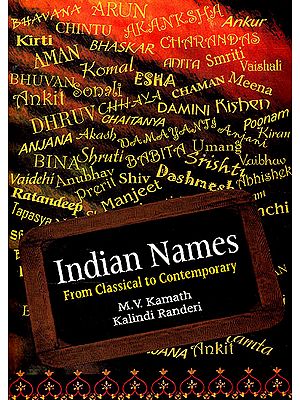 $45.00
Notify me when this item is available
Save to Wishlist Send as E-card Share by Email
Back of the Book

This is a reference book for parents to name children authors to name characters property developers manufactures to name products advertisers to name whatever they undertake to advertise information technologist to name mushrooming websites in fact for anyone to name anything.

This is the largest ever book published on the subject with over 30,000 names of Sanskrit origin.

The names are written in both English and devannagaree scripts with meaning in English.

The book contains besides the master list of 30,000 names some 25 subsection listing the names attributed to deities of the Hindu pantheon and certain human emotions and qualities.

The book is reader friendly as diacritical marks for vowels are replaced by phonetic spelling of the names. A 10 point is used to make browsing less taxing to the eyes.

The book contains an erudite chapter on naamakran Samskaar Beginning with the entire process of conception and progressing to child birth based on ancient Hindu precepts.

M.V. Kamath has had a long and distinguished career as a journalist and author with over forty-five books on a variety of subjects to his credit. Awarded the Padma Bhushan in 2004 he is the recipient of an honorary doctorate from Mangalore University. Presently Honarary Director of the Manipal institute of communication he has in the past served as chairman of Vigyan Prasar and Prasar Bharathi.

A scholar of high repute Dr Kalindi Randeri has been in the field of university education for over four decades and is the founder principal of the P.V. Polytechnic of the S.N.D.T women’s University in Mumbai where she was the first to introduce courses in fashion and jewellery designing widely traveled she is the recipient of many awards and has authored books in collaboration with M.V. Kamath.

Your name is the only thing that is unfailingly yours from birth to death and may live on be-yond that. Name is identity, name is connectedness. We are compulsive name givers and even unidentified flying objects become UFOs. Our fascination with the varieties of names we discovered, led us into the search for their meaning.

The pace of the life in the modem world leaves many people feeling uprooted. This in turn sends them in search of roots, and finding names with cultural significance is one way of establishing a sense of belonging. Not only do NRIs stick to Indian names, most Indians married to foreigners give Indian names to their children. It is our fervent hope that this book will further this desire for cultural connection not so much by providing answers as by stimulating interest. The multiple meaning given will, we hope, lead beyond the search for names.

This project first began as a compilation of names collected from friends and friends of friends. By its very nature its scope was limited to names in use. However, we immediately perceived the tremendous potential for a bigger project. We resolved to make up certain lacunae in available English books of names by presenting the names in devanaagaree script along with the roman script. This should facilitate correct pronunciation.

Along the way we became so fascinated with the etymology and derivative variants of names that we had a major research project on our hands. The wide varieties of names used by different religions, ethnic and liguistic communities in India, make such a project formidable and daunting. We had to set some parameters and limits if we hoped to have a coherent product within a reasonable time. The coherence now embraces more than 30,000 entries and the reasonable time stretched to almost six years and not more only because we took the hard decision to include only Sanskrit-based names. This decision was based on the self—evident fact that most of the major Indian languages are descended from Sanskrit.

It is important to bear in mind that a language and its vocabulary do not have a religion though1r may come to be predominantly associated with a particular religion. Though the Bible was first writ-ten in Greek nobody thinks of Greek as the language of Christianity. Thus, Sanskrit-based names should not be thought of as Hindu names. We find Sukarno and Meghaavatee in Islamic Indonesia and Pramode and Chandrikaa in Buddhist Thailand and Sri Lanka.

As word spread among friends that we were at work on this project, we were often consulted for names for places, products, businesses and buildings. People wanted names for magazines, newspapers, theatres, pets and what not. That opened our eyes to the need for a different kind of book of names with a wider base. We ransacked not only Sanskrit literature and myths, legends and prayers about the members of the Hindu pantheon but also novels and dictionaries in regional languages, to-;;in as comprehensive a listing as possible. To come abreast with the current trends we collected names of children enrolled in several nursery schools. A surprise awaited us here as we discovered many old names returning into circulation in addition to the perennial favourites. Our unfailing stand by for etymology and derivations has been the most dependable Sanskrit dictionary by Monier Williams published more than a hundred years ago in 1872.

In the process of understanding how people selected names, we gained the very interesting• insight into their preferences for names signifying certain emotions, qualities and deities of the Hindu Pantheon. This has inspired us to provide subsections for easy reference. Moreover, this is the only Feature of the book where we have departed from our self-imposed norm of including only Sanskrit-based names. Two subsections viz Raagas and Raaginees and Gems and Ornaments include name derived from other Indian languages and dialects. For entries refereeing to items form the Vegetable Kingdom e.g. plants trees and flowers we have given no further explanation than saying name of a plant/flower. The sheer beauty of the names reflects the loving relationship our ancestors had with all aspect of nature. Those who are scientifically inclined can easily find the botanical names in a Sanskrit dictionary. Some of the names of Gods and Goddesses may appear to be umangeable for daily use but since the idea was also to make the list of deities as exhaustive as possible they are included. Twenty five sub sections contain these names the meaning of which can be found in the master list.