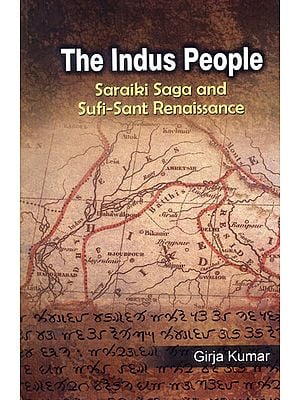 The banks of the Sindhu river, and the other northern river basins, were the theatre of the Mahabharata war and the cradle of the Indus Valley Civilisation. These are also the lands where languages and lyricism flourished. In this cultural melting pot evolved many a religion and diverse cults, Jogis and Sufis, Sikhs and Shias.

Girija Kumar's seminal work, The Indus People: Saraiki Saga and Sufi-Sant Renaissance deals with a mozaic of myths and migrations, thoughts and beliefs, cultural practices and castes, and brings to his readers a memorable work that leaves scope for further investigations into the roots of northern India's peoples and their poetry. It is a book of relevance to scholars of indology, history and sociology, and is of equal interest to the students of military history and mythology; it is a book for the subcontinent watchers who want to know where India and Pakistan are coming from, and how their present reflects their past.

Time stopped ticking for our family in 1945, two years prior to the partition of India. We departed from our sweet home, not knowing that we shall never return. It was a semi-desert, with sand blowing across our faces and entering every crevice in our bodies, but we loved it.

The present book is a journey of self-identity and the discovery of India beyond political frontiers. It is a pilgrimage to a homeland no longer accessible to millions who migrated across the artificial borders. While it shall remain a personal odyssey and a voyage of discovery, this book shall also be a carnival of collected memories and a book of record for future generations. The idea is a civilizational concept of shared experiences through historical times.

Very soon the cobwebs began to clear up for me and political boundaries began to fade away. The earnest search for self-identity began in a state of divided loyalties between hometown (janmabhoomi) and the place of adoption (karmabhoomi).

My peoples' romance with their homeland began about 450 years ago, both in miri (state craft) and piri (dharmic pursuits). There were close connections with the Moghul court, Sikh rule and the Raj. It hurts to be non-entities in the affairs of the capital over the last seven decades.

The Saraiki loyalty has been a driving force for self identity for the natives of the Middle Indus Valley in recent years. We are too proud of our Saraiki identity. Although a late entrant, the Saraiki sub-nationalism has emerged with a bang. The creation of Saraiki identity has inevitably involved caliberated choice of a language (now termed Saraiki) as a symbol of this identity. There is no such thing as a Saraiki race. It is the language that subsumes self-identity for the natives. Thus language and culture have a common identification.

Saraiki was earlier known as Lahndi. It is one of the oldest Indo-Aryan languages, with its roots going back to the Indus Valley Civilization. It is essentially a Prakrit language and it came into its own after Sanskrit ceased to be the language of discourse by he 6th century BC The Sanskrit language was born and bred on the banks of the Sindu-Indus river and its subsidiaries, the divine language was a Saraiki gift to the subcontinental civilization.

The real transformation in shaping the language took place with the advent of Baba Farid (1175-1265 AD), more popularly known as Faridu'd-din Shakar. He was undoubtedly the pioneer in laying the foundation of Saraiki literature, hitherto confined to the oral tradition and limited to recitations of folk tales and stories conveyed from mouth to mouth.

The rise of modern languages as understood today is owed to Baba Farid's writings in his native language Saraiki. The very fact that the sacred book of the Sikhs incorporated the poetry of Baba Farid among sacred writings is sufficient proof of the continuing dialogues between several communities of North India.

There is a magical quality about the waters of the Indus and its five subsidiary rivers. The literary giants born and bred on the Saraiki soil invariably have the liberal Sufi connection. However, they are yet not widely appreciated. Bulleh Shah, for instance, had to wait for nearly a century before his kalam was recorded. They look so contemporary and modern and are much ahead of their times. Without exception, they were the protestants of their age and proclaimed their apostasy.

Saraiki literature is an expression of liberal thoughts at its secular best. Here were the pioneers of the Hindu-Muslim dialogues. They chose to be in constant touch with the leaders of the Bhakti movement. Sants and Sufis kept the lines of communication open in the most turbulent times of Medieval India via their sane and wise expressions. They spoke the people's language. They were social reformers and vehemently opposed to orthodoxy and these were reflected in their writings.

Religion is more of an experience than a code of conduct in the sub- continent. Personal God is one the greatest inventions of human ingenuity. The intellectual mix contributed to this. While the Bhakti movement travelled from South to North, the Sufi cult travelled in the reverse direction. They met half-way and the sangam of Sants, Sufis and Yogis resulted in the foremost exposition of the liberal tradition.

They were all instruments of social transformation. The modern Indian languages were a singular tribute to their native genius. The peoples' languages such as Saraiki, Punjabi, Sindhi, Urdu, Kashmiri and Hindi arrived on the scene.

The aesthetics of Sufi-Bhakti movement cults were expressed best through music, dance and drama. Indian classical tradition has deep roots in the same tradition. The Khyal, Quawali, Dhrupad and Baul music owed to the same culture of love and devotion and they were like a breath of fresh air during the times of sustained political and social turbulence.

Among the multiple identities, the brand Indus stands out. The saga of Sindhu-Indus is unique in the civilizational history of the subcontinent. The Rigveda called the river Sindhu. The very name of India is derived from Indus. Everything is unique about the 'he-man river' (male river) from the beginning to the end.

Sindhu was revered as one of the gods during the Rigvedic times. Rigvedic gods were incarnations of natural phenomenon like rain, fire, wind and rivers. They were essentially secular beings. Even today there is no river in the subcontinent to match its wayward grandeur. Its destructive capabilities are well-known. Max Mueller has called it the 'constructive- destructive Sindhu'.

Its ascendancy has been recognized throughout historic times as a sacred river. There is an episode of The Mahabharatha in which the gentle Yudhishtira is advised to go 'where the Sindhu unites with the Ocean' near the Rann of Kutch in Gujarat, and further, he is told to visit Panchanada, where the five rivers of Punjab merge with it.

The banks of Indus are also dotted with Sufi Khanqahs. Those are properly known as river saints. Shah Abdul Latif of Bhet in Sindh has been pronounced as the Voice of Sindh and a Sufi of the highest order. He was a vocal exponent of Sindhayat or the Greater Sindhaco, the cause which motivated him to travel to Dwarka in Gujarat, believed to be the place where the Indus joined the sea during ancient times.

The Mahabharata has been called itihasa but it is no history in the ordinary sense of the term. It is a storehouse of historical events concerning the Saraiki people and can be applied as a benchmark for a careful reconstruction of Indian history.

Its geography is fairly accurate. The boundaries of various kingdoms in which ancient Punjab was divided are accurately aligned with river courses. The Sapta Sindhu rivers mentioned in the Vedas and the cities and towns mentioned in the great classic are real. Saindhava horses, which were imported from this part of the world, have been accurately described. The fondness, with which they are described, is amazing.

The Mahabharatha was a war between the kingdoms of the Indus basin arraigned on one side, and those of the Gangetic plains further east ward. The main supporters of the defeated Kaurvas were six kingdoms of ancient Punjab. Contemporary hostilities too extend to the same lands.

Caste has earned a bad name. It, however, served a useful purpose at that time. It was one's signature and identity. It helped to place one's geneology and personal history in context. It gave one an identity amidst the mass and provided security. It did serve useful historical, sociological and anthropological purposes.

It is' possible to write an accurate sociological history of ancient, medieval and modern Punjab by mapping the close relations of Hindu (and Muslims) castes such as Khatriya, Khatri, Arora and Sarasvat Brahmins.

It is the hilly tract of Potohar plateau near Islamabad and Taxila, bordering the mighty Indus, which is believed to have given birth to present day Khatri and Arora communities. They spread their wings towards Multan and Sindh in south-west, besides making Lahore, the epicenter of their activities.

The Sarasvat Brahmins originated from the banks of the now defunct Saraswati river, and spread their wings all over the subcontinent. The Saraswats were the traditional priests of Khatri and Arora communities and were as liberal and unorthodox in their worldview as Khatris and Aroras. To their credit they were as iconoclastic as our Sufis and Sants.

No wonder, these communities have collectively made a substantial contribution to the intellectual, administrative and professional (industrialists) leadership of India and Pakistan. All the Sikh guru belonged to the Khatri sub-castes. There are a plenty of Muslim Khatris known as Khojas in Gujarat and Punjabi Sheikhs in Pakistan. Prominent contemporary Punjabi Sheikhs include among other public figures Najam Sethi (Friday Times) and well known industrialist Mian Rafiq Saigal.

There must be a little bit of Sant, Sufi, Yogi, Baloch, Pathan, Kirar, Khatri, Arora, Sarasvat, ancient Khatriya, Buddhist, Hindu, Muslim and Sikh residing in each one of us. Equally their must be an iconoclast and apostate residing in the inner most recesses of our minds activating our moribund subconscious. There is also a little bit of jehadi bravado clamouring for attention in each one of us. The ancient Khatriyas and equally, our contemporary jehadis, are motivated to violent death and destruction to achieve mythical heavenly abodes. 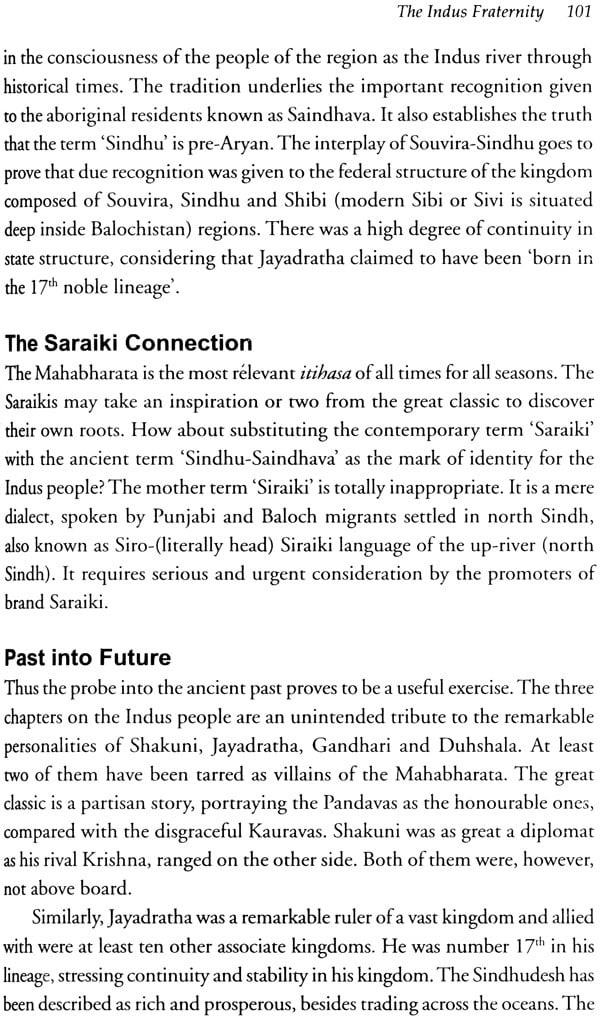