It is the solution given by Sage Vasishta when Sri Rama was caught in the storm of doubts regarding the ultimate nature of Supreme-self.

It is the solution in the form of logical deductions and practical observations for a better understanding of the nature of Supreme-self.

It is a correlations of apparently divergent references of Upanishads.

It is a poetic classic but allegorically explains the absolute and presented in his unique, graceful way by the sage poet Valmiki

It is a presentation from Brahmasri Kuppa Venkata Krishna Murthy, the Vidyadhikari of Avadhoota data Peetham Mysore in the form of his “Musings on Yogavaasishta – III (Sustenance)” – a treatise of comparisons and correlations of the ancient traditional knowledge and the modern scientific knowledge, through his lectures in the Gemini T.V on “Yogavaasishta”.

The series of my Discourses on Yogavaasishta being televised by the Gemini T.V. for the last four years as well as the two earlier books published in Telugu and English based on these talks have received an overwhelming response from the public. I am particularly pleased to note that there are, amongst them, many young men and women, natives and NRIs, who are attracted by the subtle and straightforward logical approach adopted by Yogavaasishta in establishing the illusory nature of the world.

I present to you now the book on the Fourth Chapter of Yogavaasishta as Part III: Sustenance. I originally intended to bring out a book combining the fourth (Sthiti) and fifth (Upasamana) chapters together. However, readers desired that the fourth chapter should be brought out as a publication as the discourse on that chapter was completed and waiting for the completion of the next chapter would delay the publication. So this volume, small in size but robust in content, is now printed.

Dr. D. R. Rao and his wife, Srimati Vijaya Rao who kindly supported the publication of English and Telugu versions of the earlier volumes are funding the publication of Part III too and benevolently making it available to the devotees on the occasion of the 64"‘ birthday of Jagadguru, Parama Pujya Shri Ganapati Sachchidananda Swamiji. May the unlimited grace of the Reverend Guru be with this noble family, their children and their future generations!

Dr. Vemuri Ramesam, a senior reputed scientist was kind to render into English this third Part of the series, diligently going through each of I the words with me for clarity for readers in English. Dr. V.S.R. Moorty, a reputed chemical Engineer and a Philosopher has kindly gone through the draft version. May both of them and their families be blessed by the benevolence of Respected Guru Shri Ganapati Sachchidananda Swamiji to enable them in experiencing the final goal of all Knowledge!

We presented the transliterated version of original Sanskrit slokas whenever they were quoted using the Itranslator of the Omkarananda Ashram, Rishikesh, 249192, Uttaranchal, India. The software is simple to operate and those desiring to have the slokas in Devnagari script can print using the transliterated text. Itranslator is downloadable from their website: wvw.omkarananda—ashram.org. We express our gratitude to Omkarananda Ashram for the software.

Some writers referred to acquiring Vedantic knowledge from scriptural texts as “Jnana" and experiential understanding of the same as Vijnana, while others considered knowledge dealing with material objects as "Vijnana" (Science) and the Knowledge that leads a person 4 to liberation as "Jnana". All such apparently contradictory usages of the words arose because, in a sense, "Vijnana” itself manifests as Jnana and Jnana manifests as “Vijnana " and both knowledge and realization become one and the same in the end. Inspired by Reverend Guru Shri Ganapati Sachchidananda Swamiji who understood this secret, I have become instrumental in establishing the Institute of Scientific Research on Vedas (I- SERVE) with the aim of understanding the Supreme through a study of the physical principles. For those interested, details with respect to I-SERVE are appended to this Preface.

I am including the introductory note of mine written for Part I — Vairagya and Mumukshu Prakaranas in this book. I trust the readers will get an overall idea of the original Yogavaasishta from this.

As a matter of fact, I too was a listener to the discourses! I too am a reader of these compilations!! It is some one residing in me that makes me speak and pushes my pen to scribble!!! I pray to our Reverend Guru Sri Ganapathi Sachchidananda Swamiji to bless us all so that we will have an experiential understanding of the compassion of that One!

‘Yogavaasishtam’ is a very useful book for all those who know many things in the spiritual line, or who do not know any thing in that line, and who wish to enter into that line. To know about spirituality is different and experiencing is different. Our endeared devotee Kuppa Krishna Murthy experienced spiritual flavor in all the three ways due to his continual presence at the feet of Sadguru. So your Swamiji has been using him as His mouthpiece to serially analyse and explain this rare classic the way He wanted through the TV Channel for his devotees and the entire mankind at large and also go this trentise written by him.

Writer’s Appeal
(For Yogavaasishta Part – I)

Why should one muse over a book?
To see clearly what is hidden in the heart of the author.
Why does an author hide his heart'?

He does so to make it more luminous for those who find. So the poet hides his heart in the petals of words and not in the iron boxes

His heart should reach the readers, but only to those who strives to get it. This is the view of great poets! It is the inner vision in their creation.

Though my effort in writing ‘Yogavaasishta’ is not considerable, it is through the grace of my revered Sadguru Sri Ganapathi Sachchidananda Swamiji that the heart of the Sage Poet Valmiki has been revealed to me without much effort and it continued to be the feeling in the throughout the exercise. It is my fortune. The Gemini TV Serial telecast of the discourses on ‘Yogavaasishta’ enabled me to share my musings with my brother readers.

The Great Poet Kalidas Said: "Madhumaya Phaniteenaam Marghadarsi Maharshih" — the paths shown by Maharshi Valmiki are blended with honey. It is truer in respect of Vasishta Ramayana than the original Ramayana.

It might not be very difficult even for an ordinary poet to have his creation invested with a sense of fulfillment when he selected such a person as Sri Rama as the hero of his subject and the annihilation of Ravana as the central theme. But, with sheer philosophy as the crux of the subject and packing it with subtle and scientific arguments, stretching it to 32000 verses, and maintaining its poeticality has been possible only to Sage Poet Valmiki. So far none has been there to compete with him and fulfill such a task. Perhaps none might be there in future too.

Having got the perception with the blessings of my revered master, I began eagerly to search for the ‘heart’ of the great poet. In this respect, Paramahamsa Sri Samadaananda Bodhendra Saraswathi came to my rescue again and again. His commentary, “Taatparya Prakaasa” enabled me to have the fruits and the essence of ‘Yogavaasihta’. It is with this strength that I could gain access to the heart of Yogavaasishta. 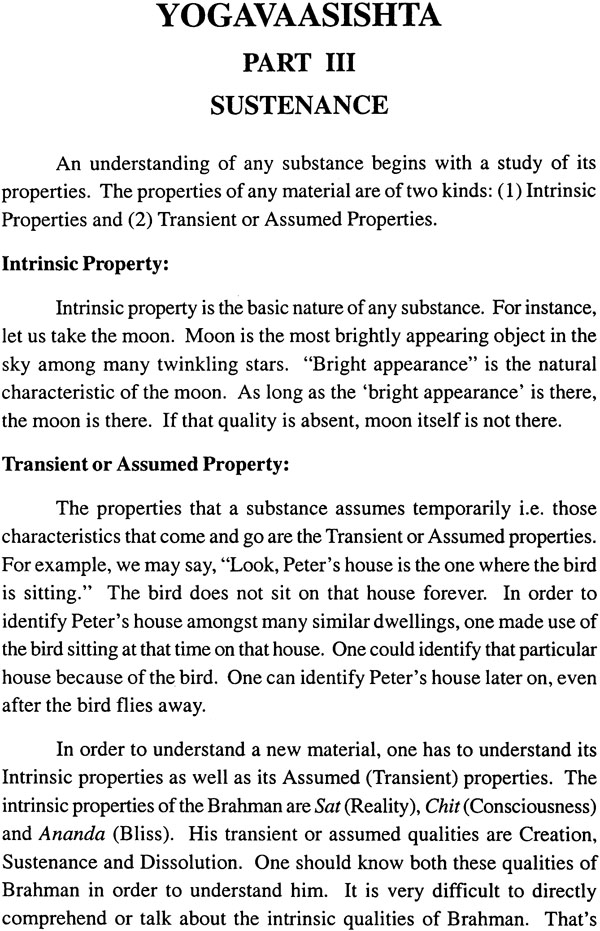 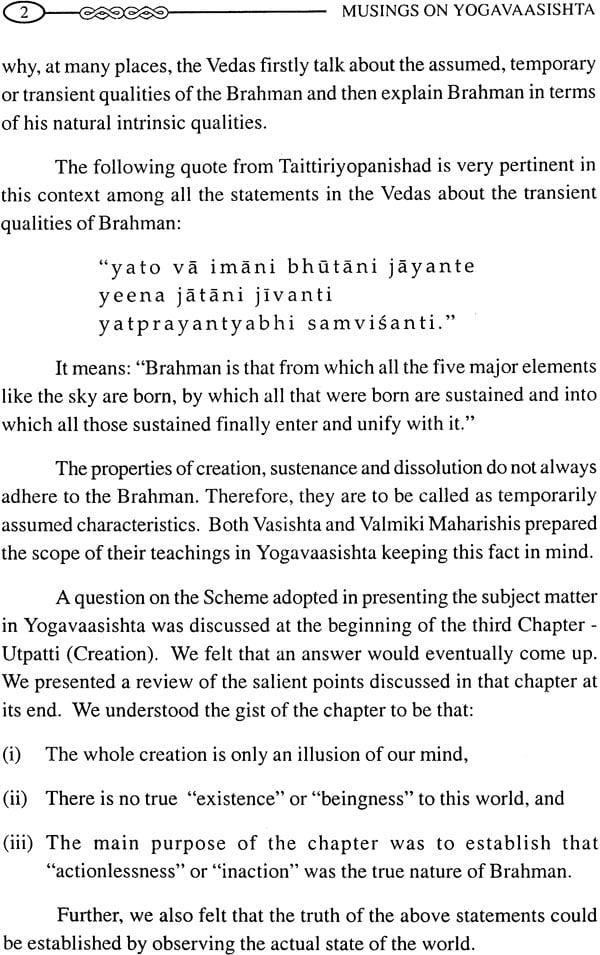 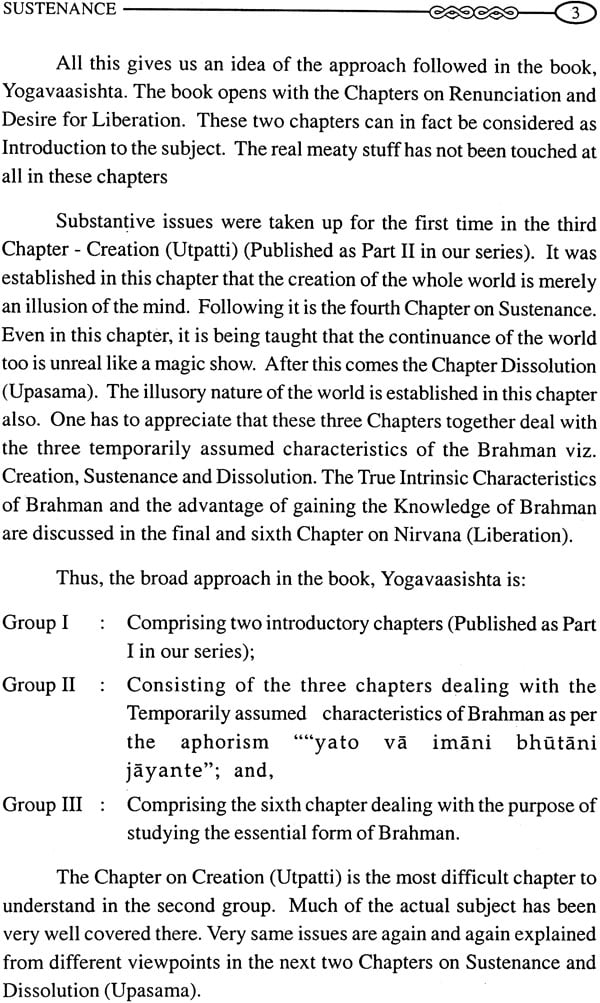 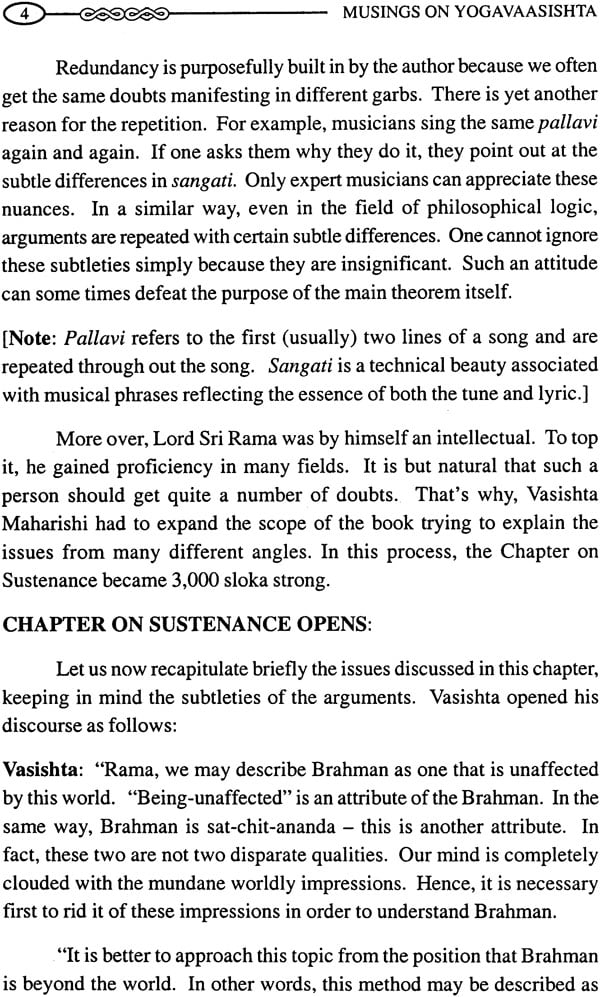 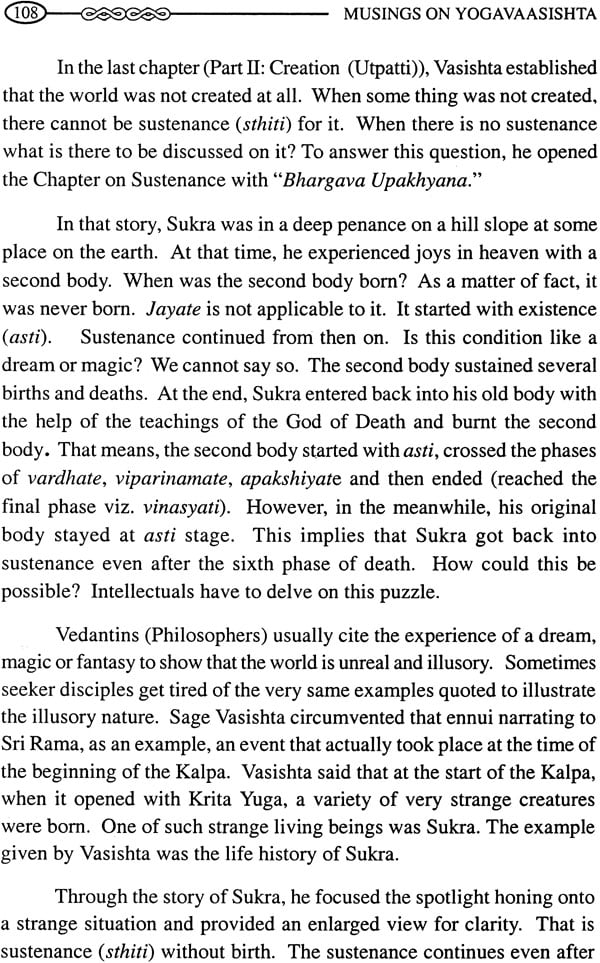 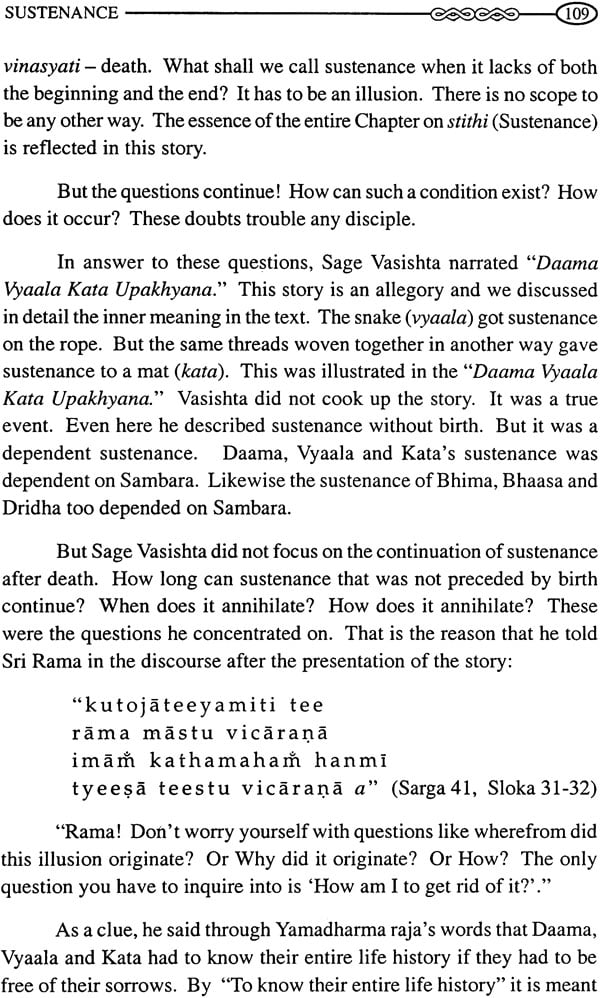 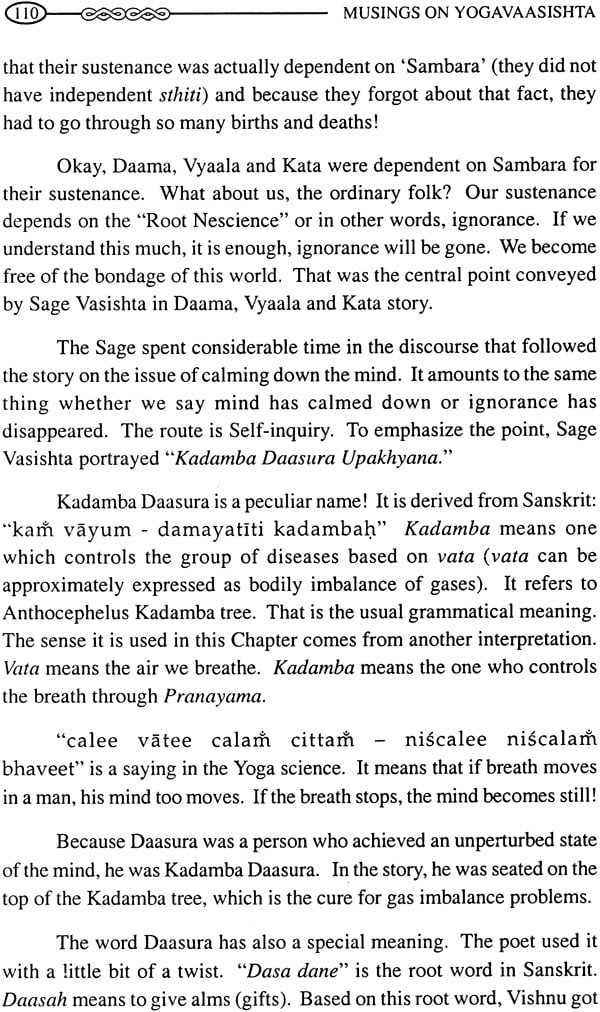 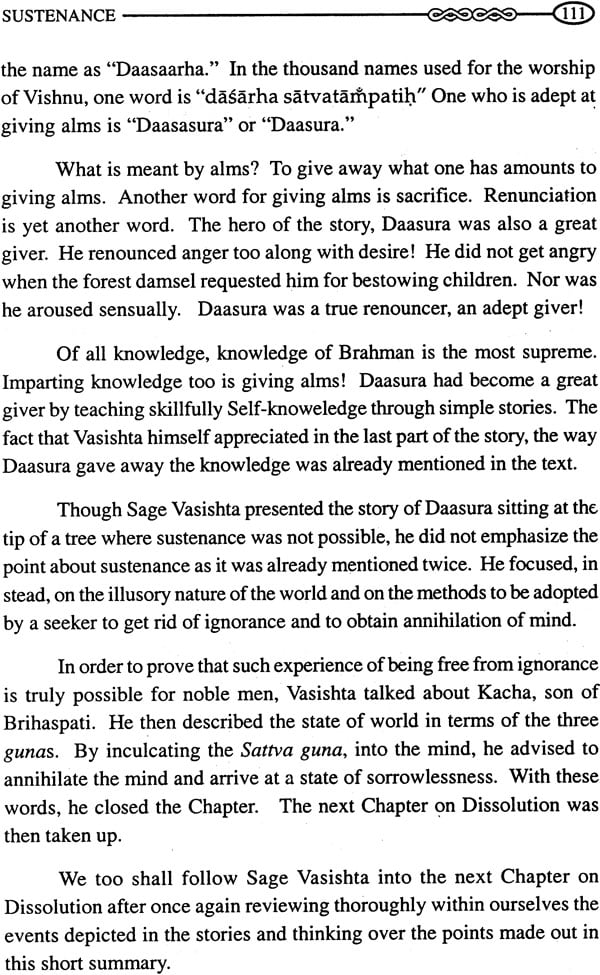