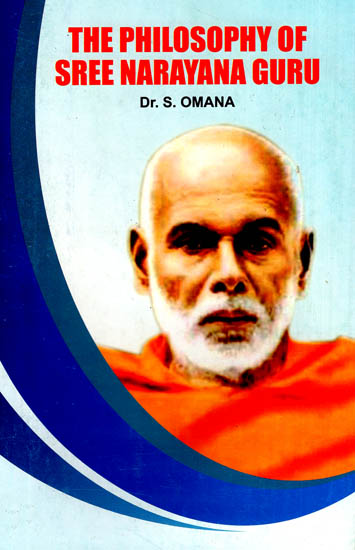 In a brilliant and far-ranging study, Dr. S. Omana trace the evolution of Narayana Guru’s Philosophy in a scholarly and academic manner through the application of scientific methodological tools, and as a result the present book in its entirety is clearly a work of original insight. Beginning with the examination of the Guru’s life and teachings the work takes us through a fascinating series of philosophical visions and experiments which come from the laboratory of a scientist, the Guru. Special attention has been given to the concept of One World and so the work is a valuable contribution to the unity of mankind. The author has made a well balanced assessment to make its quality quite acceptable to everyone.

In A Study of History, Toynbee examines the historical causes which now and then shake part of the mankind. After careful scrutiny he concludes his study with what has now become famous as the theory of Challenge and Response. In the history of India we see such an encounter in the life and teachings of Narayana Guru. He confronted the course of history and has shaken the conscience of the very people who have been exercising the worst kind of social iniquity in the name of an assumed caste-prejudice. His bold encounter with orthodoxy did the miracle of rousing self-esteem in millions of down-trodden people. And it was the Guru who wrested out of the clutches of age-old customs, a new civilization which is even today fighting for eaquality of opportunity and social justice in its own right.

The writer was born in Aruvippurathu-house in Nedumangad taluk in Trivandrum, sanctified by the presence of the Great Guru, Sree Narayana, during his lifetime. While Guru was observing penance on a rock in the river, He was used to visit our house, where member of the house became devotees to the Guru. Gradually, the writer was deeply influenced by is principles and the holy life. It was his influence that prompted her to take the topic, The Philosophy of Sree Narayana Guru, as her cherished theme for her search after truth. All along, she became disciple of Nataraja Guru, Guru Nitya Chaitanya Yati and also the Present Guru Muni Narayana Prasad.

As Head of The Department of Philosophy, University College, Thiruvananthapuram, she was able to produce 10 Ph. D. Theses and 30 M. Phil Dissertations. Her-Post-Doctoral work, Epistemological Perspective in the Philosophy of Narayana Guru, honoured by a fellow ship of the Indian Council of Philosophical Research, New Delhi.

The Philosophy of Sree Narayana Guru was originally written as a doctoral thesis, upon the merits of which Dr. S. Omana was honoured by the University of Kerala with the title Ph.D. To my knowledge, this was the first doctoral research paper on Narayana Guru and his philosophy ever done in the Indian universities. A number of research studies on the Guru's vision have since been made, and more studies are now underway. Such efforts will probably continue indefinitely because the vision of a seer the status of Narayana Guru cannot be contained in the perspective of any given study. Though it may contain these possibilities, it transcends all such researches. Indeed, the applications of the Guru’s vision, personally or socially understood, as well as subjectively and objectively understood, are truly boundless.

After this book was presented as a doctoral thesis, it was then published for the general public. This publication is the revised edition. In this study Dr. S. Omana delves into biographical details of Narayana Guru, as well as offering in-depth reflections upon the philosophical vision that was given succinctly and systematically by the Guru in his works. The book not only enters into the principles of high Vedantic philosophy but relates these to the firm basis upon which all social and ethical matters must stand.

Dr. Omana’s interest in Narayana Guru and his philosophy has not been confined to the bounds of her original Ph.D. thesis. Throughout her life, she has been dedicated to the cause of making the Guru’s vision known. As part of this joyful effort, she has taught the Guru’s philosophy at the university level and beyond it. She completed a post- doctoral research with a paper entitled Epistemological Perspective in the Philosophy of Narayana Guru, for which she was awarded a fellowship by the Indian Council of Philosophical Research. Further, she has contributed the section Advaita Vedanta in the Encyclopaedic Volumes entitled History of Science, Philosophy and Culture in Indian Civilization, published by The Centre for Civilizations, New Delhi. And she has contributed several papers covering various aspects of the Guru’s philosophy at different national and international seminars. Her most recent book, entitled Oru Mahaguru, is an exhaustive biography and philosophy of the Guru Narayana written in the Malayalam language. The State Language Institute of Kerala also recently published two books written by Dr. Omana. 1. Sree Narayana Guru, 2. Sree Narayana Guru Jeevithavum Darsanavum.

Since retiring as Professor of Philosophy at the University College, Trivandrum, she now leads a retired life, but still spends much time selflessly teaching and writing upon the philosophy of Narayana Guru.

The present book has been acclaimed by both academics and laypersons, and has served as an important springboard for the further researches of others. I have no doubt that this book shares in the everlasting value of Narayana Guru’s vision. The need to publish another edition of this book marks its significant value. May this book on the Guru’s philosophy be a light that enriches the lives of its readers.

Sree Narayana Guru was one of the epoch-making seers of the present century, who has dynamically effected a radical change in the social, moral and spiritual value-visions and behavioural patterns of his contemporaries in India.

In Toynbee’s A Study of History he examines the historical causes which now and then shake part of mankind in different parts of the world, out of the integration of hide-bound custom, into the differentiation of civilization. After careful scrutiny he concludes his study with what has now become famous as The Theory of Challenge and Response. Toynbee says: "... the encounter is conceived as a rare and sometimes as a unique event; and it has consequences which are vast in proportion to the vastness of the breach it makes in the customary course of Nature." In the history of India, and particularly of South India, we see such an encounter in the life and teachings of Sree Narayana Guru. He confronted the course of history and has shaken the conscience of the very people who have been exercising the worst kind of social inequality in the name of an assumed caste- superiority. His bold encounter with orthodoxy did the miracle of rousing self-esteem in millions of down-trodden people. Thanks to his philosophy and tireless efforts they discovered their social identity and have resolved to overcome their social condemnation. It was Narayana Guru who wrested out of the iron claws of age-old custom, the differentiation of a new civilization which is today fighting relentlessly for everybody’s equal opportunity to grow and prosper.

This thesis is written in four parts. The first part is Sree Narayana Guru’s biography. The second part deals with his mystical writings.

The third part is an exposition of the Guru’s metaphysical theories and their aesthetic and ethical corollaries. The fourth part is the conclusion.

In the biographical narration I have used the historical method with special emphasis on the objectivity of data. Objective method is of little use in interpreting mystical visions and symbols. For that purpose I used the method of traditional psychology as propounded by Dr. G. H. Mees. For discerning the transformation of symbols I relied on C. G. Jung's analytical method. In his metaphysical writings the Guru very often uses the method of anvaya-vyatireka which is essentially dialectical. Wherever it seemed to me relevant I have also used the phenomenological method of reduction.

There are a number of biographies of Sree Narayana Guru available in Malayalam. Most of them are random compilations of anecdotes and they do not throw much light on the Guru’s philosophy. The Word of the Guru, written by the Guru’s own disciple, Nataraja Guru, in English, is a praiseworthy book which highlights the mystical and spiritual unfoldment of his personality. In this book we get a general estimation of the Guru’s philosophy. However, he does not give a chronological narration of the Guru's biography. So I felt the need to give a brief presentation of Sree Narayana Guru’s life so that his philosophy can be placed in its correct historical setting.

To apply historical method with an objective basis I have formulated the following issues:

1. What was the most challenging evil force of social injustice with which the common masses were struggling when Narayana Guru appeared on the historic scene of Kerela?

2. What was the factual encounter that Sree Narayana Guru offered to the time-old tradition of caste-system and its pernicious practice of untouchability?

3. What philosophy did the Guru evolve and what course of action did he adopt to make an epoch-making counterblast to storm the citadel of caste-orthodoxy?

4. Was his philosophy only an incidental catalyst in speeding up historical transformation of a people, or was it substantial to seep into the mainstream of India’s philosophical envisioning to direct her future also? 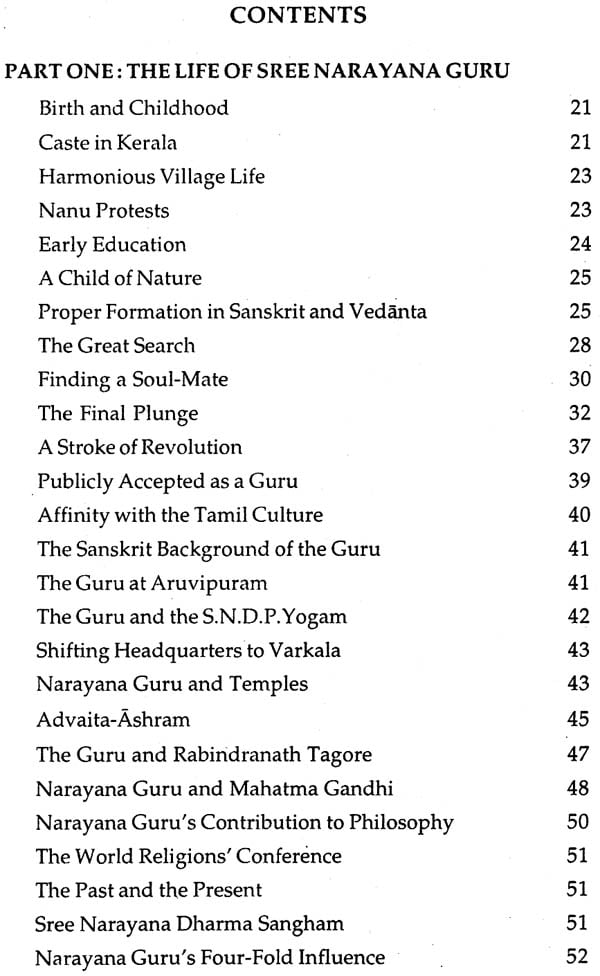 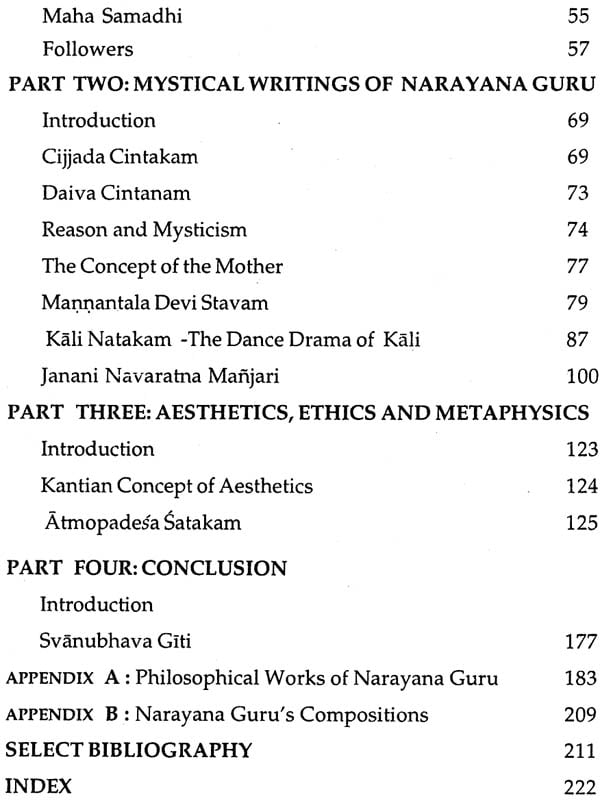 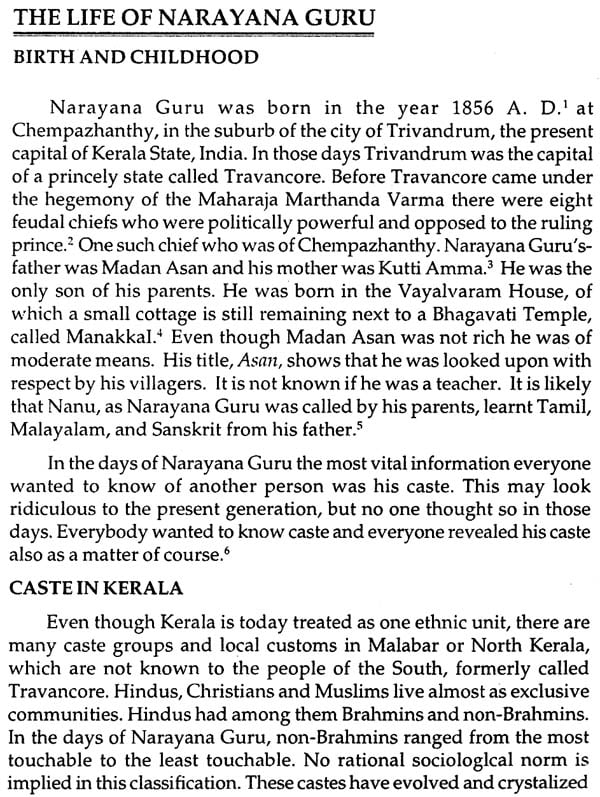 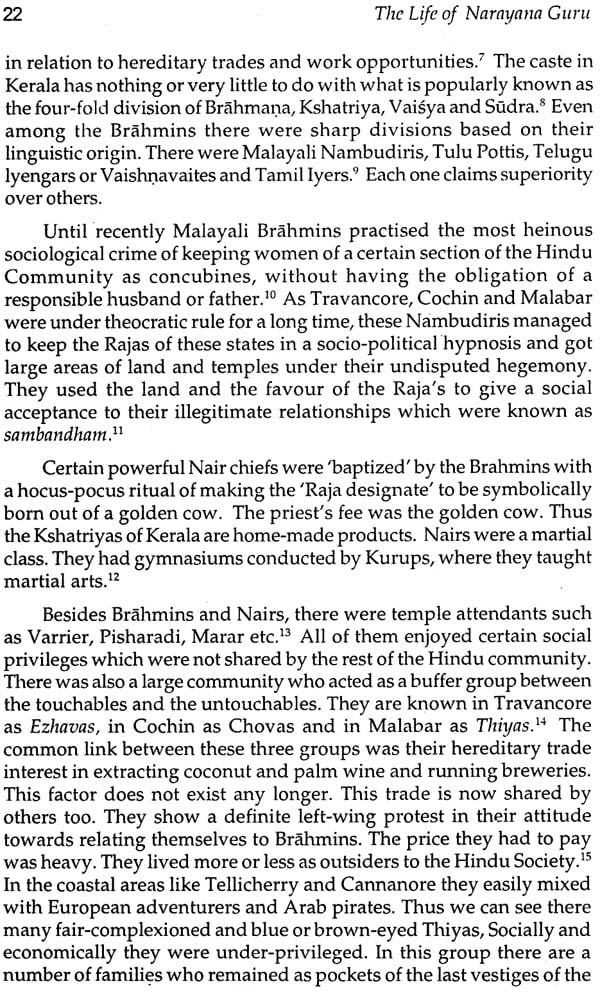 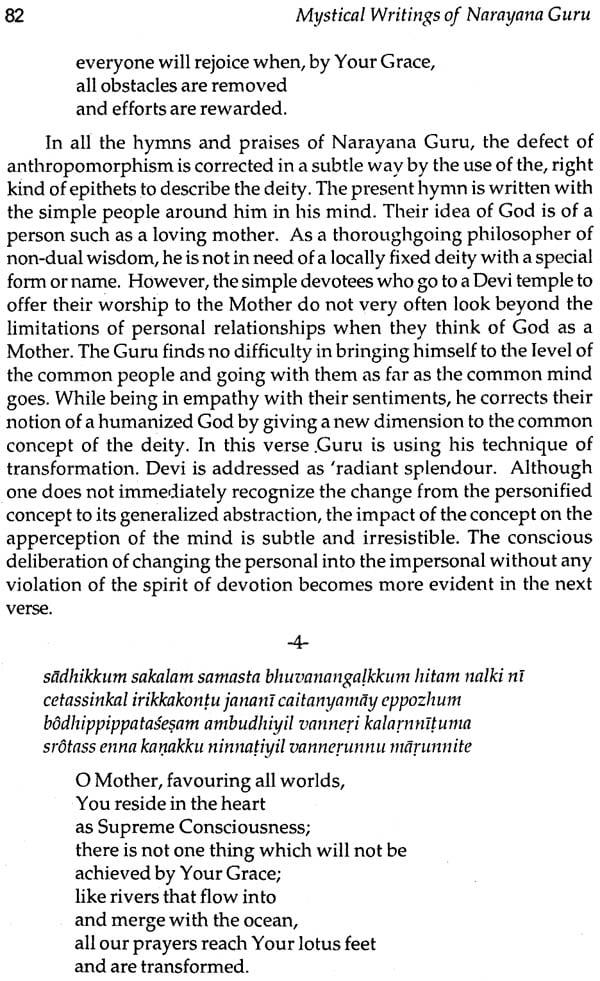 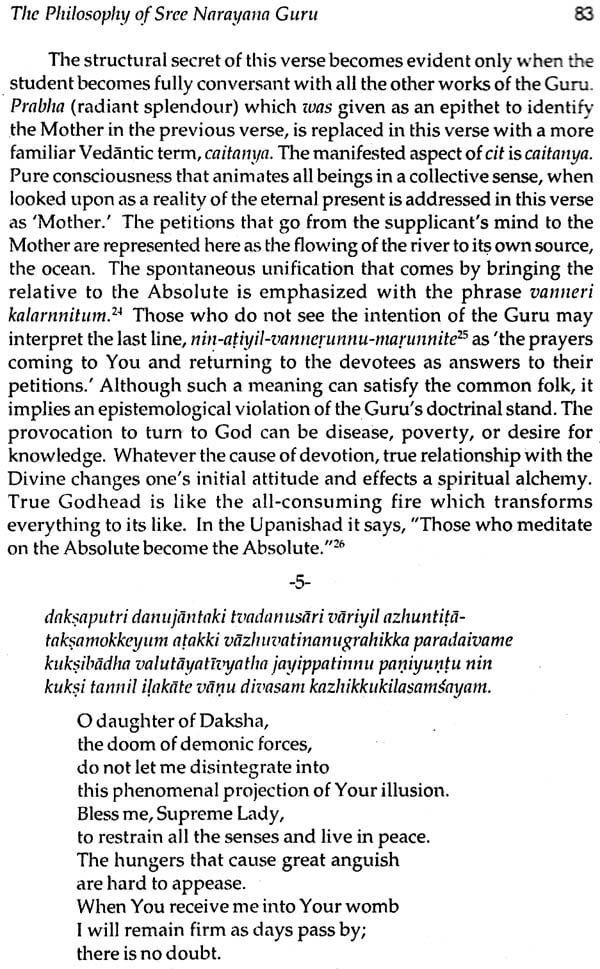 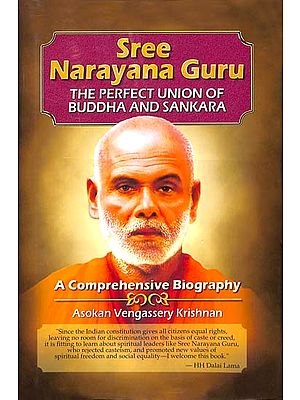 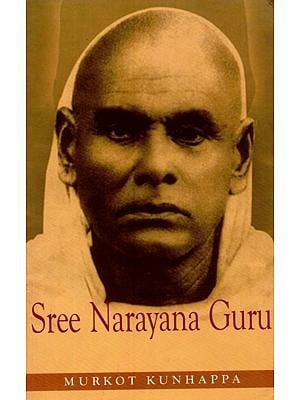 The Word Of The Guru : The Life And Teachings of Guru Narayana
By Nataraja Guru
$52
FREE Delivery 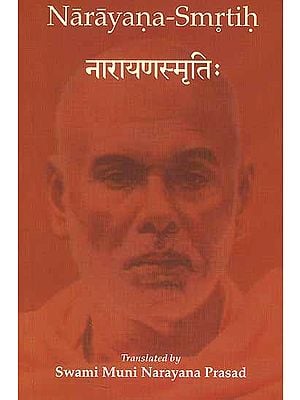