Prabhupada (Messenger of The Supreme Lord)

Satsvarupa dasa Goswami was born on December 6, 1939. In July 1966, he met His Divine Grace A. C. Bhaktivedanta Swami Prabhupada, and he became his initiated disciple in September of that year. Satsvarupa dasa Goswami began contributing articles to Back to Godhead, the magazine of the Hare Krsna movement, and later became its editor in chief. In August 1967 he went to Boston to establish the first ISKCON center there. Satsvarupa dasa Goswami was one of the original members selected by Srila Prabhupada to form the Governing Body Commission of ISKCON in 1970. He remained as president of Boston ISKCON until 1971, when he moved to Dallas and became headmaster of Gurukula, the first ISKCON School for children.

In May 1972, on the appearance day of Lord Nrsirnhadeva, he was awarded the sannyasa (renounced) order by His Divine Grace Srila Prabhupada and began traveling across the United States, lecturing in colleges and universities. In January 1974 he was called by Srila Prabhupada to become his personal secretary and to travel with him through India and Europe. In 1976 he published Readings in Vedic Literature, a concise account of the Vedic tradition. The volume is now being studied at various universities. In 1977 Srila Prabhupada ordered him to accept the duties of initiating guru, along with ten other senior disciples. In addition to his duties as a Governing Body Commissioner and an initiating guru, he has written many books, including the multi volume Srila Prabhupada-lildmrta and this book, Prabhupada.

The worldwide fame of His Divine Grace A. C. Bhakti-vedanta Swami, later known as Srila Prabhupada, was to come after I 965-after he arrived in America. Before leaving India he had written three books; in the next twelve years he was to write more than sixty. Before he left India he had-initiated one disciple; in the next twelve years he would initiate more than four thousand. Before he left India, hardly anyone had believed that he could fulfill his vision of a worldwide society of Krsna devotees; but in the next decade he would form and maintain the International Society for Krishna Consciousness and open more than a hundred centers. Before sailing for America, he had never been outside India; but in the next twelve years he would travel many times around the world propagating the Krsna consciousness movement.

Although his life’s contribution may appear to have come in a late burst of revolutionary spiritual achievements, the first sixty-nine years of his life were a preparation for those achievements. And although to Americans Prabhupada and his teachings were an unknown sudden appearance-”He looked like the genie that popped out of Aladdin’s lamp”-he was the stalwart representative of a centuries-old cultural tradition.

Srila Prabhupada was born Abhay Charan De on September I, 1896, in Calcutta, India. His father was Gour Mohan De, a cloth merchant, and his mother was Rajani. His parents, in accordance with Bengali tradition, employed an astrologer to calculate the child’s horoscope, and they were made jubilant by the auspicious reading. The astrologer made a specific prediction: when this child reached the age of seventy, he would cross the ocean, become a great exponent of religion, and open 108 temples.

Abhay’s home at 151 Harrison Road was in the Indian section of north Calcutta. Abhay’s father, Gour Mohan De, belonged to the aristocratic suvarna-vanik merchant community. He was related to the wealthy Mullik family, which for hundreds of years had traded in gold and salt with the British. Originally the Mulliks had been members of the De family, a gotra (lineage) that traces back to the ancient sage Gautama; but during the Mogul period of pre-British India, a Muslim ruler had conferred the title Mullik (“lord”) on a wealthy, influential branch of the Des. Then, several generations later, a daughter of the Des had married into the Mullik family, and the two families had remained close ever since.

An entire block of properties on either side of Harrison Road belonged to Lokanath Mullik, and Gour Mohan and his family lived in a few rooms of a three-story building within the Mullik properties. Across the street from the Des’ residence was a Radha-Govinda temple where for the past 150 years the Mulliks had maintained worship of the Deity of Radha and Krsna. Various shops on the Mullik properties provided income for the Deity and for the priests conducting the worship. Every morning before breakfast, the Mullik family members would visit the temple to see the Deity of Radha-Govinda. They would offer cooked rice, kacauris, and vegetables on a large platter and would then distribute the prasadam to the Deities’ morning visitors from the neighborhood. Among the daily visitors was Abhay Charan, accompanying his mother, father, or servant.

Gour Mohan was a pure Vaisnava, and he raised his son to be Krsna conscious. Since his own parents had also beenVaisnavas, Gour Mohan had never touched meat, fish, eggs, tea, or coffee. His complexion was fair and. his disposition reserved. At night, before locking his cloth shop, he would set a bowl of rice in the middle of the floor to satisfy the rats, so they wouldn’t gnaw the cloth in their hunger. On returning home he would read from Caitanya-caritamrta and Srimad-Bhagavatam (the main scriptures of Bengali Vaisnavas), chant on his japa beads, and worship the Deity of Lord Krsna. He was gentle and affectionate and would never punish Abhay. Even when obliged to correct him, he would first apologize: “You are my son; so now I must correct you. It is my duty. Even Caitanya Mahaprabhu’s father would chastise Him. So don’t mind.”

A picture always remained in Prabhupada’s memory of his father’s devotional worship of Lord Krsna. He would recall how his father used to come home late at night from the cloth shop and faithfully perform his worship of Lord Krsna before the home altar. “We would be sleeping,” Prabhupada re- called, “and father would be doing arati. We would hear the ding, ding, ding-we would hear the bell and wake up and see him bowing down before Krsna.”

Gour Mohan wanted Vaisnava goals for his son; he wanted Abhay to become a servant of Radha and Krsna, to become a preacher of the Bhagavatam, and to learn the devotional art of playing the mrdanga drum. He regularly received sadhus in his home, and he would always ask them, “Please bless my son so that Srimati Radharal)i will grant him Her blessings.” When Abhay’s mother said she wanted her son to become a British lawyer when he grew up (which meant he would have to go to London to study), one of the boy’s uncles thought it was a good idea. But Gour Mohan would not hear of it; if Abhay went to England he might be influenced by European dress and manner. “He will learn drinking and woman- hunting,” Gour Mohan objected. “I do not want his money.”

From the beginning of Abhay’s life, Gour Mohan introduced his plan. He hired a professional mrdanga player to teach Abhay the standard rhythms for accompanying kirtana. Rajani was skeptical: “What is the purpose of teaching such a young child to play the mrdangal It is not important.” But Gour Mohan had his dream of a son who would grow up singing bhajanas, playing mrdanga, and speaking on Srimad-Bhagavatam. 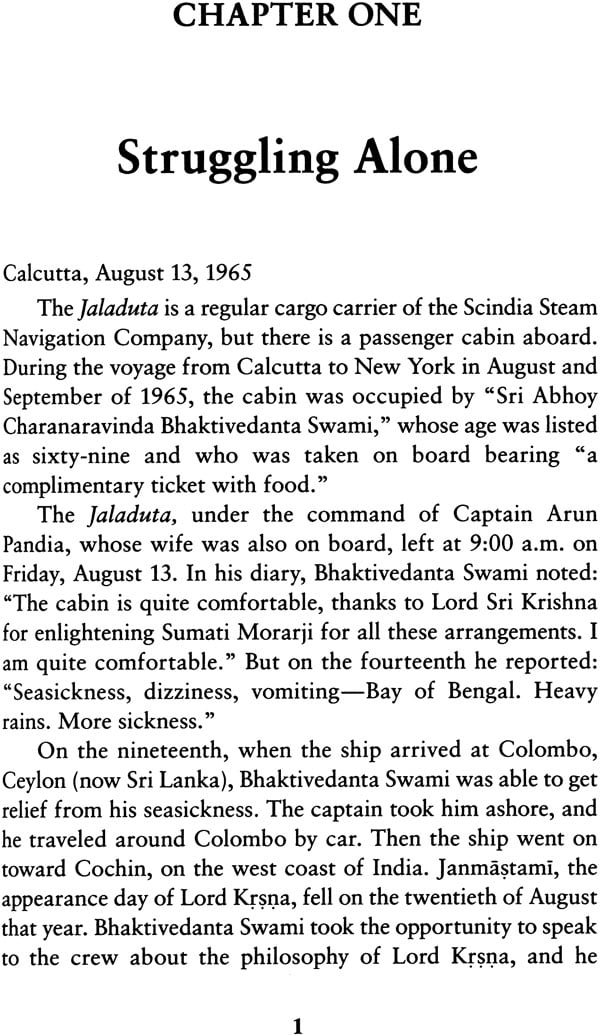 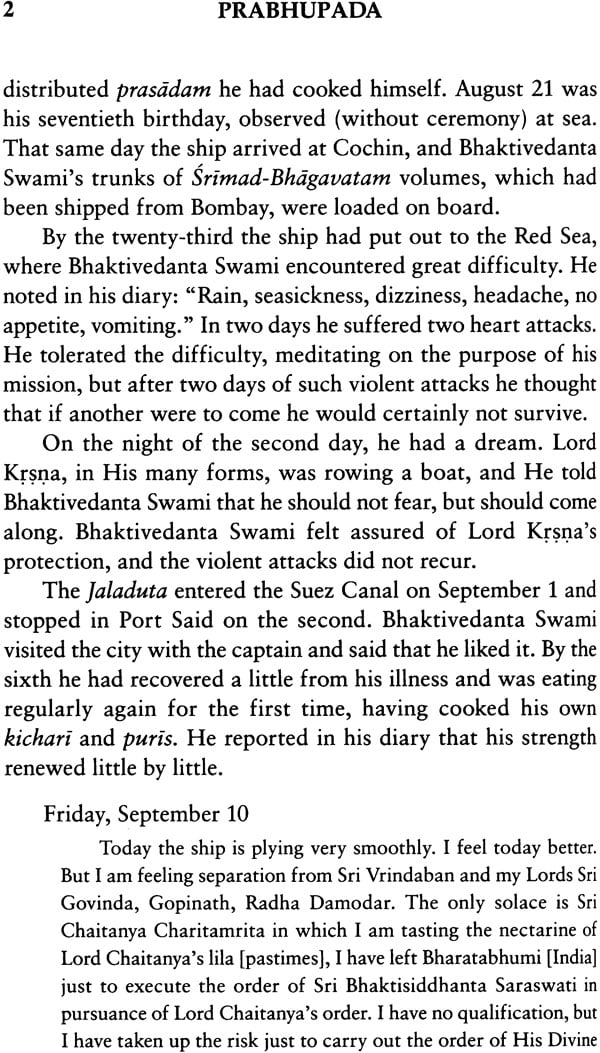 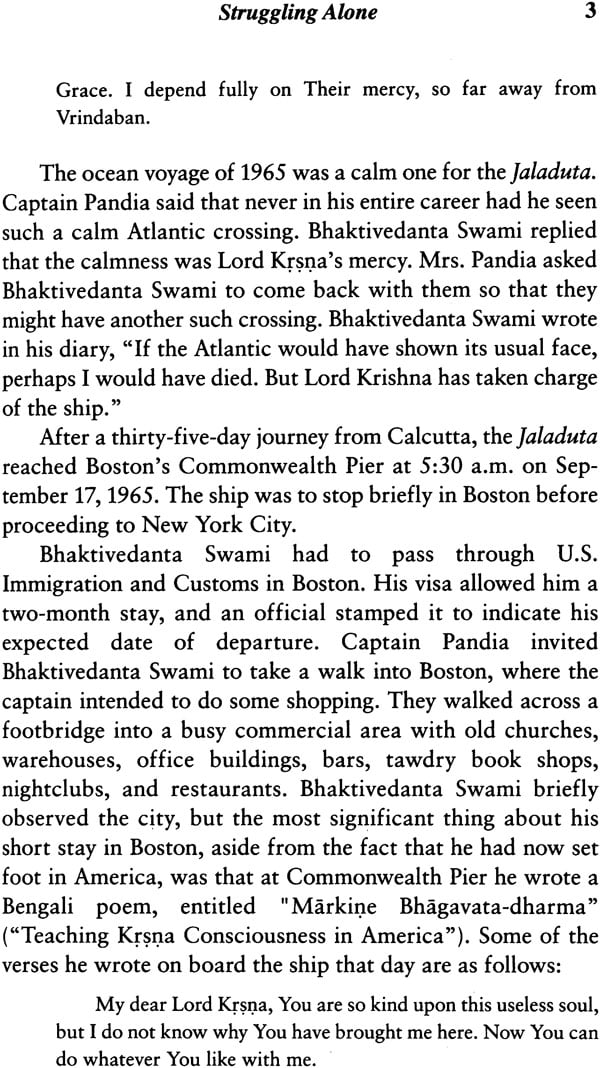 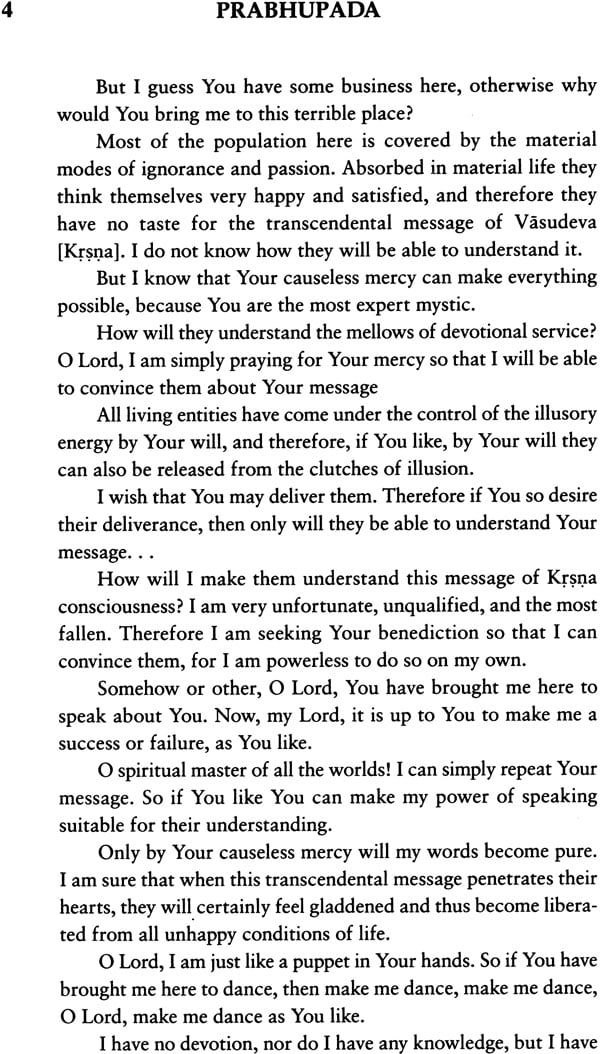 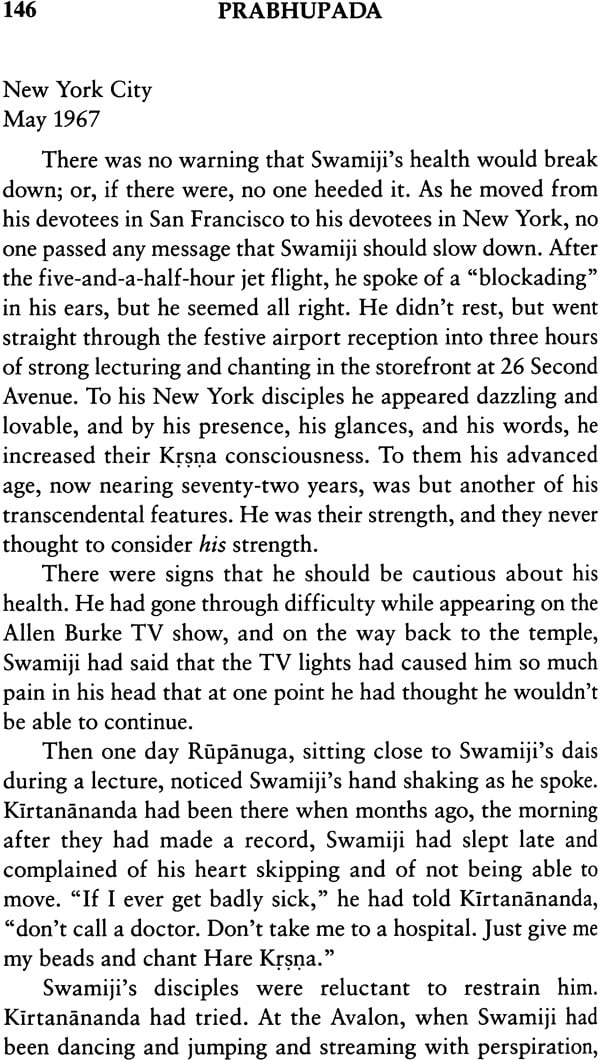 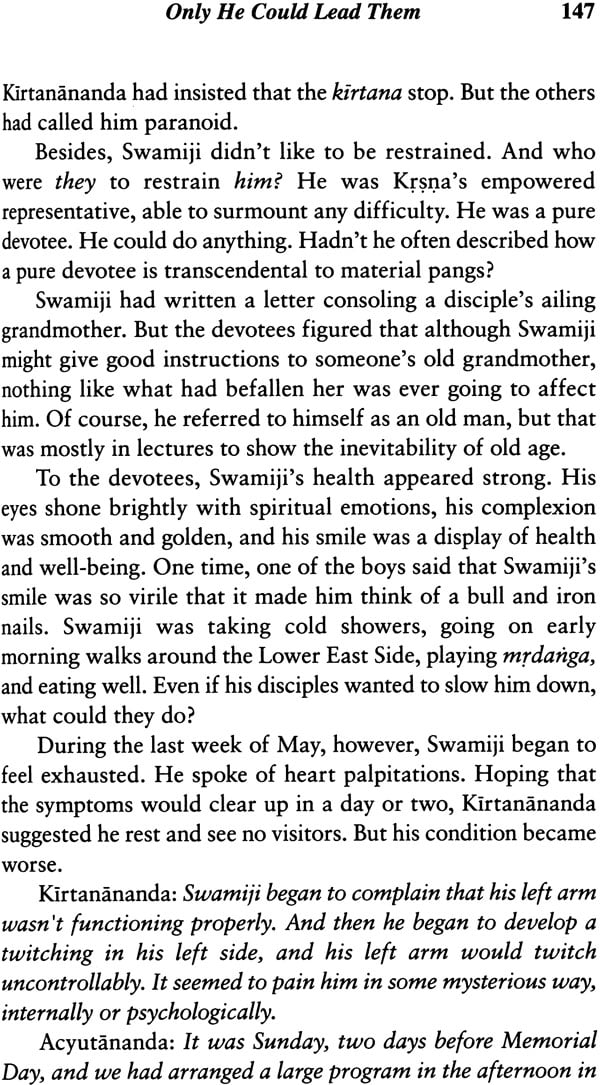 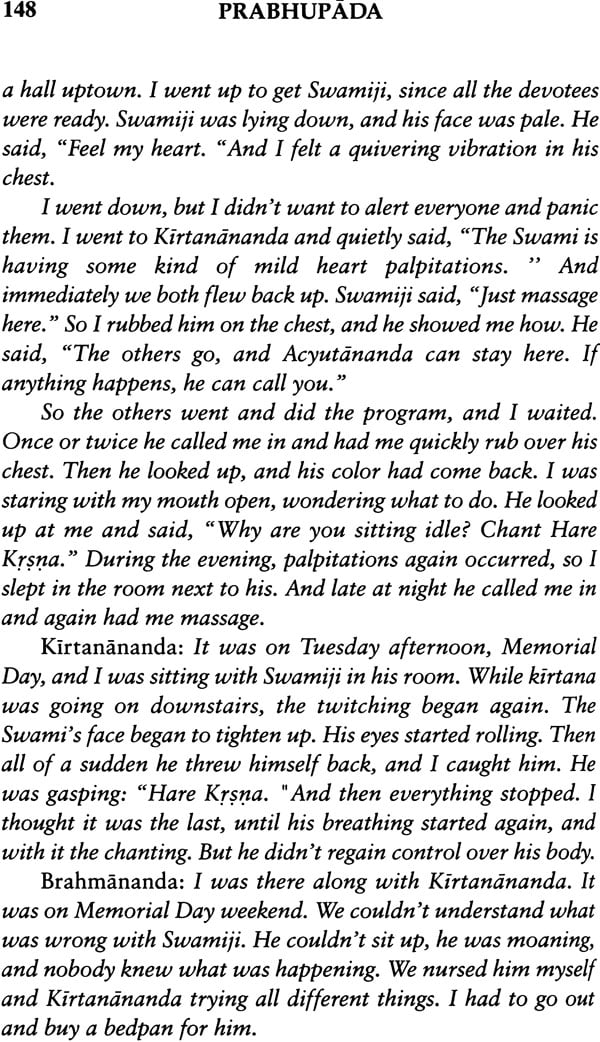 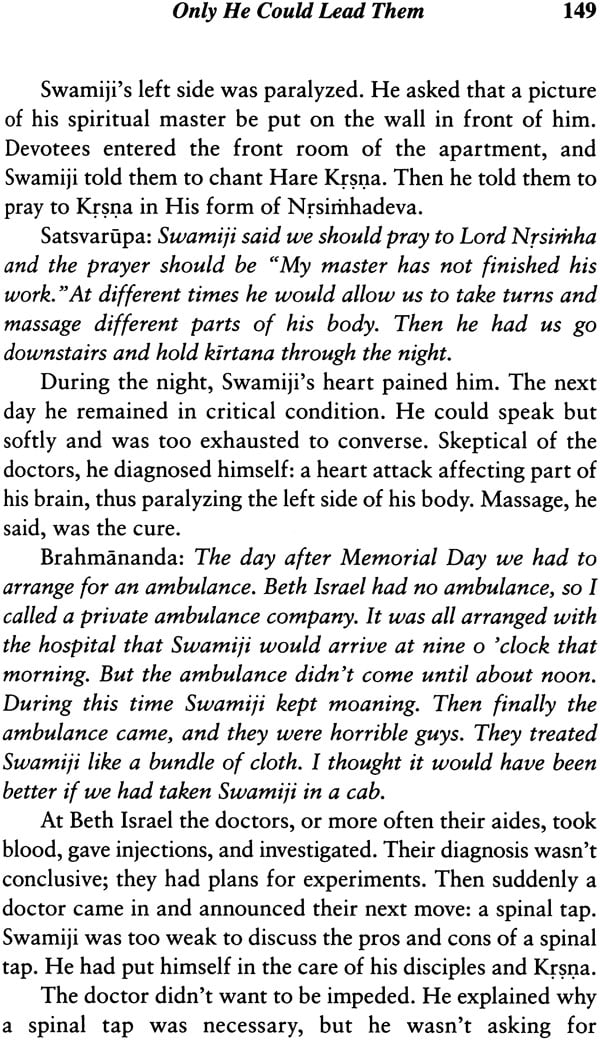 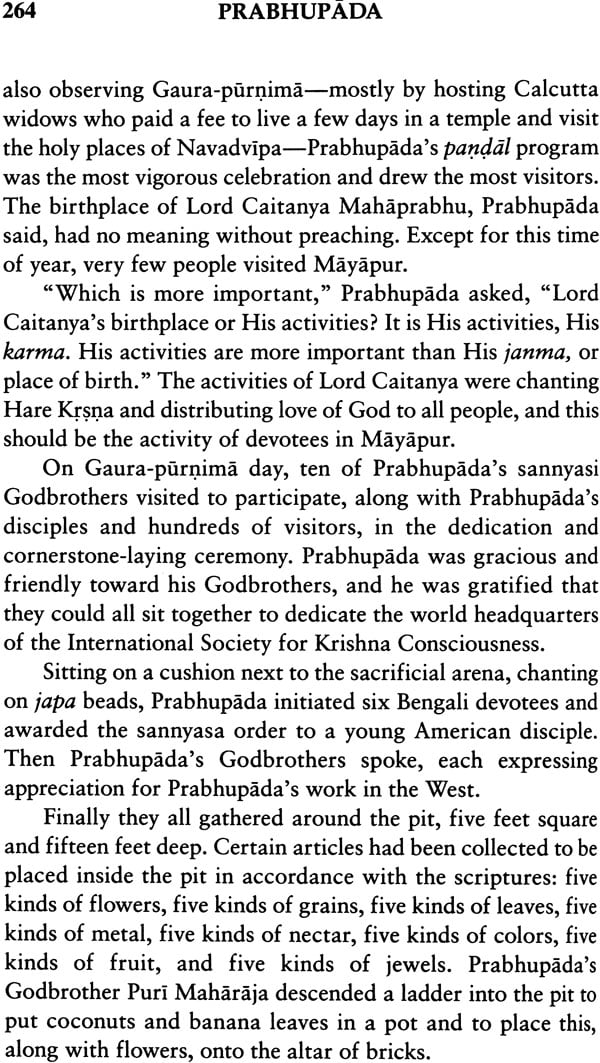 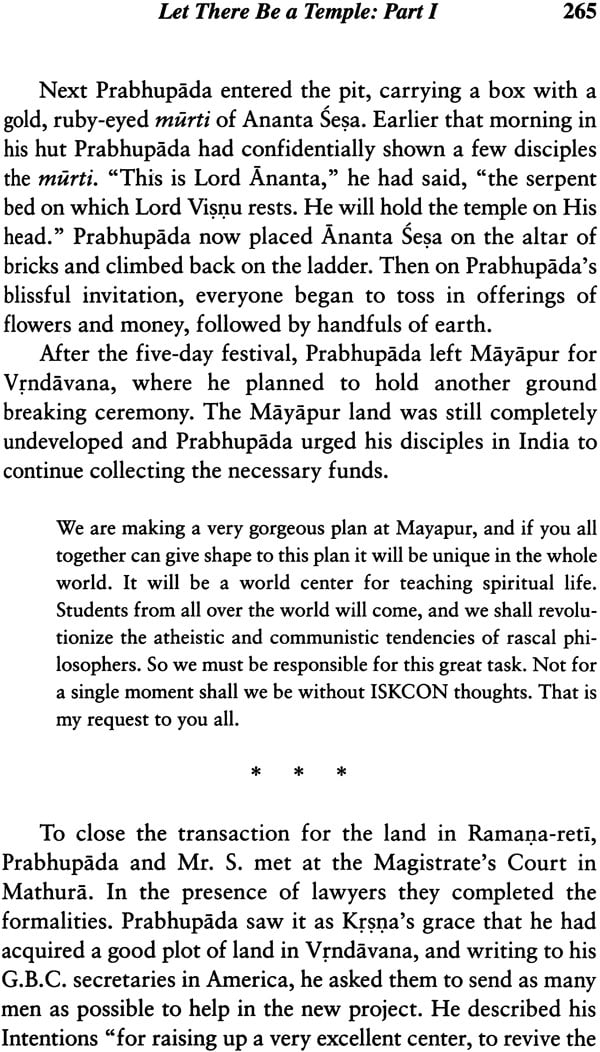 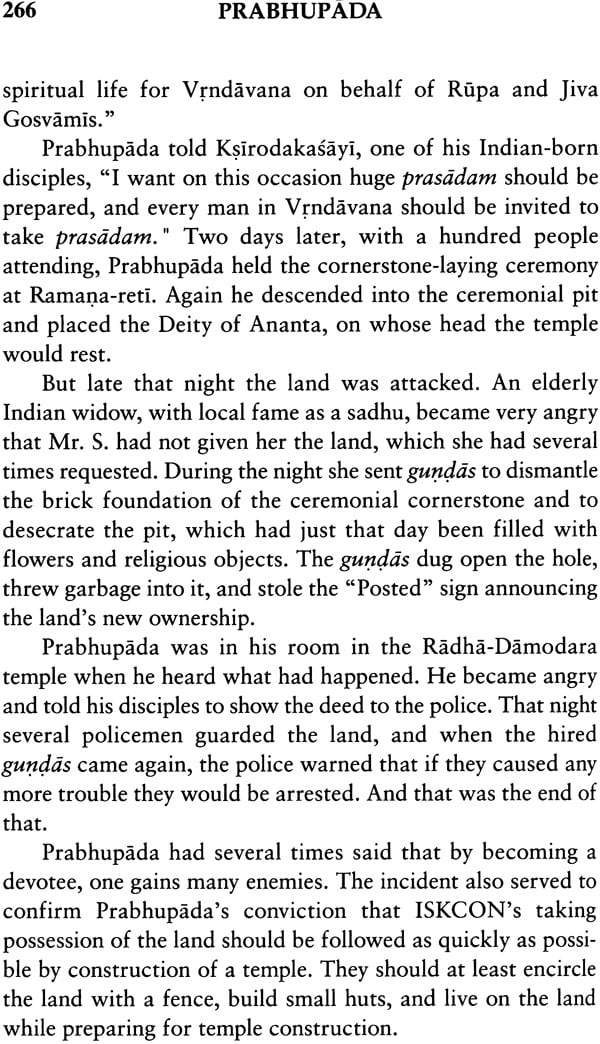 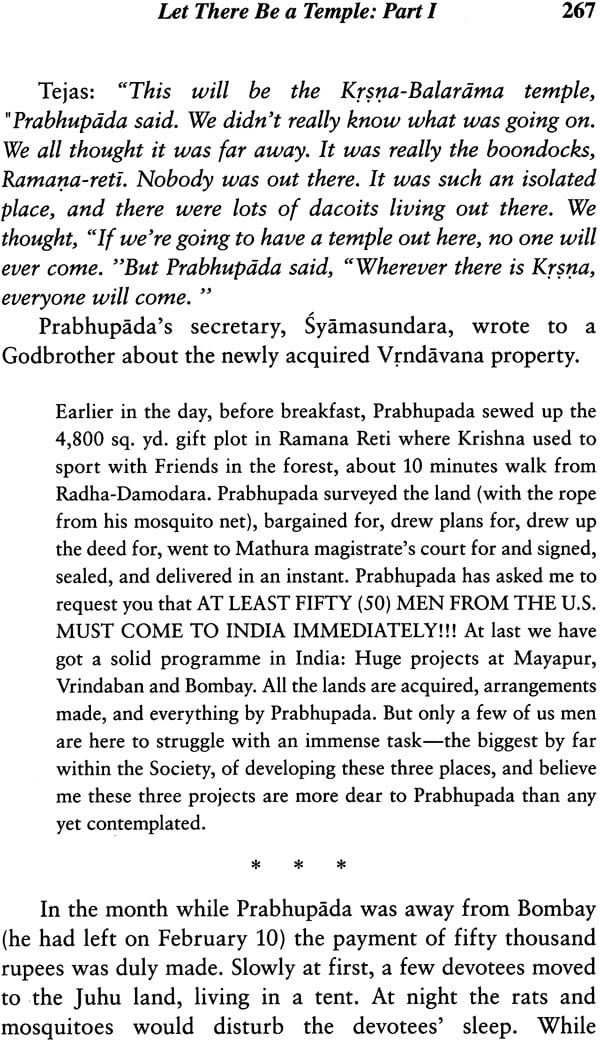 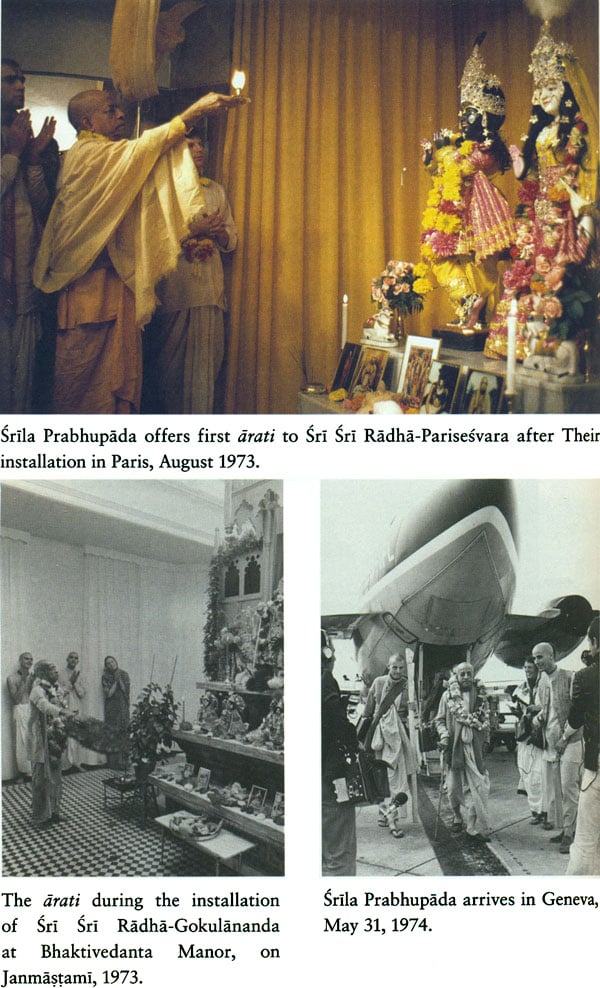 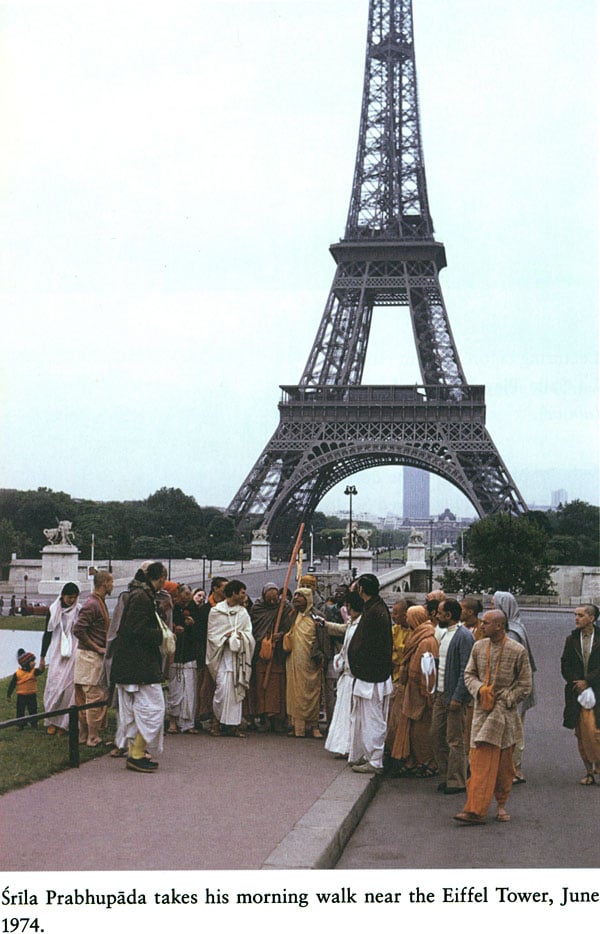 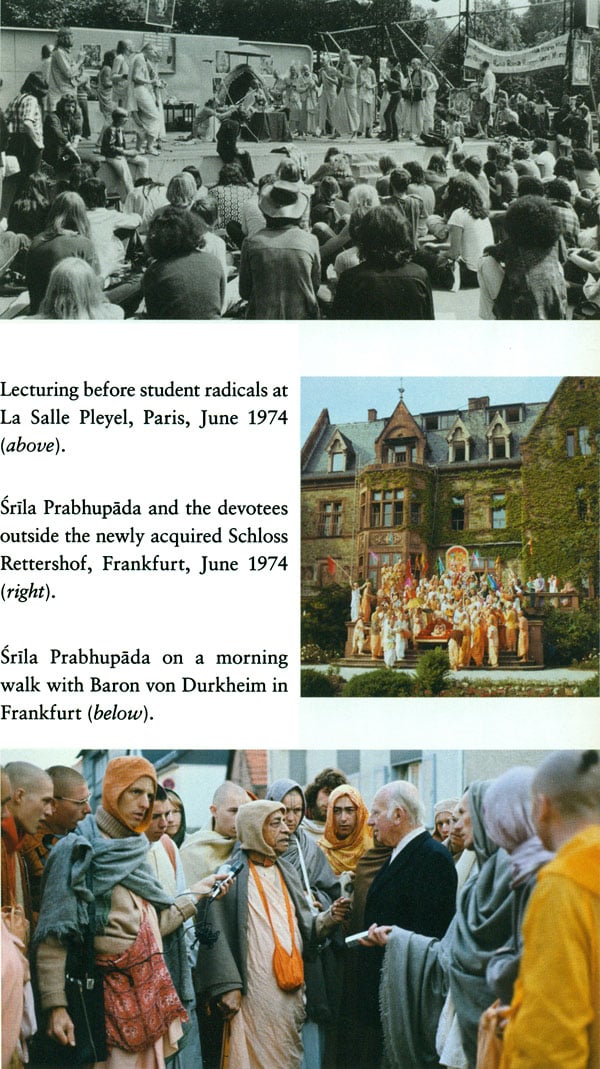 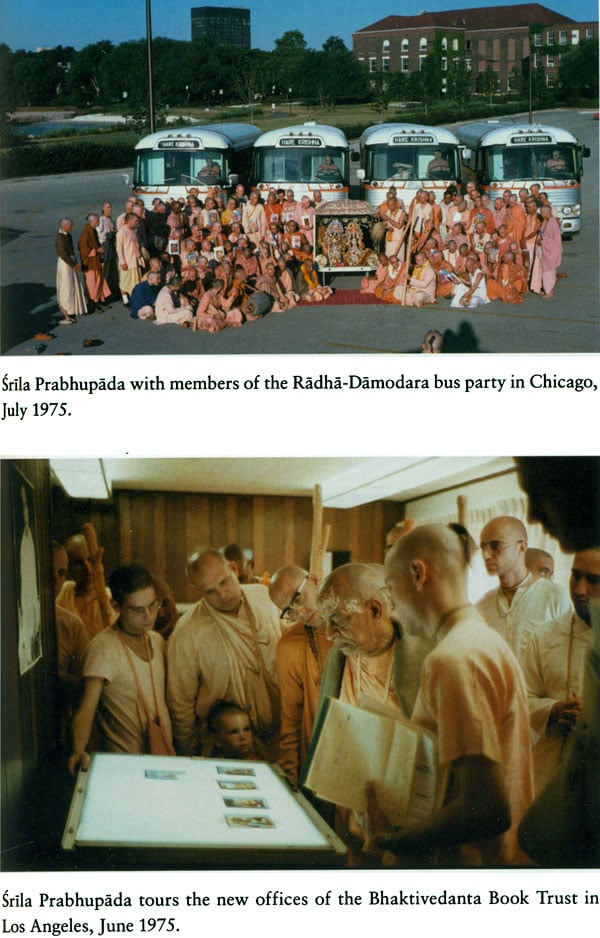 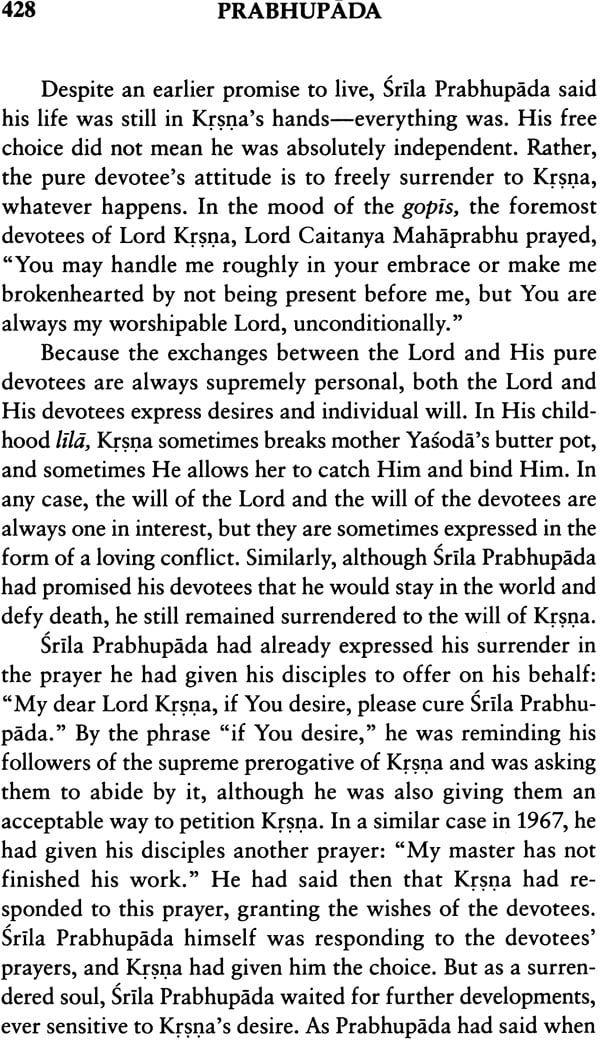 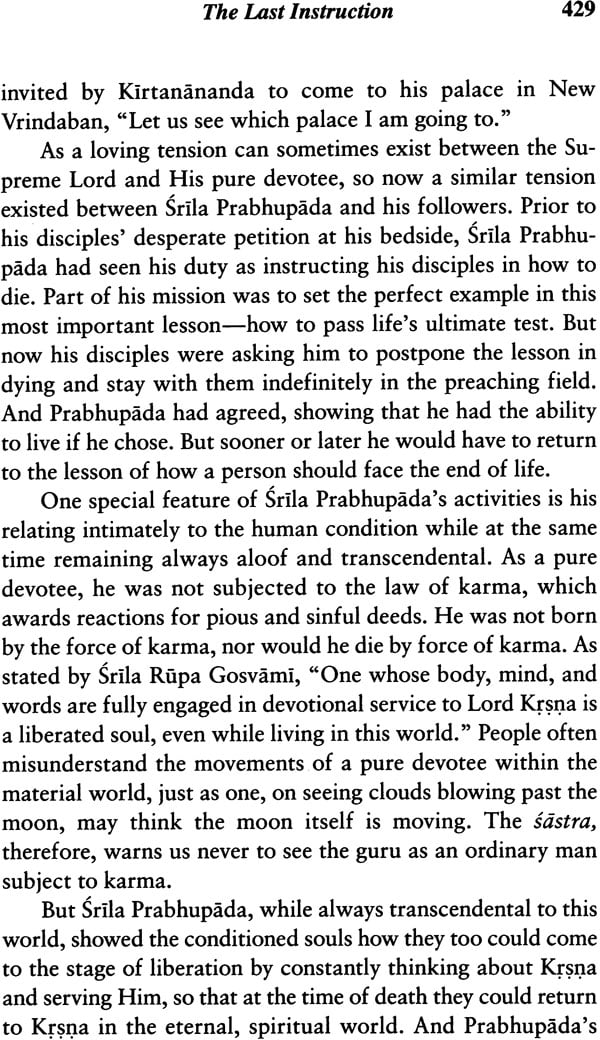 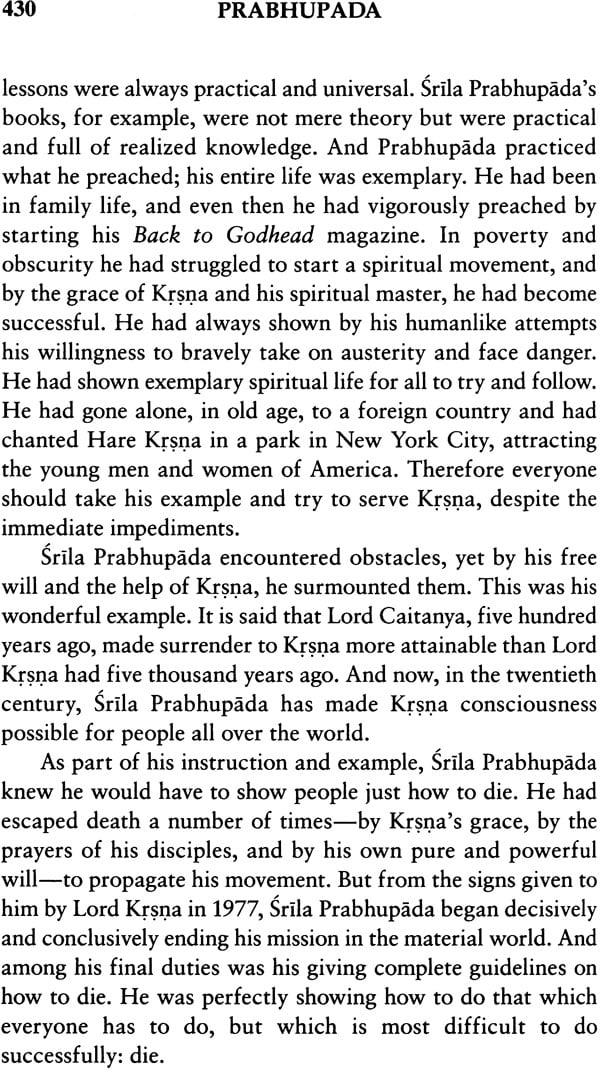 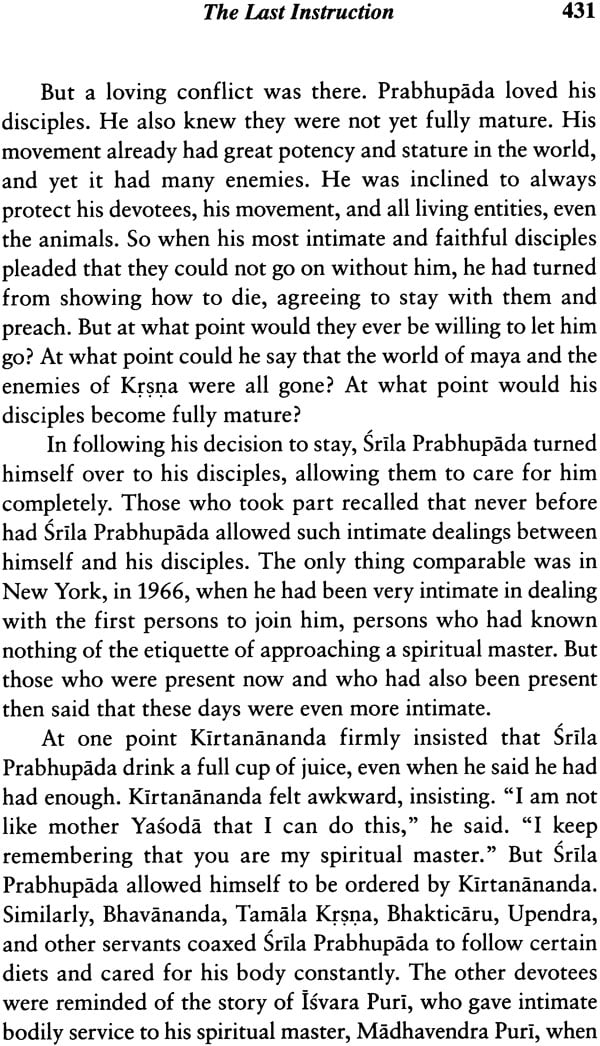