Pranami faith was founded by Sadguru Devchandra (1581-1655 AD) and Mahamati Prannath (1618-1694 AD). After devoting 40 years of his life in search of the reality of this perishable world and the relation of soul with the Almighty, sadguru Devchandra had the great privilege of realizing the appearance of Lord Krishna who blessed him with the divine knowledge of His Abode (Paramdham) and Tartam Mahamantra. Sadguru Devchandra established a religious centre at Jamnagar called Navtanpuri Dham. His preachings were elaborated by Mahamati Prannath in the form of 18758 verses compiled in Tartam Vani. This eternal message was promulagated by Mahamati, who travelled to many places in India (Jamnagar, Surat, Ahmedabad, Vrindavan, Delhi, Haridwar, Anoop-Shahar, Udaipur, Aurangabad, Ram Nagar, Panna etc.) and in Arab countries (Basara, Bagdad, Masqat, Abbas and Thatta). He established another major centre of Pranami faith at Surat, known as Mahamangalpuri. He ultimately settled at Panna where the King Chhattarsal, became his disciple, and also established another major centre-Padmavatipuri Dham.

The eternal knowledge of Pranami faith has been further disseminated by holy saints and religious preachers for last 300 years and now more than 600 centres are set up by the followers in India and other countries like Nepal, Bhutan, Canada, UK, USA, Australia and Singapore. Presently there are almost five million followers of this faith. Shri Prannath Mission, Delhi, is a publication centre of Pranami faith.

'Mahamati Prannath calls upon his soul and souls of all the companions of the Abode that by awakening they can attain the joys of His divine love and compassion.'

The dictionary meaning of Saagar is ocean or a big river. Mahamati has christened a part of his grantha as Saagar. It is basically an ocean of metaphysical experiences of divinity and faith. Comprising of 15 sections and 1128 verses, this book descended during the period VS. 1740-1748 while Mahamati was in Panna. The other book, Parikarma, was composed just before this. The eight oceans mentioned in that book, namely - Noor, Neer, Ksheer, Dadhi, Ghrit, Madhu, Ras and Sarva Ras are related with feelings and experiences of the souls gathered in the meeting hall (Mool Milava) of the Abode.

Noor - The first ocean represents the ocean of togetherness of the souls. Twelve thousand souls seated like an still ocean with any disturbance, its radiance spreading in all directions. Neer -It is the ocean of the splendour of the souls. Its magnificence is too brilliant to put in words. Here all the souls are sitting in a manner that they look alike and there is no distinction between them.

Ksheer - The third ocean is of non-duality meaning that the physical appearance, feelings, love and gestures of the souls are the same of all. Their thoughts and behaviour is pure and melodious.

Dadhi - It is concerned with the adornment of the divine couple and companion souls. Mahamati has described the embellishment of the Lord (Shri Raj Jee) three times, His chief soul (Shyama Jee) twice and one time ofthe comapnions. In between the glory of the meeting hall (Mool Milava) has been included. In this way the decorations and prettiness of the divine couple, seated on the beautiful throne and all the companions sitting around them has been explicitly explained. Ghrit - This fifth ocean is of eternal love. In the Abode there is love all around. There talks, behaviour, feelings and gestures are filled with love only.

Madhu - The eternal wisdom is the content of this ocean. This is also called 'Ham Landuni' or 'Tartam Gyan'. This knowledge is without any doubts and apprehensions and appeared in this world as TARTAM VANI.

Ras - The eternal relationship of the Lord with His consort and companion souls is theme of this ocean. This connectivity between them is pure and everlasting. Sarva Ras - This last ocean is the ocean of His mercy and compassion. His command, will, zeal, love and wisdom follow His benevolence. It is said that when the Lord smiles His face, nose, eyes, forehead, ears, hands, feet and heart are filled with such a joy that at that very instant eight streams start flowing from there and eventually become eight oceans of Prikarma. Lastly it is my pleasant duty to express my gratitude to Dr. R. K Arora whose untiring efforts have resulted in carrying out this English translation of Saagar and other books of Kuljam Saroop. This entire activity is encouraged and inspired by Shri K.K Mehta and Smt. Vimla Mehta. Dr. Pran Gilotra was associated with the editing of the manuscript.

Saagar literally means an ocean, but here it is not an ocean of water-it is a treasure of divine love and bliss. By having a dip into it one can experience the utmost delight and eternal joy. A tiny drop of this profound ocean is good enough to take one's attention away from the worldly involvements and create a direct link with the Lord. The verses of Saagar give a symbolic description of the spiritual love whose depth and vastness is too large to express it in any language of this world. The importance of this love, narrated in terms of relationship between the human and divine form, is so beautifully narrated in minute details like the communion of our finite words with the infinity of the Lord. By just a reading of this one gets a feeling of all the effulgent forms of divine grace and His eternal bliss.

Mahamati Prannath has described the relationship of the Lord with souls by symbolising it in the eight forms of ocean. The first among them is the Ocean of Light-Noor Saagar and the second is the Ocean of Beauty- Shobha Saagar.

The first ocean comprises of radiations of bright illuminations while the second is of enormous beauty. The inner eyes of those awakened can see waves arising there of innumerable colours. It must be appreciated that illumination is bliss and bliss is illumination. By properly concentrating the faculty of sensing the glorious beauty one can bring oneself close to the Lord's multifarious forms of splendour and dignity which are contained in this ocean itself.

The third is the Ocean of Transparency-Kshir Saagar. The kshir is a delicious dish formed out of milk, rice and sugar which after cooking makes the ingredients inseparable. The case of souls and the Lord, in the Abode, is like this.

The third ocean is the hearts of the souls which emphasises their non- duality with the Lord as He always resides there. How much closely and intimately, almost embracing each other, they sit together with the Lord in their hearts, can be visualised here.

The adornment of the Lord and consorts is the theme of the fourth Ocean of Adornment-Singaar Saagar.

The adornment of the enchanting twin adolescent forms of the divine couple is described in this ocean. They radiate the channels of bright rays of variety of colours and the souls revel in them. These decorations are a matter of delight and contentment for all.

The Lord is the ocean of love and He and souls are the same and one in nature. Both the forms are in giving and receiving modes of enjoying the drinks from the ocean of bliss which is measureless in all dimensions. This is the fifth Ocean of Love-Ishka Saagar.

The fifth ocean of perfection is about the blossoming oflove.1t is mysterious as well as infinitely deep. The souls enjoy in it to their hearts' content and drink its nectar to their fill.

The divine wisdom is the profundity of the sixth Ocean of Divine Wisdom- flam Saagar. Its vastness is infinite and symbolises the greatness of the Lord. It centres around the deep harmony between the souls and Him. With the bliss of divine wisdom the soul also becomes infinite. It is just like the flute being blown by Krishna. The divine wisdom clarifies the mystery of how and why this universe came into being and about the relationship between Him and His consorts. The integral knowledge of TARTAM is the key to all such developments.

According to Mahamati the seventh is Ocean of Relationship-Nisabat Saagar. It surges up in the form of waves full of bonds of love. The radiance and lustre combined with waves are not within the reach of this worldly tongue to describe. The bonds between the Lord and consorts are based on the spirit of love which always keeps overflowing. The divine wisdom also emerges from it. Their everlasting relationship aspires spiritual awakening and leads to transcendental depth of spirituality.

The Ocean of Grace- Meher Saagar is the last in this series of oceans. This grace is such that He is neither only the love and light, nor only the beauty and knowledge, but also beholds the quality of transparency of their relationship.

The grace comes from the divine will and the consciousness emerges out of grace. Love is also the fulfilled desire of grace and its inseparable companion is divine wisdom.

The idea of His infiniteness is the outcome from the eight oceans and also of the blissful creativity of the Lord and the souls. Manifestation of His glory and grace is very explicitly brought out by Mahamati in SAAGAR. 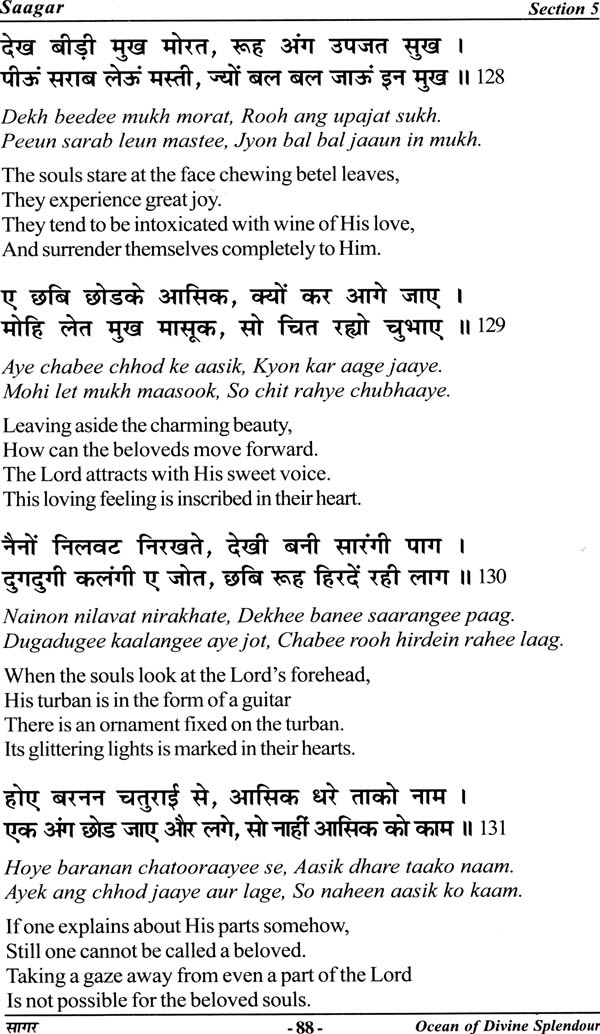 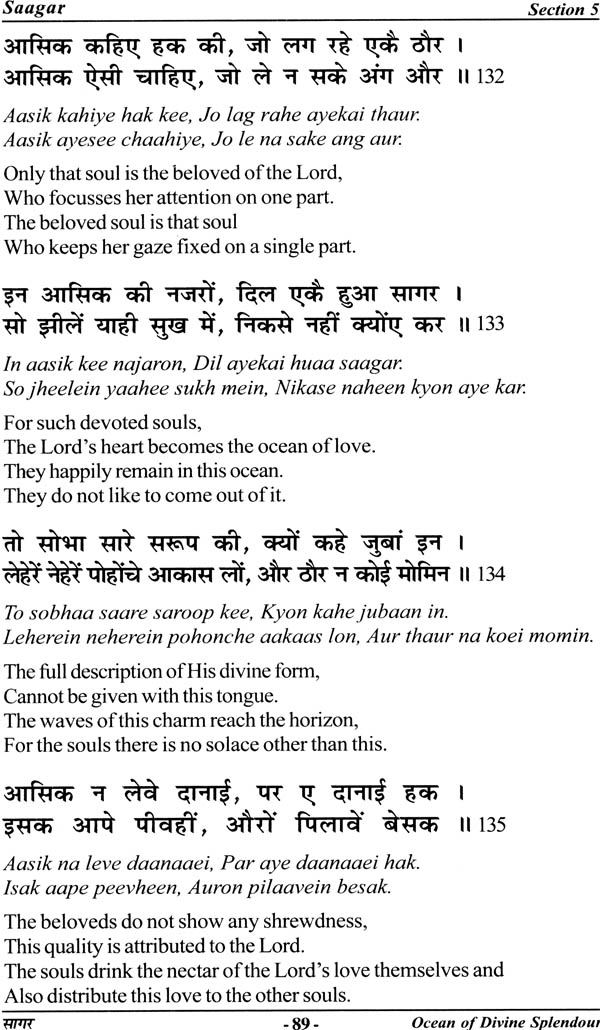 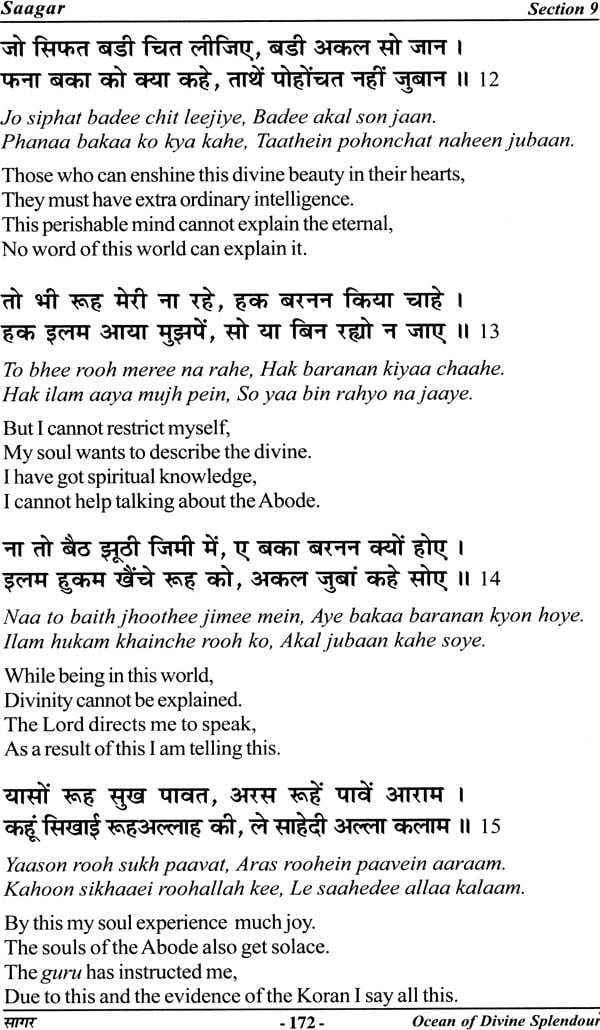 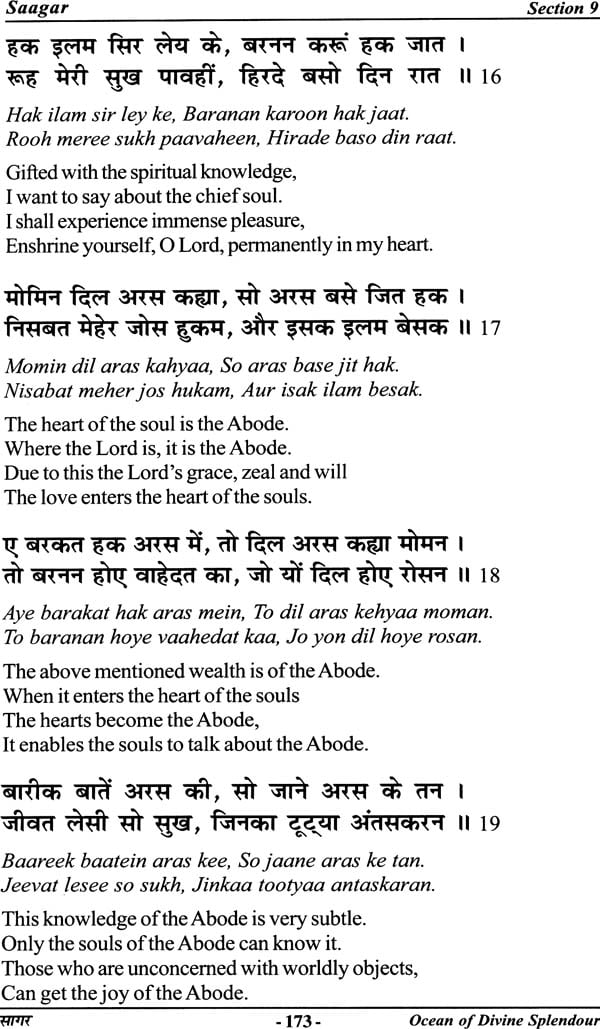 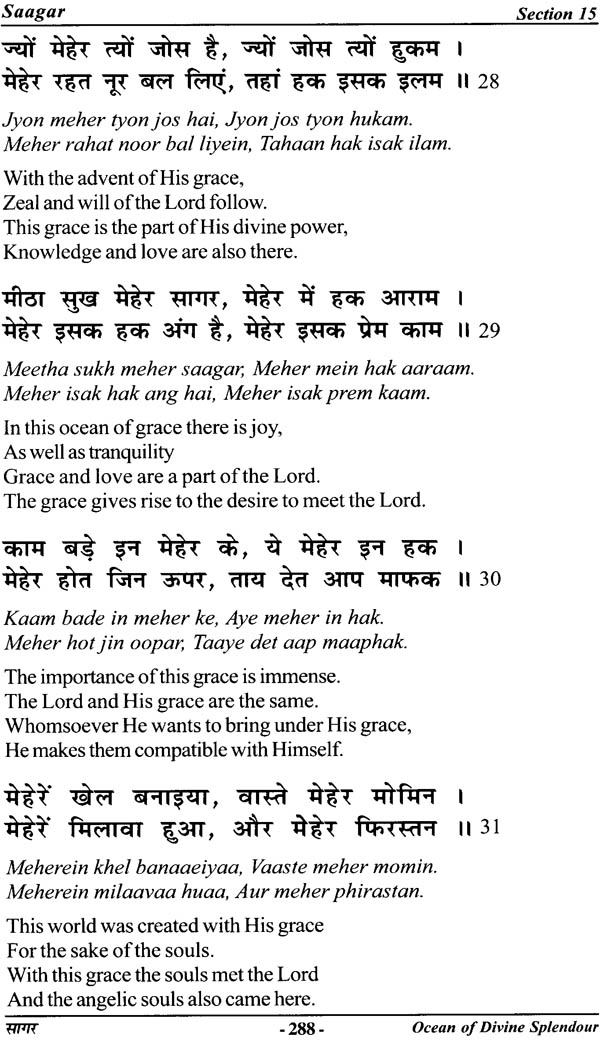 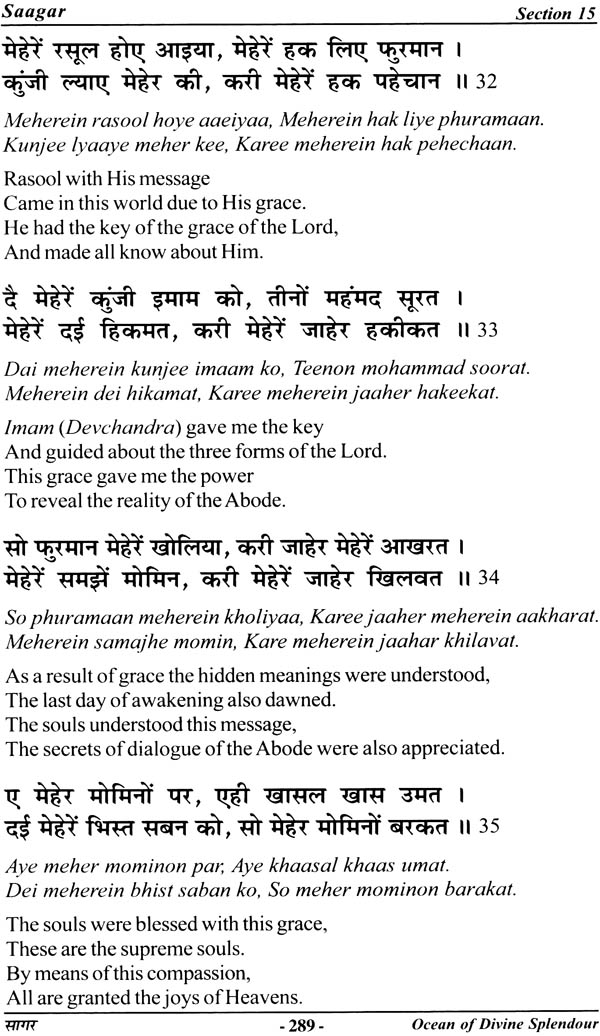 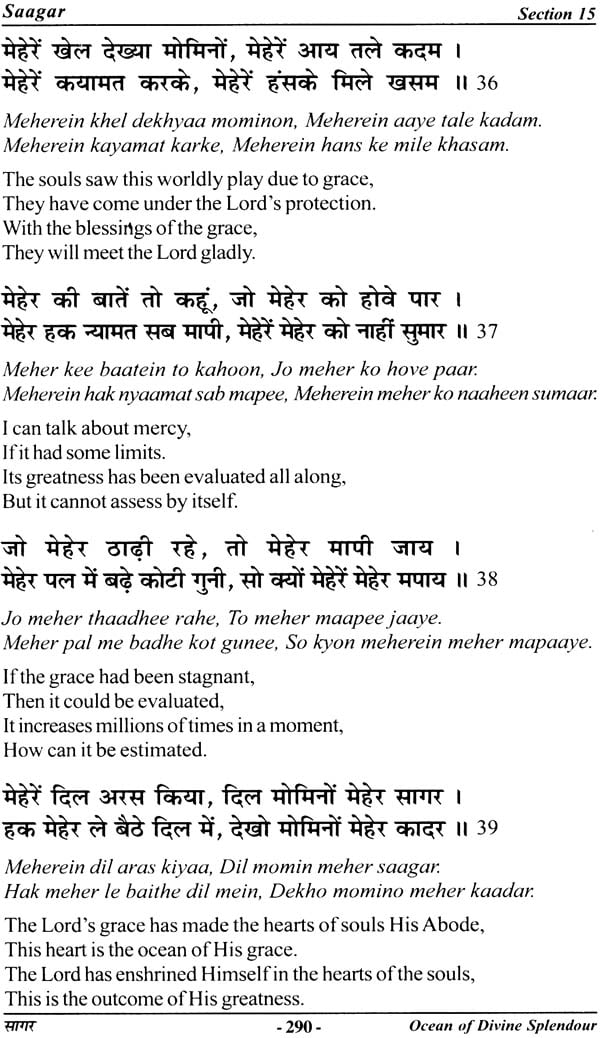 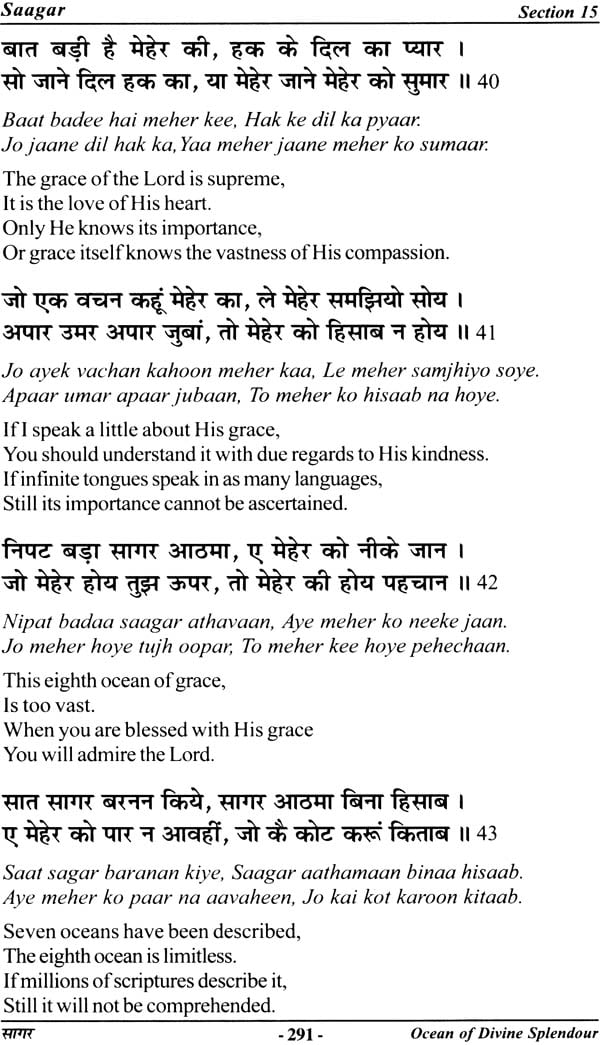