Sankhya and Science (Application of Vedic Philosophy to Modern Science)

Since the time of Descartes, science has kept questions of mind and meaning outside science, and in recent times materialists aim to reduce mind and meaning to matter. Both approaches have failed. There are problems of meaning in mathematics, computing, physics, biology and neuroscience. A new view of nature is needed, one that integrates matter and meaning more directly.

The Vedic theory of matter-called Sankhya -shows a path fruitful to the resolution of modern scientific problems. In Sankhya, material objects are created when the mind transfers meanings or information into space-time. These objects are not meaningless things, but symbols with meanings.

The book will be of interest to both scientists and philosophers, especially those looking to integrate mind and matter without stepping outside the rational-empirical: approach to science

The picture of reality in modern science contradicts the idea that we have minds which enjoy and choose. This contradiction creates a problem: Should we discard a science that gave us all the fancy technology or discard the idea that we 'enjoy' this technology? Most modern scientists believe that the current materialistic approach to matter has been so successful that it will eventually explain mind and consciousness. However, progress in this direction has been scant. While science has uncovered facts about the brain and biology, basic questions of meaning and choice remain elusive. In fact, these questions are so hard that a solution may eventually be impossible without discarding many fundamental assumptions in current science, and starting all over.

The thought of a reboot in science is scary, and, most scientists entertain only incremental additions to current science. The incremental approach is further reinforced by the fact that attempts to explicitly add mind into science have not worked and they end up as pseudoscience, making no verifiable predictions or even theoretical revisions. Most scientists therefore view any alternative approach suspicion.

But there are others who consider the problem of the mind serious enough to keep trying alternative approaches, no matter how different they might seem to current ideas and practices in science. As a reader of this book, it is possible that you belong to the latter group. This book presents an alternative approach to the study of matter upon Vedic theories on matter. The Vedic approach is radically different from the approach taken in modern science vis-à-vis matter. While modern science attempts to derive consciousness from material, the Vedic philosophy describes the creation of objects consciousness.

I came across Vedic philosophy about 20 years ago. At that time, I was quite surprised that philosophers who had no access to modern technology could have formed theories of material nature, and curious as to whether these theories would be of any relevance to modern science. It was likely, for instance, that there would be no empirical proof of these theories and we just might have to accept them based on faith. However, as I delved deeper into the fundamental assumptions underlying the modern and Vedic approaches to describing nature, it became clear to me that the Vedic approach can also be scientific in the modern sense of theory and experiment, although these two sciences had very different assumptions, theories and methods of doing experiments.

As I explored more, I found almost no serious scientific or philosophical study that connects the theories of material nature in Vedic philosophy to those in modern science, in a way that could shape the future development of modern science. Most of what I found was New Age books that lack the rigor and clarity which is necessary to actually do new science. These books might be useful for understanding alternative philosophical views of nature, but they are not adequate to solve scientific problems. This book tries to address that gap. It under-takes an analysis of the ideas in Vedic philosophy and what they mean for different fields of science, such as mathematics, physics, chemistry, biology, and neuroscience. The last chapter in this book discusses how these fields of science would change by the application of Vedic ideas.

Most of the discussion on Vedic philosophy currently happens in two broad contexts. First, there are the spiritualists who seek to understand Vedic theories and practices for spiritual gains; they delve into the mystical aspects of the philosophy and learn from spiritual masters the intricacies of what they consider to be the pursuit of truth, leading to the perfection of their lives. Second, there are the Ideologists who analyze the historical evolution of Vedic ideas as part of Asian Studies departments in academic institutions; they view the ideas in Vedic texts to be of historical interest but not necessarily true. The spiritualists are generally unconcerned about what the academics write in their journals because for them spirituality is a living tradition to be learnt from an enlightened master and not from someone with an academic degree. The academics, similarly, are unconvinced that there is any truth to the Vedic texts. There is pity little being done today by way of connecting the theories in the Vedic texts to the developments in modern science. This book hopes to bridge that spiritual-academic divide.

The connection between Vedic ideas and science can happen only if one begins with the idea that there is indeed truth in the Vedic texts. To demonstrate that truth, it is imperative to connect the Vedic ideas to those in modern science as alternative tracks of scientific research. This is precisely the type of approach this book will undertake. To me, any alternative approach to the study of material nature is viable only if it can solve problems that modern science cannot. If Vedic philosophy describes nature in a different way, and these descriptions are true, then they must also be relevant to the solution of the currently unsolved problems in modern science. Specifically, I will not be discussing the historical evolution of Vedic ideas, who wrote what and when, whether Vedic ideas are ancient or recent, whether Vedic philosophers were natives of ancient India or whether they emigrated from elsewhere, etc.

My primary interest in this book is whether Vedic ideas are true, in the specific sense of modern scientific theory development and problem solving, because if they are true then it makes more sense to analyze the history of Vedic ideas as we would have a much clearer sense of importance attached to Vedic philosophy. If ideas in Vedic philosophy are not true, then studying the history of these ideas is only an academic curiosity, which may be interesting historically but not scientifically. 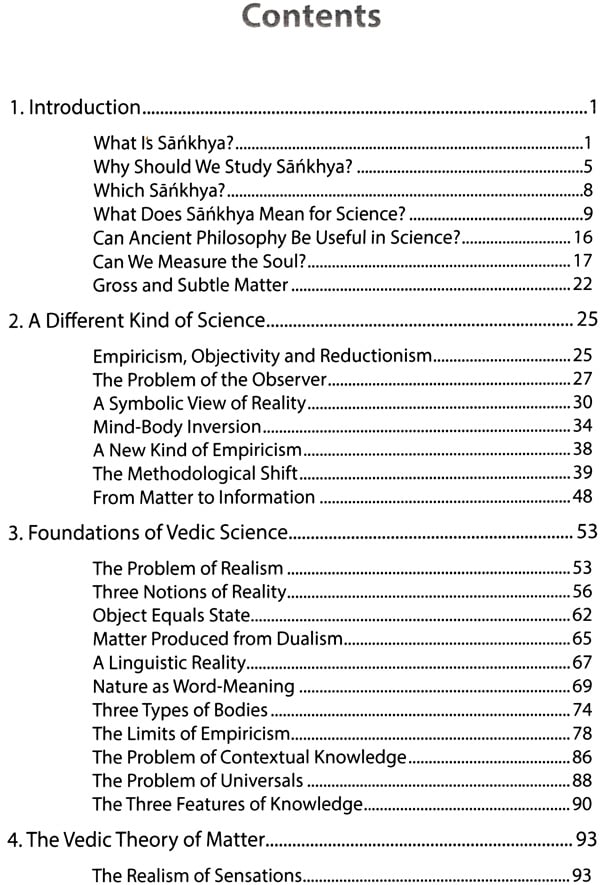 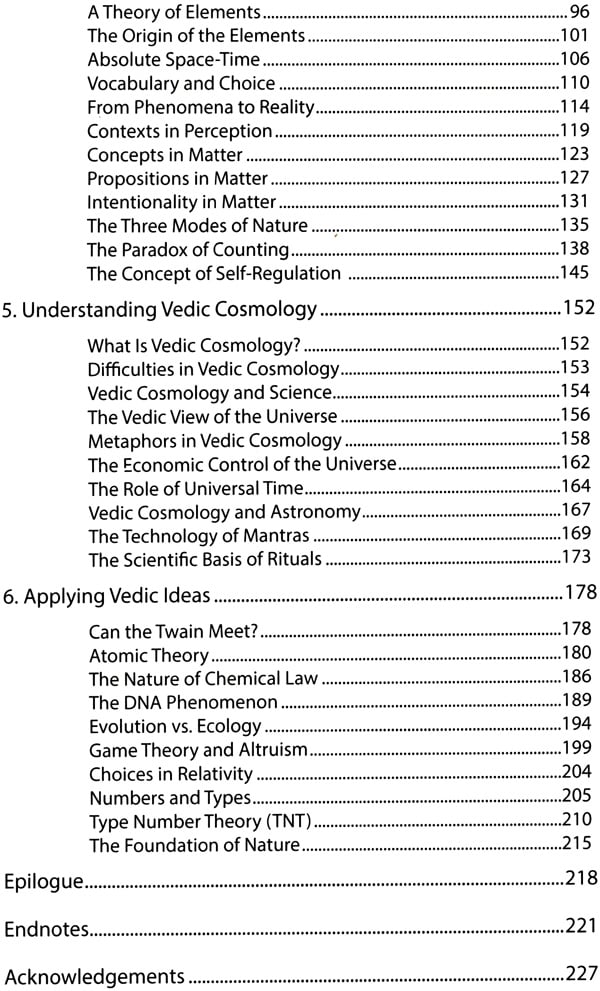 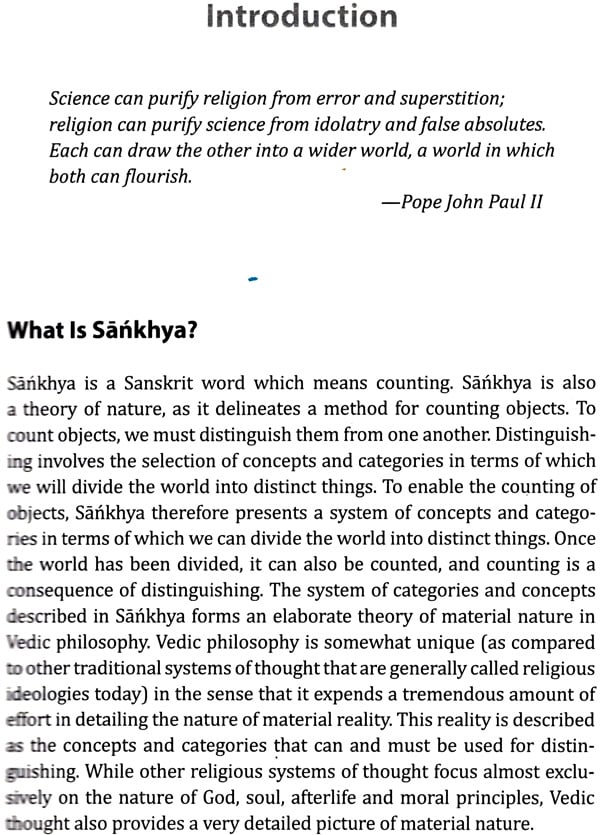 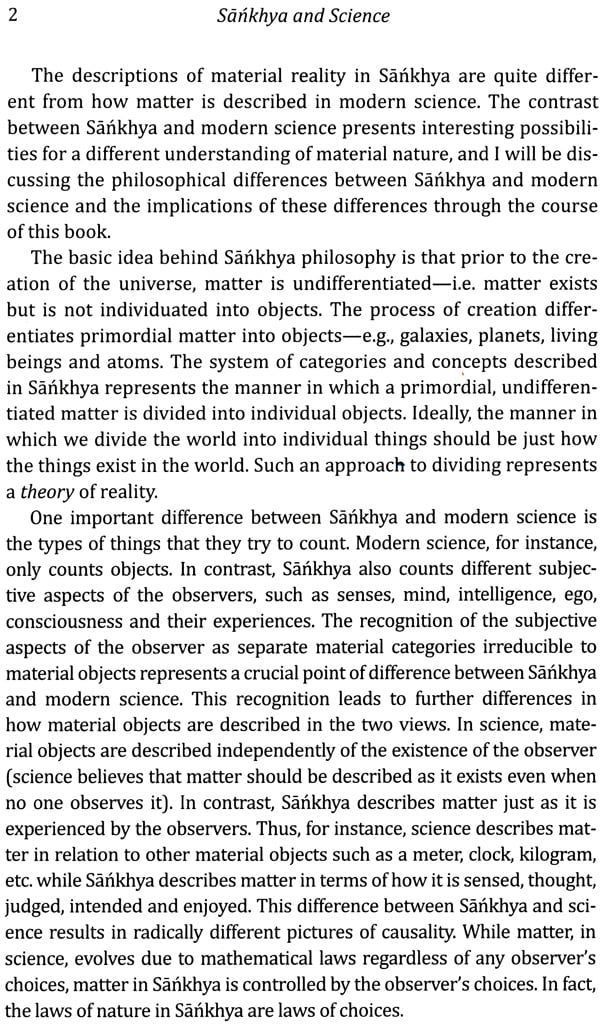 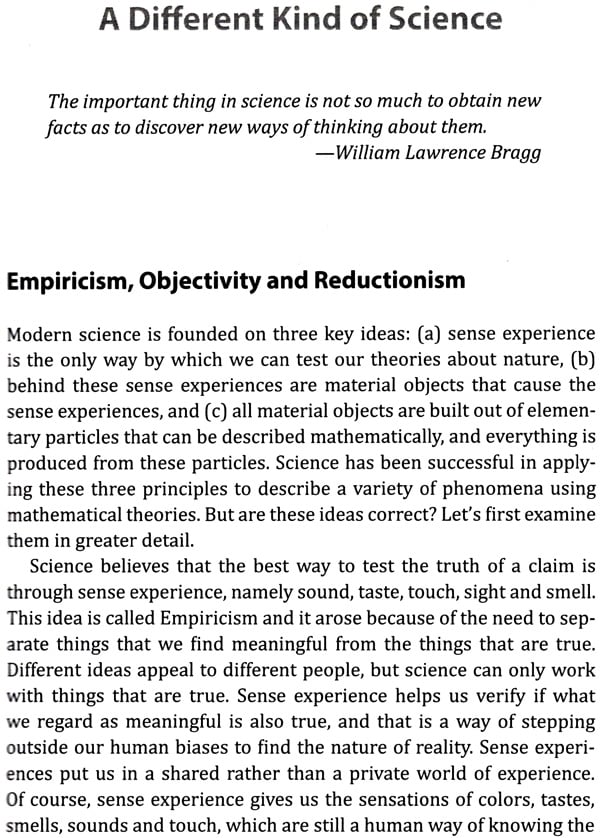 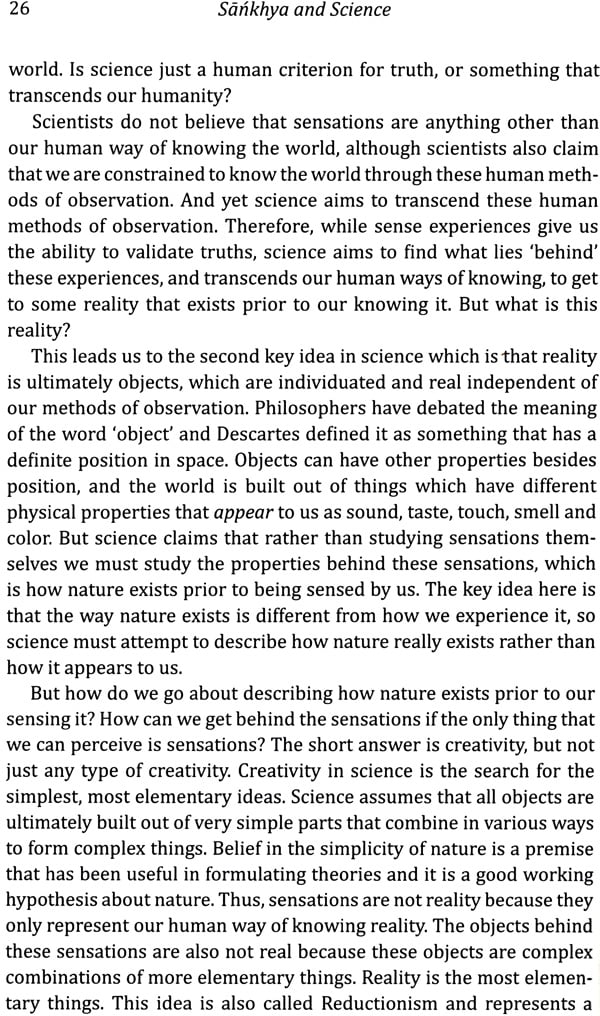 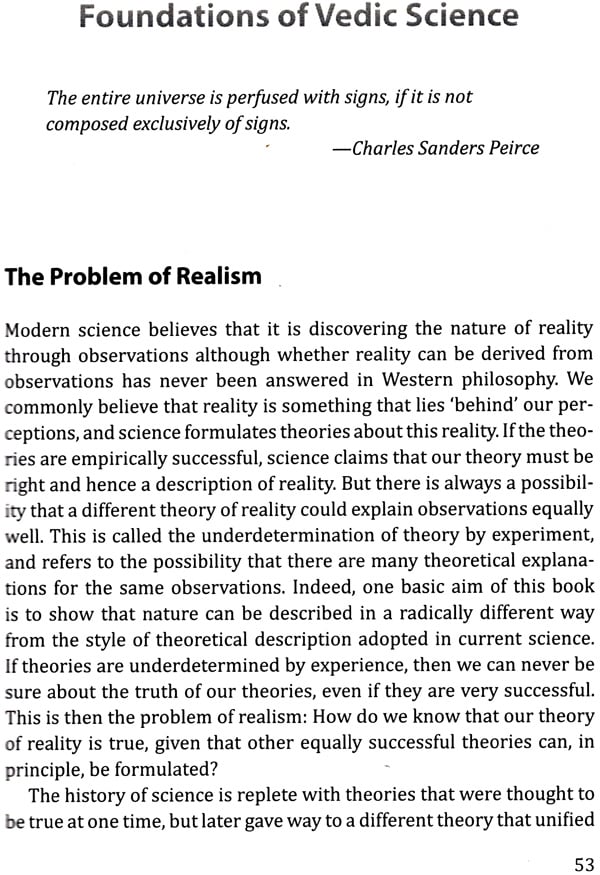 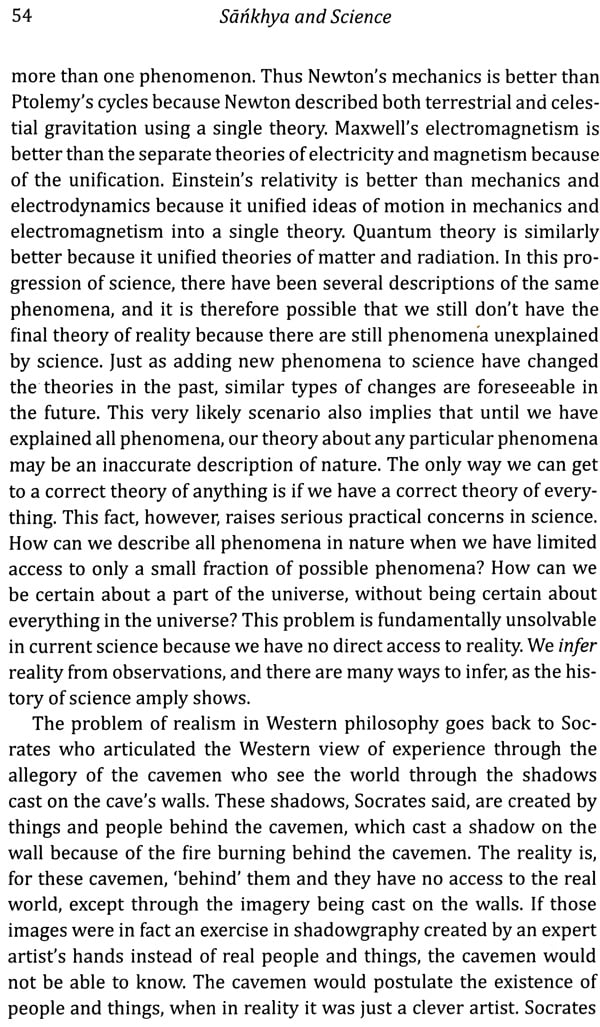 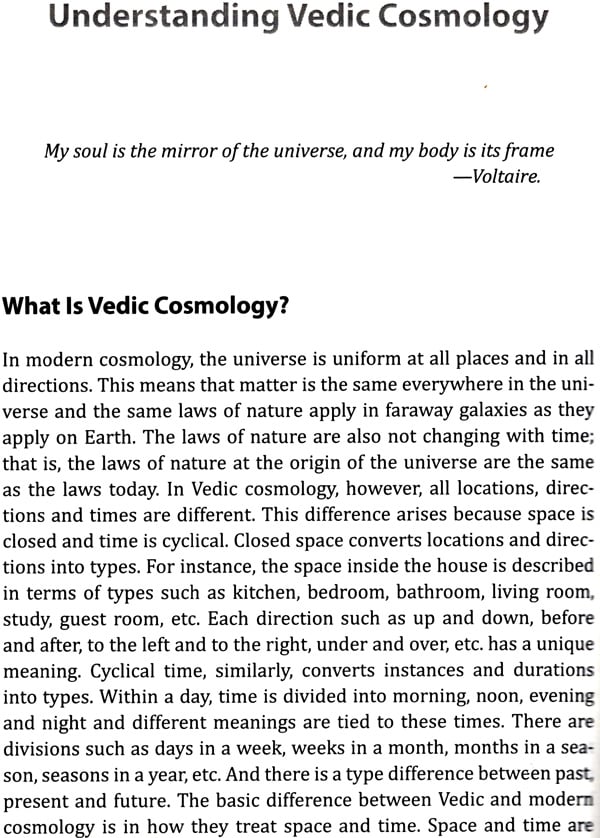 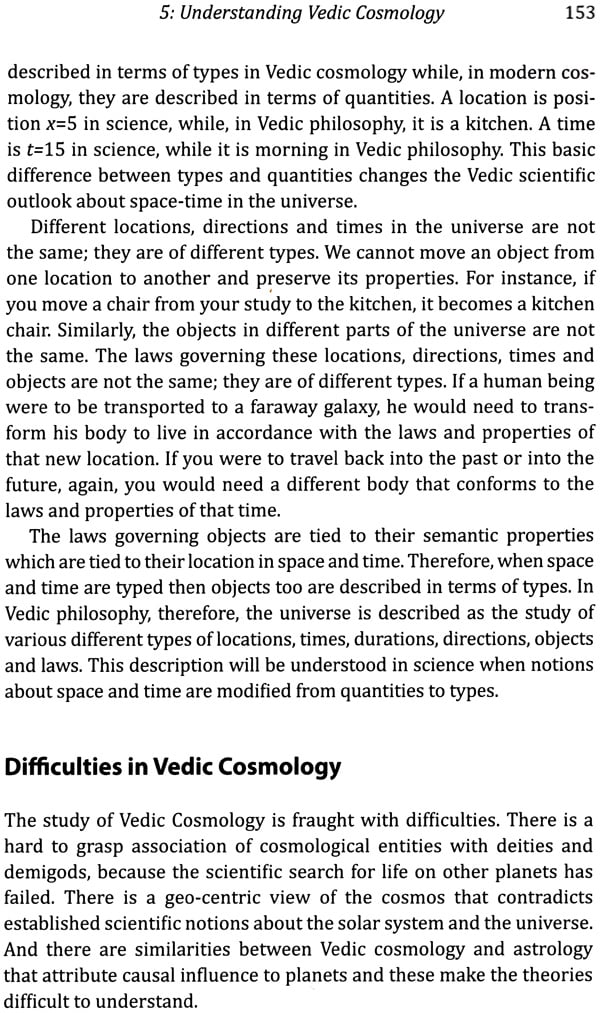 A Study of The Sankhya-Karika of Isvarakrsna
By S.P.Das Gupta
$15
Out of Stock Classical Samkhya An Interpretation of its History and Meaning
By Gerald James Larson
$28.50
FREE Delivery The Science and Philosophy of Religion
By Swami Vivekananda
$7