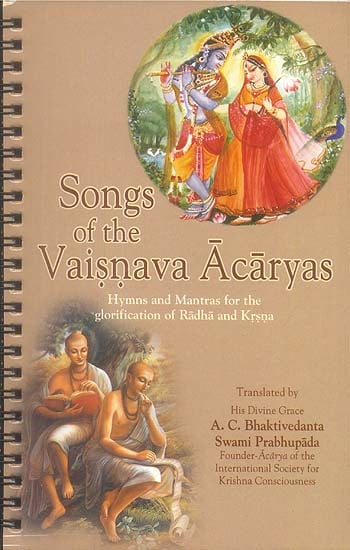 The International Society for Krishna Consciousness was established in New York in the year 1966. After my arrival in the United States in September of 1965, I personally underwent a difficult struggle, and in 1966 I rented a storefront and apartment at 26 Second Avenue. When ISKCON was incorporated, a boy named Chuck Barnett joined me, along with a few others, to form the nucleus for the institution’s future development. At this time I used to chant the Hare Krsna maha-mantra underneath a tree in Tompkin’s Square Park in New York. Sriman Barnett and another boy, Bruce, were the first to begin dancing in front of me, and others in the audience joined them. The New York Times published a report of this, with our picture and a headline declaring that I was attracting the younger generation to the Hare Krsna movement.

When I became sick in 1967, I left the United States and returned to India. Sriman Acyutananda could not remain separated from me, and therefore he joined me in Vrndavana when I was staying there. Since then, Acyutananda Svami has worked very hard in India. He has preached extensively in Calcutta and other parts of Bengal, he has learned how to sing in Bengali and play mrdanga like an expert professional, and now he has compiled this book of Bengali songs with English explanations.

I am greatly pleased to see this collection of songs composed by '1`hakura Bhaktivinoda, Narottama das, and other great acaryas of the Gaudiya Vaisnava community (sampradaya). Songs composed by the acaryas are not ordinary songs. When chanted by pure Vaisnava who follow the rules and regulations of Vaisnava character, they are actually effective in awakening the Krsna con- sciousness dormant in every living entity. I have advised Sriman Acyutananda Svami to sing more songs of the Vaisnava padavali and record them in books so that my disciples and others in the Western countries may take advantage of this chanting and thus advance in Krsna consciousness more and more.

I confer all my blessings upon Acyutananda Svami for this genuine attempt to advance in Krsna consciousness. I hope he will thus advance more and more never be hampered by maya. We should always remember the danger of maya’s influence and endeavor to save ourselves from her great power. We must therefore always merge in the transcendental mellow of kirtana-rasa, for kirtana-rasa is the safest situation within this material world. Hare Krsna.

It was my good fortune to be in the service of Srila Prabhupada at Sri Mayapur, the birthplace of Lord Caitanya, in setting up the groundwork of our Society’s international center there. That year (1971) there was a terrible flood, but although for many days the water was rising, it was diverted from flooding the Society’s property solely due to the embankment created by a road constructed by Srila Bhaktisiddhanta Sarasvati, our Parama Guru Maharaja. I wrote a letter to His Divine Grace explaining the situation and I mentioned, "The water has not entered our property. Srila Bhaktisiddhanta’s road has saved us." Srila Prabhupada, how- ever, wrote back in answer in a different tone: "Yes, we are always saved by Srila Bhaktisiddhanta’s road, so go on glorifying the disciple succession, and your life will be a great success." Later on, when I suggested writing down the songs of Srila Bhaktivinoda Thakura and Narottama dasa Thakura in English translations, His Divine Grace said, "Yes, we must push on this mission of Bhaktivinoda." So here in this book, which is the first of a series of translations of the complete works of the Vaisnava acaryas in the line of succession coming after Sri Caitanya Mahaprabhu, I have also included a short life sketch of Thakura Bhaktivinoda. In the following volumes, the lives of Srila Narottama dasa Thakura, Srinivasa Acarya, and other Vaisnava acaryas will appear.

The songs in this book are mostly by Thakura Bhaktivinoda and Narottama dasa Thakura. While they may sometimes make awkward English poetry, the translations are accurate renderings of the originals. All these songs have exquisite melodies, and cassette recordings are available to accompany the book. It should be noted that these songs and verses are all explanations of pure devotional service and that devotional service to Sri Krsna is obtained only by the mercy of the spiritual master, which can be obtained by serving his desires perfectly. These songs are not substitutes for the main and prime benediction of the age of Kali, the congregational chanting of Hare Krsna, Hare Krsna, Krsna Krsna,. Hare Hare! Hare Rama, Hare Rama, Rama Rama, Hare Hare, which is of the utmost importance. They are verses which have expanded from the mahamantra, and they are explanations of the maha-mantra. Thus, because they are expansions of the maha- mantra, they are non different from it.

The songs of Srila Narottama dasa and Bhaktivinoda Thakura are non different from the Vedic mantras. But, as stated by Srila Prabhupada in The Nectar of Devotion, even if someone does not have initiation into the Gayatri mantra, the chanting of Hare Krsna, Hare Krsna, Krsna Krsna, Hare Hare Hare Rama, Hare Rama, Rama Rama, Hare Hare is sufficient to enable one to attain the highest perfection of spiritual life.

The verses of these songs are wonderful sources of knowledge for preachers of Krsna consciousness. In each and every line there is so much philosophy that one can preach from one line for hours. They are all so pregnant with meaning and they lead to such succinct spiritual conclusions that a preacher need only recall the simple lines of songs like Bhajahu? Re Mana, Sri Rupa Manjari Pada, Ohe Vaisnava Thakura, or the Sri Manah -siksa, and every point of Krsna consciousness will be covered in detail. Srila Prabhupada is constantly quoting from these lines in his lectures and books, and here also in this book his commentaries are given. Wherever Srila Prabhupada has translated a song, no separate translations have been given, for his are complete in themselves. This is the first time that these transcendental vibrations have appeared in the English language hand to introduce them I am including herewith a life sketch of Srila Bhaktivinoda Thakura.

Songs of Other Vaisnava Acaryas 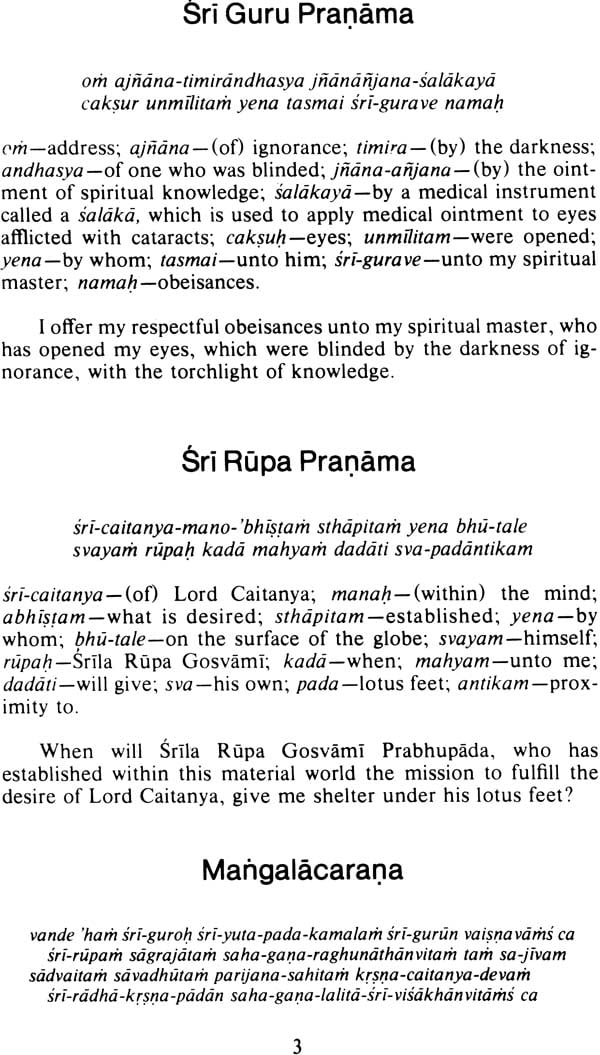 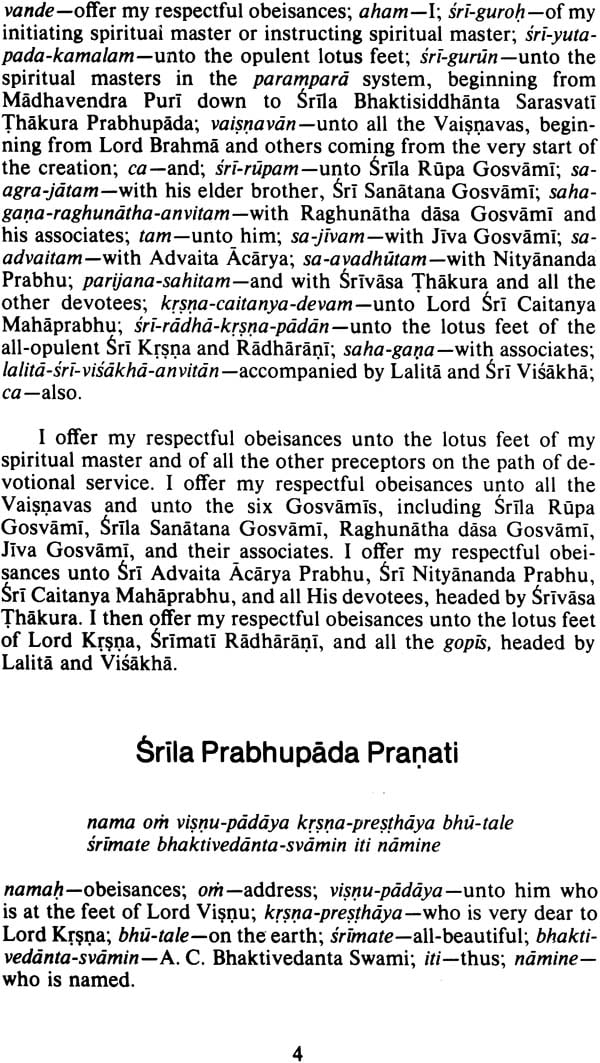 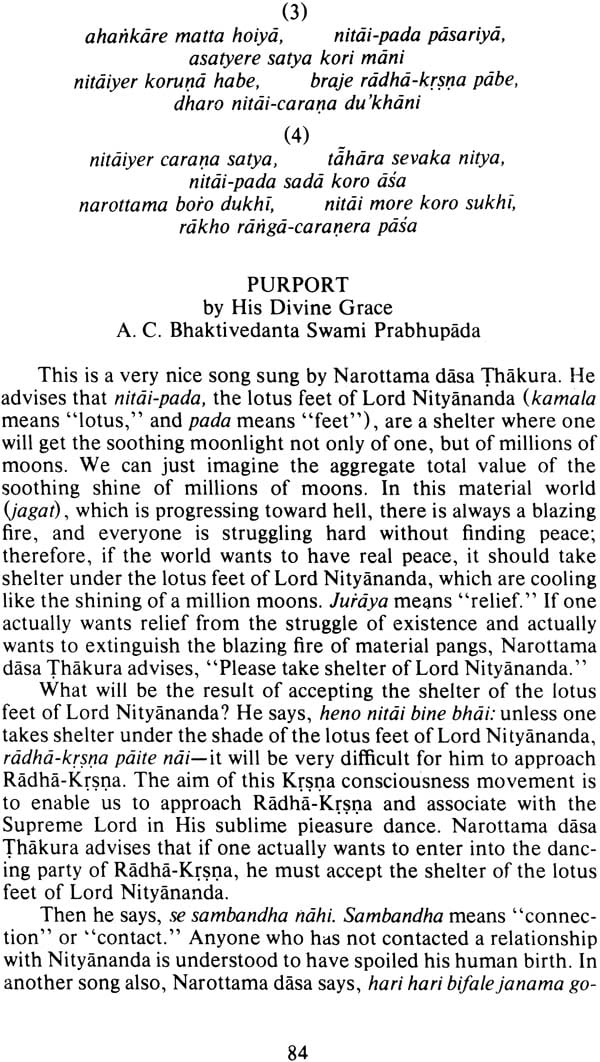 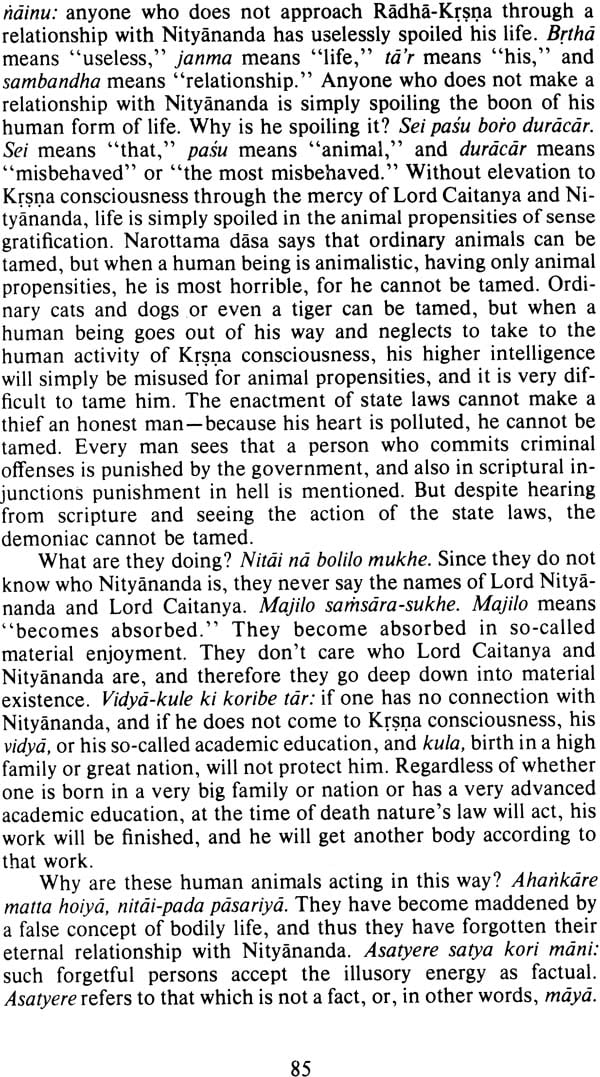 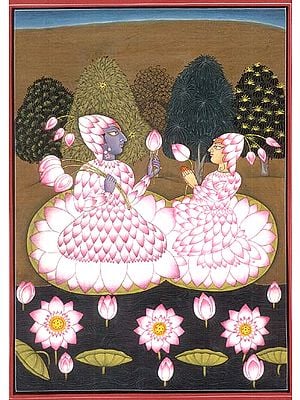