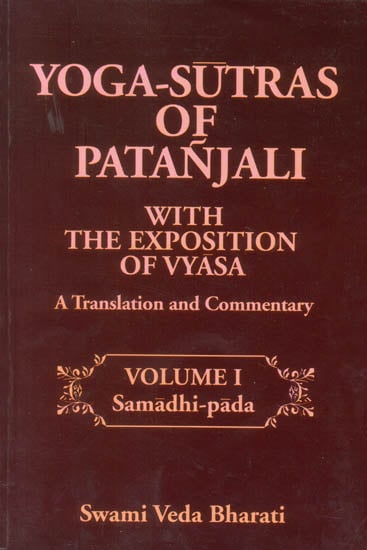 Designed expressly for the serious practitioner of yoga, this is an outstanding work of scholarship that is meant to be eminently practical even to those students who have no previous familiarity with the Yoga sutras.

This volume the first of multi volume work contains an extremely valuable and highly readable general introduction that includes an overview of Samkhya-Yoga, as well as an extensive Glossary and index.

For each sutra a word by word translation is supplied followed by vyasa's commentary and then the author's discussion which presents the views of more than a dozen preeminent commentators in the process of explicating and clarifying the text.

Swami Veda Bharati was born in 1933 in Dehradun, India, and raised in the centuries-old Sanskrit tradition. Holding a BA and MA (London) and DLitt (Holland), Swami Veda Bharati has been a world-renown teacher for over 60 years. Initiated into sanyasa in 1992 by his master, Sri Swami Rama, Swami Veda Bharati is the spiritual director of Sadhana Mandir and Swami Rama Sadhaka Grama, both in Rishikesh. A prolific writer and speaker, he is author to numerous books, including Yoga-sutras of Patanjali, Philosophy of Hatha Yoga, and God.

Yoga is a most ancient science, which has been taught for thousands of years. Patanjali systematized and organized it by formulating 196 aphorisms, which are called the Yoga-sutras. Some scholars say Patanjali was born about 4,000 B. C. and others 400 B. C. but the exact date is unknown, Patanjali was the codifier of yoga science. He was a scientist who practiced and who gathered together the information on yoga and presented it in a concise form. The word sutra actually means “string,” and every aphorism is like a single flower on a garland. Patanjali made the sutras succinct because in ancient times students learned the sayings of the great teachers by heart. This succinctness enabled the students to easily memorize these truths. In those days, there was a very close relationship between the preceptor and the student, who was taught through this oral tradition. Only the competent and accomplished yogis could impart this knowledge to their students.

Patañjali describes the entire philosophy of yoga science in the Yoga-sutras, and the first four sutras summarize the most important aspects of this science. The first aphorism says, “Now, then, and therefore, yoga science and discipline is being expounded.” This means that the student of yoga should understand that without discipline, he cannot tread the path of yoga. Only discipline will help him on the path of enlightenment. The first word of the first aphorism is atha. Atha means “now, then, and therefore.” It indicates that there is something important that needs to be understood before one practices yoga. In most of the darshanas (schools of philosophy) the word atha has been used as the first word at the beginning of such scriptures, and most commentators think that the word is auspicious. In reality, it indicates that the student is prepared, for the preliminaries have been completed. Many students eagerly study from scriptures and they briefly try to practice, but they find it very difficult, and then give up the practice. Thus, they don’t make any progress because they have not gone through the preliminary steps of training. The first sutra means, “Now the student may attain this step. “This indicates that the student has already studied philosophy, he has studied the necessary shastras (scriptures), mid now the yoga discipline is being expounded and taught. So the word “now” denotes that the student has already accomplished something. The student or aspirant has already committed himself to the path and has said, “Yes, I’m committed to the path. I’m determined, and I want to follow the discipline. Discipline will assist in my growth: it will help me to attain Ii her liberation.

The word yoga is very ancient and is found in the Vedas, the most ancient scriptures known to man. it comes from the root yuj, “to unite.” Yoga is the union of the individual soul with the Absolute One, the student of yoga has the capacity to unite himself with the Cosmic One. He can do it if he is fully prepared, determined, and desirous, and if his mind is made one-pointed. The modern student asks whether he has to renounce the world to attain the goal of yogic science. Yoga science says that while one does not have to renounce the world literally, there are conditions required for all sadhana (spiritual practice). Sadhana requires that discipline must be systematically applied. Yoga science does not lay down commandments, but it requires commitments. If one is committed to know the truth, and has the capacity and the ability, then he can attain the highest state of wisdom samadhi. When no worldly fetters bind one, when nothing disturbs the mind, then one knows low to live in the world and yet remain non attached. Yoga science recommend neither renunciation from the world nor excessive involvement in the world. Yoga requires that the student avoid these two extremes. Patanjali leads one to know the real Self, whether one is a renunciate or a householder. One simply has to act in a way so that the goal, which is contentment, can be attained. Absolute contentment means a state of equanimity, tranquility, and equilibrium.

The purpose of this science is to help students know their potential and understand the various levels of their being, so that finally they reach the highest state. The teachings of yoga science are threefold: how to live within oneself, how to live in the external world, and at the same time how to link the two and create a bridge. Then one is liberated here and now.

The second sutra provides the definition of yoga: Yogash chitta vrtti nirodhah, “Yoga is perfect control over the mind and its modifications.” That is the definition of yoga. But there is another message to the sutra; the other meaning is the assurance that with the help of yogic practices, as explained by Patanjali, a student can definitely have such control over his mind and its modifications.

The definition given by Patañjali explains the ultimate goal of yoga science. Yoga science is related to the mind, and mental life in its totality. By practicing the method of yoga, one can attain perfect control over the mind and its modifications. Yoga psychology is the most ancient school of psychology, which describes systematically, from the very beginning, how to know, analyze, and direct the mind, so that one can attain the purpose of life. The mind is one’s finest instrument. The body is the grossest instrument, and breath is another, somewhat finer, instrument. The senses are also considered instruments, but mind is the finest instrument of all. A yogi is he who has complete control over his body, senses and mind. When he has accomplished that, he has the capacity to unite himself with the Ultimate Truth.

First, one has to know the mind thoroughly with all its modifications. Once the mind is understood, then it does not create obstacles for the student. A yogi is one who knows the technique of uniting himself with the Ultimate Reality. Thus, the second sutra explains yoga science; it is a definition of yoga science.

The third sutra explains that when one has control over the mind and its modifications, he establishes himself in his essential nature. Man’s essential nature is peace, happiness, and bliss. The ordinary person forgets his essential nature and identifies with his thoughts and the forms and objects of the world. Patanjali says that the essential nature of a human being is distinct from his body, breath, senses, and mind. He says that the mind and its mental processes prevent one from knowing the Absolute. When one learns not to identify himself with the thought forms or objects of the mind, he establishes himself in his essential nature. In the yogic process one must purify the unconscious mind and then go beyond the mire of delusion created by the unconscious and its samkaras to get to the fountainhead of light and life, the centre of consciousness within. That is the meaning of the third sutra.

The fourth sutra states that if one has not attained perfect control over the mind and its modifications, then he identifies himself with the thought waves and with the objects of the world and thus remains ignorant of his true nature. All pain and misery is the result of ignorance. When one removes that ignorance, and dispels the darkness, then he attains the state of equilibrium, which brings freedom from the bondage of karma and pain. One has to learn to be free, to become master of himself. That mastery is attained by practicing the yogic techniques taught in the aphorisms. Mind and its modifications can he perfectly analyzed and controlled, and then mind can be directed according to one’s aim in life.

The Yoga-sutras teach not just a philosophy but, most importantly, a specific method to practice. By studying them, a student can understand that he is fully equipped to attain samadhi, the highest slate of tranquility, the center of consciousness within the student acquires self-confidence by studying Patanjali’s sutras because the sutras say that the student can cultivate the power of concentration and use it to remove the obstacles to enlightenment, which cause all suffering.

Most people desire to enjoy the world, but for lack of inner strength and a one-pointed mind, they arc not able to do so. One has to acquire the knowledge of how to control the mind and its modifications through practice. Practice and commitment to a discipline come first. When the student starts practicing, he experiences something which is supramental, and such extraordinary experiences lead him to the deeper dimensions of life. One should establish himself firmly on his meditation seat and make the body steady and still on that seat, regularly every day at the same time. Steady posture, though a preliminary practice, is very important, for it helps the student in attaining the meditative state. Gradually one should increase the practice time, so he can remain still for a longer period. After one accomplishes this, then he will find that the breath is distracting the mind. Then one learns to breathe harmoniously. Soon one will think in a calm and serene way. In this way one can go beyond body, senses, and mind. One can go beyond the reservoir of the impressions and samskaras stored in the unconscious mind, and finally attain the center of consciousness. This is an inner journey which one can accomplish without movement. Here on this path, one has to be steady, to be regular, to be punctual, and gradually to work with the body, breath, and the conscious and unconscious mind. Then one can go beyond intellect to the center of consciousness.

This is called the path from the gross self to the subtlest Self. The moment one completely devotes himself with one-pointedness, he is at the center of consciousness. The student becomes one with the center of consciousness, as a drop of water or a river meets and he comes one with the ocean. Slowly the individual self, which is like a ripple in the vast ocean of bliss, becomes one and the same with the ocean. So the yoga sutras of Patanjali teach the student how to attain samadhi in this lifetime if he steadily practices and works to control the mind. Pandit Dr. Usharbudh Arya has written a commentary on the Yoga-sutras in a very scholarly manner. No doubt this commentary will be beneficial to researchers and to students who are eager to study the ancient commentaries of vyasa bhoja vachaspati and other commentators. Dr. Arya is both a scholar and an accomplished meditator. I have not come across any other commentary that explains the yoga-sutras in such a clear and brilliant manner. 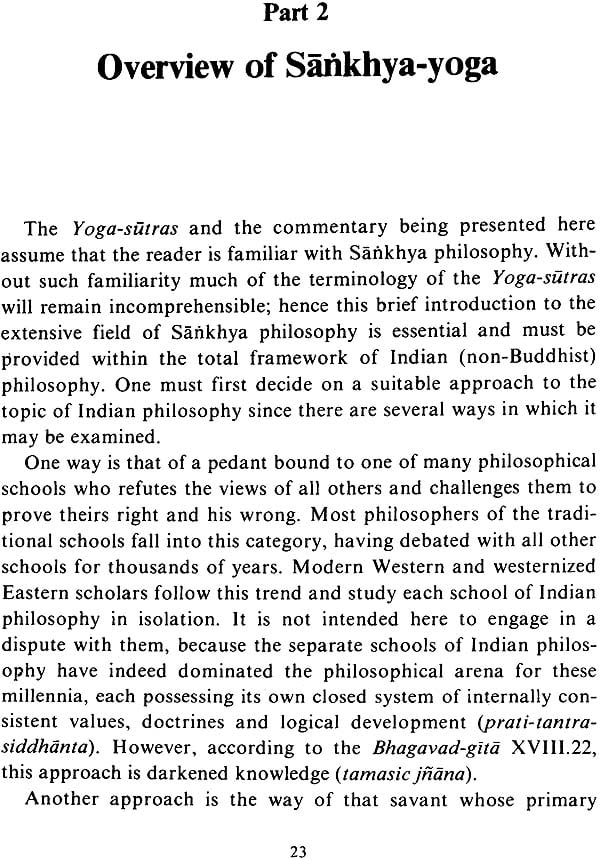 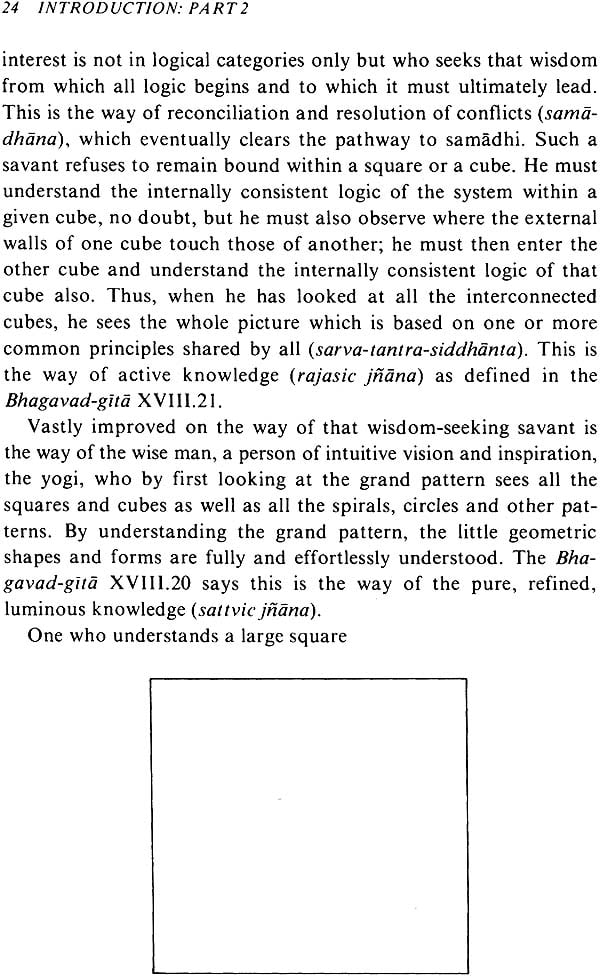 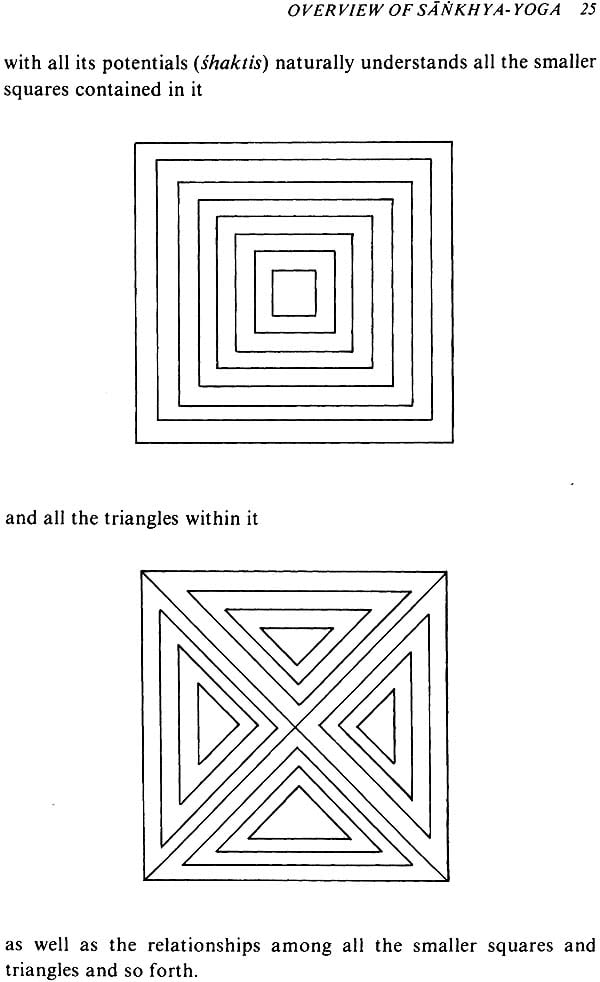 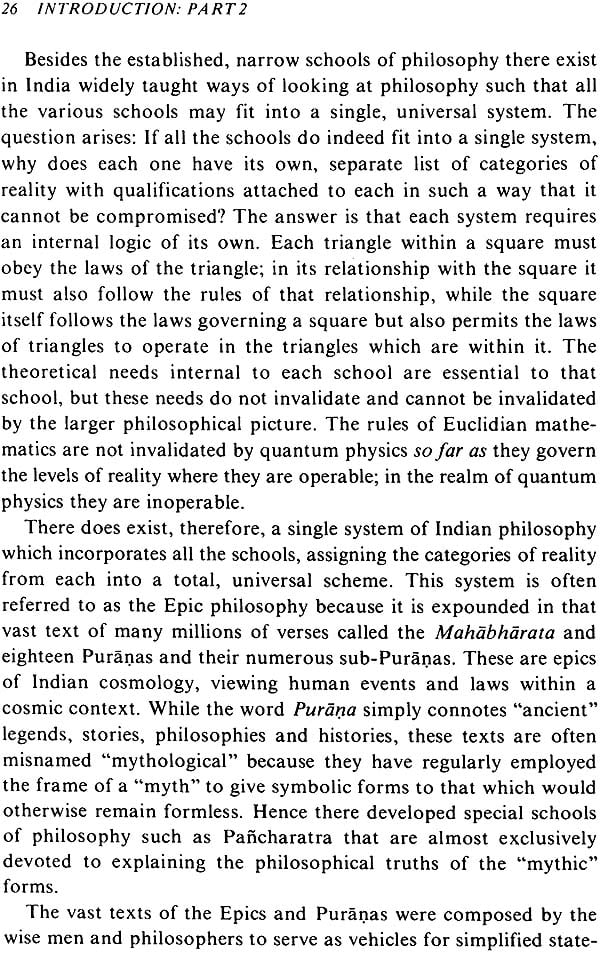 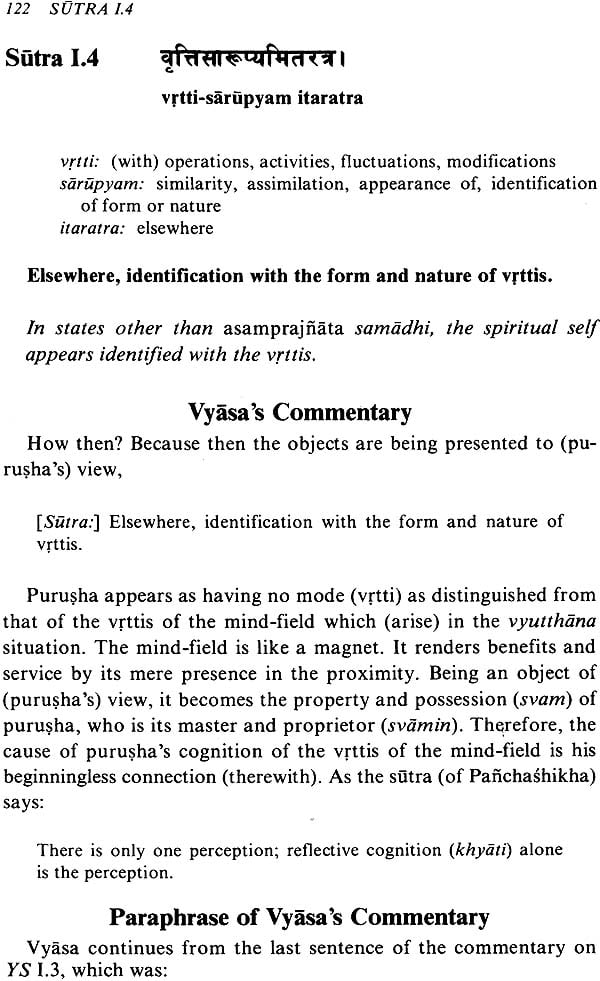 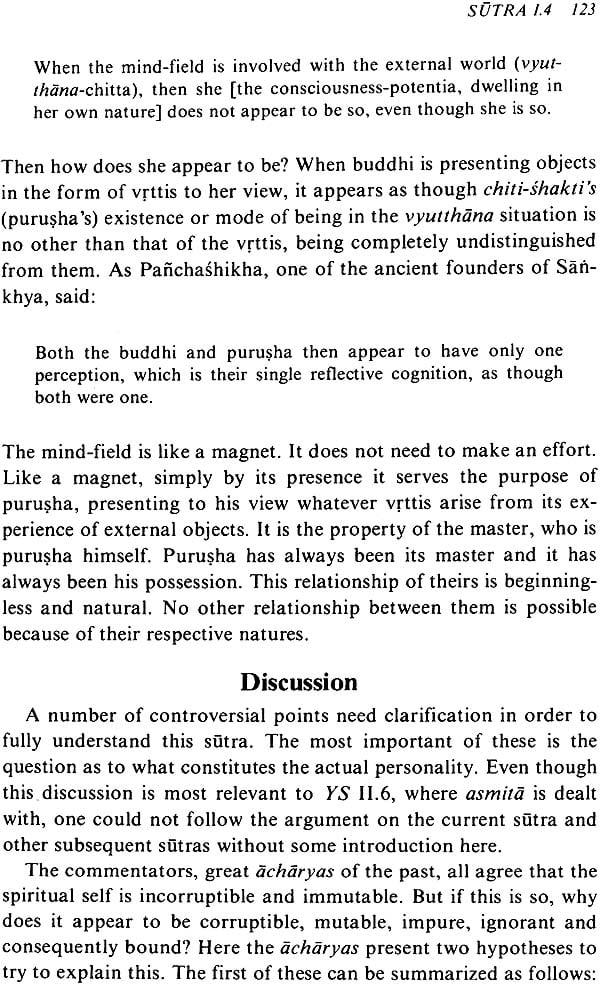 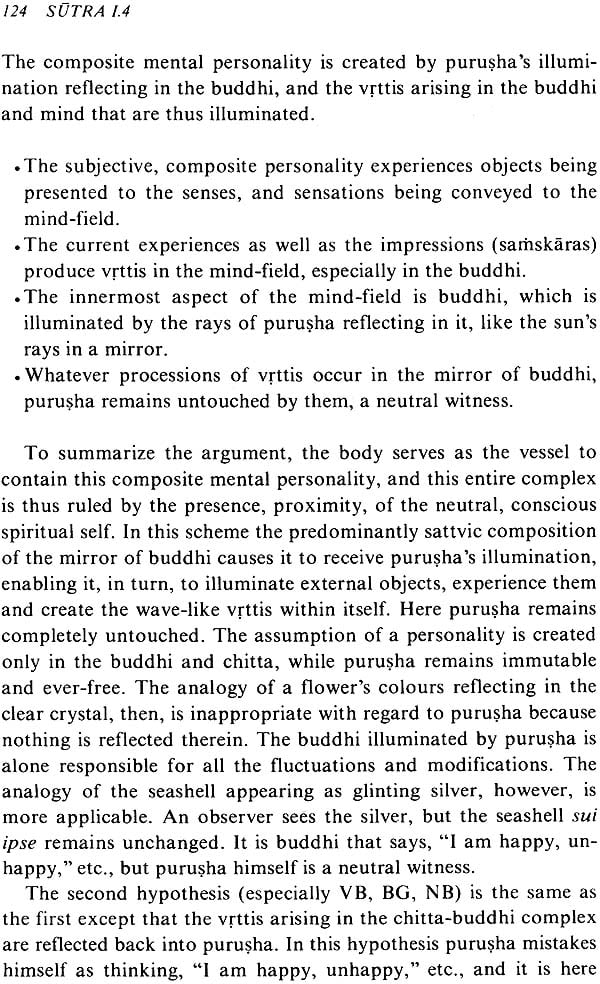 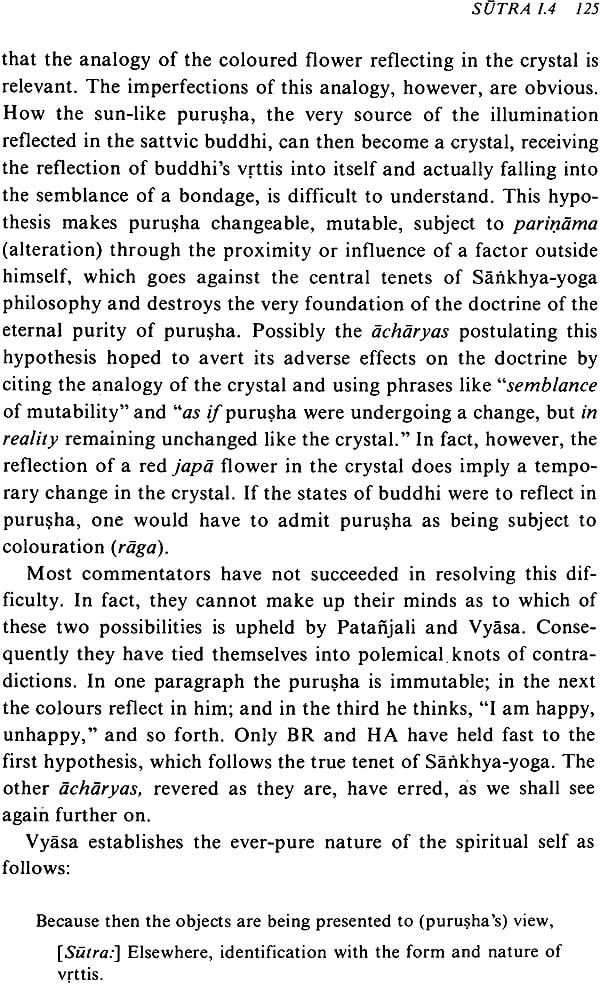 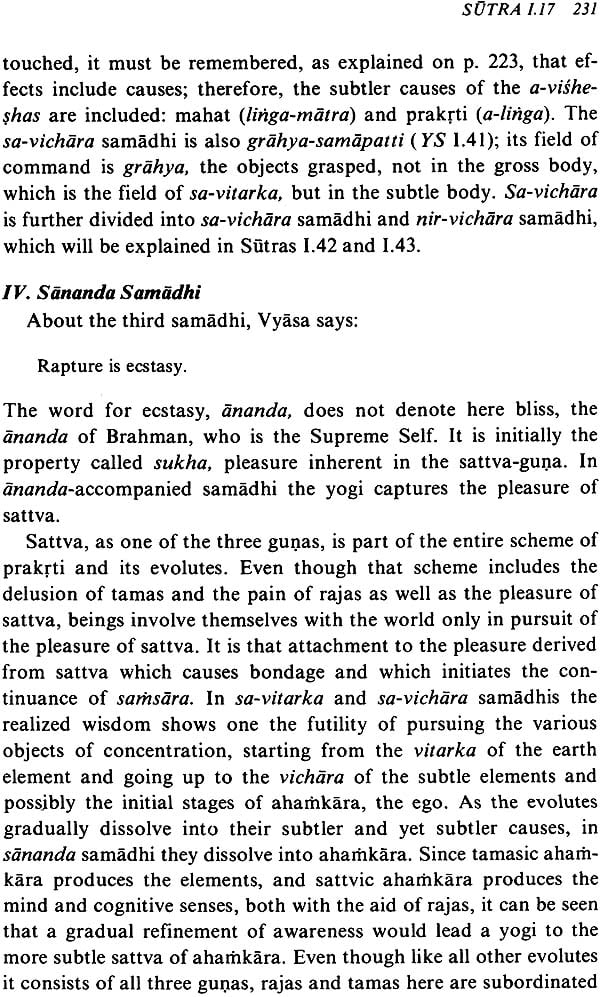 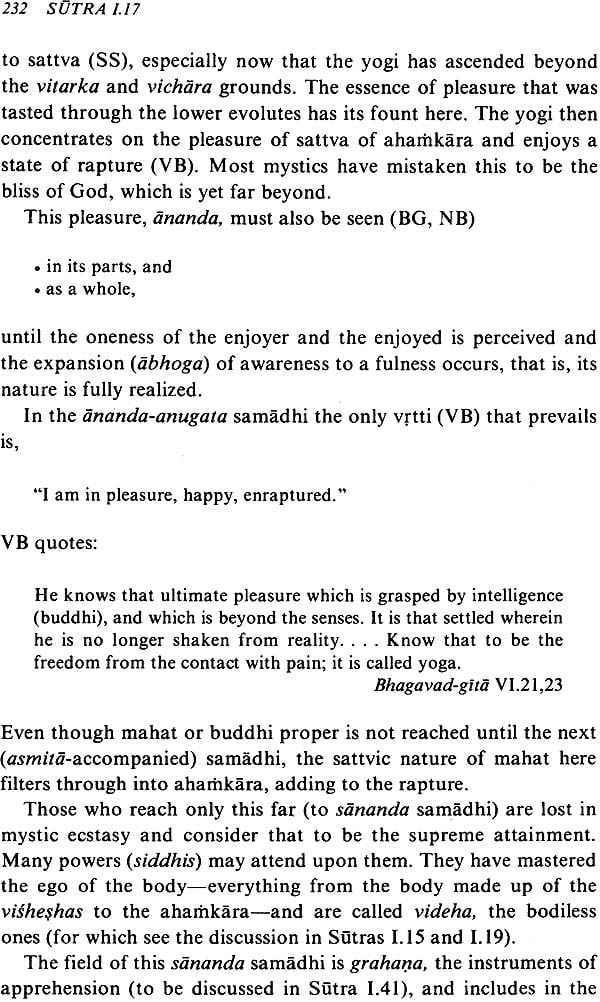 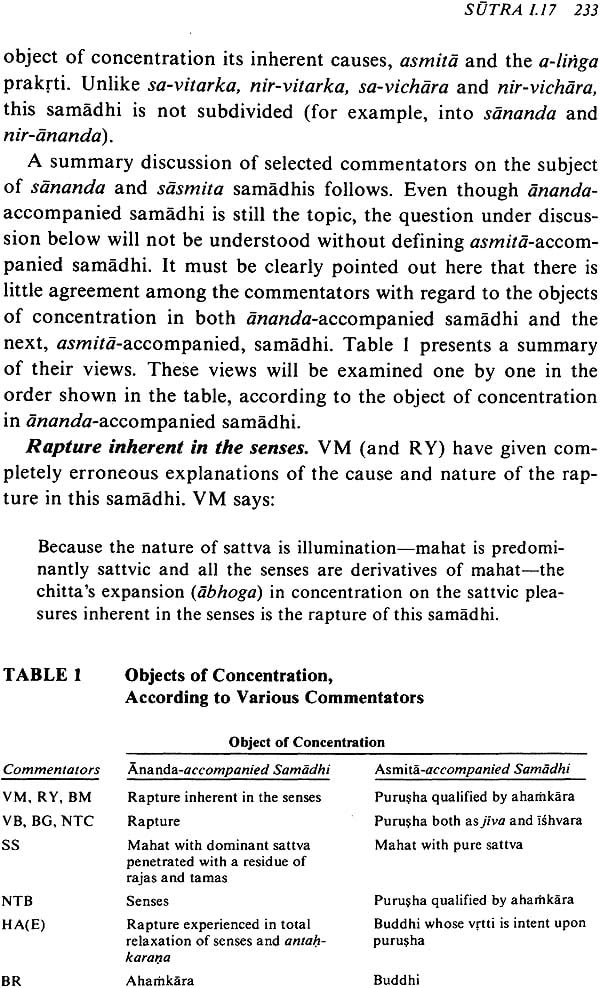 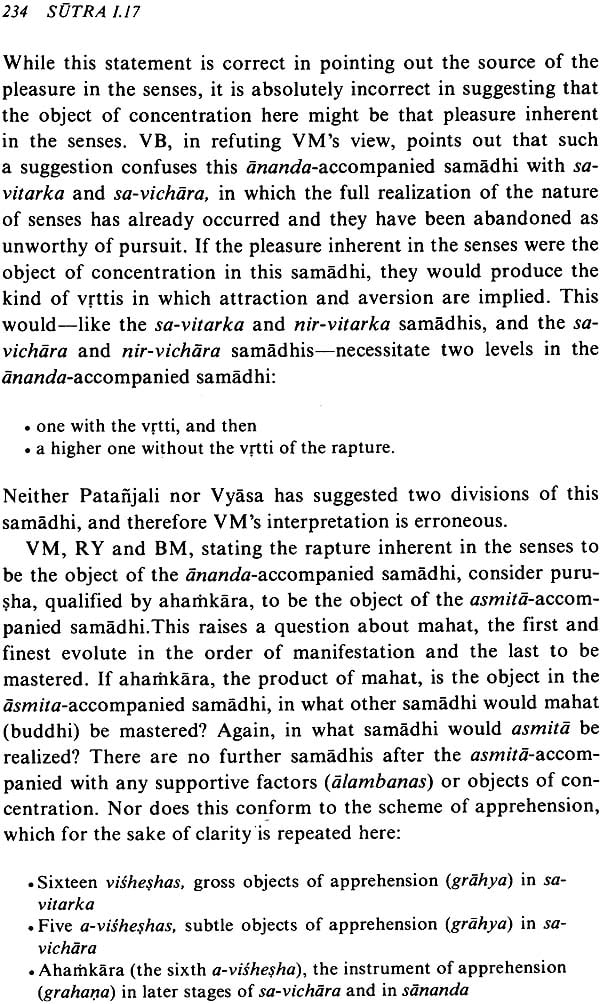 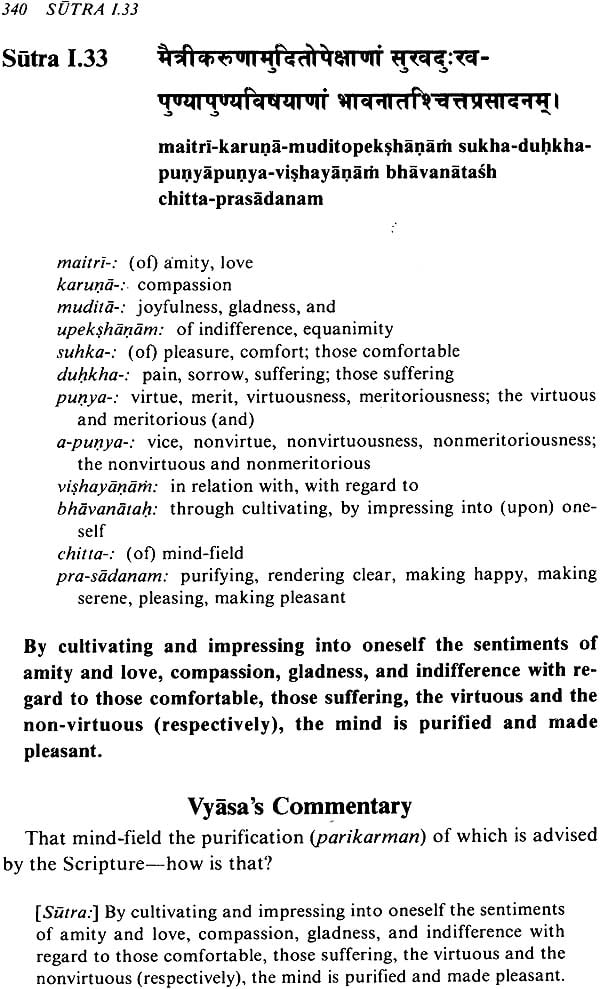 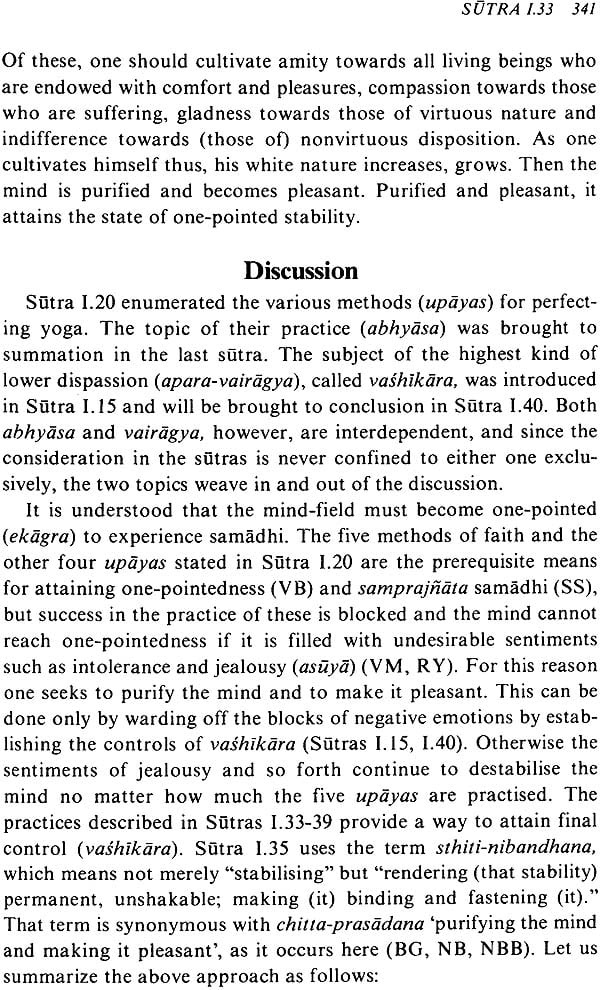 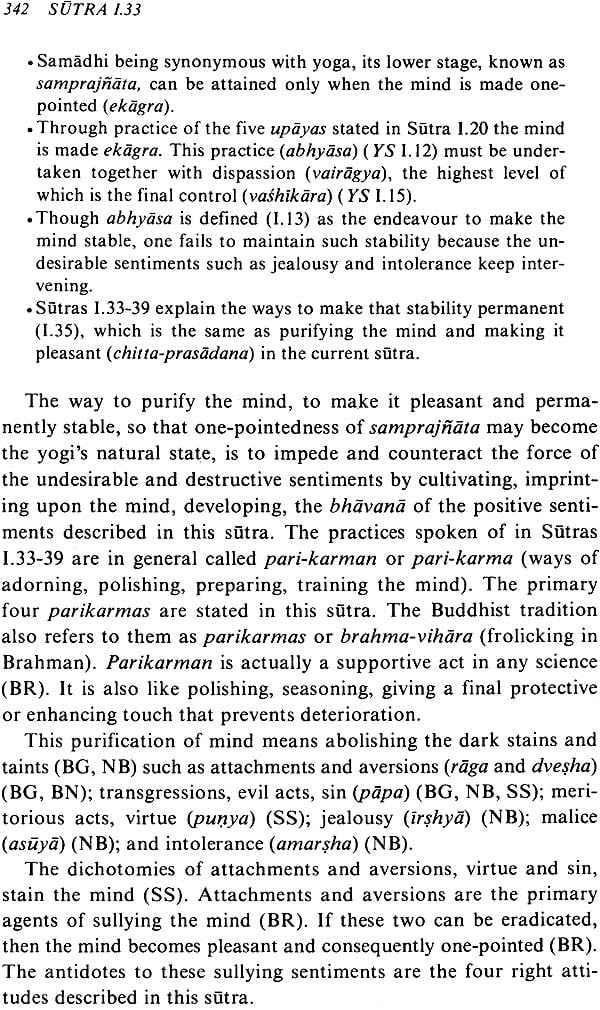 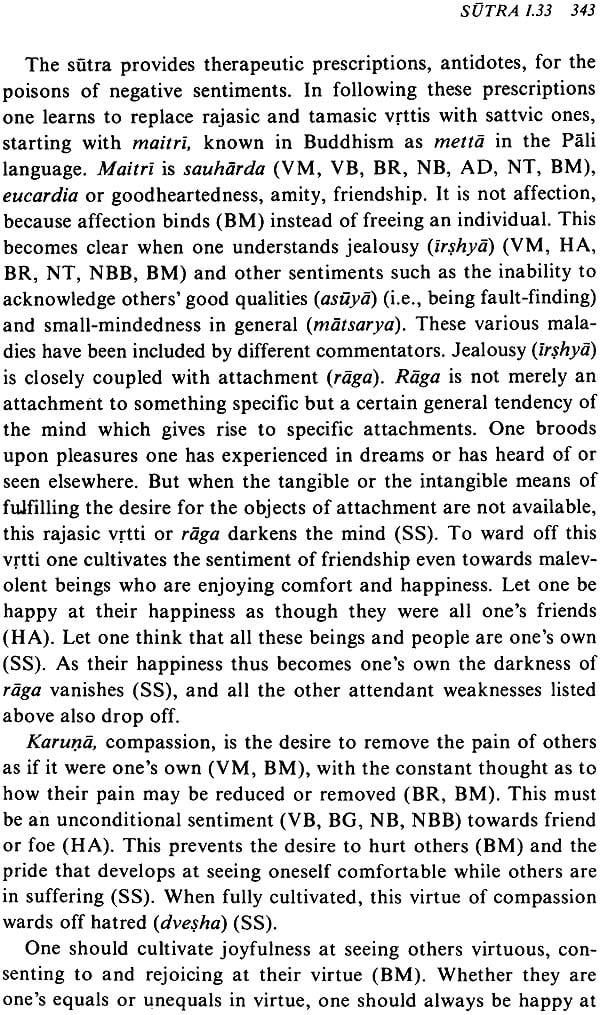