Best Seller
FREE Delivery
$24.50
Quantity
Ships in 1-3 days
Notify me when this item is available

The Yogas in Astrology for the first time explained in simple. Yet lucid language the method of analyzing the effects of various yogas that obtain in a horoscope. The logical and scientific approach of this book has appealed to the practitioner of astrology the world over. It is with some satisfaction that we present to the discerning student of astrology the third edition of this book. The book has been completely revised and the text modified at places where necessary. Vinay Aditya has rendered immense help in bringing out the present edition of this work.

Astrological texts abound in planetary combinations which are termed as the 'Yogas'. In fact, any specific planetary disposition capable of producing some specific result is labeled as a yoga. There are all sorts of yogas, from the most benevolent to the most malevolent ones. The problem with all these lies in their interpretation. The astrological texts use a strong language to describe the results of the various yogas. If such results are applied literally to the individual horoscopes, the predictions often go wrong.

The clue to accurate predictions lies in the right interpretation of the yogas. This consists of an elaborate process which each yoga needs to be subjected to. The Yogas in Astrology is primarily intended towards the achievement of this goal of the right technique of interpretation of the yogas. While numerous astrological yogas find mention in this text, the stress here is more on the technique of analysis than on the actual number of yogas discussed.

The approach to the understanding of various yogas as given here is innovative. Various factors that influence the results of a given yoga, e.g., the nature of individual planets, the signs and houses involved, the additional planetary influences outset. Emphasis has been laid on the interpretation of the Nabhasa yogas much before concentrating on any other yogas in the horoscope since the Nabhasa yogas govern the life pattern as well as the natural responses of a native. Several other yogas tend to operate within the broad guidelines of the Nabhasa yogas.

One chapter has been devoted to planetary conjunctions which so remarkably alter the otherwise simple results obtainable from a planet or a yoga. Another chapter deals with the Pancha Mahapurusha yogas which the astrologers generally tend to ignore.

The celebrated Gaja-Kesari yoga has been discussed in a very elaborate manner. This yoga provides a model example of the technique of interpretation of a yoga as well as the several factors that modify the described results of the yoga. All the various yogas discussed in the text in fact individually need a similar treatment.

A large section of the astrological yogas defies a compact classification. Several well-known and important yogas belong to this category. These have been treated in the chapter labeled as the Variegated Yogas.

The all important Raja yogas, Dhana yogas, Arishta yogas and Daridra yogas, as also a special category of yogas known as the Parivartana yogas, have been dealt with most thoroughly. Several illustrations have been provided to give clues to their understanding and interpretation.

Vedic astrology is nothing if not concerned with the spiritual aspect of life. A brief discussion of the Sanyasa yogas, or combinations for detachment and renunciation finds place in a separate chapter.

In the end, combinations pertaining to a native's longevity have been discussed. Some simple clues to the determination of longevity, and the possible death-inflicting dashas, have also been furnished.

The text is thoroughly illustrated with umpteen examples from actual horoscopic charts. Extensive use of vargas has been made in appropriate sections of the book. The results have been integrated with the Vimshottari dasha where relevant. An understanding of the book demands some basic knowledge of astrological technique and terminology which may be learnt from the 'Elements of Vedic Astrology' by the author. All along, the stress has been on avoiding a literal application of the results ascribed to the various yogas in the classical texts. On the other hand, an emphasis has been laid on analyzing each individual yoga in the light of sound, though basic, astrological principles which give indications about the nature and extent to which an individual yoga undergoes modifications.

Wherever possible, a scientific basis inherent in a given yoga has been furnished. It is hoped that this book helps improve the technique of analysis of a horoscopic chart and increase the percentage of successful predictions.

The Yogas in Astrology deals primarily with the technique of analysis and interpretation of the various astrological yogas according to the Parashari system.

The approach to analysis is based on the standard astrological principles which are so often ignored which dealing with this all important subject.

The role of the houses where the various yogas from, the signs involved, the other planetary influences on the yoga-forming planets, the strength and weakness of the constituent planets, their status in the vargas, and the operating dasha have all been elucidated with examples.

The Pancha-Mahapurusha yogas, the solar and the lunar yogas, and the important Dhana yogas, Raja yogas and Arishta yogas have all been treated exhaustively.

The generally ignored Nabhasa yogas have been classified in a unique manner and their significance in horoscopic analysis emphasized.

One chapter is devoted to the Sanyasa yogas.
The book is profusely illustrated with examples. 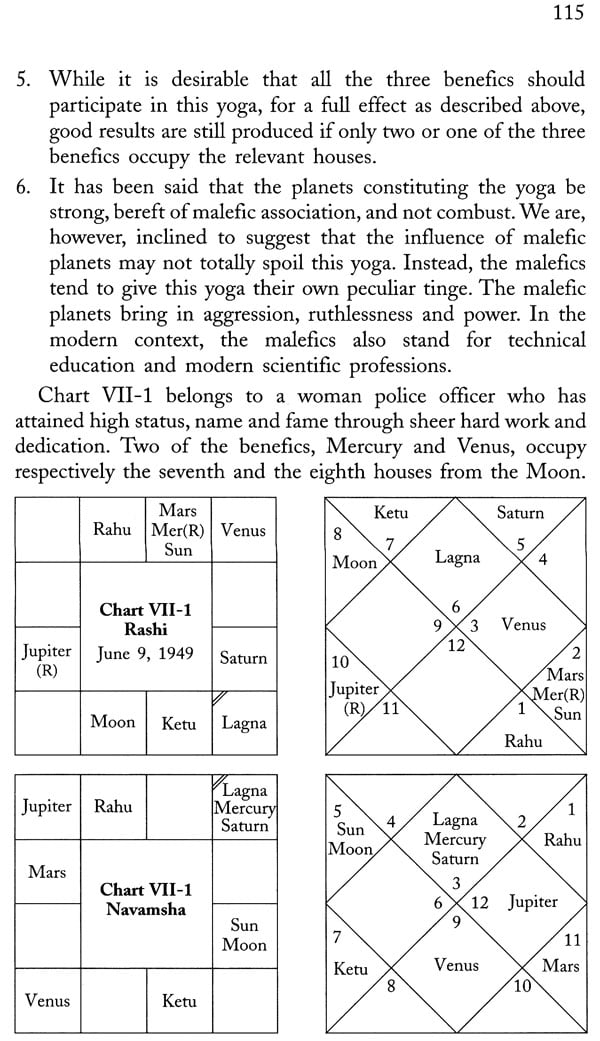