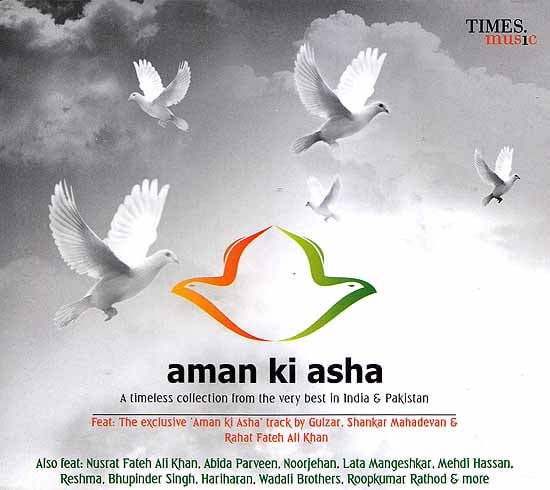 The two leading media houses of India and Pakistan (the Times Group and the Jang/Geo TV Group) have decided to come together to play their part in developing a stronger Second Track in the diplomatic and cultural relationship between the two neighbors. To this end we are planning to launch on January I. 2010. a compaign that seeks to look beyond the confines of a 60 year old political boundary to the primal bonds that tie together the peoples of the two countries.

Titled Aman Ki Asha. The campaign will not in any way trivialize the very real areas of difference that exist between the neighbours: it will just recognize that we can’t remain hostage of those differences forever and seek to add a new dimension to the relationship.

Aman Ki Asha is a beautiful album encompassing the spirit of music. Love. Trust, friendship and most importantly PEACE. TOI’s latest initiative for peace Aman Ki Asha. Takes Sufi music a step further. The project seeks to looks beyond the confines of a 60-year-old political boundary to the basic bonds that tie together the two nations and its people. It brings together for the first time some of the best sounds from across the two borders in hope of everlasting peace and friendship. The best part about this album is that for the first time renowned artistes from both India and Pakistan like Lata Mangeshkar. Gulzaar. Bhupinder Singh. Shankar Mahadevan. Rahat Fateh Ali Khan. Hariharan, Noor Jahan. Nusrat Fateh Ali Khan. Abida Parveen. Mehdi Hassan and many more will be featured together to create magic like never before. A timeless collection from the very best in India & Pakistan.