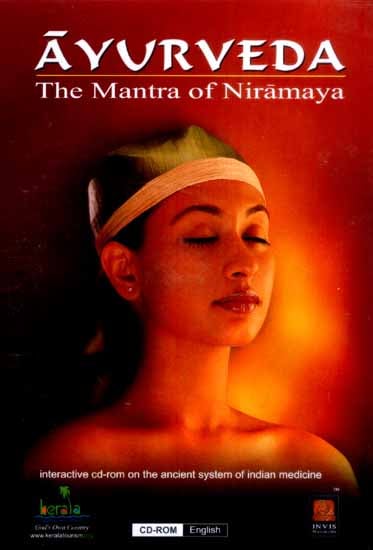 FREE Delivery
$40
Quantity
Ships in 1-3 days
Notify me when this item is available
About the CD-ROM
Content : This interactive CD-ROM is a Mini encyclopedia on Ayurveda Language : English

Ayurveda: The Mantra of Niramaya

AYURVEDA is the indigenous Indian Medical Science. In Sanskrit, Ayur means ‘pertaining to life’ and Veda, ‘science’ or ‘wisdom.’

The CD ROM developed by Invis Multimedia on Ayurveda enables one to get familiar with the basic principles of this ancient health care wisdom of India. Richly illustrated with murals, still photographs, animations and video clips this CD Rom is a virtual mini encyclopaedia of this system of medicine from India. The CD ROM features six sections namely History, Philosophy, Pharmacology, Body Mystique, Rejuvenation, and Frequently Asked Questions.

Ayurveda is believed to have originated as a ray of enlightenment in the cosmic consciousness of Brahma, the creator, at the time of creation. Brahma composed Ayurveda as a branch of Atharva Veda. Brahma who passed it on to Daksha Prajapati, who in turn to Ashwins and from them to Indra. It is believed that great seers of the earth deputed eminent sages Dhanwantari, Bharadwaja and Kashyapa to heaven to learn this from Indra. That is how Ayurveda descended from the skies to alleviate the suffering of humans.

These illustrious sages in turn had eminent pupils. Dhanwantari and his disciples specialized in Salyachikitsa (surgery) and formed the school of surgery. His most famous student is Sushtrutha. Punarvasu Arthreya who was the disciple of Bharadwaja had seven students. He and his students were known as Artreya School of physicians and specialized in Kayachikitsa (general medicine). Charaka was the most important disciple of Artreya. The Kashyapa School specialized in Kumarabhrutya (paediatrics). The foremost among Kashyapa’s students was Vruddha (the elder) Jeevaka.

The emergence of different schools of Sanskrit philosophy like Nyaya, Vaisheshika, Sankhya, Yoga, Vedanta and Mimamsa was another landmark in the history of Indian medicine. The principles expounded in these philosophies facilitated the development of Ayurveda. Based on humoral pathology, Ayurveda propounds that the human body is composed of tridoshas, the three humors-Vata, Pitta and Kapha. The disequilibrium of these humors causes ill health.