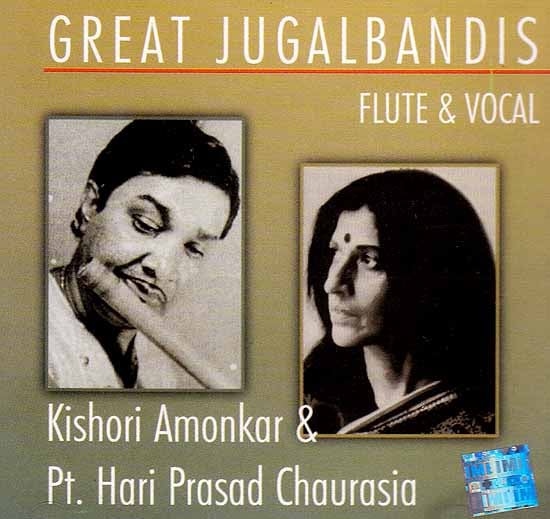 Kishori Amonkar is unquestionably the most versatile and popular woman vocalist of the present generation. Kishori’s is the kind of music that casts its magic spell over her listeners as few others can. Kishori Amonkar also enjoys the singular distinction as the first woman pioneer of the avant garde movement in Hindustani music. And that makes her a controversial exponent of the musical tradition of North India.

Daughter and disciple of the great Mogubai Kurdikar, the doyenne of the Atrauli – Jaipur gharana, it is natural that music to her is a maternal inheritance. But her genius has sought to overshadow the blue – blooded gharana, pioneered by her mother’s mentor, Ustad Alladiya Khan. Thereby, she has widened her horizons of musical expression and discovered “fresh fields and pastures new”, to the perennial delight and fulfillment of millions of her fans.

Hariprasad Chaurasia, a living legend in the realm of Indian Raga Sangeet, has earned the distinction of creating a special stylistic niche for an instrument which is almost a symbol of Indian mythology and heritage – the flute. To him goes the credit of introducing Dhrupad – ang alaapchari (improvisation on the raga independent of any composition) and gatkari (composition – based improvisation in the style of plucked – string instruments like the sitar an sarod) into the baaj (style) of classical flute, which has earlier been confined to the idiom of vocal music alone. This effort has spanned the areas of music motifs and ideation on one hand and instrumental technique on the other.

The qualities in Chaurasia’s music and technique which finally succeed in drawing those rapt listeners by the millions the world over, are an amalgam of a level of tunefulness which is spiritual in its effect, an intensity of feeling in the swara which is soul – stirring and a precision which can keep the listener’s mind in a state of perfect repose.

Chaurasia owes the depth of his perceptions into music to his gurus Smt. Annapurna Devi and earlier Pt. Rajaram and Pt. Bholanath.

A unique facet of hariprasad Chaurasia’s evolution as a musician has been his singular ability to delve into a rich variety of genres, forms and styles from music to film and contemporary music.

The Jugalbandi it is known today is not a traditional performance style in Indian Music. Jugal – gaan was an occasional occurrence where two students of the same guru would come together to present a joint concert where the ideations would inevitably be highly concomitant between the performers. At the other extreme was the concept of a musical duel, where the elements of challenge, one-upmanship and competition were basic.

The modern – day Jugalbandi is a beautiful idea which is born out of mutual respect and rapport between two independent artistes. Thus the coming together of two titans on one stage, often without preparation, becomes a rare occasion to see how two contrasting style merge with each other. The concept remains a tribute to the solidity of the canons of Indian Classical music which enables two virtual strangers to converse with such unerring precision and brilliance.

While Jugalbandis between instrumentalists have been popular for decades, the vocal – instrumental Jugalbandi is a novelty. Thus the meeting of Kishori Amonkar and Hariprasad Chaurasia in a Jugalbandi acquires a special significance. The artistes come from diverse backgrounds. Yet the synergy in ethos is striking.

The magnetic command over sur, the dhrupad –ang phrasing, the rippling tans and above all, the intense level of feeling are common to both these great luminaries. They present the raga Bhoop, commencing with an unconventional free – style alapa in akara, moving on to a vilambit khayal, a drut khayal and finally a tarana.