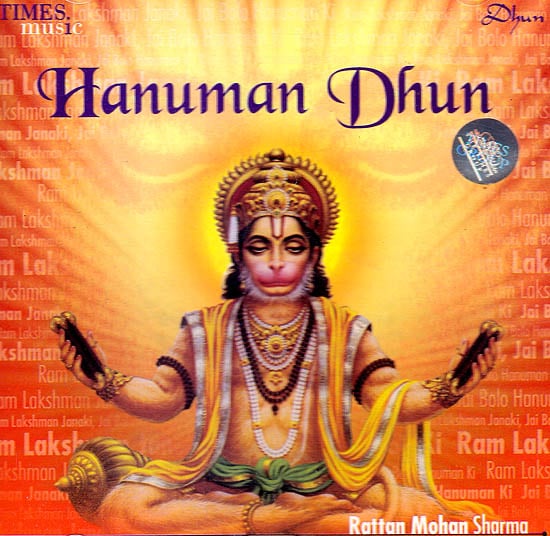 The lord blesses him who reverses Hanuman with an unflinching faith love respect and humility with success in all his endeavors! He who mediates on his name with faith and devotion and with his image in his heart, finds all his noble efforts crowned with success by the grace of Hanuman.

Conqueror of the wind Destroyer of all miseries and a symbol of auspiciousness, Hanuman it is said came to this earth to assist Lord Ram in his battle against Ravana. Recognizing Godhead beneath the human disguise, Hanuman consecrated himself completely to the service of Ram. He is often Depicted in a kneeling position of utter devotion and humility thus symbolizing the strength and purity of the perfect Subordinate.

Hanuman Dhun is a tribute to this great Vedic ascetic known for his selflessness. A repetition of the chant Ram Lakshman Janaki Jai Bolo Hanuman ki is a simple yet powerful prayer set to music by Shri Rattan Mohan Sharma. So immerse yourself in devotion for to worship Hanuman is to worship the Supreme Lord Himself!.

Rattan Mohan Sharma a disciple of Pandit Jasraj is a protégé of the illustrious Mewati Gharana whose stalwarts include his late grandfather, Pandit Motiramji and his uncles Mahamopadhyaya Pandit Maniramji, Sangeetacharya Pandit Pratapnaryanji and Sangeet Martand Pandit Jasrajji.

One of his releases through Times Music has been the recitation of the Gayatri Mantra which has been the most successful audio releases in recent times.

An a grade artiste of all India Radio, Rattan has been the recipient of the prestigious Shankarrao Vyas award for his topping grades in the Sangeet visharad Examinations conducted by the Gandharva Mahavidyalaya. Other awards won by him include. The Sangeet Martand Pandit Jasraj Rotating Trophy awarded by the Rotary Club of Mumbai shivaji Park, the Mewati Gharana Gaurav Puraskar and Sur Ratna Award of the Bhatkande Lalit Kala Shikshan Samiti, Raipur.

Evoke Lord Hanuman with Hanuman Dhun, a musical rendition of the Mantra, “Ram Lakshman Janaki, Jai Bolo Hanuman ki” Known to Shower devotees with divine blessings it is the simplest way to connect with the lord.