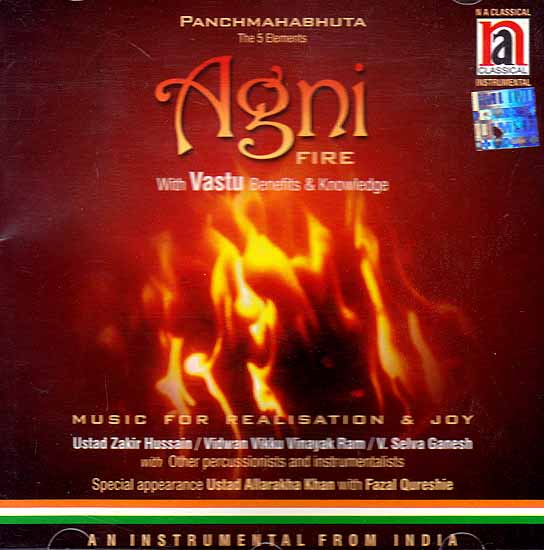 An Instrumental From India.

Fire or Agni is another of India Panchabhuta Again it has eternal and perishable elements. The essential character of fire is to generate heat. According to Hindu Mythology Agni is one of the eight guardians who guards our universe and is known as Asta-dik-palakas (Asta-eight, Dik Zone, Palaka – Guardian). The fire is posited in the south east of the Universe. However in Indian mythology there are mentions of various types of fires. The four important ones are fire of the earth fire of the sky fire of the stomach and the fire we commonly use.

Fire is neither energy nor matter or present in all the objects as early scientists believed if was it is there in the form of electrons orbiting the protons and the neutrons that make up all that we know of. Although moths and other animals are attracted to fire only humans know how to use it. Much of our civilization has developed from our application of fire to transform things we boil water cook food, bake clay, melt iron, burn wood into charcoal etc. Human beings initially knew fire primarily as a means of destruction. When we learned to control fire and harness its energy our civilization began to make rapid advances. It is the element of strength force of faith and the power of protection. It is the source of heat and light in our lives strength because of its somewhat chaotic and erratic nature. Fire leads us tot eh purification of our self and of nature. It is the inescapable force that draws us into personal and planetary evolution activation the life force. The vitality of animals and humans has been described as internal fire because the mitochondria in our cells derive energy by burning food in the presence of oxygen indeed out body become cool after the flame of life dies out. No name is eternal but he phenomenon of fire reappears again and whenever conditions are right for it. Sun is a formation of gas which burns & Create Agni & Heat. Sun is the most vital source of energy and light it is the soul universe formation of day & night charge in seasons is brought about by the movement of sun in relation to the movement of earth. Fire element is related to our sense of sound touch and sight. It is difficult to imagine life on earth without sun. The sun rays can be split into 7 plus 2 colors, beginning form the very beneficial ultra violet, indigo, blue, green, yellow, orange and red (VIBGYOR) and intra red in south east. Violet and cold colors of the spectrum have a beneficial and soothing effect on the body and hence it is recommended to keep open space in the North-East. When these rays combine with water they get additional benefits it is therefore recommended to have a water source in North-East direction. To block North-East by building a toilet there is depriving yourself of most beneficial rays of sun and has adverse results. The ultra-violet rays normalize the metabolism of the body. The supreme wisdom of our sages is reflected in the ancient ritual of urty Namaskar wherein the beneficial rays of sun become more potent when seen through fresh water offered to sun god. The late afternoon and evening sun with the harmful infrared rays should be avoided. It is recommended by Vastu to have tall and big trees in the south so that harmful rays of sun are blocked. In case light is needed from afternoon or evening sun make sure it is diffused. Fire is the element that is arguably more unique than any other for it is not as tangible as any other except space. The direction of fire is South East. The Kitchen, fireplace geysers etc. should be places only in this direction. Alternatively these can be placed in North-West because it is at 180 degree to South East. It is recommended by Vastu to have tall and big trees in the south so that harmful rays of sun are blocked in case light is needed form afternoon or evening sun make sure it is diffused.

Other than five elements there are some other elements, like time (Kala) and space soul and mind, like ether time and space are eternal. Time or kala is common course of all actions of all the elements and is eternal link of predetermined actions and happenings. Thus in Hindu astrology the whole world and its course are equated with time the direction or dik are part of space and North, South West and East are eternal no matter the universe undergoes whatever changes. Then the other element is soul which is related with the knowledge system of man as jivatman and the eternal knowledge of god or Paramtman (omnipotent). The last of the nine main elements is the manas or mind. It’s the sense organ or path to experience the world eternally and otherwise. These sense organs are in the shape of eternal paramanu or alom and works is combinations to derive pleasure at worldly levels. These are the brief our line of all elements. This was described in the Devigita very elaborately Devigita proclaims were born our of the primordial principle of unmanifested Shakti. The ether through which sound traverse was first element which is also known as Sabda-rupa. Second was Air or Vayu the Air of element came. The gandharupa or the source of smell came the earth.

The whole universe is made up of five basic elements, the earth, water, fire, air and space. Our body is also made up of these five basic elements. The pancha mahabhootas are related to our five senses of smell, taste, hearing, touch and sight. This knowledge co-ordinates five elements of our body with the five elements of nature along with natural forces. So that we take advantage and benefit from nature and environment in our daily activities and live or work with convenience and safety. Therefore this knowledge is very activities & Profitable for us and help in our daily activities. Each work has its nature and features, aforesaid knowledge gives us which is the appropriate direction for a desire work where and how to construct a room outer structure and interior arrangement of rooms according to the nature of work so that we do our work without any problem handedness. Any imbalance in our external and internal Vastu translates into unhappy situations. Vastu teaches the individual to live in balance and harmony with the panchamahabhootas. This knowledge tells us about the nature and work of directions and what kind directions at where it is medium normal and average and which direction is prohibited for concerned work. Vaastrushastra tells us about the problems which comes in human life like physical problem metal agony, downfall in business and other routine problem of the nature and environment and also suggests such kind of problem by remedial Vastu knowledge so it evidentially proved Vastu knowledge is very useful and profitable for human life and by this knowledge we get maximum benefits from nature and environment as well as we live or works with safety and convenience.

It is believed that fire was first created by striking two stones against each other. This fire that has been a part of existence since the Stone Age has the capacity to give life. Its presence can be seen innature on earth & in human body we start our musical journey with the fire that lives in the nature surrounding us. The music of the fire dancing through massive jungles is brought to life through music. The bliss emerging from Vedic sites that use fire to signify the happiness the lives in every house is presented through the various instruments like the Ghatan & the Tabla. The dignity of the element fire is upheld by presenting its saga in the classical music tradition.