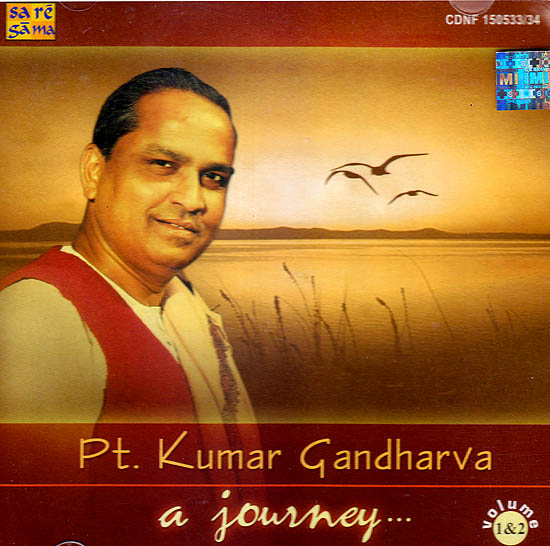 The journey series of Saregama HMV aims at keeping historic recorded of the celebrity Artistes journey from the beginning as a novice to reaching the point of being a role model to be emulated by the beginners. It has been the tradition that the celebrities have done their beginning with us. We are a part of their journey their best performances are with us. We present a compilation of some of them under this series. The Legends presented in this series are Pt. Shivkumar Sharma Ustad Zakir Hussain Pt. Bhimsen Joshi, Ustad, Vilayat Khan and Smt. Kishotri Amonkar.

Pt. Kumar Gandharva was born on 8 April 1924 in Sulebhavi village of Belgaum district then in Mumbai now in Karnataka, his father Shri Siddharam Swami was his early guru. His participation in a music conference at Allahabad in 1935 brought him into limelight from 1936 he came under patronage of Dr. B.R. Deodhar.

Pt. Kumar Gandharva transformed Gwalior Gayakee and took it to new heights he paid attention to the Swara in the Context of a Raga and also recognized the independent entity of an absolute Swara. He always gave importance to the contents of the text sung. He excelled himself in Khayals Nirguni Bhajans and folk Songs. He had contributed many Ragas to the Hindustani classical music. He had been honored with Padma Vibushan. He left this planet on 12th January 1992. Panditji gave new dimension to the traditional Ragas created new Dhun Ugam Ragas and brought out the Nirguni color of Bhajans. We have taken a note of all these major stations in his musical journey.

We have chosen for this album traditional evening to night Ragas Puriya Dhanashri, Chaiti Bhoop, Bahar, Sawani and Sohni Bhatiyar. To mark the exemplary creative genius of Kumarji we have selected three Dhun-Ugam Ragas Malavati Lagan Gandhar and Saheli Todi. The Nirguni Bhajans complied for this album have been a part of the cultural treasure of India over the last four decades.

A journey becomes a thrill if one gets a companion therein in one of the Bhajans his disciple and wife Smt. Vasundhara Komkali has joined him as a co-singer. After him also she continues to bear the torch for those who wish to follow kumarji’s footsteps for the continuity of Journey. We Saregama HMV are happy to be a co-traveler of the Musical Journey of a wonderful artiste.