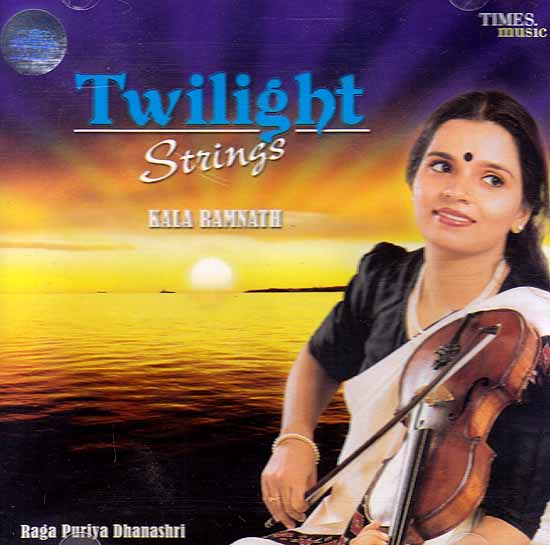 Puriya Dhanashri is an evening raga in the pooryi Thaat. According to Vishnu Narayan Bhatkhande (1860-1936) one of the most influential North Indian musicologists in the early twentieth century each one of the traditional ragas is based on or is a variation of ten basic thaats or musical scales which act as framework.

Kala Begins her recital with a short alap slow introspective improvisation outlining the key melodic phrases of the raga and essentially capturing its unique mood.

The bada khayal Dhoondana Jaun is a creation of Manarang one of India’s greatest and most enigmatic eighteenth century composers famous for his khayal and dadras written in the style of dhrupad. The composition is set to Vilambit ektaal a rhythmic cycle of twelve beats played in a slow measured tempo. This pace is deliberately chosed to allow the soloist maximum space to explore fully the raga in the khayal style of elaboration. The lyric of the khayal reflects the playful nature of Lord Krishna.

‘Oh! Where do I look for you Krishna where are you hiding? The one with the crown on his head with ear rings the flute in his hand Manarang (the composer) is going round in circles looking for him.

The playfulness of the lyric is skillfully in the music as the rectal unfolds. The vocal composition is eloquently adapted onto violin with charm and fluency and those familiar with the composition will have the lyrics echoing in their mind as they listen.

Hiding behind that resides a face that looks like the moon.

In the second half or antara the fair maidem’s beauty is compared to the moon and the composer Manarang requests her to speak saying if you could look so beautiful then words uttered from your lips must also sound beautiful.

Puriya Dhanashri is concluded with a lively tarana composition which gives a suitable platform for kala’s stunning rhythmic vocal style which employs tabla and pakhawaj syllables like dhere dhere tun and terekete for words.

Hori is a light classical composition form associated with holi the festival of colors set to Raga Khamaj and a brisk tempo six beat dadra rhythm the mischievous Krishna is requested by his gopis (female followers) not to throw or spray colors on them during the festival.

Set to a slower Dadra the concluding Bhairavi composition is also based on a song about Lord Krishna.

Bhairavi is an auspicious raga traditionally played at the end of a redital. This time Krishna is referred to as a thief who has stolen a maiden’s heart. The maiden claims that Krishna stops her on her way teases her and twists her arm all without her consent.

The second stanza of krishna’s beauty and how he taken hold of her heart with his teatues embedded as a picture in her heart.

After meeting him she had lost her heart to him and was now along all again without her consent.

Kala Ramnath is one of the most gifted violinists in the world today. Her immaculate bowing technique meticulous intonation and clarity of tone are the envy of many principal western violin soloists.

Having played a key role in popularizing the instrument in North Indian classical music Kala has in recent years been busy mesmerizing audiences worldwide with her spellbinding recitals. Her startling virtuosity and technical expertise is balanced by rare the depth of emotional intensity always present in her music.

Remarkably this is a one take recording without any studio edition no post process filtering or any electronic spatial improvements in the recording or mastering process something rarely achieved in modern day studio recording. It captures two of India’s most outstanding talents in a spontancous and uninterrupted flow of creative music making.

Kala Ramnath halls from a dynasty of musicians stretching over seven generations, She is the fourth generation violin remarkable players including such luminaries as Prof. T.N. Krishnan and Dr. N. Rajam form whom Kala received formative training.

Kala began her musical journey in 1969 at the age of just two. It was her grandfather A. Narayana Iyer who first nurtured her talents, initially introducing her to both Hindustani and carnatic music.

Violin has been established is the South Indian Carnatic music style since it was first introduced by Baluswami Dikshitar in the seventeenth century though mostly as an accompaniment to vocal music.

For more than a decade Kala’s musical skills have been matured and refined by the legendary vocalist Pandit Jasraj who has introduced her to the intricacies of the Mewali gharana vocal style.

I would like to acknowledge two of the finest artiste to emerge on the performing stage of Indian classical music Kala Ramnath and Yogesh Samsi. Both of these artists have literally grown up in front of me and so it is especially satisfying to see their incredible success in this very difficult tradition at such a young age. This recording is a great representation of the teachings of their Gurus. I wish them all success in their musical future with blessings.