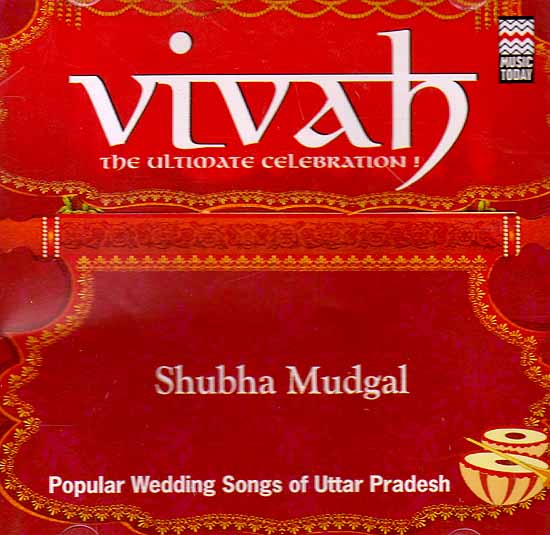 $28
Quantity
Notify me when this item is available
From the CD :

A wedding is a ceremony that celebrates the union of two people & celebrates the coming together of traditions, customs, cultures, religion and all other social bonds. This album features collection of popular wedding songs of Uttar Pradesh, composed by the famous vocalist Shubha Mudgal. She has also given vocals along with other singers. It features songs on the wedding function from pre-celebration starting with the notes of the shehnai as a mark of the auspicious beginning, a mood that carries through the Mangal Dhwani till the moving and intense saptapadi describing the very moments of bidai, thus expressing the distinct moods & emotions of a wedding.

Out of all the sanskaar’s, the landmark occasions that mark the human passage from birth to death, one of the most significant is marriage. It is an occasion for celebration, dance and song. The wedding songs of Uttar Pradesh, born of the folk songs of the great gangetic plain, are typical of its composite culture, a complex tapestry woven together from many strands. Different religious communities share common rituals and ceremonies- the mehndi, the sehra and the poignant bidai. The very terms for the groom and the bride, Banna and Banni are part of the Mughal heritage, now household words across northern India and an inseparable part of the repertoire of U.P. dialects such as Braj, Avadhi and Khari Boli. The emotions they describe are part of the human experience. And yet, underlying the joy and celebrations, there is more than a hint of sadness, the pain of separation from the beloved ones.

This album presents popular U.P. wedding songs, starting with the notes of the shehnai as a mark of the auspicious beginning, a mood that carries through the ‘Mangal Dhwani’ till the moving and intense ‘Saptapadi’ describing the very moments of bidai.