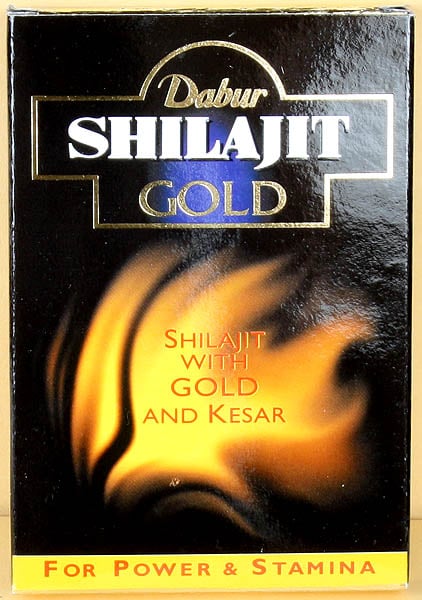 $17
Quantity
Ships in 1-3 days
Notify me when this item is available
Shilajit Gold Capsules (Shilajit with Gold And Kesar)
Net.10 Capsules

Ayurveda has the answer to such problems and has spelt out herbs and minerals, which can help provide a solution. Our ancient history is also loaded with examples wherein Rishis, Munis and Maharajas have used such herbs and minerals mentioned in Ayurvedic texts to improve sexual potency and thereafter having lived a healthy sexual life. Vatsayayan’s Kamasutra and the carvings of Khajuraho are living examples of the sexual revolution/glory prevalent during those times.

Shilajit Gold is an embodiment of the knowledge of Ayurveda for enhancing sexual health. It is a unique combination of Shilajit, Gold, Kesar an other important herbs. It is a powerful sex stimulant, which improves sexual health and acts as a rejuvenator in increasing stamina, vigour and vitality.

The main ingredients of Shilajit Gold and their actions are as follows:
Shilajit: It is a form of mineral that drips from the cracks of the rocks in Himalayas during hot weather. These steep rocks of Himalayas warmed by ages of bright sunshine and mated with plant matter for thousands of years exude Shilajit, which is rich in medicinal powers. The Shilajit used in Shilajit Gold is purified by Dabur to increase its potency. Shilajit is very rich in minerals, which are as important as proteins, carbohydrates and fats for our body. Shilajit brings about balanced and harmonious health in all users young & old. It acts as a restorative tonic, slowing down wear and tear of body tissues, which in turn delays ageing.

Ancient Ayurvedic physicians used Shilajit to treat various diseases. They have also used it for increasing the vigour and vitality. There is also extensive mention of Shilajit as a powerful aphrodisiac and restorer of youthfulness in “Kama Sutra” – the most widely read treatise on sex.

Gold or Swarna Bhasma : It is a known “rasayan” or rejuvenator in Ayurvedic medicine. It is mentioned in Ayurvedic textbooks for use as a general tonic, aphrodisiac, nervine stimulant and also promotes longevity. It increases strength, improves sexual vigour and vitality. Gold acts as a rejuvenator when taken with butter or ghee or cream of milk & acts as a potent aphrodisiac when taken with milk & sugar.

Alkushi or Kaunch Beej: It possesses aphrodisiac property. The extract of seeds is helpful in spermatorrhea and improves sexual health.

Sfed Mushali: It is a well – known sexual nutritive tonic and is often given with milk along with other ingredients in cases of seminal weakness and impotence.

Dabur Shilajit Gold is a perfect prescription for complete rejuvenation, vigour and vitality.

Dabur Shilajit Gold is a well balanced blend of herbs and minerals known for providing energy and stamina. Shilajit Gold is extremely effective in general weakness and stress and its regular use would provide continued stamina, vigour and vitality.

Approved colour used in the capsule shell.
Dose : One to two capsules twice a day, preferably with milk.