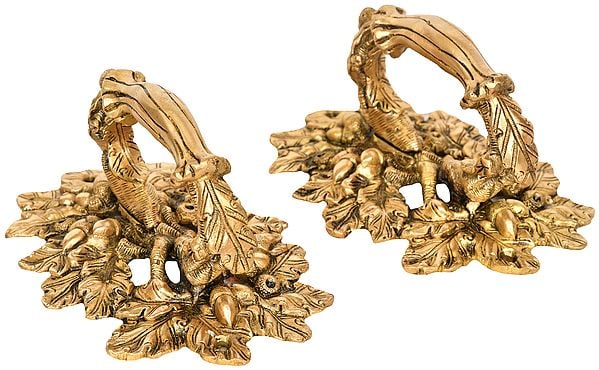 Best Seller
FREE Delivery
$110
Leaves have many types and are of immense importance in Hinduism. One of the types is betel leaf, which is a symbol of prosperity, being a magical ingredient of Ayurveda and an important part of religious customs and traditions. The refreshing and evergreen creeper, commonly known as Paan Patta, holds a special place in Hindu tradition. Another leaf type that is basil or Tulsi, is considered a sacred plant in Hindu belief, who regard it as an earthly manifestation of the goddess Tulsi; she is regarded as the avatar of Lakshmi, and thus the consort of the god Vishnu. Traditionally, it is planted in the center of the central courtyard of the Hindu houses as a symbol of good luck.

Goodluck and charm overflows as an amazingly carved door knob is emblazoned with a splendidly sculpted holy leaf, deemed as a protector and saviour for the Hindus. The eye-catching artistry has no match as even the fine wrinkles on the leaf surface are paid attention to, thus, stealing the heart of the onlooker with the fantasticly skillful art and the golden color that inches over it with extreme delicacy.

Along with these, there is another type of leaves, that is mango-tree leaves, that are placed on the water pot (kalask) before rituals to complete a Hindu ceremony called Purnakumba. They symbolise the limbs of the god, along with a single coconut that represents the head and are also said to signify goddess Lakshmi, thus, known to keep out negative energy. In Hindi culture, Neem is also manifested as the Goddess Durga, also known as Parvati. In some parts of India, the neem tree itself is thought to be a goddess, Neemari Devi. Its flowers, leaves and even smoke, is often used to ward off evil spirits, therefore protecting and strengthening Hindus.