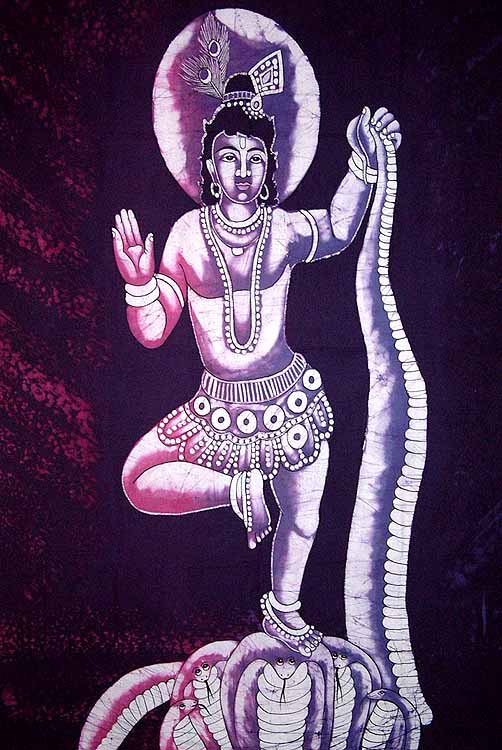 $35
Quantity
Notify me when this item is available

Fair trade
Krishna is one of the most complex personalities in the Hindu pantheon. He is a Machiavellian statesman as well as a philosopher par excellence in the Mahabharata. In the Bhagawat Purana, he is the cowherd god, at once a child hero and a slayer of demons and the romantic shepherd boy who charms the milkmaids of Braj with his sexuality as well as song and dance.

On the fanned out multiple hoods of a serpent dances Krishna. Here, he is depicted as a naked child, adorned only with ornaments, as small children often are in Indian villages. In one hand he holds the serpent's tail and with the right hand, he forms the gesture of reassurance (abhayamudra).

The serpent, on the head of whom rests the left foot of young Krishna, is called Kaliya and he lived in the river Yamuna. Once it was brought to Krishna's attention that the reptilian titan was polluting the waters of the river which made it hazardous for everybody else. So Krishna decide to teach him a lesson and after subduing him performed a victory dance on his hood to the amazement of all inhabitants of Braj. Krishna right hand reassures both, the inhabitants of Braj and the devotees who behold the picture. The name of the serpent Kaliya (Kala) makes this a dance of victory over time and death as well.

Done only in two shades of colours, this attractive work shows an aptitude for colour and design, plus talent and skill.