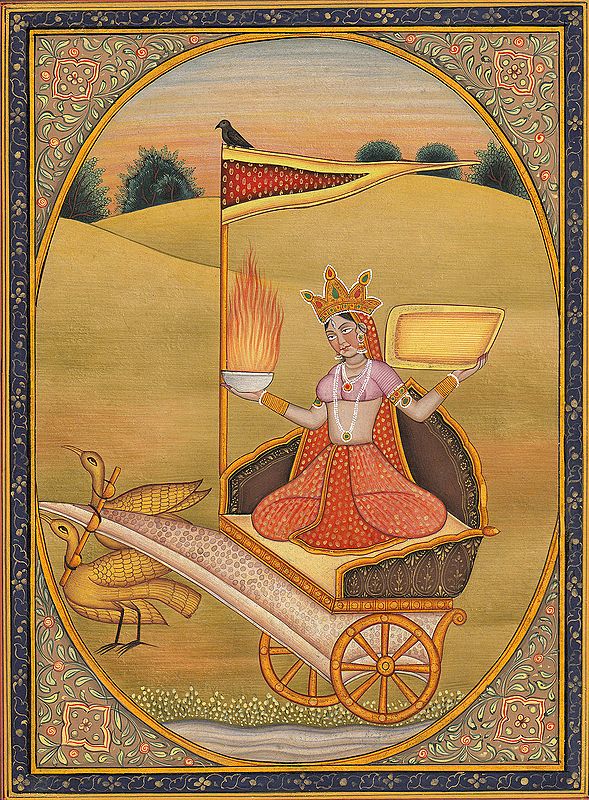 $155
Quantity
Notify me when this item is available
Dhumawati is ugly, unsteady, and angry. She is tall and wears dirty clothes. Her ears are ugly and rough, she has long teeth, and her breasts hang down. She has a long nose. She has the form of a widow. She rides in a chariot decorated with the emblem of the crow. Her eyes are fearsome, and her hands tremble. In one hand she holds a winnowing basket, and with the other hand she makes the gesture of conferring boons. Her nature is rude. She is always hungry and thirsty, and looks unsatisfied. She likes to create strife, and she is always frightful in appearance.

The legend behind Dhumawati's origin says that once, when Shiva's spouse Sati was dwelling with him in the Himalayas, she became extremely hungry and asked him for something to eat. When he refused to give her food, she said, "Well, then I will just have to eat you." Thereupon she swallowed Shiva, thus widowing herself. He persuaded her to disgorge him, and when she did so he cursed her, condemning her to assume the form of the widow Dhumawati. This myth underlines Dhumawati's destructive bent. Her hunger is only satisfied when she consumes Shiva, her husband and who contains within himself the whole world. Ajit Mookerjee, commenting on her perpetual hunger and thirst, which is mentioned in many places, says that she is the embodiment of "unsatisfied desires." Her status as a widow itself is curious. She makes herself one by swallowing Shiva, an act of self-assertion, and perhaps independence.

The crow, which appears as her emblem atop her chariot, is a carrion eater and symbol of death. Indeed, she herself is sometimes said to resemble a crow. The Prapancasarasara-samgraha, for example, says that her nose and throat resemble those of a crow.

The winnowing basket in her hand represents the need to discern the inner essence from the illusory realities of outer forms. The dress she wears has been taken from a corpse in the cremation ground. She is said to be the embodiment of the tamas guna, the negative qualities associated with lust and ignorance. She is believed to enjoy liquor and meat, both of which are tamsic. Dhumawati is also interpreted by some Tantra scholars as "the aspect of reality that is old, ugly, and unappealing. This is further corroborated by the fact that she is generally associated with all that is inauspicious and is believed to dwell in desolate areas of the earth, such as deserts, in abandoned houses, in quarrels, in mourning children, in hunger and thirst, and most particularly in widows.

Dhumawati - The Widow Goddess, with her Yantra (Madhubani Painting on Hand Made Paper)

Wisdom Goddesses : Mahavidyas and the Assertion of Femininity in Indian Thought (Article)