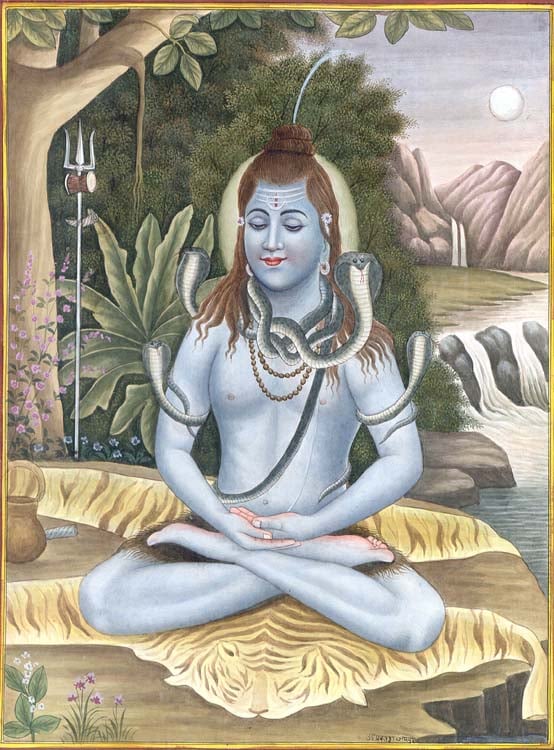 The Emergence of the Ganga on the Earth

$135
Quantity
Notify me when this item is available
This highly idealised vision of Lord Shiva is his votive representation, which, besides being an art piece for a drawing room wall, is also an object for a domestic shrine. For further elevating its votive sanctity, the artist has assimilated with his rendition a number of auspices, the emergence of the Ganga, banana plant, Banyan tree, Mallika flowers and a moon lit night. He has a couple of Mallika flowers on his matted hair also. Lord Shiva is wearing the beads of Rudraksha, the divine seeds born of Shiva's own being and hence most auspicious. The Padma Purana acclaims that the drops of sweating, which emitted from his body when he fought against Tripura, the Three Cities, and annihilated them, had turned into Rudraksha and hence the Rudrakshas have the status of Shiva's relics and manifest him materially. Being born of righteousness, that is, during the war of the righteousness against the unrighteousness, the Puranic literature named them dharma-vindus, or the drops of righteousness.

The landscape, comprising of a fast flowing river, multi-hued mountains, the moon lit night, a glowing sky, massive trees, dense thick green shrubs, flowering and fruits bearing plants, though a little conventionalised, is exceptionally vivid and elaborate. The artist has most skillfully discovered his variants in one and the same thing sometimes by colour shading, colour variations, light and shade effects and sometimes in various forms of the same object. The mountain range just below the moon has a vertical rise and a variously shaded brown tint; the rocks in the centre, which the current of the Ganga divides into three parts, is deep black, though with the effect of moonlight it has lighter spots also. This hill part has a descending slope or fall; and the hill part just behind Lord Shiva has a flat formation and a colour, which is different from both. The same happens with the water of the sacred river. Initially it is brownish, in the central part it turns into white and towards the lower end it is blackish green or greenish black. On most of the objects the moonlight has its rhythmic effect.

The ash-smeared form of Lord Shiva is, however, the central glow and glory and the emergence of the Ganga the central theme of the painting. Shiva's basic golden complexion, with the effect of the Kalakuta, the poison which he consumed during the ocean churning for protecting the earth and all her creatures from the destruction that it could plunder, and due to the layer of ash, has turned into silver grey with bluish tint. His throat, where stays the Kalakuta, has around the neck a ring of deeper blue giving him the name of Neelakantha, or the Blue Throated One. He is seated in exact padmasana posture, as it has been specified in Indian iconography- cross-legged, the lotus petal like feet turned upside and the both palms placed on each other transmitting, like an antennae, the cosmic energy and all its secrets into his being. Thick locks of his matted hair scatter over his neck and shoulders and a number of cobras girdle around him. He is wearing elephant skin around his waist just like a short loincloth. His drooping eyes, serenity and deep composure enshrining his face, his close lying tumara, the pot made from a gourd, and the far pushed trident and damaru suggest that he is in meditation, that is, in his Mahayogi aspect. The emergence of the Ganga is the prime theme of the rendition. After the rigorous penance by Bhagiratha Ganga agreed to emerge on the earth and redeem his sixty thousand ancestors, but she warned him that the earth could not bear her mighty current. On her suggestion, Bhagiratha persuaded Shiva to take and hold her into his hair and release her gradually, disciplined and controlled. The Ganga thus emerges from the Svargaloka first onto Shiva's matted mighty hair and then Shiva lets a part of it emerge upon the earth and holds its rest into his coiling hair. A streak of water, obviously the Ganga, shooting off Shiva's hair, turns into a huge river. The painting blends in Shiva's iconography many of his manifest forms but the most elaborate and prominent is his Gangadhara aspect.