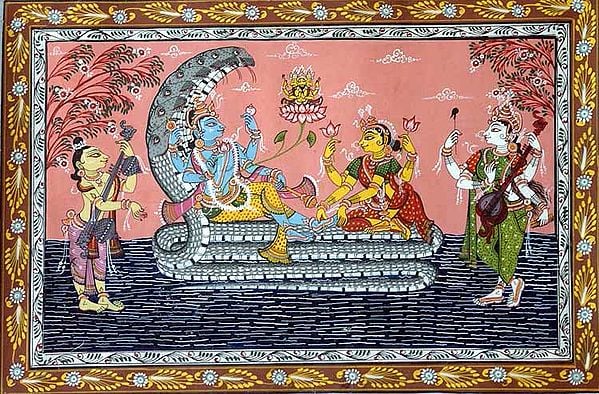 Lord Vishnu with Lakshmi on Sheshnag

Fair trade
Vishnu happens to be one of the most prominent Brahmanical Hindu gods with numerous iconic manifestations and widespread artistic representation to his credit. One of these forms show him reclining on the body of the primeval serpent Ananta or Sheshanaga in the oceanic waters. This image is popularly known as the Sheshashayi image.

Four-armed, he holds a conch shell (shankha), wheel (chakra), a mace (gada) and a lotus (padma). From his navel emerges a lotus stalk ending in a fully bloomed lotus on which is shown seated Lord Brahms. Vishnu is a colossal lord of exquisite beauty-beaming like the glowing sun and his eyes are like a lotus in bloom. His head is adorned with a golden crown which is radiant in color and majestic in appearance. There is a tulsi garland around his neck. he is also embellished with necklaces, waistband, armlets and other jewelry befitting his magnificent personality.

Lakshmi is the closely attached wife of Vishnu. She is an image of eternal youth and peerless beauty, what with dark, doe like eyes. Lakshmi is lovingly caressing Vishnu's feet. They are engrossed with each other judging by the engrossed glances they exchange.

Sheshanag's protective hoods are drawn in perspective as also Lakshmi and Vishnu's bodies but their heads are in profile. the curving hoods of the Sheshanag break the elemental horizontality of the reclining Vishnu. The painter's refinement is fully revealed in the delicate flowing rhythmic outlines of the snakes hoods linked with the flow of Vishnu's body, picked up by Lakshmi who holds his bent leg resulting in the flowing rhythm continuing thorough her semi-cross-legged posture. The direction of the curve of the lotus stalk and the petals as Brahma's seat provide a contrapuntal note.

On either side of Vishnu and Lakshmi are Narad and Saraswati waiting attendance. Narad, with his hair knotted on top hold his vina in his right hand. Saraswati, the goddess of knowledge, waiting on Lakshmi is resplendent in a crown and jewelry from head to toe. She holds a vina too. Her body posture is graceful with hands in the 'nritya mudra'.

This painting has a soft treatment and an agreeable synthesis between outlines and inner modeling so that independent lines are not so conspicuous. The figures are delicate and weightless. In all, the painting is reposeful and calm.