Marriage-Rituals and Other Related Aspects of Rajput Princely Life

$255
Quantity
Notify me when this item is available

Fair trade
This large scroll – essentially a Phad-painting, margins on all four sides in red and with border consisting of white flower and white leaf motifs, rendered alternately against a black background, is a part of an early art tradition prevalent since long time in India especially the Western Rajasthan including Gujarat. Appropriately suited to travelling business communities, Buddhist and Jain in particular, the Buddhist banners and scrolls, as suggest those recovered from Central Asian sites, seem to have begun pouring in from around the fourth century itself. The tradition of scrolls depicting Jain themes does not go back so far but it seems that the seventh/eighth century Gujarat and western Rajasthan had some kind of scrolls used for serializing Jain themes : twenty-four Tirthankaras, ten days long Paryushana-parva rituals, blissful experiences of seven heavens, and tortures of seven hells, all themes that better suited to a scroll-format. One of the earliest Jain scrolls from fourteenth century is reported from Jagdish-Kamala Mittal Museum, Hyderabad. It has embroidered on it ten rituals of the ten days long Paryushana-parva.

About five feet long, this scroll has been divided into nine variously sized compartments portraying rituals related to the marriage of a Rajput nobleman and some of the aspects of the post-marriage life. The topmost compartment represents Ganesha-sthapana – consecration of Lord Ganapati for accomplishing everything without obstruction. All Hindu rituals and auspicious acts, marriage being the foremost, begin with Ganesha-sthapana. As is the established tradition, ladies of a house observing or celebrating a rite go to a Ganapati shrine and after due adoration invite the elephant god to come to their house and preside over all rites to let them complete under his benevolence without any hindrance. As portrays the top compartment a noble lady is worshipping the four-armed Lord Ganesha. She offers him his favourite ‘laddus’ and invites him to her house and accomplish all marriage rites. The four-armed Ganapati carrying his battleaxe and a tray of ‘laddus’ just offered in two of his hands and the other two, lay elegantly, seems to grant the prayer with his upwards raised trunk. The compartment, second from the top, represents three noble ladies assembled behind a balconied pavilion symbolising one of the many ladies’ functions preceding a marriage. Festoons of mango leaves suggest the occasion.

The next three compartments represent the scroll’s principal theme : accomplishment of marriage rites. The upper one of the three, quite narrow, represents a band of musicians, one playing on ‘mradanga’ – a long double drum, another, on a ‘dhapali’ – flat drum, and the third, blowing a trumpet. Music being an essential component of any marriage the compartment comprises a part of the other two compartments that follow. The second portrays reception of the bridegroom and those accompanying him, that is, ‘barat’ – marriage-procession, and the third of them, accomplishment of final marriage rites. The bridegroom has come on an elephant, and the ‘barat’ on horses which is symbolised by a horse and its rider. A long prevailing custom uniformly practised in entire Rajasthan, the bridegroom is not allowed to enter the bride’s door unless he touches an auspicious ‘torana’ – a specially fabricated hanging, sometimes only a festoon of mango-leaves, with his sword. In the painting the elephant-riding groom is seen touching the ‘torana’ with his sword. Inside the main entrance there are ladies for welcoming them, one, symbolic of a group, with a sacred pot on her head, another, with lighted lamps in her hands, and a third in the centre, representing the young maidens, eager to have a look of the bridegroom and the grandeur of the barat. The third and the last in this group of three compartments portrays the marriage-ritual proper. The bride and her groom, holding each other’s hand, are seated under a ‘mandapa’ – temporary ritual pavilion, erected over rows of pots and thatched with green leaves. In between them is ablaze ritual fire for circumambulating around it and a priest with the text in hands is reading out sacred ‘mantras’ – mystic hymns.

The last four compartments illustrate some post-marriage routine aspects. In the first the royal personage is seated in his garden with his newly wedded bride enjoying hookah, a splendid one with towering build and an essential aspect of medieval feudal life. A female attendant has brought for them two trays of eatables and a pot, perhaps containing some drink. A banana plant behind them reveals the garden’s identity, and a festoon of mango leaves, their recent marriage. The next compartment represents the newly married royal lady enjoying a swing suspending on a stylized tree on which perch two parrot-type birds. Two maids are in attendance, one moving the swing, and other waving the fan. The third, and the second from the bottom, portrays the newly wedded ones playing ‘chaupara’ – the royal pastime. The ‘chaupara’ board has been painted in between but above them. A maid on their left and a male attendant on the right are waving large fans. Now the venue has shifted from the royal garden to the royal palace. The last and bottom compartment portrays the royal personage on his favourite elephant heading a procession. Ahead the elephant is his standard-bearer, behind him a minister and then the flag-bearer. Bananas define the venue as one outside the palace but the festoon of mango leaves, the continuity of theme and the unity of different compartments. 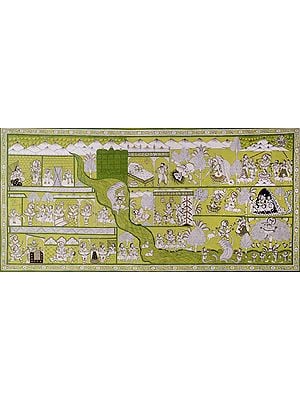 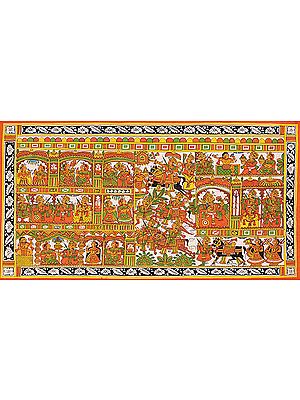 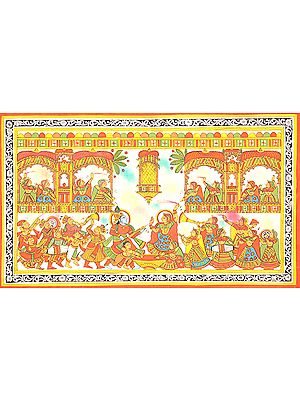 Phad Painting Folk Art of Rajasthan (Do it Yourself Educational Activity Kit)
Publisher Rimika Enterprises Pvt. Ltd.
$29
Out of Stock

Gods and Goddess of India: Durga
By B.K.Chaturvedi
$14

Our Picture Our Words (A Visual Journey Through The Women's Movement)
By Laxmi Murthy & Rajashri Dasgupta
$47.20
FREE Delivery
$59  (20% off)

A History of Rajasthan
By Rima Hooja
$79
Out of Stock

India on Television (How Satellite News Channels Have Changed the Way We Think and Act)
By Nalin Mehta
$23.20
FREE Delivery
$29  (20% off)